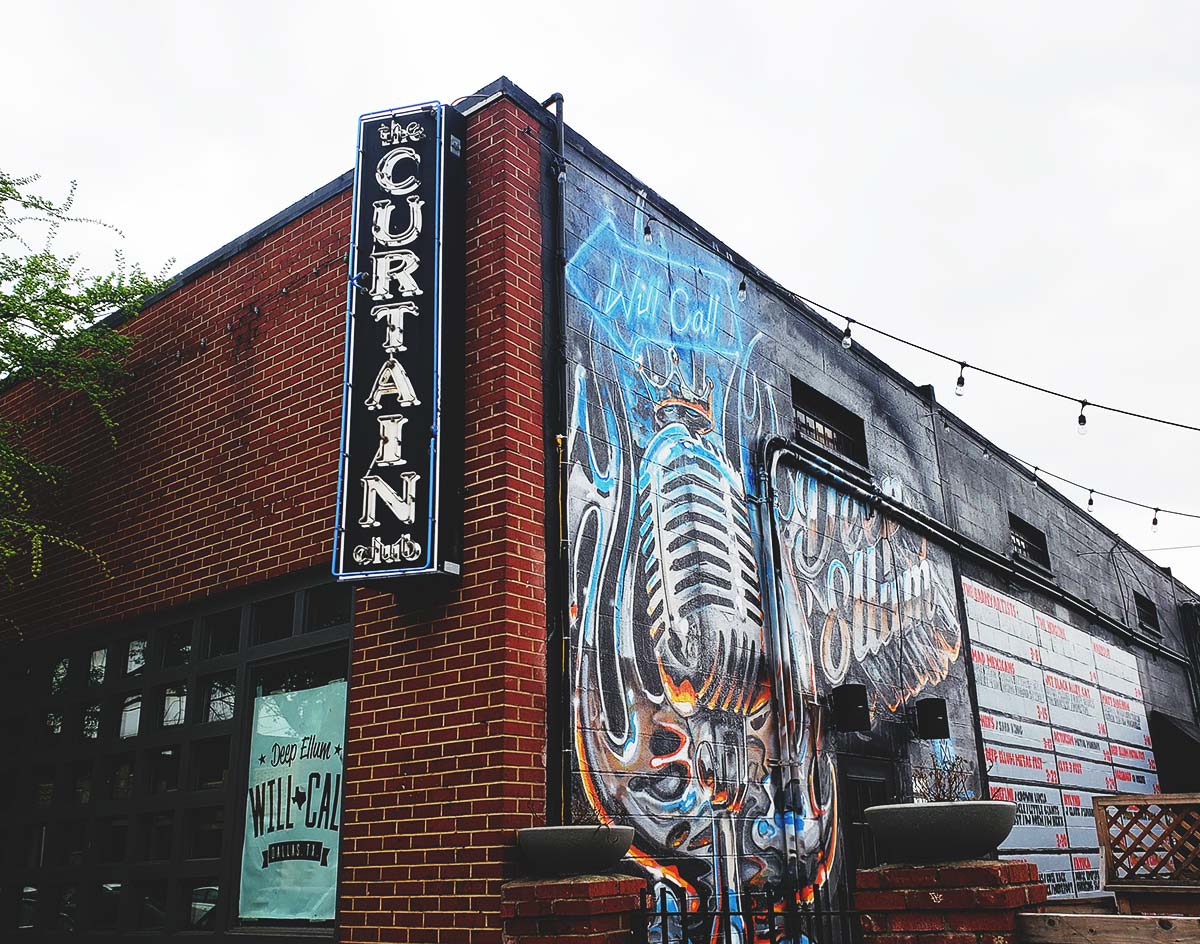 At The End Of June, The Oldest Continuously Operating Music Venue In Deep Ellum Will Close. Curtain Club Majority Owner Doug Simmons Tells Us Why.

On June 30, the Deep Ellum music venue Curtain Club will close its doors for good.

No, that might not exactly be breaking news at this point. Rumor of a possible closure had been circulating around the neighborhood for weeks by the time CultureMap got an employee at the venue to (anonymously) confirm on the record in mid-March what its staff had known — and been asked to stay mum about — for some time. But a post made to Curtain Club’s Facebook page that asked fans of the venue to share their favorite show at the club throughout the years was strange enough to get the media dogs in town to start sniffing around, and within a few days, Curtain Club’s Facebook page posted an update confirming that the reports of its impending demise were, in fact, quite true.

“It’s been a very difficult decision to make,” that note read in part. “The support of the bands and the local music fans during our time here has been overwhelming and humbling. Over the last 21 years, The Curtain Club has become much more than a venue to us. The relationships forged here have changed our lives. Fans became friends and friends became family. While the years have been filled with stellar performances, equally memorable have been the stories of the fans and supporters of this incredible local music scene… We’re honored to have shared in a small part of your lives. You’ve been a big part of ours.”

Reached by phone a few weeks ago, the venue’s majority owner Doug Simmons sounds just as somber as that Facebook post read. But he also admits that the writing had been on the wall for a while now for the his club, which he’s operated at 2800 Main Street since opening Curtain Club’s doors on New Year’s Eve in 1997.

“We haven’t really been losing money or making money,” the plainspoken Simmons says. “We’ve just been a break-even company for too many years in a row now. It’s been getting harder and harder to keep it afloat.”

So, when the North Carolina-based real estate development firm Asana Partners, which immediately became a major player in Deep Ellum by purchasing 28 properties from 42 Real Estate in the neighborhood in 2017, came calling to in 2018 to see if Simmons would be interested in selling the building he’s co-owned for two decades now to them, he felt obligated to at least listen to what they had to say.

If he completely owned the building himself, he says he would’ve politely declined Asana‘s inquiry just as he has every other one of the many developers he’s fended off over the years, among them Deep Ellum real estate juggernauts Westdale and 42. But with eight other owners in Curtain Club’s partner group to consider — most of whom Simmons says have never made a dime from the business beyond the return of their initial investment — he agreed to a meeting. He wasn’t expecting much to come from it, he says. He certainly wasn’t expecting Asana to make what he describes as “such a big offer — way, way over what we thought we were going to get” for the property.

He and his fellow owners accepted the deal. Had to, Simmons says. Asana’s offer was too high — far above and beyond any other offer Curtain Club had heard before. It would’ve been irresponsible, Simmons says, to say no. Plus, there were other attractive provisions in the agreement — including the fact that Asana said it wanted to keep Curtain Club on as a tenant for not just the agreed-upon-in-writing first year of the new property owners’ involvement, but for the foreseeable future.

And so the sale went under most people’s radar as Curtain Club continued its usual operations, just as a tenant — something it hadn’t done since its first year in operation, back before its ownership group bought the building outright in 1998.

Underreported as the ownership change may have been, it made a massive difference to the club’s operations. Asked if Curtain Club would’ve been able to last as long as it has without owning its building, Simmons lets out a hearty laugh before responding with a resounding “No.”

“We would’ve long been out of business if we didn’t own the property,” he says. “We remortgaged the place seven times throughout the years just to keep it afloat.”

It’s worth pointing out: Keeping Curtain Club alive for 21 years is no small accomplishment. As other legacy, long-running Deep Ellum venues like Trees, Club Dada, Prophet Bar and The Door either closed for stretches or moved to new locations, Curtain Club remained. While many in recent years have been all too keen to poke fun at at Curtain Club’s somewhat throwback reliance on traditional rock bands in its booking methodology — probably an unfair criticism as, in the last few years in particular, the club has started opening up its stage to outside talent buyers with broader tastes and established itself among the more hip-hop-friendly rooms in the neighborhood — there is pride to be had in being the longest continuously operating music venue located in the heart of Dallas’ best-known music neighborhood.

“Somehow or another,” Simmons says, “we always survived.”

Then, on Halloween weekend of last year, all that began to change. A fight broke out at the intersection of Main Street and Crowdus Street, right in front of the venue. Shots were fired. The police responded in full force. And, according to Simmons, Asana got scared off of its verbal agreement to let Curtain Club keep operating out of its space. Almost immediately, the property owners reached out and told Simmons that it had no interest in extending Curtain Club’s lease agreement beyond its end-of-June expiration date.

Regardless of his thoughts on the matter, Simmons says the plan now is for Asana to gut Curtain Club and its next-door sister venue — once known as Liquid Lounge, but operating as Will Call Bar since 2017 — and build it out into three separate, decidedly retail-oriented spaces. He laughs when noting that, for at least a little while anyway, that process might bring the rooms back to the same decrepit state they were in before Curtain Club began its build-out in the ’90s. He declines commenting on the record, though, about whether he’s been told that shunning bars and venues in favor of retail operations represents Asana’s overall plans for the dozens of Deep Ellum properties its portfolio now boasts. That said, a quick look at the way Asana operates in other markets reveals its clear preference for retails spaces over entertainment-focused ones.

For his part, Simmons says he has trouble even recognizing what Deep Ellum has become these days. He doesn’t necessarily mind it; he just says it’s not what it used to be. His own financial well-being in the wake of last year’s sale aside, he’s just not quite yet sure what to make of it all. He just knows that coming to terms with Curtain Club’s end hasn’t been easy.

“It’s definitely bittersweet,” he says. “But the bands that play here, the fans that come and the staff that work here — they’re all getting older. And our numbers just aren’t the same as they used to be back in the day.”

You’d never know that based on the way his phone has been ringing off the hook for the last month or so, though. Since posting that Facebook update confirming the closure, Simmons says he’s been overwhelmed by people reaching out to confirm that the news is accurate.

“More and more, as each day goes by, people are realizing it,” he says. “I just tell them, ‘Yeah, it’s true,” and when they hear it, they just can’t believe it.”

Given the club’s numbers in recent years, he’s unsure what to say to those people. The calls he appreciates most, though, are the ones made by bands that are reaching out in hopes of squeezing one last Curtain Club gig in before the club says goodbye for good in a few months. Those musicians have been instrumental, he says, in filling the venue’s few remaining calendar dates — something Simmons admits to enjoying again as he catches up with old friends and works toward planning a slew of send-offs for venue in advance of one final blow-out he’s working on for June 30, the final night of his lease agreement with Asana.

He’s also trying to figure out what the future holds for him. After two decades of running a Deep Ellum business, he says he shudders at the thought of leaving the neighborhood completely. He’s been talking to Westdale and other property owners about maybe opening up a neighborhood pub, or perhaps a small acoustic music venue, somewhere in the area. If not, he’s going to look at other Dallas neighborhoods for spots that fit that billing. If possible, he’d like to keep employing his longest-tenured staffers — especially bartender Paul Aguilar, who has worked at Curtain Club for 18 years now since starting off as a barback — as they’ve been an integral part of why the venue lasted has long in Simmons’ eyes.

“We’re looking and we’re hoping,” Simmons says. “We’re all kind of just wishfully thinking that we can stay in the neighborhood and continue on with… something. But we’re just not sure.”

Friday, June 7
Upon A Burning Body

Keep an eye on Curtain Club’s concert calendar and Facebook page for more details on the venue’s final shows as they are confirmed.