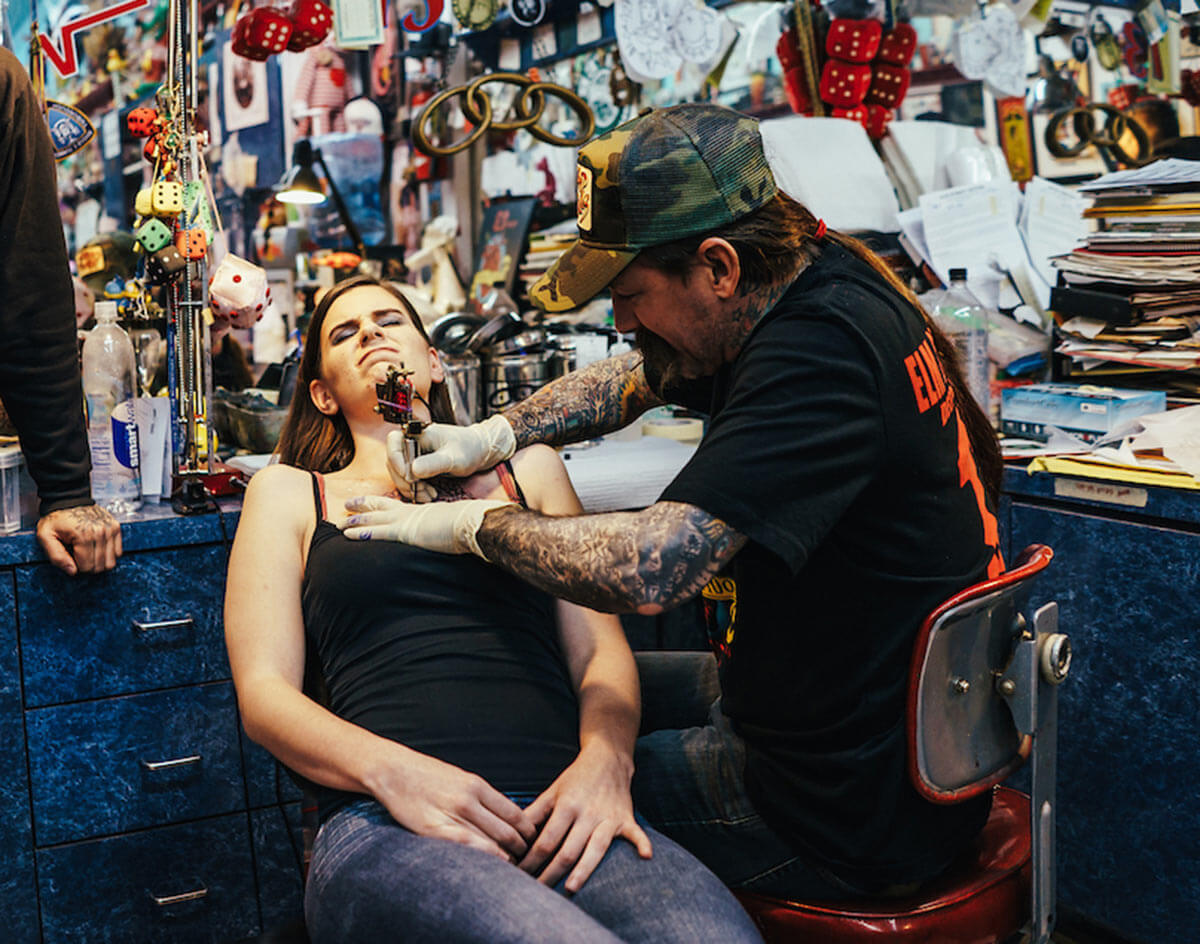 Get Inked Up At The Elm Street Tattoo & Music Festival, Rock The Suburbs At Richardson’s 27th Annual Wildflower Festival And So Much More.

Presuming you’re like most culture-consuming Americans out there, this weekend will mostly revolve around your plans to catch the series finale of Game of Thrones on Sunday night.

If you need help filling out the rest of your time off from the workweek — or, hell, if you’re looking for something to do instead of consuming the finale of what’s likely to be the last appointment-viewing television series of all-time — then, by all means, consult the below list of what’s happening around Dallas these next few days.

I mean, that’s literally why we’ve compiled it for you. — Pete Freedman

On Cinema at the Cinema Live at Texas Theatre
Tim Heidecker (Tim & Eric) and Gregg Turkington (not channeling his Neil Hamburger persona) bring a live version of their podcast to town, reviewing today’s films to an audience of dedicated GreggHeads and TimHeads. — Garrett Gravley

ZZ Top, Bad Company and Cheap Trick at Dos Equis Pavilion
Dallas mayor Mike Rawlings gave ZZ Top a special city recognition this week as one of his last acts in office. Even on this stacked lineup, the Dallas-tied act stands out. — PF

MURS at Ruins
MURS is a former member of the Living Legends collective, a current member of punk band The White Mandingos and, most notably, a successful rapper. His most recent album, A Strange Journey Into the Unimaginable, was released last year on Tech N9ne’s Strange Records Inc. label. — GG

Elm Street Tattoo & Music Festival at Trees
Once a year, the internationally acclaimed Dallas tattoo artist Oliver Peck flexes his celebrity and brings to town some of his favorite musicians and tattoo artists to town for a weekend-long celebration of tattoo culture hosted by his long-running Elm Street Tattoo parlor. The out-of-town tattooers will be plying their crafts at Trees all weekend long, and the musicians will take to neighboring stages. Since tickets to the concerts can be purchased separately, we’ll highly a few of them in this post, but be sure to hit the above link for the full schedule and for the full roster of visiting tattoo artists. — PF

Quaker City Night Hawks, Vandoliers and Convoy & The Cattlemen at Three Links
Three of the region’s hardest-rocking twang acts take to Links for an Elm Street Tattoo & Music Fest gig that should be nothing short of a ripper. — PF

Telegraph Canyon at Shipping & Receiving (Fort Worth)
One of the most popular North Texas bands eight or so years ago makes a rare appearance! — PF

SRSQ, Felt & Fur and Tidals at MASS (Fort Worth)
Synth-heads, heads to Fort Worth! — PF

Idles at Curtain Club (Sold Out)
The acclaimed British punks will perform one of the last sold-out shows booked by an outside promoter at this venerable Deep Ellum venue that’s slated to close at the end of June. — PF

Larry The Cable Guy at The Theatre at Grand Prairie
This guy got a catchphrase or something? — PF

Jonathan Tyler & The Northern Lights at Billy Bob’s (Fort Worth)
To love is to fly, which will not be how these Dallas favorites will travel to this gig. — PF

New Kids On The Block at American Airlines Center
All these year’s later, and they’re still hanging tough. — PF

Do214’s Five-Year Anniversary Party feat. Black Joe Lewis & The Honeybears at Statler Ballroom
Much props to our our hard-partying homies at Do214 for passing the half-decade mark! This event, headlined by the Austin-sprung blues rocker, caps three nights’ worth of Statler-hosted bashes the listings aces have thrown to celebrate the milestone. The Do214 squad doesn’t simply hype up the hottest happenings around town; that set clearly walks the walk, too. Cheers, y’all! — PF

Charley Crockett at Hank’s Texas Grill (McKinney)
The now-Austin-based, Davey Crockett-descended Americana act who caught fire while living in Dallas tackles the wild frontier of the north Dallas suburbs for a change. —  PF

Wildflower Festival at Galatyn Park (Richardson)
Wanna know how this annual suburban music festival has lasted a whopping 27 years? By exceeding expectations rather than setting unrealistic ones. Opening night of this three-day affair features sets from Neon Trees, RATT, Quiet Riot and Bowling For Soup. Yes, for real.

Dave Matthews Band at Dos Equis Pavilion
Must be summertime if these guys are rolling through. — PF

Terminator 2 at Andy’s Bar (Denton)
Given that drummer David Saylor lives in Colorado, the Denton-based noise and doom outfit maybe plays DFW once a year these days. — GG

Dirty River Boys at Blue Light
The El Paso-sprung Texas country favorites are a fine blend of crass and class, and it’ll be right at home on the Blue Light stage, which was expanded from Lubbock to Deep Ellum late last year specifically to cater to such acts when they rolled through Dallas. — MS

Elm Street Tattoo & Music Festival at Trees (and other venues)
Just as the shows continue at Dada and Links, the inking continues at Trees. — PF

Knife Knights at Ruins
Ishmael Butler from Digable Planets and Shabazz Palaces is in this group, which is embarking on its first North American tour, in support of its debut album 1 Time Mirage, which was released via Sub Pop. — GG

Riverboat Gamblers, Peelander-Z, Daikaiju, From Parts Unknown at Three Links
The best live band out of Denton is joined by two similarly punk-oriented touring bands also known for theatrical antics when playing Three Links, which has become the clear home base for each of this night’s three performers. Do you even have to ask? Of course this is another Elm Street Tattoo & Music Fest joint. — PF

Elaina Kay’s Cornbread & Country at Tate Farms (Rockwall)
Area country performer Elaina Kay plays host at this event, which offers free food and free drinks for anyone who buys their way in to see Kay play on a bill alongside fellow local up-and-comers Vincent Neil Emerson, Frankie Leonie, Jenna Clark and others. — PF

Tyler Hilton at Prophet Bar
Not one of those Hiltons, this one’s a singer-songwriter who popped in the early ’00s. — PF

Buffalo Tree presents Care For The Caravan featuring the Polyphonic Spree at Granada Theater
This benefit show headlined by The Polyphonic Spree and also featuring performances from Cure For Paranoia, Tiarra Girls and Cry Havoc Theater Company is putting its proceeds toward helping the refugees at the U.S.-Mexico border near McAllen feel a little more human. On Sunday night, organizers will throw a similar event in Austin. Then, on Monday, they’ll head to McAllen and drop off their collections. — PF


Son of Stan, Ruff Wizard, Svenny Baby and Modern Modem at Double Wide
Not that anyone ever needed an excuse to rage at the Double Wide, but this local bill of enjoyable indie rock outfits is a good one. — PF

Wildflower Festival at Galatyn Park (Richardson)
Wanna know how this annual suburban music festival has lasted a whopping 27 years? By exceeding expectations rather than setting unrealistic ones. The second night of this three-day affair features sets from Fitz & The Tantrums, Grand Funk Railroad and Blue Oyster Cult, among others.

Elm Street Tattoo & Music Festival at Trees (and other venues)
Last call for tattoos at this annual affair! — PF

Listener at Club Dada
A few years ago, people really dug post-hardcore music that infused spoken word elements and, as a result, bands like La Dispute and Touche Amore got huge. Listener is sorta in that wheelhouse, too. Joining them on this run will be Birds in Row, who are still fresh off a crusher of a tour with Neurosis and Converge. — GG

Helado Negro at Curtain Club
Helado Negro is the project of Florida songwriter Roberto Carlos Lange, whose sixth full-length LP This Is How You Smile was given Best New Music honors by Pitchfork upon its release. After a decade-long career that has included tours with Beirut, Mitski, Chicano Batman, Cuco and Sylvan Esso, Lange is now performing his first Dallas headlining gig. — GG

The Damned Things at Gas Monkey Bar N’ Grill
Anthrax’s Scott Ian, Every Time I Die’s Keith Buckley and Fall Out Boy’s Joe Trohman comprise this — dare we say it? — supergroup. Buckley, by the way, is also one of the founders of the online satire site The Hard Times. — GG

John Cusack presents Say Anything at Majestic Theatre
No word yet on if he’s bringing a boombox. — PF

Pun Competition at Strangeways
An afternoon filled with intentional groaners? Sign us up! — PF

Toad The Wet Sprocket and Deep Blue Something at House of Blues
I guess touring is the one thing ’90s bands still got. — PF

India.Arie at The Theatre at Grand Prairie
The neo-soul performer stops through the region in support of her new album, Worthy. — PF

Avant To Leave This Planet at Tradewinds
Just the latest installment of the esoteric local variety show that embraces outsider quirks. — PF

Wildflower Festival at Galatyn Park (Richardson)
Wanna know how this annual suburban music festival has lasted a whopping 27 years? By exceeding expectations rather than setting unrealistic ones. Closing night at this three-day affair is headlined by The Jacksons. Yes, those Jacksons.