White Noise: Erykah Badu & Dallas Symphony Orchestra To Team Up For One Night Only. 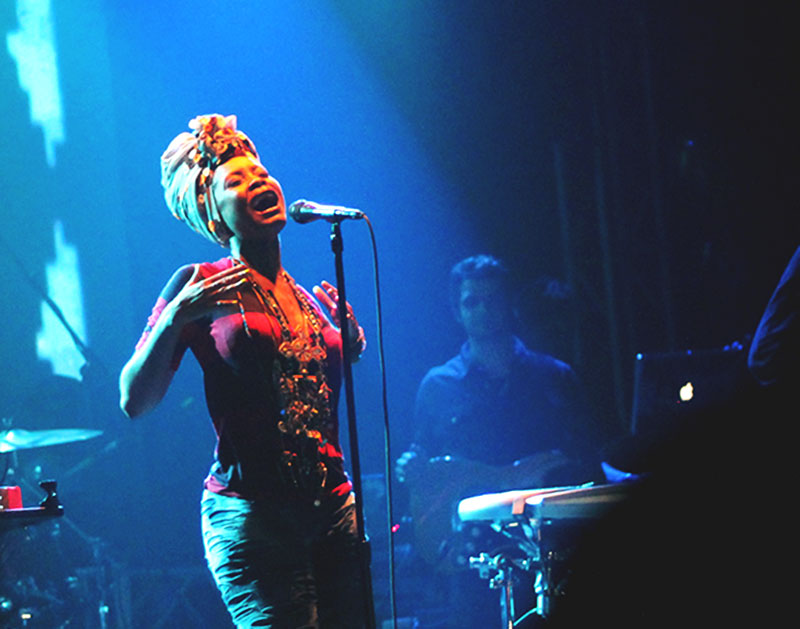 Erykah Badu & The DSO Team Up For One Night Only, Mayor Rawlings Gives ZZ Top A Special Recognition, 10k.Caash Chills With Chance The Rapper & More.

It’s always cool when the Dallas Symphony Orchestra links up with its local pop luminaries — like when it backed St. Vincent for a one-off date back in 2015. Now it’s Erykah Badu‘s turn to have the honor.

On June 21, the orchestra will back Badu for a one-night only event at the I.M. Pei-deisgned Morton H. Meyerson Symphony Center, with tickets ranging from $60 to $160.

Of course, that’s not all the DSO is up to these days. The surprisingly busy outfit recently announced hiring Katharina Wincor as its assistant conductor, then just this week revealed that her orchestra will be backing Nia Imani Franklin, the classically trained opera singer and arts advocate and also the pageantry circuit’s reigning Miss America, at four park concerts this year. Joining Franklin will be 10-year-old Dallas vocalist Skye Turner, who was featured on the Steve Harvey Show. Head here for the details on these free performances.

Plenty of locals are scoring cool gigs these days, too: Vault Dweller (whose song “Bad Gateway” we listed as one of our Songs of the Day), who will soon play Maryland Deathfest in Baltimore, along with other revered metal names such as Voivod, Deicide, D.R.I., The Accused AD, Dropdead and others. Meanwhile, Dallas DJ Pass the 40 won a vote to play last weekend’s Electric Daisy Carnival in Las Vegas, which featured EDM behemoths such as David Guetta, Kaskade, Diplo, Cash Cash, Deadmau5 and others.

In bolder-faced name gig news, the Jonas Brothers and Kacey Musgraves are both set to play the 2019 Citi Concert Series on The Today Show, with the former slated to play on June 7 and the latter set for July 19. It’s not like these artists need the exposure or anything, but if you want to see some DFW-affiliated acts dominate the Big Apple and network television soon, there’s your chance.

If you’re more wanting a story about local artists getting possible exposure on a national platform, cheer for Fort Worth’s Court Hoang and Stephenville’s The Blank Stairs, who were recently featured on NPR’s 2019 Tiny Desk Contest montage, which means they will be finalists for consideration to be on the show, we think?

Whether you think that’s huge or not, keep in mind that NPR’s Tiny Desk Contest helped launch the careers of such acts as Tank & The Bangas, Fantastic Negrito and Hobo Johnson, to name a few.

Speaking of internet videos, 10K.Caash posted an Instagram video of him hanging out with none other than Chance the Rapper himself. Yes, the recent Def Jam signee is indeed on one these days:

Jealous as we are that the creator of The Woah gets to chill with Chano, we’re perhaps even more jealous that Post Malone got his own likeness channeled into a Funko Pop! Vinyl Figure. That’s essentially one step below having a wax figurine at Madame Tussaud’s, and one step above being given a key to the city.

While ZZ Top haven’t exactly achieved the latter with the City of Dallas, Mayor Mike Rawlings did use his bully pulpit to formally recognize the band for achieving their half-century anniversary, which the band celebrated on Friday at the Dos Equis Pavilion with Bad Company and Cheap Trick.

Now that we hyped you up with all this good news, we’re sorry to destroy this lofty house of cards of optimism we have built up and remind you that Curtain Club is still closing. You can say your goodbyes on June 30 as Drowning Pool has been formally tapped to bid the decades-old room an emotional bon voyage.

Just because something dies doesn’t mean it can’t be revived, though: After discovering last week that Boris would be playing Rubber Gloves Rehearsal Studios’ weekend-long re-opening celebrations up in Denton on August 24, we now know that Riverboat Gamblers will headline things on August 23, the venue’s first official night back in business.

Speaking of new venues: If you read our food- and drink- focused The Spread column last week, you’d know that Deep Ellum honky tonk Mama Tried is already expanding to a second location and gearing up to soon open some new digs in Irving as part of the Toyota Music Factory complex.

Meamwhile, D Magazine reports that venerable Dallas cocktail guru Lucky Campbell is set to open up a new cocktail lounge in Uptown called Clover Club that promises to heavily feature live music — probably in a vein similar to the New Orleans-themed vibes of the new Bishop Arts spot Revelers Hall that we mentioned a few weeks back.

Also earning cool shine of late are The Toadies whose song “Plane Crash” is prominently placed in the new Amy Poehler and Mya Rudolph Netflix movie, Wine Country. The song is used during a scene focused on the great tunes of yesteryear, fittingly. Meanwhile, while you were getting hyped for the series finale of Game of Thrones, The Good Fight on CBS All Access featured Welsh actor Michael Sheen singing The Silver Jews‘ “How Can I Love You (If You Won’t Lie Down).” Yes, David Berman, the Addison-affiliated founder of Silver Jews, seems to have been keeping busy lately even a decade after the band’s dissolution. Why, just last week, he announced a new project titled Purple Mountains, and even premiered a new video for the band’s new single “All My Happiness is Gone.” Check it out:

Wanna see them live? You’ll have to travel some: Purple Mountains just got announced as a lineup addition for Raleigh, North Carolina’s tenth annual Hopscotch Festival, where the new group will be playing alongside Jenny Lewis and ex-Band of Horses guitarist Tyler Ramsey.

You don’t have to leave the comfort of wherever you are to watch Sudie’s new Texas Theatre-set music video for song “Played” that also just dropped this week:

Finally, we have to end this week’s column on a sad note.

Last week, former Poor Vida co-founder Donald Benavidez allegedly shot two of his former co-workers at the offices of the prominent Dallas audiovisual rental company Showtech Productions. Benavidez is now facing two counts of aggravated assault with a deadly weapon. He is accused of shooting his former boss, who was shot multiple times in the face, neck and torso, and an unidentified man that was within proximity of the attack. Reports state that the second man may be paralyzed as a result of the attack. Both victims are in critical condition as of this writing, and Benavidez remains in Dallas County jail on a $200,000 bond.

We wish the victims a swift recovery, and our thoughts are with them and their loved ones as they navigate through this difficult chapter.

Cover photo of Erykah Badu by Pete Freedman. Got a tip for White Noise? Email us!