The Spread: Deep Ellum Pizza Gets Even More Serious. 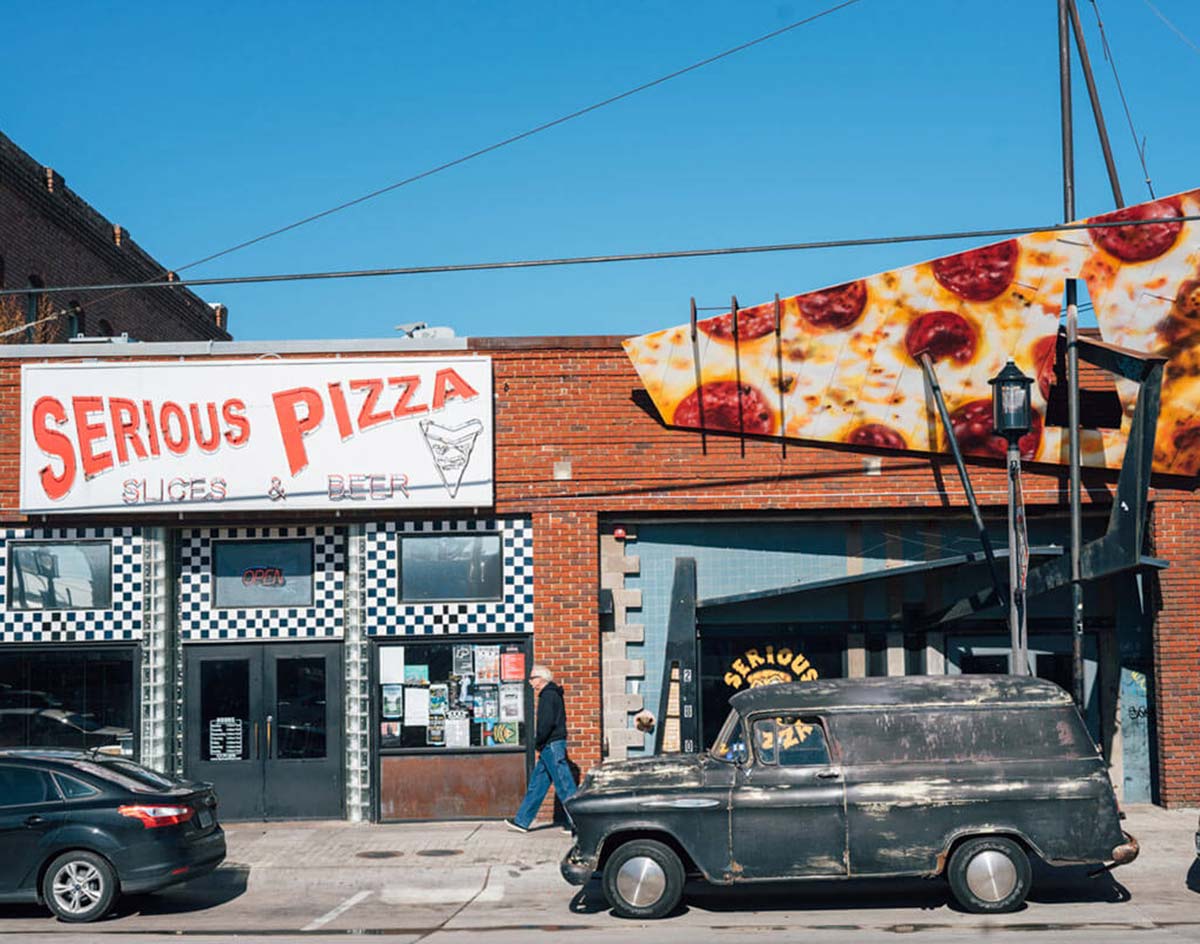 A Deep Ellum Pizza Joint Gets Even More Serious, Mama Tried Opens A Toyota Music Factory Outpost, Oak Cliff Loses Some Of Its Juice And So Much More!

Sounds like the infamous Deep Ellum pizza haunt Serious Pizza is about to get even more serious.

This week, Eater reports that the restaurant — renowned for its over-the-top pizza slice and pie sizes — has been acquired by Milkshake Concepts (the minds behind Stirr and Vidorra) with the stated goal of enhancing and improving upon the already popular venture. Already, Milkshake Concepts has taken over operations and branding. Next up are plans to renovate the space and instilling a delivery service in the future.

The original owners aren’t completely out; they will be staying on to help oversee the creative and culinary aspects of the brand. As of now, lease terms are under negotiation, with renovations not expected to start for a few months.

Be on the lookout for more details as this story unfolds.

Turns out, though, Serious isn’t the only Deep Ellum concept with legs. Less than a year after opening, CraveDFW is reporting that Brooke Humphries‘ honky tonk Mama Tried is now set to open its second location. The new outpost of the Nashville-style music venue and eatery will be located in Irving’s Toyota Music Factory concept at what CraveDFW describes as a “grand corner” near the Texas Lottery Plaza stage, where it will host live music performances of its own alongside comfort food staples. Look out for an opening in August.

In other expansion news: Royal Blue Grocer is taking on Oak Cliff! CultureMap notes that the Austin-born boutique grocery store is opening its newest location at 634 W. Davis Street in the former Bolsa Mercado location and that it will be inspired by the area, keeping with the company’s trend of neighborhood-themes stores. Still, expect familiar Royal Blue elements such as grab-and-go dishes, a coffee bar that serves Stumptown brews and a curated selection of grocery offerings tailored for the urban shopper. Along with its two operational locations in the Dallas area (one in Highland Park Village, the other in Downtown Dallas), the Davis Street outpost is the brand’s second store currently in development (along with the one coming to the Trammel Crow Center on Ross Avenue), with no word yet on a projected opening date.

Speaking of Oak Cliff: Local Press + Brew quietly shuttered its doors. The Dallas Observer reports that the cold-pressed juice company recently closed both its Beckley Avenue and Victory Park locations, citing increased production costs and a new tenant moving into the Oak Cliff space. But not all hope is lost for Local fans, as its juices will still be available at retailers and pop-ups throughout the city. In the meantime, the shop’s sister venture, Local Moto + Provisions, is moving to East Falls to Share a building with DFW Speedshop, as its owners scout for new locations for housing its juice-exclusive operations.

On the barbecue wire: Greenville Avenue loses one barbecue joint and gains another, according to CultureMap. The short-lived Louie King BBQ will be replaced by a concept called Smokin’ C’s BBQ, which is the restaurant is the brainchild of the folks behind LG Tapas and Ross & Hall. The new spot will focus on Central Texas-style ‘cue, and its menu will feature standards such as brisket, pulled pork, sausage, beef and pork ribs, pork belly burnt ends and something called “Texas Twinkies” (read: bacon-wrapped jalapeños stuffed with brisket and cream cheese). An opening is projected for June 1.

Back in Uptown, a newcomer called Te Deseo is coming to the Hardwood District. Located at 2700 Olive Street, CulureMap says the restaurant will serve high-end Latin cuisine with a bar program — but no menu details are currently available. Still, expect a strong nightlife component, complete with indoor and outdoor seating, plus a rooftop. An opening is slated for this summer.

A little farther over in Victory Park, GuideLive is raving about the few-weeks-open-now Hero by HG Supply Co., which it calls a sports fanatic’s paradise. The 25,000-square-foot space at 3090 Olive Street in Victory Plaza features an expansive menu by chef Danyele McPherson that includes familiar dishes from HG Supply Co. and Gung Ho made out of its two kitchens. The space also boasts six bars, 54 TVs and even its own Bullzerk store. There’s also an arcade for post-season lulls or the non-sports inclined. Hero is open from 11 a.m. to 10 p.m. Monday through Thursday, from 11 a.m. to midnight on Friday, 10 a.m. to midnight on Saturday, and from 10 a.m. to 10 p.m. on Sunday.

Finally, in craft beer news this week, some local breweries are bulking up their can offerings. The Dallas Observer notes that Rahr & Sons recently released 19.2-ounce cans of its Adios Pantalones and Dadgum IPA, joining Deep Ellum Brewing Co., Community Brewing Co. and Legal Draft Beer Company in the canning trend. Additionally, Legal Draft has plans to release another brew in the 19.2-ounce size later this year.