The Texas Theatre’s Movie Trailer Parodies Are A Delight. 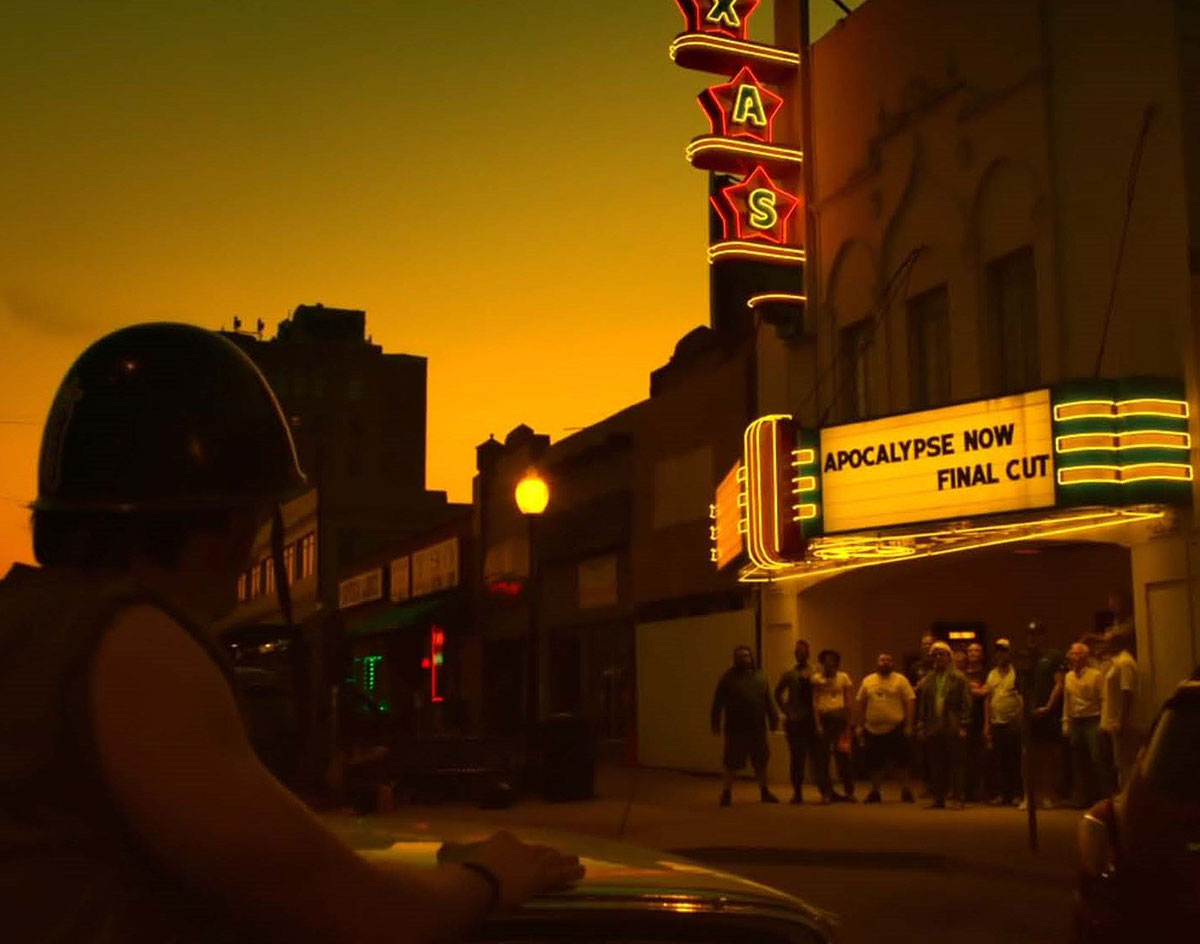 Far More Than The Promos For Upcoming Screenings That They’re Intended As, These Productions Are Carefully Crafted Testaments To The Staff’s Love Of Cinema.

The Texas Theatre is easy to love.

The historic Oak Cliff movie theater just has an inherent charm — and not simply because its iconic exterior has become a mainstay on local Instagram feeds. Its penchant for experimentation — in its programming and its snack options (it helped me discover the magic of popcorn topped with Frank’s Red Hot sauce) — also helps set it apart from the rest of the pack.

A prime example of both its charm and its taste for experimentation can be readily seen right before many of the movies shown on the Texas Theatre’s big screen in the form of the slick and cheeky trailers it regularly produces to promote special repertory screenings it books to its theater.

Is latest triumph on this front is a Jefferson Boulevard-set send-up of Apocalypse Now: Final Cut, the 4K restoration of which the theater began screening earlier this week, with additional showings still set to come both this weekend (August 24 and 25) and next (August 31).

Created by the Texas Theatre staff — most of which are filmmakers or involved in film production in some capacity on their own — plus an additional roster of area filmmaking friends, these clips impressively walk a fine line between homage and parody. And they can often take a lot of work.

“The Apocalypse Now one took some doing,” Barak Epstein, co-owner and operator of the theater, says with a laugh. “We had Dallas colorist legend Steve Franko do the creative grading and then [composer, director and theater co-owner] Jason Reimer did a 5.1 surround [sound] mix.”

The theater’s trailer tradition — as well as the penchant for perfection in its creation process — dates back to 2014, when Epstein was looking for a way to promote both a screening of Wes Anderson The Life Aquatic and the general attitude of the theater he helped reopen in 2010. He settled on shooting a sweded trailer — something he and his partners had been talking about doing since opening their theater’s doors.

“I was always obsessed with the ‘let me tell you about you my boat’ scene in The Life Aquatic and had talked about doing a Texas Theatre version of it once we re-opened the theater,” Epstein says. “The only thing was, I wanted to shoot it on an Aaton camera with 16mm film like [the main character Steve] Zissou does in the film — so that one took some time and planning, too.”

The positive response to that trailer convinced the Texas Theater team to keep going with the idea, turning it from a one-off to a signature of their brand.

In the years since, they’ve gone on to tackle John Carpenter’s paranoid classic The Thing…

…and even add levity to the creepiest scenes from David Lynch’s Lost Highway.

Consistently across each effort, the crew behind these efforts has proven itself capable promoters of the theater’s offerings while also showcasing a breadth of film knowledge as well as an impeccable penchant for comedic writing and timing.

Perhaps the coolest aspect of these promos, though, is that so many of these dramatic, humorous or even scary shoots also highlight the enduring allure of the Jefferson Boulevard drag upon which the theater sits — one of the last commercial strips in the city that doesn’t feel homogenized to look like every other one of its counterparts.

“The street has so much history and character and goes back so far into Dallas lore,” Epstein says, noting the trailers’ use of Jefferson landmarks and neighbors like Charco Broiler and Small Brew Pub in its shoots. “We like mixing the old with the new.”

That’s part of why these productions can take as long as a month to create. Beyond the various locations, special effects and props that they can sometimes require, Epstein says his team is also careful to be respectful of all parties involved in the process.

The effort is all worth it, though. The Texas Theatre’s trailer productions are love letters to movies and the creative process alike, and it’s truly endearing to see the team behind such a beloved institution so regularly showcase their own creativity and passion.

So it’s reassuring to hear Epstein says that, while the Apocalypse Now one took a lot out of his team, there will eventually be more coming in the wake of that one. .

“We will recuperate now, then maybe plan something new for the Halloween season,” he says. “All the trailer ideas are based on Texas Theatre programming and, at the end of the day, are promotional pieces to get people to come out and see these films in the theater. But hopefully they also highlight the brand of what the Texas Theatre is all about.”

For what it’s worth, we actually think they do that quite beautifully.