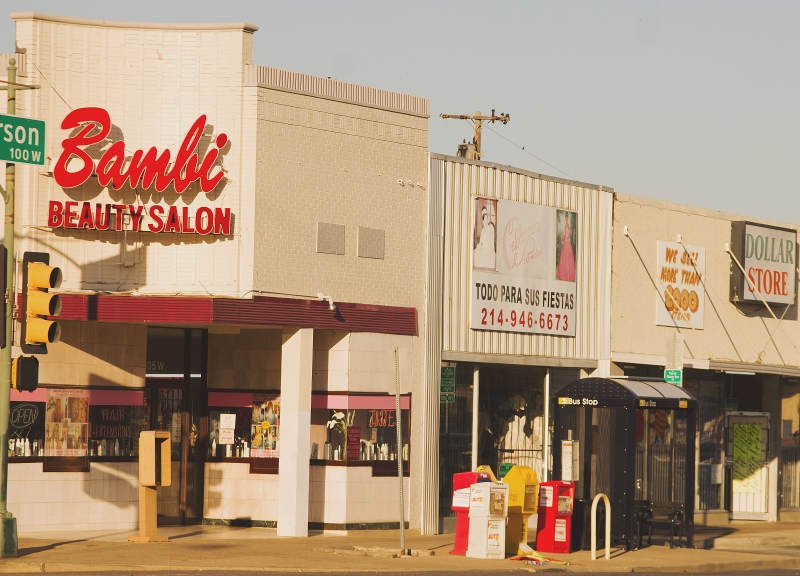 Change Is Coming To Jefferson Boulevard, And No One Told The Street’s Quinceanera Shop Owners.

Since the announced approval of real estate developer Michael Nazerian’s plans to bring some $42 million in renovations to the land surrounding Oak Cliff’s Bishop Arts District — $5 million of which will be kicked in by the city — chatter surrounding the developments of the surrounding area, including the newly dubbed Bishop Arts Village, has been fairly constant across the city.

Rightfully so: There are plenty of reasons to be excited about that particular future connection between the Bishop Arts District and Jefferson Boulevard. Plans include the addition of new buildings — some as high as four stories — that will bring ample new office and retail space to the area. Also in the works? Tons of added lighting, cleaner streets, the addition of 200 new apartments and the construction of an underground parking garage to accommodate increased traffic. 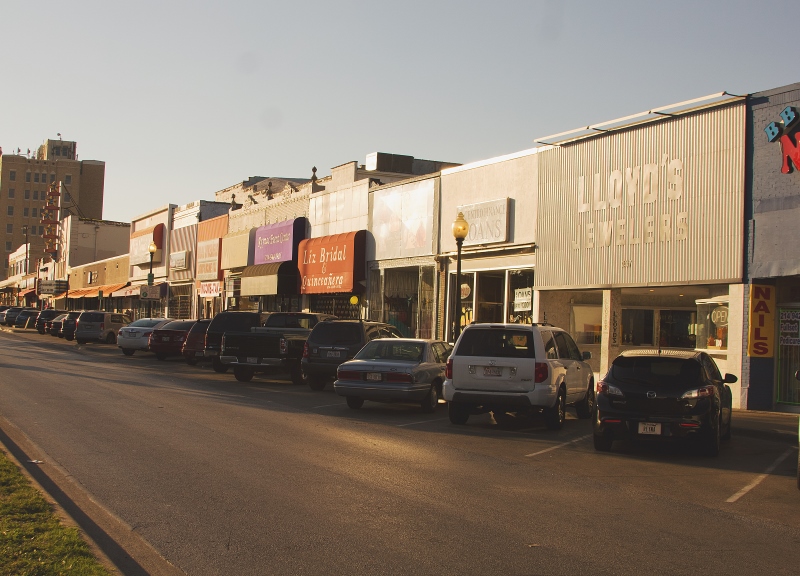 But, frankly, there’s reason for concern, too. What, after all, will the coming changes mean for the existing businesses nearby along Jefferson Boulevard, between Beckley Avenue and Polk Street? Specifically, are all those quinceanera shops that so charmingly dominate this area in danger?

We recently hit the Jefferson Boulevard strip in hopes of gauging these small business owners’ thoughts on the coming gentrification to their neighborhood. What we found was surprising: With two notable exceptions, we completely caught the owners and employees of these shops off guard; they claim to have never even heard of the development plans. Change is indeed coming, though. At least one shop we visited has already been forced to close in recent weeks after landlords upped its rent 70 percent. 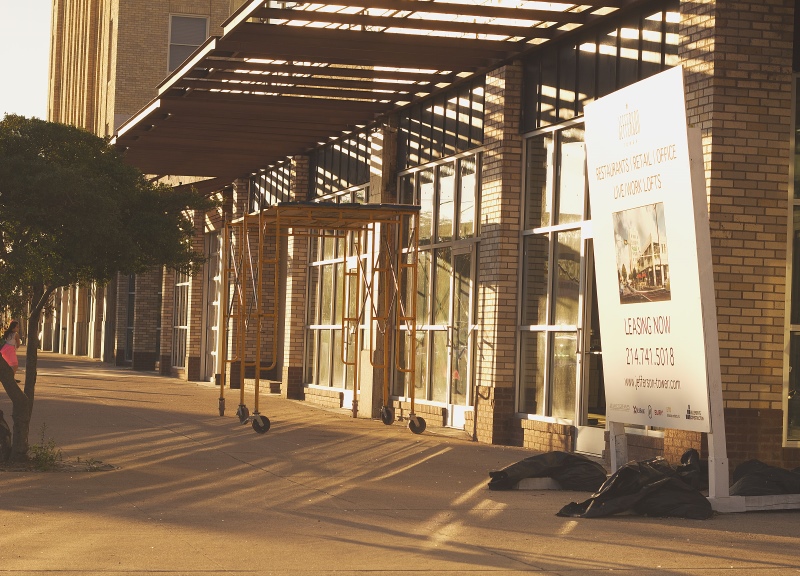 So it’s fairly clear at this point: The crossroads for this strip are coming up quick. An entirely new look coming for this strip seems practically inevitable.

Whether that’s a good thing for the “Heart of Oak Cliff” and the established merchants who’ve for so long provided Jefferson with much of its character remains to be seen. 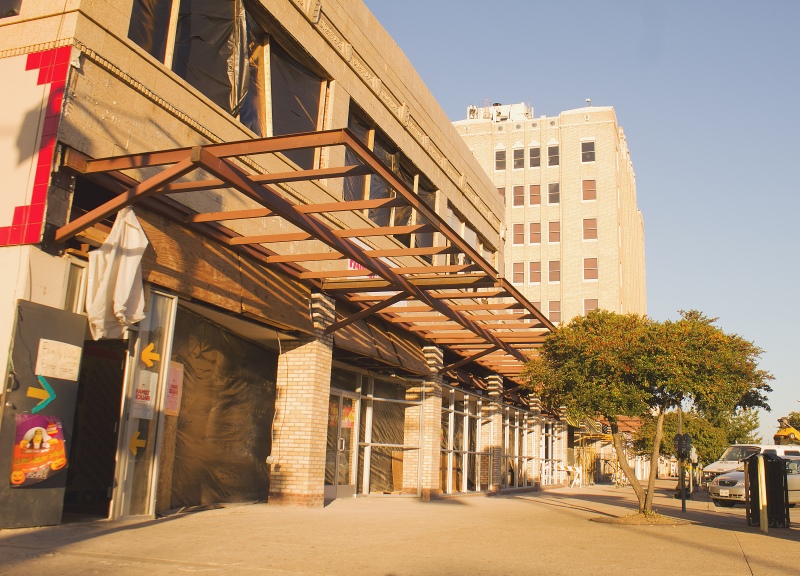 Norma Mariz’s shop hasn’t always been here in its current location. No, Mariz started off selling jewelry at flea markets before building up her clientele and moving into her bigger Jefferson Boulevard space. She worked hard to get here — and, yes, she’s quite proud of that fact.

Six years later, she’s still working hard. Just keeping her shop above water can be a struggle, she admits. With so many other quinceanera shops on the strip, things can get pretty competitive.

Given a choice, she says she’d prefer to keep her shop here on Jefferson. A change in location could hurt business, she thinks. She’s not certain, though. Really, though, it’s a matter she hasn’t give much thought: Until our visit, neither Mariz nor anyone on her staff had ever even heard of the Bishop Arts Village project.

Reyna Event Center.
Reyna Triann worries less about the improvements being made down the street than the type of clientele that any new businesses coming to the area might potentially attract.

“It depends if they’re Mexicans,” Triann says. “Then there will be many chances for business. If they’re American, then we won’t see the same business.”

To hear Triann tell it, gentrifying the area may mean more than just causing a few businesses to relocate. The clientele that seeks out shops like hers do so because of her low prices. She’s not sure she’d have quite the same success if forced to move elsewhere or if forced to pay higher rents.

In general, she admits that she feels wary of any potential changes that might affect the area’s rich Hispanic culture. She also acknowledges that she’s simply speculating on the topic: Much like Mariz, Triann says she was previously aware of any renovation plans for the strip.

Fiesta House.
Like pretty much every quinceanera shop owner and employee we spoke with for this piece, Fiesta House sales associate Lucy Garcia too admits that she hadn’t heard any news about the changes going on down the street from her shop until we mentioned it.

Still, she’s pretty adamant in her belief that the City of Dallas won’t just allow people to come in and push out shops like the one where she works.

“The majority of these stores have grown with Jefferson,” she says. “I don’t think much is going to change.”

Lucy Franco.
Lucy Franco can traces its origins back more than two decades — and all the way to Monterrey, Mexico. It’s one of six locations the quinceanera dress chain now operates in the States.

Perhaps for that very reason, Reyna Magana, an employee at the shop, is a little more informed than her down-the-street competitors. Not only are she and her colleagues aware of the Bishop Arts Village project, but Magana says they’ve already begun speculating on what it means for the future of their shop.

“Right now, it hasn’t affected us,” she says. “But we are thinking about it. If [rents go up], we don’t know exactly where we are going to end up. That’s bothering us. We thought this was a good place. This was the place. Everyone knows that. People from out of town come and know, this is the place. Jefferson is the quinceanera place. It’s going to be a big change.”

Magana says her shop is kind of waiting around to see how things play out before it makes any concrete relocation plans. But she acknowledges, too, that bad news might come down at any minute. And if it does, she knows it’ll probably mean the loss of a loyal customer base.

“It was a different community back in the day,” she says. “I guess they want to bring it back. And I understand that’s nice. But how do you tell people, ‘Y’know what? You can’t be here anymore.’ People have been here for years. And now they are going to have to take their things and move on? What if they lose their business? Does the city care about that?”

Celebracion Bridal.
Perhaps the most well-known of Jefferson’s many quinceanera shops is Celebracion Bridal, a retailer that’s previously been featured in a number of notable quinceanera magazines. Margarita Velesquez, a sales associate at the shop, credits the Jefferson strip for some of that success. Like Magana, she acknowledges how well-known this stretch on Jefferson Boulevard is for its glut of quinceanera shops. Unlike Magana, she doubts that any new business moving in nearby would be able to change that.

“I doubt they’d move out the stores,” Velesquez says. “Just because everyone knows this area. Even if they raise the rent here, things will be OK.”

She does worry somewhat, though, about how an influx of new businesses coming to the area could change the neighborhood’s overall cultural landscape. And that’s something Velesquez hopes doesn’t end up happening.

“They should conserve the culture that has been here,” she says. “We aren’t here for free. But we are working. The culture is here. If they told us to leave, it’s going to be hard. I have clients that know about me. I’d lose that.”

She needs more time to think on the matter, though. Like the majority of her counterparts up and down this road, Velesquez admits to knowing nothing about the Bishop Arts Village plans prior to our chat.

“No one has told us anything about the renovations,” she says.

Wilene Creations.
In January, after landlords hit her with a 70 percent increase in rent, Maria Saucedo was forced to relocate her Wilene Creations shop to Royal Lane.

There’s comfort in these new digs: Not far off from her shop’s new home is a tuxedo shop that was also recently forced to leave its old Jefferson Boulevard home. And, for what it’s worth, Saucedo says she hasn’t lost much business since leaving the quince haven where her business once stood. Actually, she’s pretty optimistic about her store’s future. In her eyes, the sheer number of quinceanera shops on Jefferson was a far bigger hurdle than any non-quince-related developments could be.

“There was too many bridal stores,” says Saucedo’s daughter, Maria Casillas, with something of a shrug.

That said, Casillas isn’t exactly thrilled about what’s going on along Jefferson.

“If they put apartments in, it will kill the business,” she says. “That street is known for [quinceanera] businesses.” 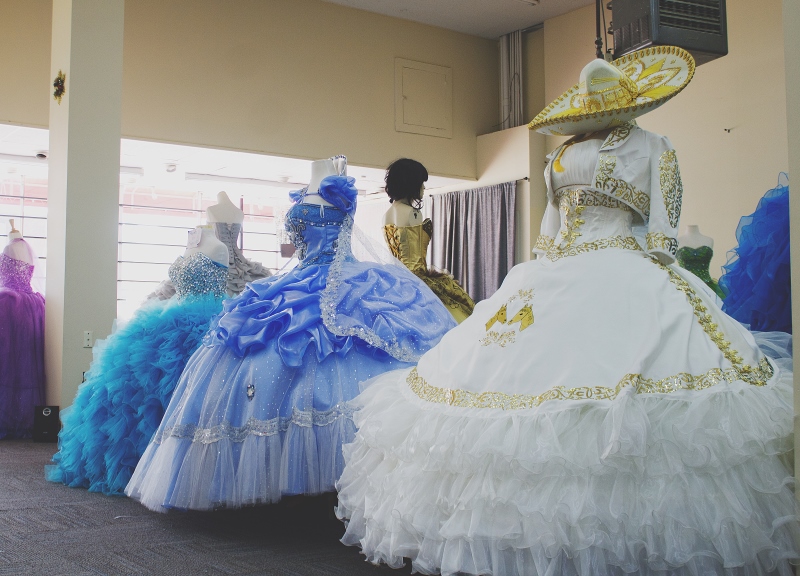 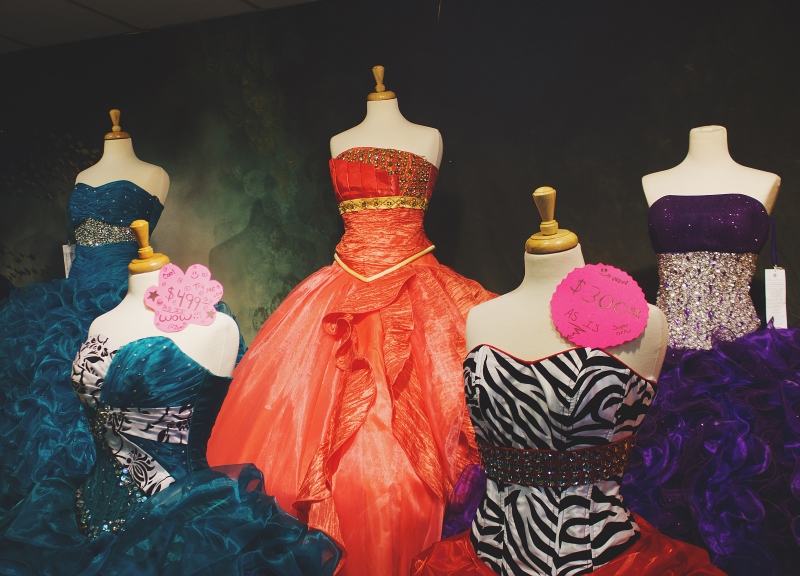 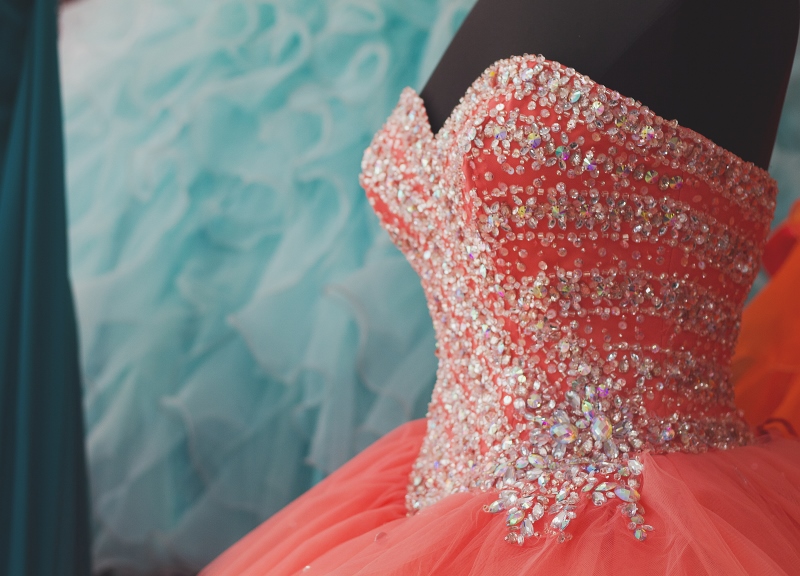 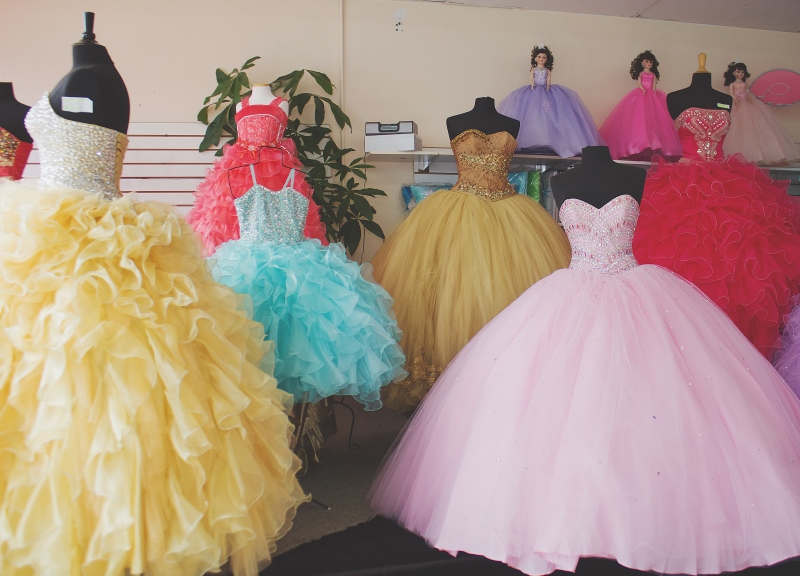 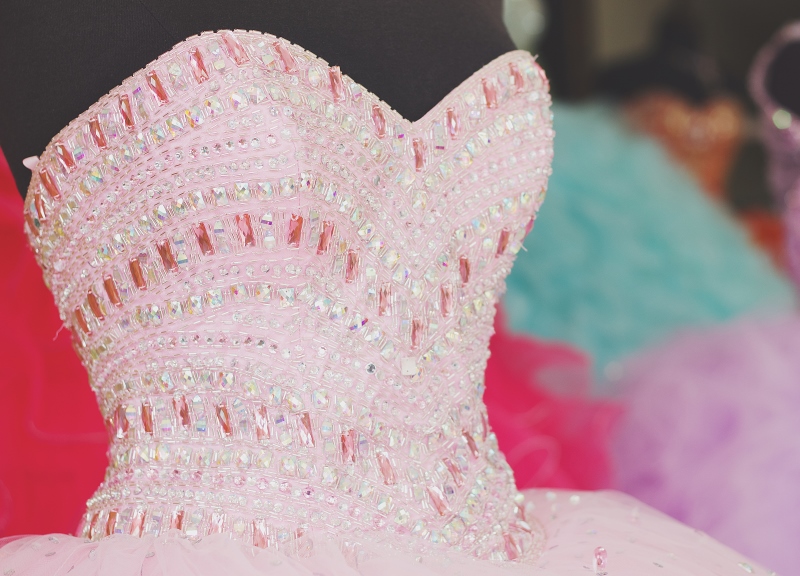 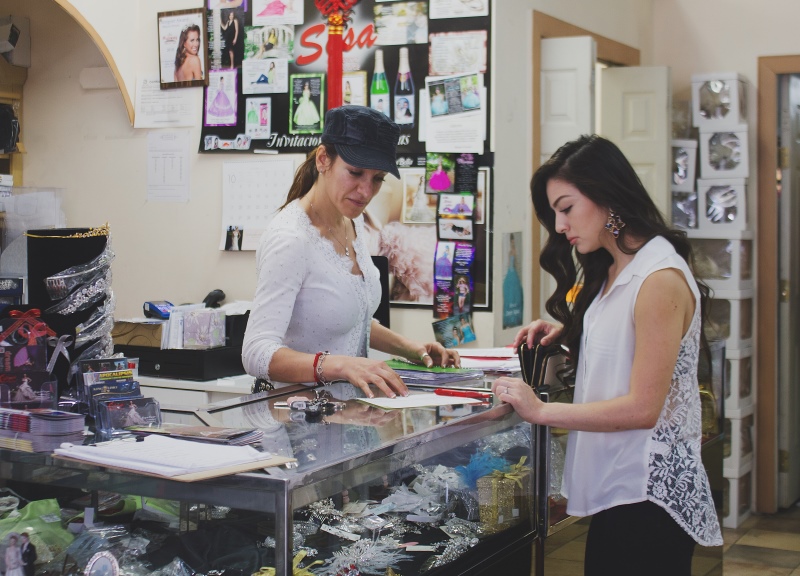 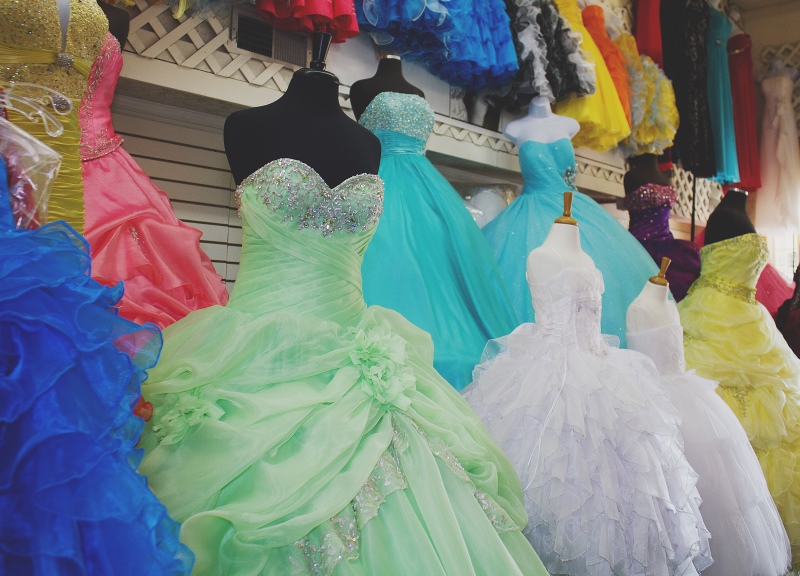 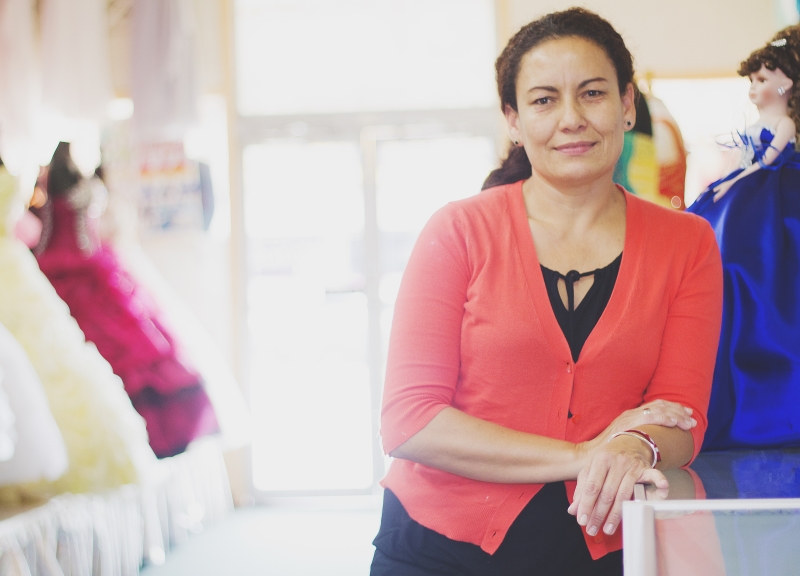 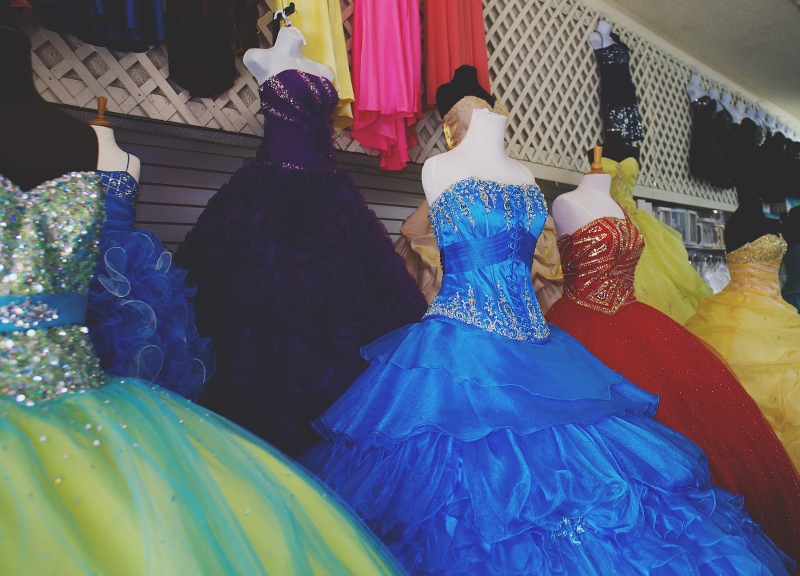 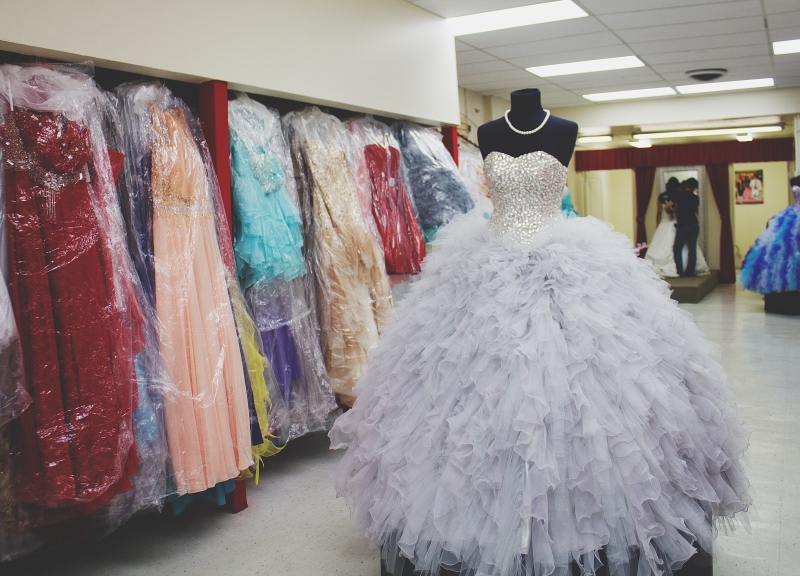 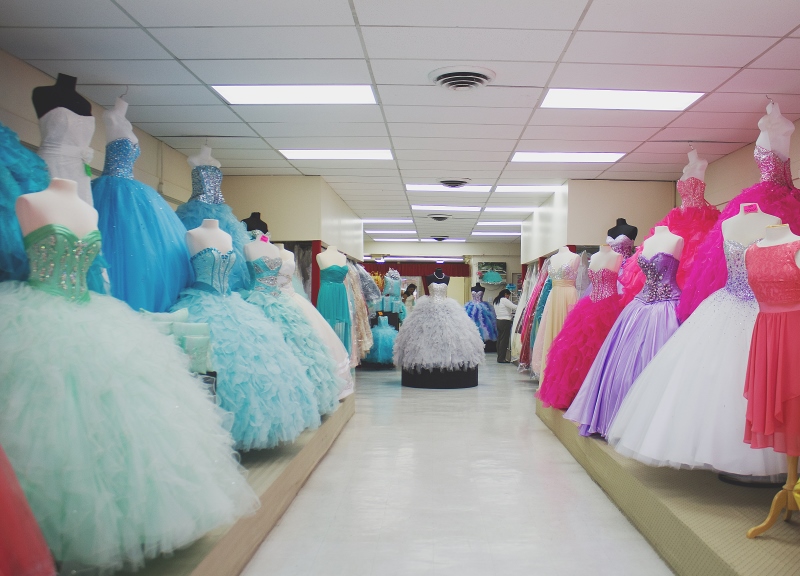 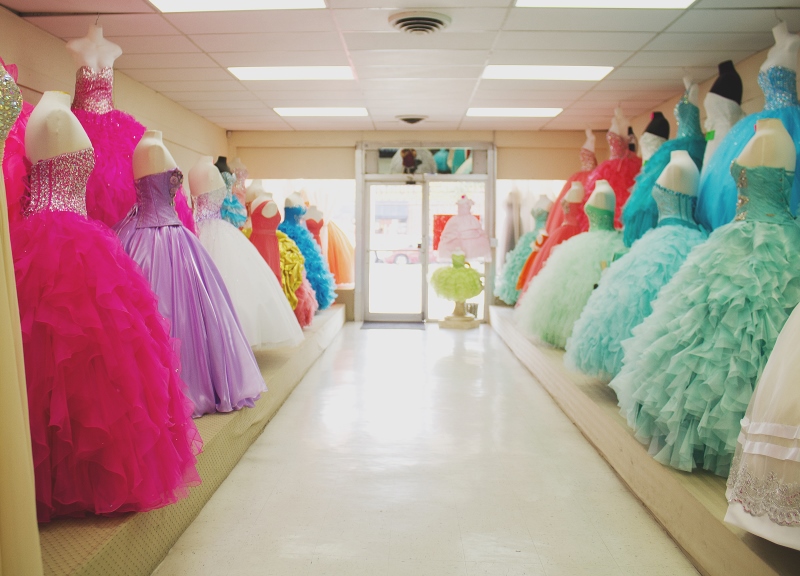