The Story Of A Ghost Story. 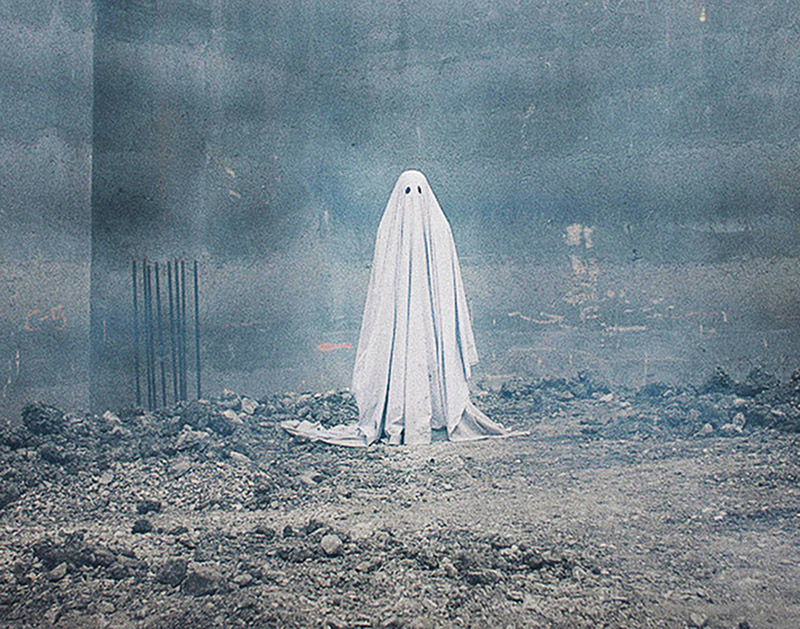 From its premise to its marketing to its execution, Dallas-based director David Lowery’s 2017 film A Ghost Story has been a source of excitement for the film community ever since its debut at this year’s Sundance Film Festival.

A great deal of this palpable to-do has been centered around the serious topics the film explores — love, loss, letting go and the passage of time — juxtaposed with the relatively child-like image of Casey Affleck, playing the film’s protagonist and titular character by spending the majority of the film wearing a white sheet with two holes cut out for eyes, representing essentially the most rudimentary concept of a ghost imaginable.

The film’s title is a very much an accurate one: A Ghost Story follows Affleck’s character — simply named C — from his life with his wife, played by a delicately emotional Rooney Mara, to his afterlife, where Lowery experimentally explores the concept of time. As the film progresses, so too does the speed with which C processes time’s passing: He watches on as his wife lives in their house, grieving his loss for a week, then a month and then a year, before she eventually leaves the house, and the next family moves in, and so on and so on, in seeming perpetuity. Throughout, C’s ghost is either shown ever so slightly out of the frame behind the house’s latest occupants or directly in focus, all the while very blankly but somehow expressively coming to terms with his cage of an existence.

Written by Lowery in a single sitting, A Ghost Story was conceived as a means for the filmmaker to flex his own creative muscle following a three-year stint spent working for Disney on a well-received remake of Pete’s Dragon. Just a few weeks after the light-on-dialogue script was completed, Lowery quietly shot the film in Irving along with his frequent, and similarly Dallas-based, collaborators Toby Halbrooks (a former member of The Polyphonic Spree) and James M. Johnson (owner of Spiral Diner). The shoot reunited the producers with Mara and Affleck, the leads from their 2013 breakthrough indie hit, Ain’t Them Bodies Saints.

That the film is so focused on the increasingly swift passage of time — to the point, even, of the tagline on the film’s posters reading “It’s All About Time” — is perhaps not a surprise given the whirlwind that these Dallas filmmakers have experienced since Ain’t Them Bodies Saints turned them into Hollywood darlings.

“At the beginning of the movie, time moves very slowly,” Lowery says when reached by phone last week, just prior to the film’s distribution expanding to include theaters here in his hometown. “It resembles the way we perceive time as children, where a day can feel like a year, and then it starts moving more fluidly and quickly. And it’s reminiscent too of how when you’re an adult, where a year can feel like a month and then you’re asking yourself that classic question, ‘Where did the time go?’ I wanted the movie to function that way because that’s how I experience time.”

How the poignant and pensive film patiently builds to that notion is just one area in which its ambition shines through. Coupled with a unique, windswept visual style from cinematographer Andrew Droz Palermo and a heart-wrenching performance from Mara in particular, A Ghost Story‘s look at nostalgia, grief, the human condition and a place’s history often feels grander than the small production really was.

Its production was largely kept under wraps, both locally and in the industry, even with a celebrated, albeit controversial, movie star in Affleck attached to it and participating in its execution in such a unique way, hidden under a bedsheet from the audience’s gaze (a convenient fact that has not been lost on some of his more vocal critics).

“I wanted to make a movie where we didn’t feel that we were in a public microscope,” Lowery says. “When movies are reported in the trades with actors attached to them, people build preconceived notions. I knew if they heard that I was making a movie with Rooney and Casey — and that it was a ghost movie and it was being shot in Texas — people would start to imagine a movie that this one would never correspond to. I wanted to save this movie from that experience, and wanted us to function in anonymity because the creative process would be better if we didn’t have that. We were able to fly under the radar, and no one was asking questions or bugging us. It was just a nice thing to have the anonymity.”

Even so, Lowery’s increasing profile in Hollywood circle led to the film’s distribution rights being scooped up by chic independent film house A24 ever prior to it earning raves at Sundance, where Vanity Fair proclaimed it to be “like nothing you’ve ever seen.” Since its release earlier this month in select cities on July 7 (it has since expanded to include most major markets), the film, which Lowery self-funded for a reported $100,000, has already proven a financial success: In less than 20 days, it has earned over $300,000, more than triple what it cost to make.

While co-producer Halbrooks and score composer Daniel Hart, another Dallas-bred contributor to this crew’s inner filmaking circle, are quick to call A Ghost Story the best thing any of them have ever done, it didn’t necessarily begin that way. Initially, the movie was mostly a pet project for Lowery — an outspoken advocate for the Dallas film industry who has long voiced a desire to stay in Dallas despite Hollywood’s beckoning — and a chance for the lifelong North Texas native to create something on his own terms and on his own turf. He was open to shooting most anywhere in North Texas; that the location that much of the film centers around was in Irving, the very town where he was raised, was just a happy coincidence.

“It’s very easy for me to make movies here,” Lowery says. “I have so many means at my disposal in Texas. It wouldn’t have made sense to go anywhere else. Setting nostalgia aside, it’s just practically easier. I like making movies in my backyard — I have since I was 7 years old. And this movie needed to be made in my backyard. I don’t think it would have worked anywhere else.”

(Halbrooks, too, relished the opportunity to work in such a comfortable setting: “I loved that I could go home at night, which was the best part, to be frank,” he says, laughing.)

While certain sequences were shot on an active construction site in Downtown Dallas, along the Trinity River and atop Cityplace Tower, the movie is primarily set in a single home, which much like Affleck’s character, experiences a full life of its own over the course of the film.

“We knew that we needed a house to destroy, which is obvious to anyone that has seen the movie,” Lowery says. “We weren’t sure how to accomplish that, but my producers had the bright idea to get in touch with a demolition company to see what houses were up for demolition, then getting a list of the owners and calling them up to see if we can let us shoot in their property. We drove around all over DFW, looking at those houses. When we came upon this house in Irving, it looked right it and had all of the qualities I was after.”

In an interview with Birth Movie Death, Lowery notes how at home he felt on the set, in large part thanks to the hospitality that Irving locals Barbara and Scooter Walsh showed his crew once he’d committed to filming inside of their old home. The couple became very involved in the production, not just by allowing the crew to film at their soon-to-be demolished house, but by providing portable AC units for the crew as it battled the June, July and August weather during which A Ghost Story was shot. Beyond that, the Walshes’ granddaughter even worked as Mara’s stand-in for the entirety of the film. Says Lowery: “They became an important part of the process and they became part of the filmmaking family and it was wonderful to work with them.”

Scoring the Walsh’s home was a major factor in keeping A Ghost Story‘s costs down.

“You don’t need permits to shoot in someone’s private building,” Halbrooks says. “You just need permission. If you’re not shooting down a street, you don’t need a permit; you’re good. There were a couple of times we did need permits, but it was mostly [kept to the set].”

And even though that set would be destroyed in order to progress the film’s plot, it’s fitting that Lowery and Halbrooks each speak so reverently about it. Themes of sentimentality and nostalgia are key to the film’s emotional resonance.

Beyond the film’s clear portrayal of his stance, Lowery is quick to acknowledge his own troubles with letting go of the past.

“I have toys from my childhood and pieces of childhood detritus — not just one box, but many boxes of stuffed animals and comics,” Lowery says of his own penchant for longingly looking back upon his younger years. “I never open them or use them; I just have them, and they are totems of nostalgia. They take up too much space in my closet, but I take them with me whenever I move. They aren’t useful, and they are holding me back in some degree — but I can’t get rid of them. I can’t justify selling them or throwing them away.”

In essence, that inability to move on is the very narrative A Ghost Story tells.

“I know they don’t mean anything,” he adds of those collections from his youth, and in many ways verbalizing what his film’s main character cannot. “I’m trying to figure out a way to reconcile that. I think there might be a point where nostalgia will prevent my growth as a human. I want to be wary of that, even as I succumb to the immediate pleasures of nostalgia.”