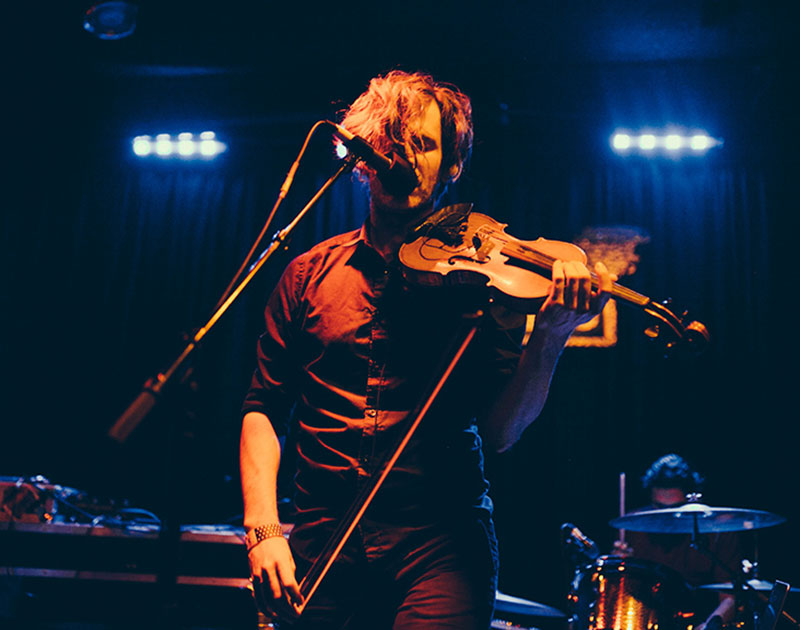 After Having Established Himself As An Indie Rocker And Film Score Composer, Daniel Hart Tells Us What It Was Like To Write The Music For The Record-Breaking S-Town Podcast.

Daniel Hart’s versatility as a musician is his greatest strength.

He’s performed with highly touted artists like St. Vincent and Polyphonic Spree, and worked both as a solo artist and with his band Dark Rooms, which recently departed Dallas for Los Angeles. He’s also contributed the scores to several films, including Disney’s Pete’s Dragon remake, directed by Dallas’ own David Lowery, with whom he’s also teamed up for the upcoming A Ghost Story.

So when a guy already has that kind of success on record, maybe we shouldn’t be surprised to see that, when he’s asked to compose music for a podcast, it ends up being one of the medium’s biggest successes.

Hart wrote several pieces for the wildly acclaimed — and record-setting — S-Town podcast, including the title theme. His blending of folksy strings and synthesized beats help establish the podcast’s melancholic and introspective atmosphere. The focus of the story, John B. McLemore, is an elusive, often frustrating figure to pin down — but Hart provides a soundtrack that feels tailor-made for his subject.

(Additional soundtrack contributions to S-Town were also made by Helado Negro, Matt McGinley, and Trey Pollard, with an additional listed credit for Christina Azarian. The song played at the end of each episode, “A Rose for Emily,” comes from the band The Zombies.)

(Before reading further, though, please be warned that the below interview contains spoilers. What you do now that you’ve been warned of a spoiler for S-Town is up to you. But if you haven’t listened to the podcast, and have somehow managed to avoid all details about it up to now, you might want to save this interview for later. Just saying.)

Can you tell us about how you were brought on to do music for S-Town? How much information did you have going into the project?
Ira Glass reached out to me about possibly working on it. He described the podcast to me, and he sent me a couple short clips from the first few episodes and asked me if I would be interested in working on it and interested in recording a couple of audition pieces.

Do you think at that point they were pretty set on what they were looking for, sound-wise? Or was it more open at that point?
I think they were open to different possibilities. I know Ira told me at the time he had in his mind maybe using hip-hop beats and strings as a starting point that would be a good place to jump off from. But he told me to just take that as the beginning, and build on it in whatever ways made sense.

How was it on your end, taking that first step into scoring for the project?
After listening to a couple of clips from the series, and from the way [Glass] described it to me, I felt like I had a really good feel for the story. I felt like it was a story that sounded familiar to me, in a way — not that it’s my own life experience, but in a way that immediately brought some musical ideas to mind. So I tried those ideas, I recorded a couple of demos, and I sent them to Ira, and he liked them, and he sent them to the other producers on the podcast – Julie [Snyder] and Brian [Reed] – and they liked them as well. And that got the ball rolling. In fact, the first piece I wrote and turned in back in December ended up being the theme of the show. It definitely felt like we were definitely on the same page in terms of what we wanted the music to be like on the podcast.

Did the final submission stay pretty close to your initial submission?
Just minor changes. It’s very close to the first thing I turned in.

What’s it like scoring for a podcast, where the work is completely auditory?
I’d never done that before, and I wasn’t sure what to expect — but I have listened to a whole lot of This American Life over the last 20 years or so, so I do feel like I had some sense of what kind of music they like to use, how they like to use it, and how it functions within their type of storytelling. But I found it’s actually not very different from writing music for film or for TV, in the end. There’s no picture, but the story itself is so full, even without any kind of visual, that it felt very much the same. I felt like I had a picture in my brain of the story, and the way it was being told, in a way that gave me as much information to go on as I needed, in order to figure out what music would best suit the story being told.

I was going to ask how much of the text you had to reference when you’re putting things in. Were they saying, “Here’s this part of this episode – we need x amount of music,” or is it just a matter of putting together what you have, with them moving things around as they see fit?
There were only a couple of times where Julie emailed me and said, “Hey, I’ve got this specific part and I’m wondering if you can do something specific for it. I tried putting in this other piece you made, and it’s good, but not quite right — can you make something else for it or tweak this piece to make it fit better?” But, other than that, I was just writing a bunch of music based on the direction they were giving me, and they found the places in the podcast where they thought it would fit best.

This might be a dumb question, but have you had a chance to listen to the podcast?
I’ve listened to it! In fact, I recently listened to it again with my parents on a road trip, because they had not heard it yet.

They hadn’t listened to it?
No, they hadn’t heard it yet. They’re not the most tech-savvy people, so the idea of downloading or streaming a podcast is not in their nature.

What’s it like having your parents with you listening to your work?
They are both musicians themselves — professional musicians now retired — and they’ve been listening to my work since I was five years old or something. I feel like that is par for the course at this point. I’ve listened to a lot of stuff with my parents. They’ve always been extremely encouraging of me, but they’ve also had this policy of… I don’t know, not complimenting me unless it’s really good? If they don’t like something, they just won’t say anything. But if they like something, they’ll tell me. And they are, I think, about as biased as it comes, because they’re predisposed to like things I’ve done. But usually, when they like something, they tell me why in a way that makes it feel sincere. And they seemed to like this a lot.

When you listened, was there anything that particularly surprised you about how they used your music?
Y’know, there’s a part at the end of episode two, where there’s the big reveal where John B. McLemore’s committed suicide. And even though I’ve known the story for months – I’ve listened to it, I’ve worked on it – just the way they piece together that specific part together, it still gets me. It still makes me emotional. And the music that they used there, I would never have thought to put it there. It would not have been the choice I would have made if I had produced the podcast, but I really liked it. I really liked what they chose to use.

Were you surprised by all the attention the podcast received when it was released?
I was really surprised. I know that the people from This American Life have a really good track record, and have produced stuff that people liked a lot, but I wasn’t sure how this would be received. I felt like it’s different from anything else I had seen them do, I wasn’t sure if it would be too sensitive a story, or too introspective to really catch on. So when it broke all the records for podcast downloads, and when I started getting messages from people telling me how much it meant to them, it took me aback.

Do friends and people who know you were on the project ask you for information, or try to pick your brain?
[Laughs.] Yeah, a little bit. But, mostly, people just want to talk about what I think about it, or what I was thinking when I was writing music, more than me divulging the S-Town crew’s secrets.

As far as getting this project versus scoring a film or TV show, what are people’s responses when you say “I’m scoring a podcast!” to them? It seems like a newer concept, something people aren’t really going to be familiar with.
Yeah, it doesn’t really register with people. And then I say, “Did you listen to Serial?” And even if they didn’t, most of the people know what it is. And then I tell them that it’s a podcast from the makers of Serial and This American Life, and then it suddenly has a credibility to it regardless of the medium.

Any upcoming projects you have that you can tell us about?
Yeah! My band Dark Rooms just finished our second album. We’re touring in the fall, both the U.S. and Europe, but, before that happens, one of our new songs is pretty heavily featured in a film called A Ghost Story, which was made by David Lowery, who is my longtime collaborator. I’m really excited for the film. It comes out July 7. I’m really proud of what we made, and really proud of how the Dark Rooms song ended up being used in the film.