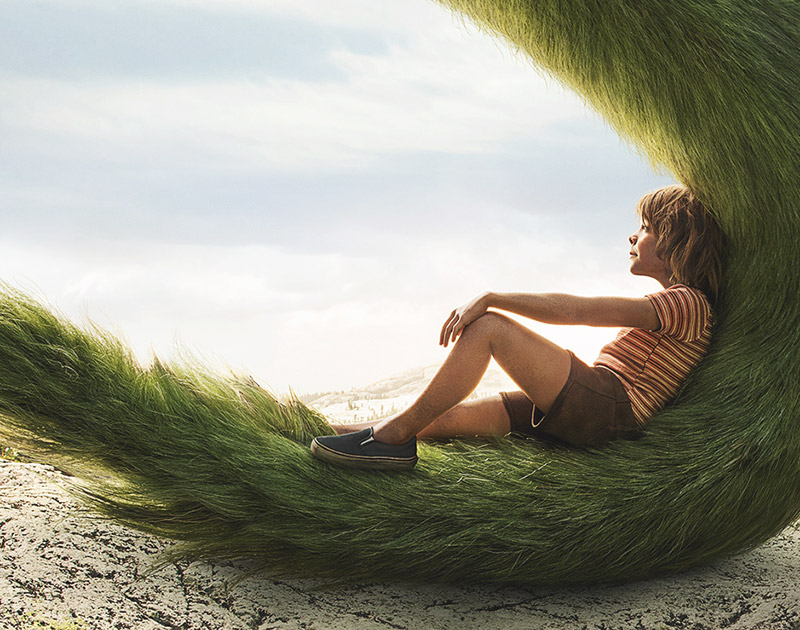 David Lowery’s Remake Of Pete’s Dragon Has The Heart Of The Original But Lacks Some Depth.

Nostalgia can be a hell of a drug. It can cause people to boycott a film (see: Ghostbusters) or it can fuel box-office no matter how good or bad a film actually is (see: The Force Awakens).

And now here we have Disney getting in on this action by rebooting their own property from the ’70s, Pete’s Dragon. This new version, of course, benefits greatly from some updated CGI animation.

But was this move at large a smart one by Disney? The original is so well loved. Could nostalgia actually hurt this film?

Turns out, Disney — and the Dallas-based direction and production team of David Lowery and Toby Halbrooks that’s at the helm here — knows what it’s doing. They remade Pete’s Dragon for kids today, while keeping the spirit of the original movie intact.

The plot follows the titular Pete (Oakes Fegley), a precarious boy who was orphaned when he was young. As a toddler, Pete wanders into the woods, befriends a dragon he lovingly names Elliot and, over the next six years, they spend their days running, flying and being adventurous together. One day, Pete notices forest ranger Grace (Bryce Dallas Howard), and becomes curious about her life. Simultaneously, right by where Pete and Elliot live, workers cutting down trees discover Pete, and Grace begins investigating his identity, placing his lifestyle’s future into question. Naturally, Elliot wants Pete to stay with him in the woods, and Pete becomes torn about where he belongs.

Nostalgia plays a role here, but perhaps not in the way one would anticipate. While watching this movie, I was reminded of a number of family movies from the ’90s — The Indian in the Cupboard, Little Giants, Secret Garden and The Little Princess, just to name a few. These are films with standard plot beats and pretty basic characters that exceeded expectation through heart — their most redeeming quality, and the ultimate reason that audiences clamored to watch these films over and over again.

This new version of Pete’s Dragon falls into this category. I don’t say that as a knock on the film by any means. Lowery has crafted a sweet film with a lot of heart and humor here. Families are going to love it.

There’s plenty to love, really. Oakes Fegley does a magnificent job as Pete; almost half of his scenes are with an animated dragon, and Fegley is just a natural on screen. Elliot’s animation is also quite lifelike. He feels like he has actual weight to him. Better yet, he’s playful, fun and immensely protective of Pete. Their relationship is truly great, and I almost wish there were more scenes with these two interacting in the woods.

Meanwhile, the rest of the cast is as good as expected, even if their adult characters are pretty one note. Bryce Dallas Howard is the caring, maternal figure. Her father (Robert Redford) is there to give her platitudes when she feels lost. Karl Urban, on the other hand, is full-on chewing his dialogue as the antagonist who wants to capture Elliot — a choice that’s perhaps too over-the-top, although it also provides some of the film’s humor. Giving these adults more of an arc probably would have raised this film to the next level above family fare, but unfortunately the script doesn’t much allow for that development.

So back to the initial question: Is this a movie that needed to be remade? Not really. The end result is an entertaining enough family film, but one that will likely be forgotten in a couple of years. That’s a little disappointing, as this Pete’s Dragon has a lot of heart and is likely to elicit many a smile even from audiences unfamiliar with the source material.

Maybe this is a greater concern with family film-making at large, but a little added depth would’ve gone a long way toward this film’s enduring appeal.