The Spread: Downtown Dallas Is Getting A Real Grocery Store! 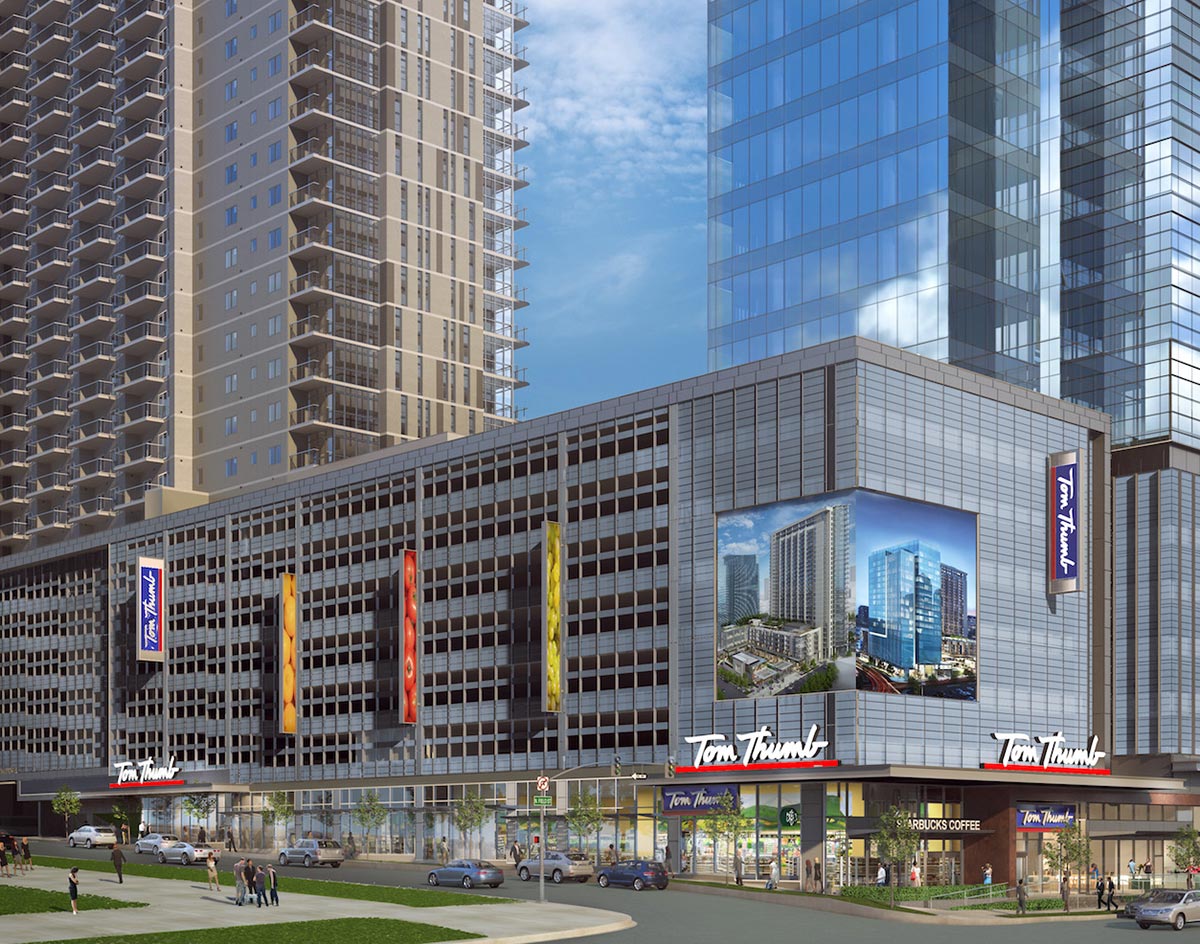 After years of residents openly clamoring for a legitimate grocer to take up residence in the neighborhood, Downtown Dallasites are finally getting their wish thanks to the impending opening of a new Tom Thumb store set to open soon Victory Park.

Located within the mixed-use development The Union, the store occupies a whopping 60,00 square-feet of ground floor space, making it the closest grocery store to Downtown Dallas — and, no offense to Royal Blue Grocery, which opened on Main Street last summer, but this new grocery isn’t likely to be described as “boutique” by anyone.

According to representatives at The Union, amenities of its new Tom Thumb will include grocery pick up, indoor and outdoor seating with 10 TVs, a service grills slinging burgers, sandwiches, sushi, poké, pho and other Pan Asian options, and a beer and wine bar complete with an expanded beer and wine shopping section. The store will also feature other familiar Tom Thumb elements, such as a Starbucks, an in-store bakery with goods made daily, and your standard sections for fresh produce, meat, seafood and pharmaceutical needs.

Currently, there is no official opening date set, but be on the lookout for a debut this spring.

Also this spring, Dallas will also be able to find out its its dining scene has finally “arrived” or not. Earlier today, the folks at the James Beard Foundation Awards revealed the semifinalists for the 2019 of their celebration of all things culinary across this fine nation, and Dallas received a whopping six nods in today’s reveal: Misti Norris‘ East Dallas restaurant Petra and the Beast has been recognized in the Best New Restaurant category; Bullion‘s Ricardo “Ricchi” Sanchez has been giving a nod in the Outstanding Pastry Chef category; The French Room is up for an award in the Outstanding Service category; and, in the Best Chef in the Southwest category, Bullion‘s Bruno Davaillon, Lucia‘s David Uygur and Regino Rojas of Purépecha Room by Revolver Taco Lounge have all been recognized. A month from today, the finalists for each category will be revealed in a ceremony held down in Houston. The winners will be announced at a gala held in Chicago on May 6.

Of course, everyone can’t always be a winner: In Deep Ellum, Bowls & Tacos officially threw in its towel after a final service this past weekend. The combination poké bowl and taco joint fought hard since its opening in the spring of 2017, adding breakfast tacos and even vegan sweets through sister its company, Sugar Fang Vegan Bakery. Ultimately, though, the restaurant struggled to stay viable, according to a Facebook post by owner Sam Wynne. While Bowls & Tacos fans will have to find another place for their poke and taco fixes moving forward, Sugar Fang will continue to push out vegan pastries back down the street at Braindead Brewing. Wynne, meanwhile, seems to be doing OK, riding high off the opening of his new bar in The Cedars called Mike’s Gemini Twin, which is earning all kinds of early acclaim for its dive-y offerings.

Speaking of pressing on, the man behind Bob’s Original Steak and Chop House is returning to the Lemmon Avenue restaurant this week, per reports from D Magazine and others. After almost a decade away, Bob Sambol has repurchased the licensing rights to the concept that he sold nine years ago. Although Omni Hotels maintains the rights to the name, Sambol returning to the brand comes full circle for the restaurant as it returns to its original element. Expect the core menu to remain the same, with a few new specials added to the fold.

On the other hand, change is definitely in store for Deep Ellum’s unicorn-themed Magical Dessert Bar, which just continues to grow despite many problematic elements. After opening a second outpost in Houston, the spot will no longer serve as its big sister Chills 360‘s neighbor, instead taking up new residence at 2408 Main Street, per a CultureMap report that says the new spot will help the business owners cater to its big crowds.

Another Dallas trend that cannot be stopped? Hand rolls. After some frontrunner businesses established the fare as North Texas’s Next Big Food Item over the course of this past fall, an aptly named newcomer called Sushi de Handroll has joined the fray by announcing its arrival to The Hill at Walnut Hill Lane’s development. Per Eater, the concept features a selection of temaki, served sushi taco-style (read: in metal taco holders) meant to be more approachable to American diners. Price points are competitive to similar establishments, with three rolls going for under $10, and five rolls for less than $15. Other offers include tempura appetizers, an omakase (read: chef’s pick) menu and Japanese-inspired cocktails. Hours run from 11 a.m. to 10 p.m. Monday through Saturday, and Sunday from 11 a.m. to 9:30 p.m. with daily lunch specials from 11 a.m. to 4 p.m.

In other opening news, a new Creole-inspired vegan spot is coming to Oak Cliff. Vegan Food House will be located at 832 West Seventh Street, in the former Nice Ice House space. The concept, which branched off from the West Dallas restaurant Da Munchies, will feature vegan po’boys, avocado toast, and signature dish called the Big Mac N’ Cheese Buffalo Chick’em Sandwich made with fried oyster mushrooms, says CultureMap. No word yet on an official opening date.

Also in Oak Cliff, D‘s got the beat on a new coffee shop called Peaberry Coffee surfacing in the Kiestwood Village Shopping Center. The shop uses local fixtures such as Oak Cliff Coffee Roasters and CocoAndre for its not chocolate, as well as daily pastry delivery from Hannah’s Gluten Free Bakery, and weekend pop-ups from La Casita Bakeshop and Hippos and Hashbrowns. The shop is open Monday through Friday from 6:30 a.m. to 3 p.m., Saturday from 7 a.m. to 5 p.m. and Sunday from 7 a.m. to noon.

Just off Lower Greenville, another new coffee shop is set to open at 5626 Bell Avenue called La La Land Kind Cafe. While that strip isn’t exactly lacking for caffeine options, this spot aims to set itself apart from the pack by hiring former foster children who’ve aged out of the system, GuideLive reports. Expect a late March opening there.

Out in Garland, meanwhile, a coffee shop called Honduras Fresh Coffee is joining that area’s burgeoning coffee scene. Located at 9219 Garland Road, CultureMap says the concept roasts its own coffee, utilizing relationships with growers in Honduras. Another company provides the baked goods and cafe fare, which includes but is not limited to paninis, muffins, cookies, cheesecake and an assortment of other pastries. Weekday hours are from 6 a.m. to 8 a.m., and weekends from 7:30 a.m. to 7:30 p.m.

In sweets news: Taiyaki (read: ice cream-stuffed pastries) are coming to the Frisco Ranch development. Eater reports that the California-based SomiSomi will serve up Korean-inspired soft serve in warm, fish-shaped ice cream cones, with a selection of different flavors for both. Be on the lookout for an opening date coming soon.

Also in desserts news: Yet another Instagram-friendly pop-up is coming to the region, which we mention here because of its candy theme. The interactive art installation is slated to hit the former TreeHouse space at The Hill as early as May, and will run through August. The California-spring pop-up combines elements of an art exhibit and a candy shop, says CultureMap. Tickets run at $28 a person ($20 for kids), with participation limited to a group of 50 people at a time.

Another social media-famed food to watch out for is Corey’s Catering’s turkey legs, says the Observer. The traveling pop-up recently went viral for its guarantee that if the meat doesn’t fall off the bone, the turkey legs are free (as opposed to $12 apiece and two for $20 otherwise). Though the consistency of the meat rarely calls for this, you can find them around town to test for yourself.

For the more adventurous palate, the Observer also suggests you head to Bison Bar and Grill on Ross Avenue for the Rocky Mountain oysters challenge. Diners who can finish six bull beanbags of deep-fried beef calf balls, covered in an “F.U. sauce” made with Carolina and ghost peppers in four minutes get to sign the wall. The challenge benefits a good cause, with $10 from each attempt going to the Kamil Patel Memorial Scholarship. For the less daring, the menu features an array of more approachable bison dishes, such as burgers and bison chicken-fried steak.

Speaking of horned things, Beer In Big D reports that a taco-centric brewpub called By the Horns has arrived in Mansfield. The brewery shares a space with Tacos & Avocados, where you can find beer-braised brisket tacos among its wares. As for the beer side of things expect German-influenced brews, alongside other cocktails and liquor options. By the Horns opens daily at 11 a.m.

Finishing things off on one final beer note: Deep Ellum Brewing Co.’s Funkytown Fermatorium has hit yet another bureaucratic pothole. After the government shutdown delayed its official opening, the Star-Telegram reports that the brewery has been forced to paint over its lettering in compliance with Fort Worth city ordinances. While DEBC maintains that their sign was a mural, the city defines it as an advertisement that requires a sign code variance. Currently, the brewery is in the process of completing their variance and exploring other options, as the grand opening is scheduled for this Friday, March 1 — where, yes, there will be free beer.