The Dallas Morning News Pulls The Plug On GuideLive. 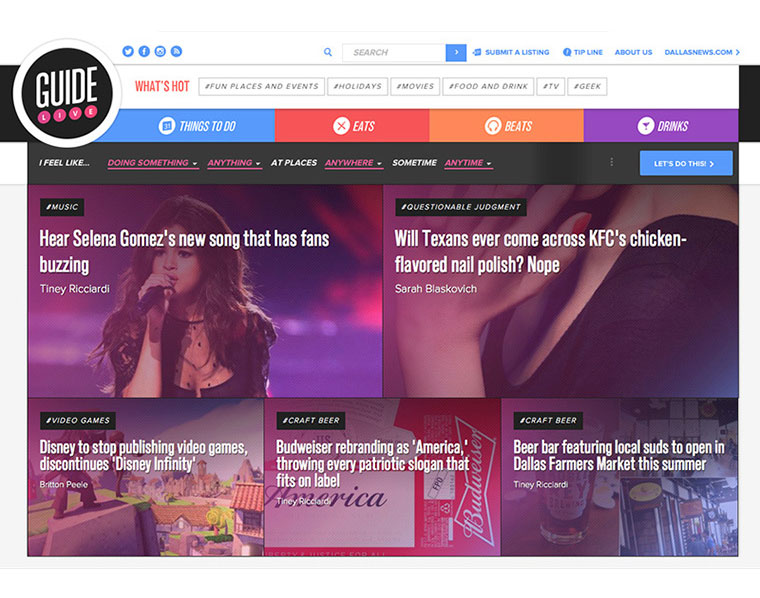 As Part Of Its Slick New Website Redesign, The DMN Is Moving Most Of Its Brands Behind Its Paywall — And “Eliminating” Its GuideLive Arm.

As expected, the Dallas Morning News rolled out a slick, long-time-coming redesign of its website this morning. Per an article the paper released itself about the changes, the new site runs “three times faster than the old” one and is now “the fastest [major news outlet website] in Texas.”

As part of these changes, Dallas’ only daily is also kicking off a new marketing and branding direction that “emphasizes the value of locally produced journalism” and sees the brand embracing a new letter “D” logo that nods to the long-standing Old English-styled font that the paper lists its name in atop its front page each morning.

The DMN’s new logo. (Yes, you’re right; it sure does look a lot like the Detroit Tigers logo.)

The biggest change of all, though, isn’t to the Dallas Morning News itself so much as to the imprints that it has long been pushing on its readers. DMN entities that previously operated under standalone URLs — including its entertainment-centric GuideLive brand, its sports-focused SportsDay and SportsDayHS arms, and its Spanish-language news arm Al Día — will now all exist within the dallasnews.com URL, representatives with the paper confirm.

Jessica Baldwin, director of the Dallas Morning News‘ brand marketing, says the SportsDay arms will see the fewest changes, with those brands still existing as an extension of the DMN itself, but with their content now being “more closely tied to The Dallas Morning News.” To wit: The SportsDay app is still working at the time of this writing, and all SportsDay-related social media properties still bear their SportsDay-related names; the only difference so far is to the old SportsDay website, which now redirects to a dallasnews.com URL.

Al Día will similarly continue to exist, but its articles will also now all be hosted on dallasnews.com, with its old URL redirecting to a dallasnew.com one. Mike Orren, the paper’s chief product officer and the employee tasked with heading up these changes, says Al Día‘s content will not be paywalled as a result of this new model.

The biggest changes will come to GuideLive, which Baldwin says the DMN is “eliminating… as a brand extension of the Dallas Morning News.” The old GuideLive URL now immediately redirects browsers to a “Things To Do”-branded page under the DMN‘s online arts and entertainment banner. Its social channels, meanwhile, have either already been shifted over to new @DMNfood handles or appear to be in the process of being changed.

Baldwin downplays that anything drastic is at play, noting that the paper is “simply folding [GuideLive’s coverage] in to the main Dallas Morning News website to create a more streamlined user experience.” She adds that the paper intends to be “doubling down on event content and expanding [its] listings dramatically” but that “a lot of that functionality isn’t quite ready yet while [the paper’s developers] clean up from the relaunch.” No changes will be made to the printed weekly “Guide” section the paper produces. Orren notes that event listings will remain free to peruse, but says that DMN articles that would’ve previously been free to consume under the GuideLive banner will now exist behind a paywall.

Regardless, GuideLive’s death marks the end of a four-year experiment launched in March 2015 that asked the offshoot entity’s small, mostly entertainment-oriented editorial staff to operate with the mindset of a start-up media company. It was, in many ways, an extension of the free weekly print Quick product that the newspaper produced from 2003 to 2011, albeit an online-only version that boasted, well, let’s just call it a “familiar” vibrant color scheme.

Some goods new: At least for the time being, it does not seem as if there will be any heads rolling among the DMN‘s editorial staff as a result of the plug being pulled on GuideLive.

In retrospect, however, it now seems clear that many of the paper’s recent layoffs — during which a number of its culture-focused journalists were let go, continuing a disturbing trend long set in motion at the paper and many other area entities like it — were made in anticipation of today’s “streamlining”-branded changes.

That said, editorial staffers we’ve reached don’t seem particularly worried about the state of things at the paper in the wake of today’s changes.

“We’re excited about it,” says Erin Booke, whose title is shifting from GuideLive editor to DMN food and entertainment editor as a result of these moves.

“Bottom line,” Wilson says, “is that we are uniting all of our work under the Dallas Morning News brand.”