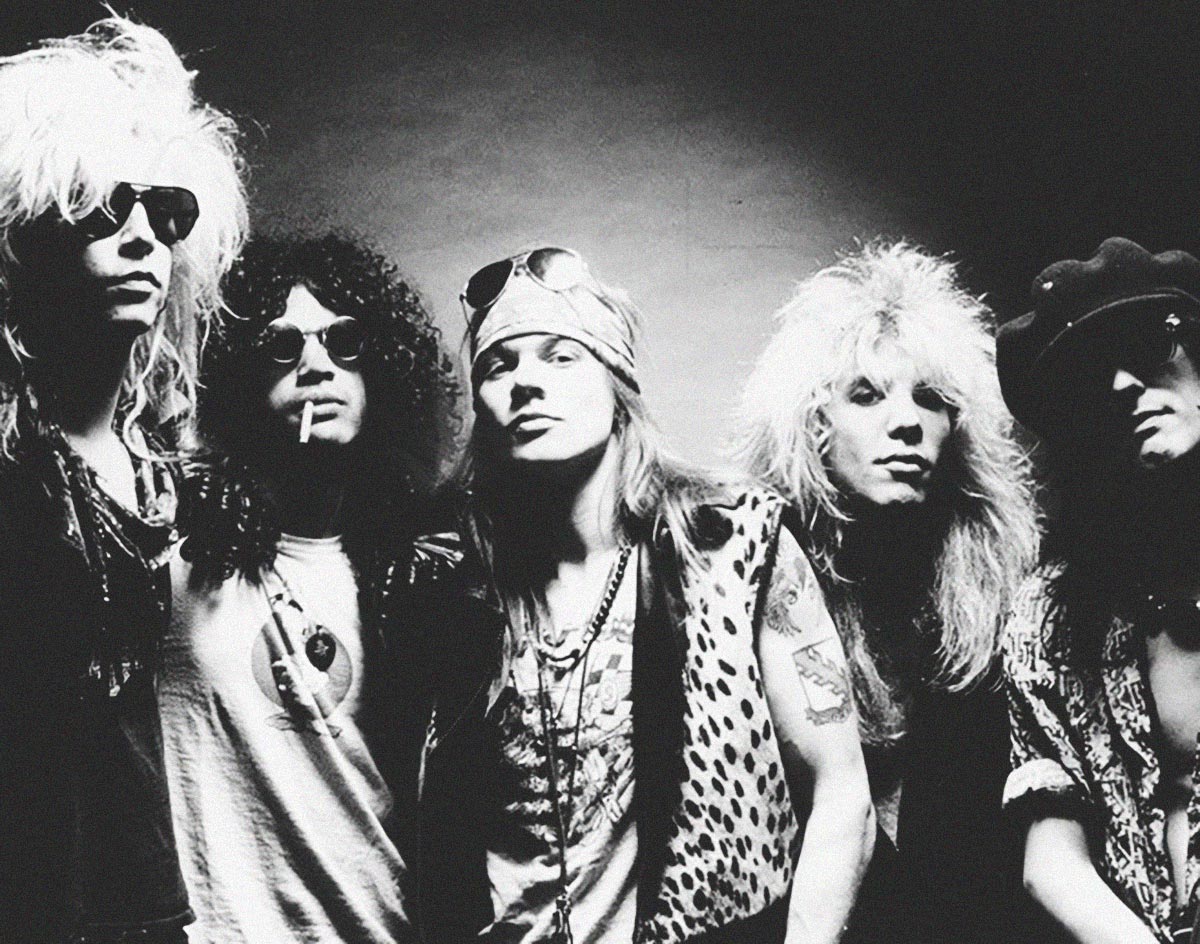 Head Down To Paradise City With Guns N’ Roses, Rock Out For A Good Cause At Jeff Fest 2, Really Tie The Room Together At The Big Lebowlski And So Much More

If it feels like we’re enduring an especially trying news cycle these days, it’s because we are.

It’s a lot to keep tabs on!

There’s the whole situation surrounding the end of an almost-20-years-long Afghanistan War, which while in many ways a good thing, has also just been a complete shit show.

There’s the fact that hurricane season is barreling down upon us, too, with Hurricane Ida pummeling the Gulf Coast and leaving hundreds of thousands — including the entire city of New Orleans — without power for the foreseeable future.

And then, lest anyone’s forgotten, there’s the still-ongoing coronavirus pandemic, which continues to ravage society thanks to the Delta variants’ increased infection rates, the ongoing mask mandate debates and the refusal of many to get vaccinated despite scientific evidence now confirming the safeness of the vaccines.

It’s enough to make you wanna turn off your TV, unplug from news for a while and hit the town — which, if that’s something that appeals to you, we can help you out with via the below compilation of the top events taking place in and around Dallas this week and into Labor Day weekend.

But, please, we implore you: If you’re planning on going out, be careful when doing so. Wear a mask where it makes sense to do so. Get vaccinated. And don’t be a jerk to workers who are enforcing rules they themselves likely didn’t set.

Just, in general, be careful and mindful in your actions — every week, sure, but especially so this week. Keep in mind that Texas is one of five states in the union with fewer than 10 percent of ICU beds available to those in need of hospitalization.

Use your head, OK?

New Found Glory and Less Than Jake at Gas Monkey Bar N’ Grill
My friend may be over you, but they definitely aren’t over their favorite pop-punk songs of the ’00s, many of which will be on blast at this show, which appropriately as part of a tour dubbed the “Pop Punk’s Still Not Dead Tour.”

Guns N’ Roses at American Airlines Center
How many times have you heard “Welcome To The Jungle” blaring over the P.A. system during Mavs games in this venue? Countless, I’d imagine. Well, now you can here it live, as Axl, Slash and the rest of the gang will no doubt be playing it — among other bona fide smash hits from their ’80s and ’90s run as the biggest band in the world — as part of this rescheduled-due-to-COVID performance.

Jeff Fest 2 at Granada Theater
On July 11, you may recall, some big names in Dallas music (and beyond) joined forces for an event called Jeff Fest at the Double Wide — and, in the process raised a total of $83,315.46 for the Jeff Saenz Recovery Project, which aims to help raise funds for Dallas musician and producer Jeff Saenz in the wake of suffering burns all over his body and losing both of his hands in the wake of a freak electrocution incident. With even more money still needed for the noble cause, Jeff Fest 2 will offer up performances from Shakey Graves, The Texas Gentlemen, Charlie Sexton, The Reverend Horton Heat‘s Jim Heath, Medicine Man Revival, Quaker City Night Hawks‘ Sam Anderson, About You and The Retrophonics, plus a silent auction and various items up for raffle. A good cause, no doubt. But that lineup means you’ll hear some great music, too.

Grand Opening Celebration at Dallas Comedy Club
COVID-related frustrations may have spelled doom for the Dallas Comedy House last year, but comedy will live on in Deep Ellum thanks to the arrival of this new venture taking over the same space. While Wednesday night will make the venue’s official opening, the celebration will last six days and feature all kinds of stand-up, live music and karaoke showcases — plus free improv shows — all week long. Peep the club’s calendar for the full lineup of offerings, along with a sense of what their bar and kitchen will be slinging throughout it all.

Coheed & Cambria and The Used at The Pavilion at Toyota Music Factory
Coheed’s “A Favor House Atlantic” still slaps. Same with The Used’s “The Taste Of Ink.” Sing along to these songs — and more! — to your inner teen’s heart’s content at this throwback show. Pro tip from someone who’s attended a lot of shows featuring bands of this era of late: The crowds that head out to these concerts aren’t young any more. And neither are you! We’re all getting old! Yay?

Flosstradamus at Stereo Live
The beloved, previous Lights All Night headliners return to North Texas for another night — albeit with something of a twist. Once a duo featuring Curt Cameruci and Josh Young, the act is now a one-man show featuring Cameruci alone. But the trap EDM at the center of it all still bumps.

Phil Anselmo & The Illegals at Gas Monkey Bar N’ Grill
Listen, the former Pantera frontman is problematic is hell, but this offering is pretty interesting: With that Arlington metal band’s iconic Vulgar Display of Power album about to turn 30 years old next February, Anselmo and his current ban will be performing all the songs from that release at this one. Walk, don’t run, to buy your tickets — if that sounds up your alley, anyway.

Marc Anthony at American Airlines Center
The superstar Latin music crooner, who was pretty darn great in his brief role in the movie musical In The Heights earlier this year, will make all your surely make all your tias swoon at this showcase.

Cana at Three Links
Just as the heavy-hitting band Dezorah was starting to get its footing after having moved to Dallas from its Rio Grande Valley home a few years back, the pandemic hit and derailed its progress. But the band’s members’ creativity hasn’t suffered. At this event, Dezorah members Danica Salazar and Johnny Garza will celebrate the release of their synth-pop side project Cana’s debut Luvfield EP, which actually dropped back in November of last year. But, y’know, there was that whole pandemic thing. Good on them for pushing forward!

Shlohmo and You Us We Them at Deep Ellum Art Co.
The Los Angeles-based, distortion-loving experimental EDM producer Shlohmo stops off in Deep Elum for a performance opened up by the local cinematic soundscape act You Us We Them.

Riverfront Jess Festival at The Black Academy of Arts & Letters
The fourth annual celebration of North Texas jazz will take place across three days and in venues across the city, although many will be centered around the Kay Bailey Hutchison Convention Center-attached TBAAL venue. Performers include Raheem Devaughn, Dwele and festival co-chair (and Dallas legend) Erykah Badu. Head here for the full lineup schedule.

The Big Lebowlski at Bowlski’s
The venue formerly known as the Lakewood Theater recently underwent a renovation to turn it into a bowling alley, which is the short story version of how this Big Lebowski-themed event came to be. At this party thrown in honor of the 1998 Coen Brothers classic, DJs Blake Ward, Mutemor and Kate Siamro will spin tunes from the film (but presumably no songs from The Eagles) as crowds dolled up in their cosplaying best will drink white Russians and do their best to avoid gutter balls. Best costume wins $100 in cash!

Fourth Birthday Bash at Top Ten Records
The little Oak Cliff record store that could celebrates its fourth birthday under its non-profit banner with performances from local acts The Boozy Moods, The Sewing Jar, Atom & EV and Long Black Car.

The Offspring, Chevelle, P.O.D and Candlebox at Dos Equis Pavilion
Are you just a sucker with no self-esteem? Join The Offspring and a whole bunch of rock-radio favorites on this bill, which will also serve as the 2021 version of local rock station 97.1-FM The Eagle’s annual BFD concert.

All Travis $cott and Kid Cudi Everything at Trees
Presumably because an all-Kid Cudi set might get the stands too in their feels, DJ Brndn Blue is also including Travis $cott songs into the mix of his latest All/Everything offering.

Between The Buried & Me at Trees
This prog-metal band’s show appears to be sold out based on the ticket sales links we’ve seen, but we just wanted to point out how, even more so than in usual times, this is just a really unfortunately named band to be catching during a still-ongoing pandemic. Try not to think about it, we guess!