How To Open A Successful Bar In Dallas. 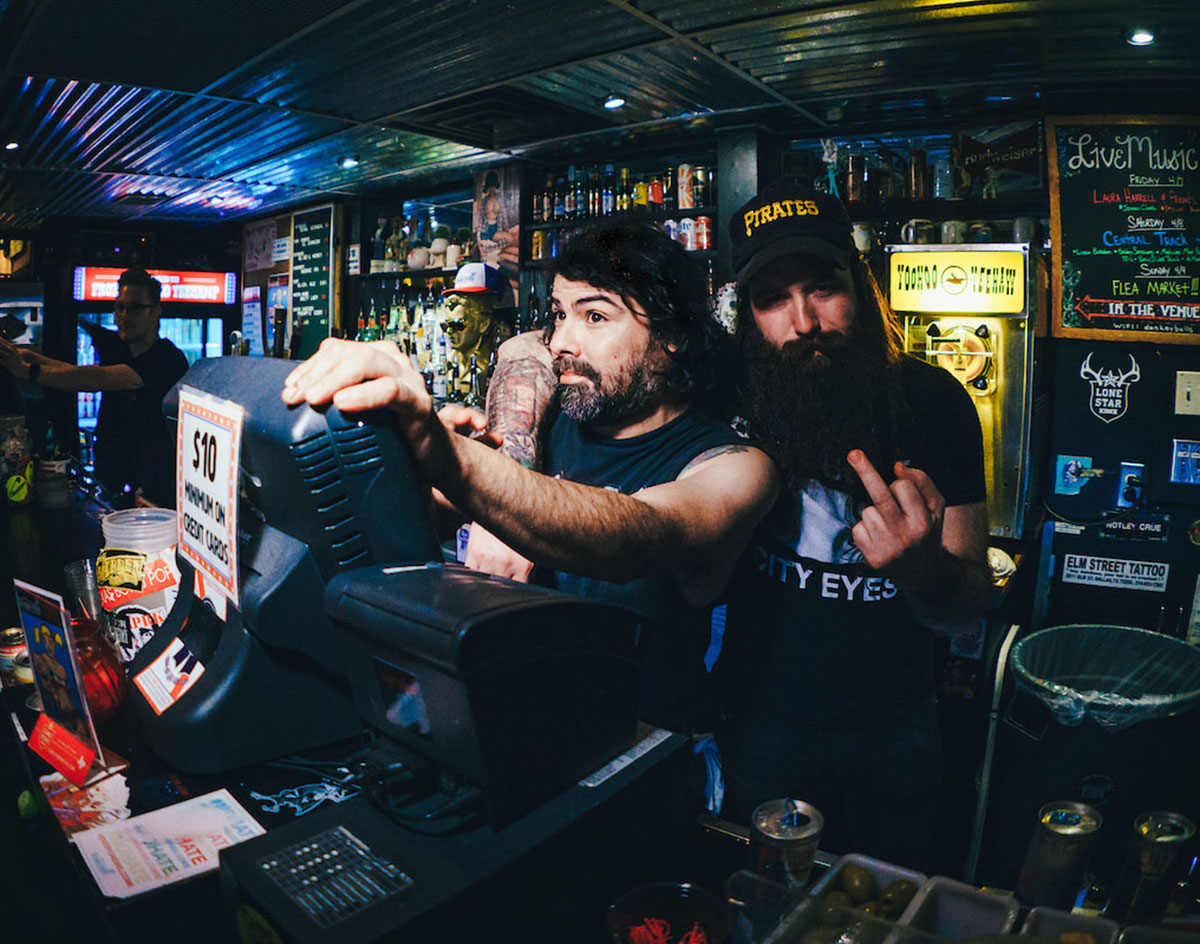 Over The Years, DJ Blake Ward Has Learned A Thing Or Two About What Makes A Bar Or Club Thrive In The Dallas Market. Here, He Shares That Knowledge.

Blake Ward is a Dallas-area DJ and promoter who regularly spins at Beauty Bar, The Double Wide, The Stoneleigh and other established institutions around town. He is also the founder of the Four Four Agency, through which he represents a slew of other area DJs and handles their bookings. So when he has something to say about the city’s nightlife scene, it carries some weight. After a recent Facebook post Ward shared on the subject of opening new nightlife spots around town, we asked him to expand those thoughts some for this piece you’re reading here. Enjoy.

For the past decade, I’ve worked as a DJ and promoter across the full spectrum of the service industry — from upscale night clubs to dirty dives and everything in between. I have seen what works in Dallas nightlife, and what doesn’t.

Keeping tabs on this sort of thing is part and parcel to any success I might have in this industry. It’s my job to stay ahead of the curve and to try finding the next big thing, all while staying true to my own interest of keeping things fun.

What I’ve noticed lately, as Dallas undergoes major changes in the form of massive apartment complexes popping up everywhere and nightlife seemingly consolidating in Deep Ellum, is that this city is not by any means in need of another bottle service club or ubiquitous cocktail bar.

It’s also not a city that needs more of the same, which is unfortunately what it serves up a lot of the time.

Consider some recent successful bar openings in town, and all of their glowing centerpieces that were intended to create social media buzz: Citizen‘s selfie booth; the scripted inspirational or ironic neon signs at Moxie’s, So & So’s (now Parlay), Sidebar and The Belmont; the flashing “No Request” sign at Beauty Bar; and Stirr’s pseudo-inspirational stair cases. Each of these elements was meant to create Instagrammable content, which patrons loved. But, as fun as these things indeed are, trendy gimmicks like them never last long. And Dallas patrons? They crave the next hottest thing.

Satisfying that want is of course no easy feat. But it’s not impossible. If I’ve learned anything through my work, it’s that, if you want to open a successful bar in Dallas, there are three paths to keep in mind — directions that never go out of style and that, even if they won’t necessarily guarantee you success, should at least help you get going off on a good start.

Looking to actually make some money? Don’t stray too far from the path.

The establishments that rule the revenue charts in Dallas are places like Happiest Hour, Katy Trail Ice House, The Rustic, Clutch, Stirr and Moxie’s. These places thrive thanks to their prime locations in population centers and/or entertainment districts, their easy-to-sing-along-with soundtracks and the fact that they don’t push many envelopes. Basic as they may be, and ridiculed though they may be in certain circles for that, the fact is there’s nothing wrong with these mainstays — and I’m certainly not here to attack them. Every city needs nice-looking, comfortable hangouts.

Are they lowest common denominators. On paper, perhaps. But each of them has something else going for it, that gives itself a leg up. The Rustic is, if only by default, Uptown’s best music venue, and it has become a go-to stop for up-and-coming acts on the Red Dirt country circuit. The rooftop at Stirr, meanwhile, boasts the best view of the Downtown Dallas skyline in all of Deep Ellum. Happiest Hour is a legitimately solid and truly convenient options if you’re looking to grab a drink either before or after checking out a game at the American Airlines Center. And Katy Trail Ice House, with its outdoor patio and proximity to the trail for which it’s named, gives off an air of activity that certainly hits home with Dallas’ more outdoorsy sets.

Do I personally spend much time in these places? Not really, if I’m being honest. But their profits don’t lie, and there’s a reason Dallas patrons continue to frequent these tried-and-true concepts — proof positive that, if you can nail down a great location and provide a concept that will placate the masses, money will follow.

All this said, I’m more interested in writing about what Dallas wants out of its next wave of bars rather than options like this, which we already know the city will continue getting in perpetuity.

Authenticity is not bought; it’s earned. And trust me when I say that Dallas will reward you for your hard work if you really deserve the accolades.

Places that stay open long-term in this town are speaking from the heart instead of relying on flashy concepts or gimmicks. Sure, everyone wants to be cool, but chances are you aren’t Gabe-Sanchez-at-Black-Swan-Saloon cool. Seriously, good luck trying to concoct better drink than that guy can make on a whim — and, more impressive, while engaging in multiple conversations with those who are belly-up to his bar and never making anyone feel ignored. There’s a reason T-shirts bearing the name of Sanchez’s bar have traveled to more countries than I have, and it’s because passion can’t be faked. Sanchez isn’t some guy who one day decided along with some buddies that it’d be cool to open up a bar, and tending bar isn’t just some way for him to pay his bills. Running the Black Swan Saloon is his career, and he treats it as such.

Just down Elm Street, though, at a newly opened spot called Shoals Sound & Service, you’ll find a place that actually does give Gabe a run for his money. But it too is explainable, given that industry vets and ace bar men Michael Martensen and Omar Yeefoon are behind the stick here, playing classics that vibe with the place and turning your mom’s bologna sandwich in to a masterpiece.

On the more lively, party-oriented side of things, places like Beauty Bar thrive on this same principle. As a resident DJ here, I can confidently say that the reason Beauty Bar has been around for so long is because the DJs that have weeklies here are straight-up world-class — and, I promise, I’m not talking about myself. Red Eye is a goddamn treasure, and there’s a reason why he gets booked to shows in London. Meanwhile, DJ Sober is named the top DJ in town year in and year out for good reason — the guy can read a room and get a crowd shaking like no other. The combined efforts of the entire Beauty Bar crew are proof that you don’t need a $100,000 sound system — or even a single disco ball — if you focus on one thing and you do that thing right.

That’s what Black Swan, Shoals and Beauty Bar are all such successes. They took a simple concept that people desired, and figured out how to do it better than anyone else, all without going too over-the-top or selling out their souls in the process.

Of course, there’s nothing inherently wrong with going over-the-top if you do it right. And this is one area in which Dallas is a little lacking.

Yes, Dallas is hurting for some truly peculiar places. Too many spots are just knockoffs of other successes. But it doesn’t have to be like this. Instead, I would recommend taking notes from places like The Museum of Ice Cream, Yayoi Kusama’s Infinity Room concepts, Meow Wolf, The Museum of Sex and other similar spots. While very few of these are actual dedicated bars or nightlife hubs, these concepts are unquestioned selfie factories and any bar that could incorporate ideas of this ilk would surely benefit. Take, for example, the Stranger Things pop up bar in Chicago, which really hit the mark by catering to the show’s dedicated fandom.

A recent local example of this can be seen in the form of the Design District barbecue joint and beer garden, Ferris Wheelers. Give Brandon Hays and his crew over there credit: Understanding the need for their place to have some personality, they installed a damn Ferris wheel on their patio and were so committed to that idea that they named the whole joint after that attraction. Need proof that it worked? Look up any local media story about this spot’s opening — and there were plenty of them — and take note of how many focused on the Ferris wheel as a major part of their coverage. (Hint: It was every single one of them.)

Of course, this isn’t a new idea, either. The Double Wide in Deep Ellum certainly has for years been a hit among locals thanks at least in part to its white trash theme. In fact, the model was such a winner that it even earned owner Kim Finch a spin-off location in the form of The Single Wide on Lower Greenville. Honest question: Are you even really a Dallasite if you haven’t had a Yoo-hoo Yeehaw? I’m not sure you are.

So what’s the lesson here? People love a good theme! I think this is why my Disco, TX party series has been successful. Whether these events have been oil money-, disco-, cult– or Friday The 13th-themed, people have been quick to embrace the opportunity for a collective experience alongside folks who share their passions. Will you get walk-in traffic at a costume party? Probably not. But you can rest assured that everyone in the room actually wants to be there.

When you look at the wild things happening currently in Tokyo — like at Robot Restaurant in Shinjuku, where animatronic robots exist within a futuristic ambiance — it’s clear that the majority of nightlife establishments in the U.S. are lacking in personality. Sure, generic mega-clubs still rule in places like Vegas and Miami, but new breeds of dance parties are taking note from ’90s club kids and the hedonistic disco days of Studio 54 by bringing self-expression back to the foreground. Los Angeles’ roving polysexual party Rhonda and Brooklyn’s House of Yes are great examples of how moving beyond the norm can breed success and interest.

I understand that people in Dallas will always spend its money at a places like Stirr. That’s a given. But, in the future, I would ask that owners push the envelop by injecting a little something extra into their concepts. They might be surprised to see how embraced their efforts at going the extra mile will be.

Everyone knows the role that nightlife can play in helping a city develop a cultural identity. Putting a little extra thought and care into the process isn’t asking too much.

Lord knows we’ve got the money to do it here. We just need someone with the know-how to take a look around, see the cues everywhere and give our city a chance to flourish more greatly in this department.

Truth is, we can and should do better. It’s high time we finally did.