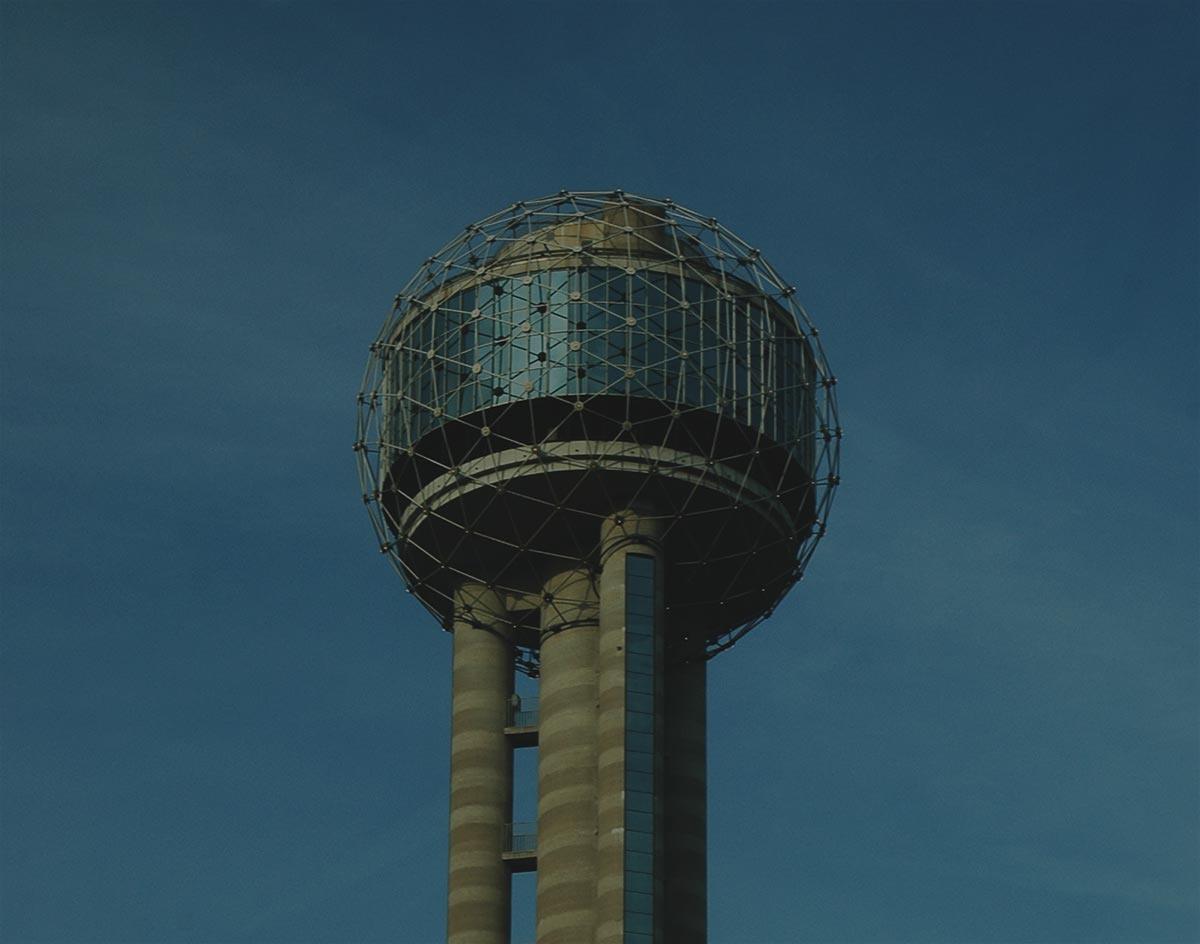 Judge Clay Jenkins Issued A Shelter-At-Home Order Starting At 11:59 P.M. On March 23 As Part Of The County’s Continued Response To The Coronavirus Pandemic.

At a press conference on Sunday evening, Dallas County Judge Clay Jenkins issued a “safer at home” mandate — otherwise known as a shelter-in-place order — for all residents within Dallas County.

Under the order, residents are not to leave their residences — with one notable exception being for trips to grocery stores, pharmacies, liquor stores, gas stations and other supply stores, including convenience stores. (The order also sets a mandatory limit on toilet paper sales of no more than 12 rolls per person until the supply chain meets demand or the order has been lifted.)

Nonessential businesses are to close activities at facilities within the county. Where possible, working from home may continue.

Restaurants, breweries, wineries and distilleries will also continue to be allowed to offer take-out and delivery services. Statewide, all dine-in offerings at these businesses have already been ceased.

Laundromats will remain open. DART will continue operations as well.

All private gatherings of any number of people outside of a residence are prohibited, including religious services, which are encouraged to take place via teleconference where possible.

Individuals may use outdoor spaces for exercise, but are to “as reasonably as possible” practice social distancing and maintain six feet of distance — and no closer, as has been seen at some public trails and parks as recently as this week.

Jenkins’ order comes in the wake of a Sunday afternoon press conference from Texas Gov. Greg Abbott in which he stopped short of issuing a statewide shelter-in-place measure, but said he “would applaud” local leaders who issued such orders over their jurisdictions.

On Sunday, Dallas Mayor Eric Johnson publicly released a letter to Abbott requesting that such an order be issued statewide. Last week, City Council extended the state of disaster declaration in the City of Dallas through April 29.

In a statement released on Sunday evening, Mayor Johnson offered support for Jenkins’ order: “We are still working through the language of the county’s quickly evolving orders and discussing the best ways to enforce these orders citywide, but I support a stay-at-home approach to slow the spread of COVID-19. While this approach likely means our city will experience economic difficulties, our top priority is public health, and it’s vitally important that we take the steps necessary to save lives and prevent strain on our healthcare system.

“I am confident that regulations such as Dallas County’s most recent ones will help flatten the curve of COVID-19’s spread in Dallas, but this disease does not respect political boundaries. Therefore, I believe a statewide or regional approach, as opposed to a county by county or city by city approach, is the best way to defeat this pandemic and defeat it quickly.”

Dallas County health officials announced 36 additional positive cases of coronavirus on Sunday, bringing the total in the county to 131. Officials also announced the county’s second death on Sunday. The positive cases are not just among the elderly; young people are testing positive as well.

All of which is to say: Keep staying the fuck home, and continue to wash your damn hands.

You can read the order in its entirety below. 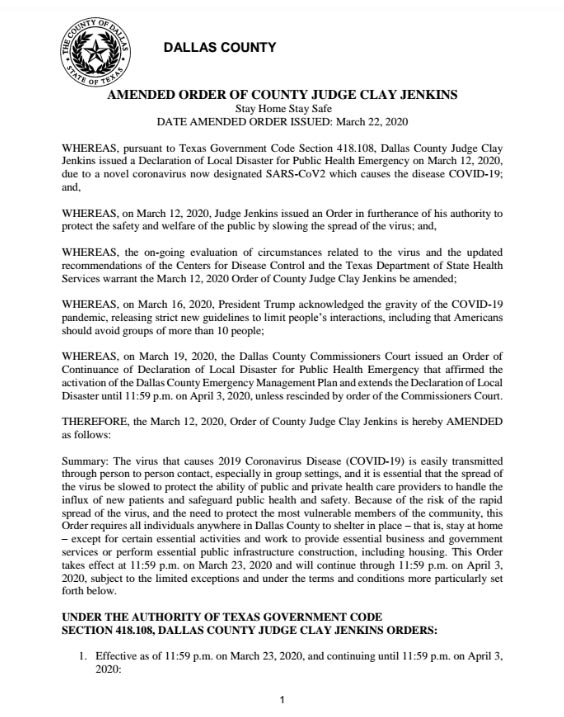 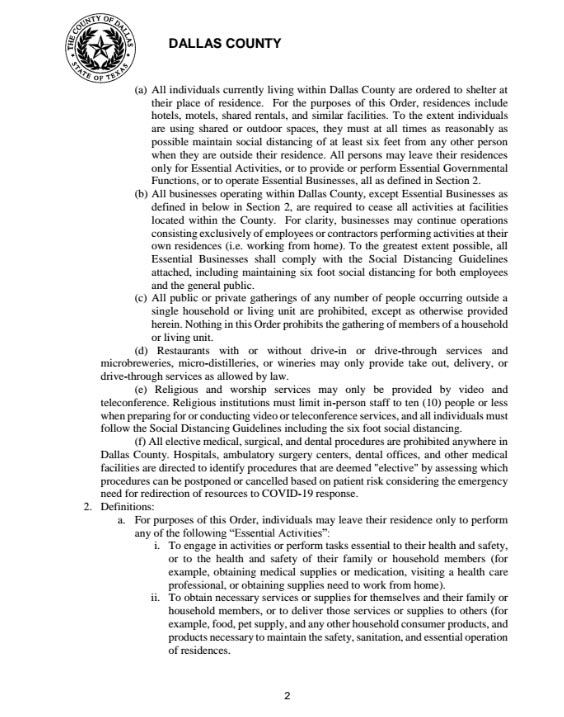 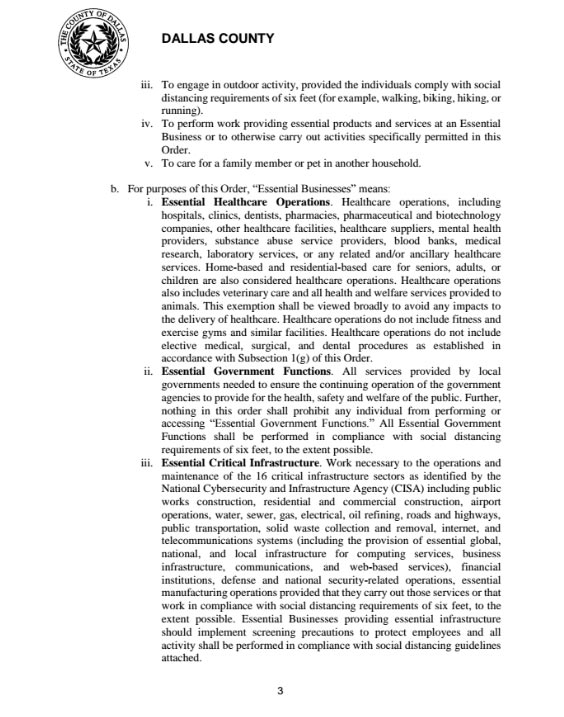 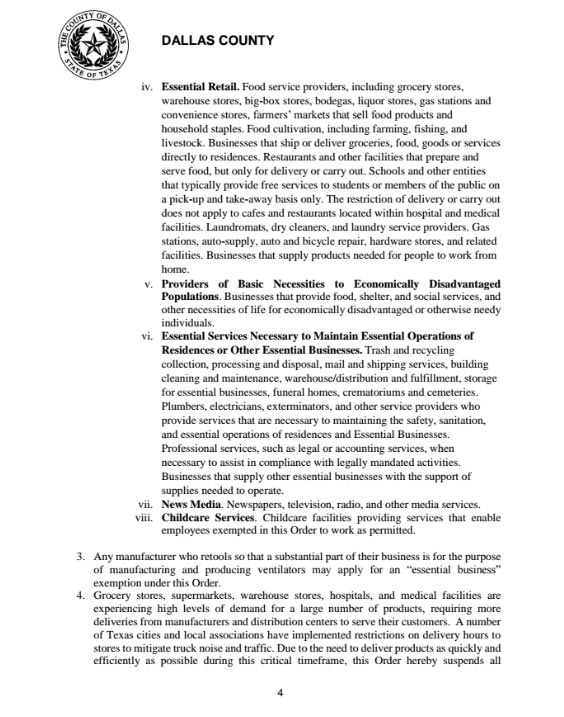 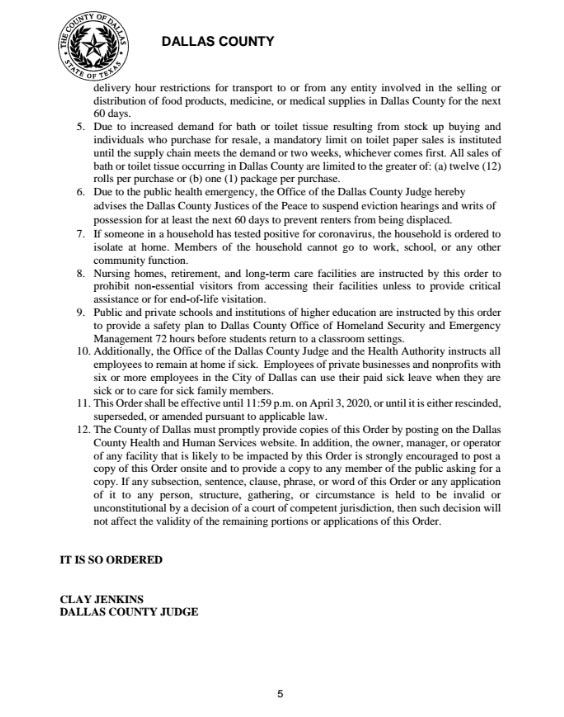 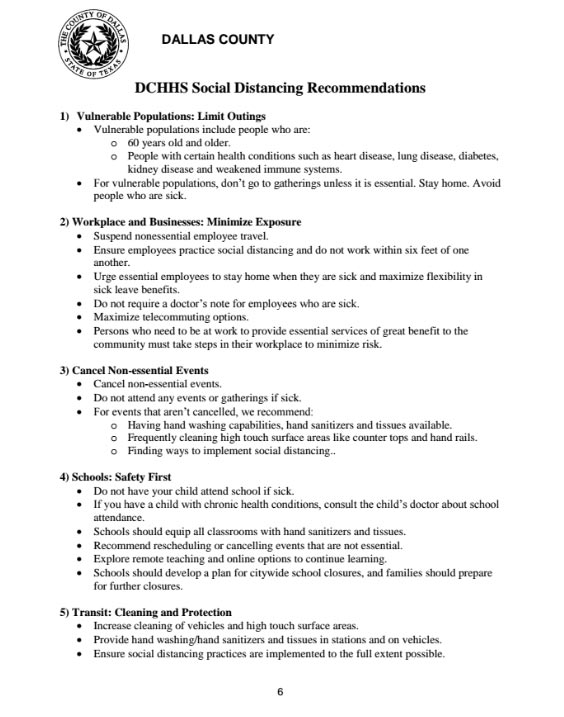 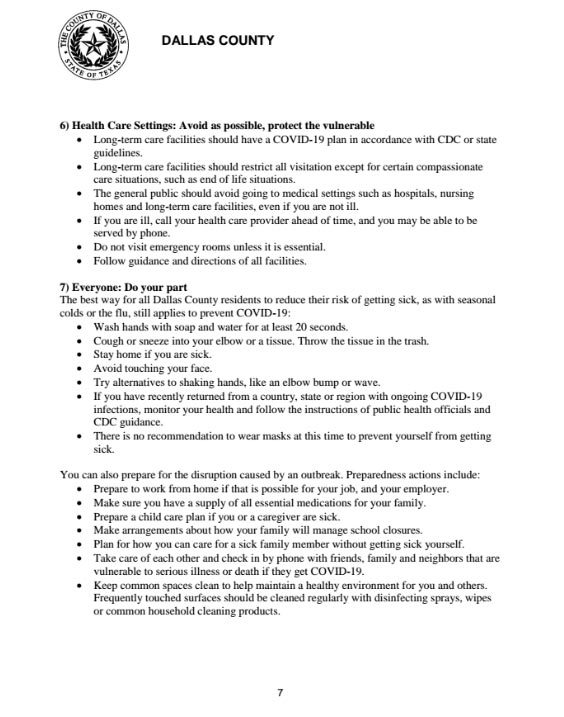