A New Crowdfunded Anti-Trump Billboard Is Up In Dallas. 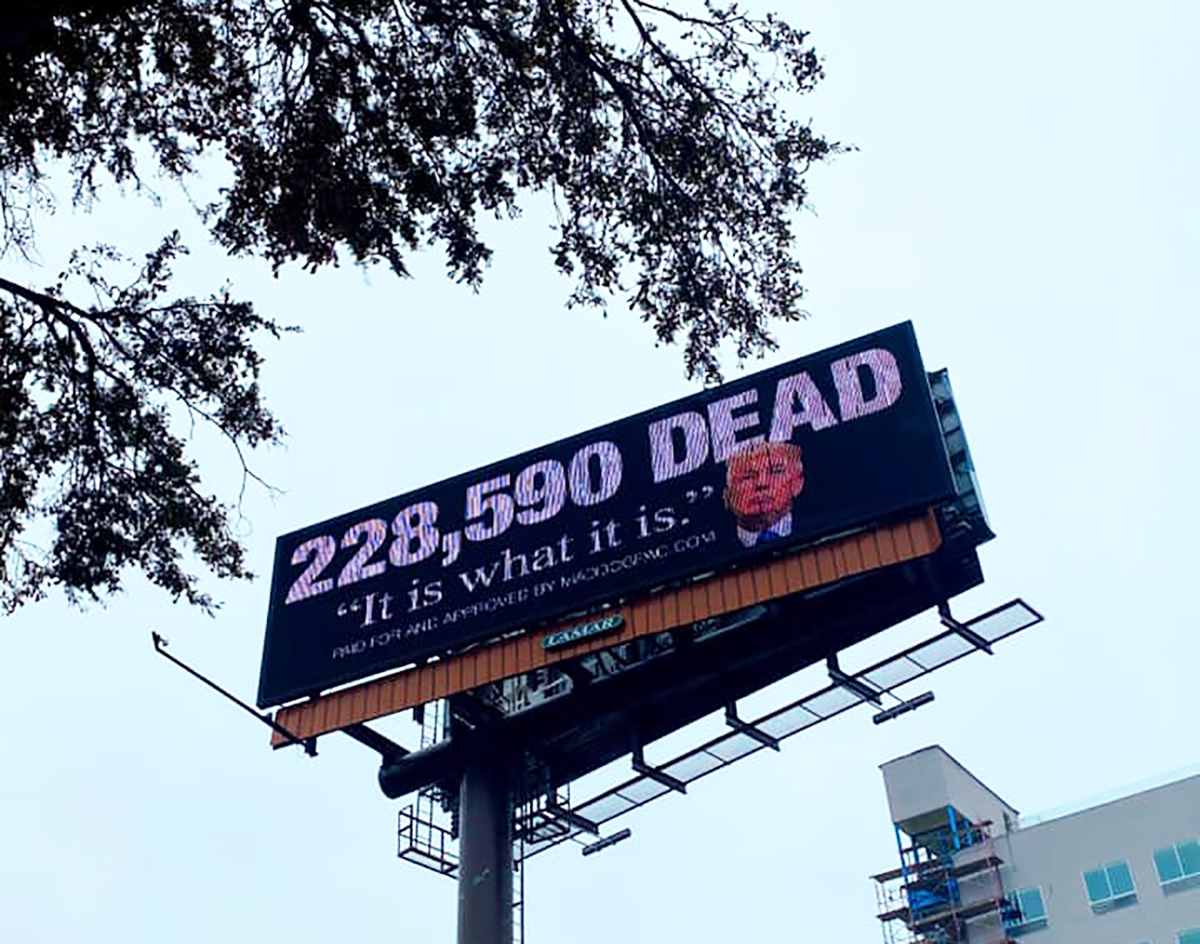 Now Spotted Along I-35E In Dallas: A Billboard Critical Of Donald Trump’s COIVD-19 Handling That Was Crowdfunded By A Local Fitness Influencer.

While driving past a billboard reading “TRUMP MATTERS. United We Stand, One Nation Under God” that had suddenly appeared off of the Central Expressway near Downtown, Dallas resident Maria Gregg had what she describes as a “fuck it moment.” Feeling frustrated by the message, she immediately began brainstorming ways to counter it.

“For a lot of people, the way [the Trump] administration has handled the coronavirus has been eye-opening,” Gregg says. “There’s actual blood on [Trump’s] hands — a lot of it.”

After looking into everything it would take to purchase a billboard of her own — and realizing she didn’t have enough time or resources to do it alone — she turned to a political action committee that she’d been following on social media called Mad Dog PAC for help. The organization, which supports Democrats and runs various political billboards across the country, was down to help — with the caveat that Gregg raise the $4,000 to fund the advertisement on her own.

Gregg, a local fitness influencer with more than 10,000 Instagram followers, was up for the challenge. Last week, between sharing photos of her dogs and workout routines to social media, she started sharing an Actblue link  to her stories provided by Mad Dog where people could help her raise funds for the effort. With the support of 250 individual donors, she accomplished her crowdfunding goal in less than 24 hours.

Those funds secured, Gregg and Mad Dog PAC officially purchased a digital billboard featuring a national COVID-19 death count that’s updated daily and is paired with Trump’s now widely repeated August response of being “it is what it is.” It went live on Tuesday, October 27, and can be seen by Dallas drivers along the northbound lanes of I-35E, just past the Oak Lawn Avenue exit.

IT IS UP! ⁣ (smiling that I got this board up – not about the message on it, obvi) ⁣ ⁣ Last week I was driving in Dallas and saw a “Trump Matters” billboard and decided I wanted to get my own put up. I thought about fundraising for it, but realized I didn’t have enough time to start and officialize my own PAC. I slide into the DMs of the founder of my favorite one (@maddogpac). He told me I had 2-3 days to raise the money or it wasn’t realistic.⁣ ⁣ WELL! Just 22 hours later I raised the money with the help of over 250 donors from all over the country. The billboard will be up now through November 3rd @ 11:59pm. ⁣ ⁣ You know who matters? The 228K+ innocent lives that were lost due to the blatant neglect from the President. ⁣ PS. Go vote. That shit matters too. 👊🏼

Though it went up with only a week to go before Election Day, Gregg’s effort is hardly in vain. Recent polls have shown likely voters prefer former Vice President Joe Biden to handle the pandemic by a wide margin.

“Maybe it’ll get some swing voters,” Gregg says. “A big factor for me though was for the people who might be on the fence about not voting at all. I wanted to do something that would be in their face.”

Thing is, voting already is at an all time high in Dallas County. On Friday, Dallas County Judge Clay Jenkins announced the county had already broken its all-time record for votes in an election.

For her part, Gregg admits she had initial concerns of upsetting her followers with her push, but also says she felt like the stakes were too high to stay silent.

That meant, she laughs, staying true to her reputation of being outspoken.

“I’ve definitely lost [followers] and for sure pissed a lot of people off,” Gregg says. “But at the end of the day, I’d rather be known as the person with a platform who uses her voice.”