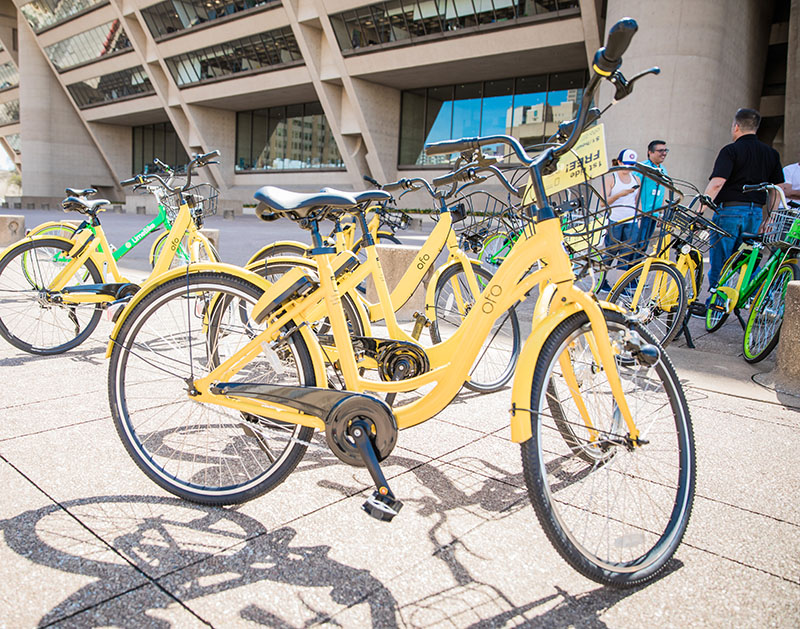 Dallas Has 18,000-Plus Rental Bikes On Its Streets — And Now Motorized Bikes And Scooters Are About To Enter The Market. Does City Hall Have Any Plans To Regulate This Shit Yet?

Seven months into bike sharing’s arrival in Dallas, it’s safe to say that everyone has an opinion on the relationship our city is developing with the startup companies who appear to be scattering their wares, well, pretty much everywhere.

It’s tough not to. We’re not even two-thirds of the way through our fist 12 months with dock-less bicycles dominating the cityscape, yet it feels like those suckers are in every single headline we read, doesn’t it? A few of the highlights:

But what’s the latest news? How big have the fleets become? What action — if any — is the city taking toward regulating? What’s next as far as innovations in the bike sharing world come?

Convenient you should ask those three specific questions, as we have answers for exactly those!

If it seems like there are a lot of bikes in Dallas, that’s because there are. In November, speculation was that the city would have as many as 7,000 rental bikes scattered across city limits. But it turns out that that seemingly impressive-sounding figure was insanely conservative. That’s because, at this point, the figure is already more than double that estimate.

According to a CBS 11 report, Dallas currently boasts between 18,000 to 20,000 rental bikes within city limits. That figure would is large enough for Dallas to claim the title of the biggest bike share fleet in the U.S.

Given the fact that Dallas isn’t exactly a bike-friendly city, it’s a legitimately fair question to ask at this point if there are more bikes than the city can handle.

Last Friday, a group led by DallasBikeMess Instagram account manager Josh Miller headed over to Dallas City Hall on rental bikes. Their sole purpose? Just to dump a whole bunch of the suckers on the doorstep of our city government’s home since it seemed like there were’t as many bikes regularly found at City Hall as elsewhere in the city.

Miller and his fellow cyclists wondered if this was a collective effort on the part of the bike companies. As if, by making sure the bike situation is covered well in the lap of the government, our elected officials might not realize how crazy the situation is elsewhere in the city. Friday’s stunt was simply an effort to raise awareness for those folks, Miller says.

“The city doesn’t seem to have a coherent plan for dealing with these bikes,” Miller says, while acknowledging that he is not against the bike sharing systems, but simply in favor of more regulation. “For us, this is our way of petitioning the city and telling them that there’s just way too many of these bikes.”

Seems one bike share company — ofo — caught wind of Miller and his co-conspirators’ plans, though. Immediately after its bikes being dumped at City Hall on Friday, Miller says he saw ofo employees arrive on the scene and immediately whisk their bikes from the bunch.

Regardless, City of Dallas bicycle transportation manager Jared White assures us that he’s quite aware of bike share situation citywide. And while it might not look like much is being done about the bike mess, he says that guidelines are currently being drawn up for future city council approval.

“We’re not limiting number of companies or the number of bikes,” White says of the plan he’ll soon propose. “But we are going to get into where they can be dropped off, how long they can sit there without being used and address the response times of the bike share companies when picking up their bikes.”

Also being considered as part of the plan? Collecting application fees from bike share companies upon entering the marker, fining the companies that fail to collect their rogue bikes in timely fashion and charging the companies a per bike rate so as to encourage a more efficient rental bike deployment tactics than the “more the merrier” ones more prominently used at the moment.

Smaller cities in the area have already instituted some operational guidelines for their markets. Plano enacted an ordinance that gives city management the authority to create rules about where bikes can be placed, how many bikes can be placed in one area and how often the companies must collect bikes. Denton has instituted a permit application program for bike share companies looking to operate within its city limits — and, already, it’s acting as something of a deterrent with VBikes pulling out of the market after that rule being put in place. In Highland Park, on the other hand, they just outright banned bike sharing and gave its city maintenance crews the authority to impound bikes for future auctioning if they’ve been left uncollected in 15 days.

While White understands the desire for such swift regulation, he also says it’s important for Dallas to be open-minded about the possibilities that bike share programs can open up for a city. He wants to be sure that any rules Dallas may eventually pass on this front will curb frustrations without handcuffing the cultural benefit that bike share companies can provide a market.

“This situation is new to the U.S.,” White says. “Nobody knows how to do this. Some cities have put up ordinances severely limiting their operation or outright banning them. We’re all talking to each to each other — with places like Seattle and New York — to figure out how to deal with this.”

Motorized Bikes And Scooters Are Slated To Hit The Market Soon.

Bikes you have to pedal are so 2017: As soon as April or May, LimeBike will also be offering electric bikes and motorized bright green scooters in Dallas — entries into the market that the company says will replace part of its own 10,000-strong fleet rather than adding to it — just as it already offers in San Diego and Washington D.C.

City code bans the use of such small motorized vehicles like these on sidewalks, streets and bike lanes, so it’s a little unclear how exactly these new additions to the market will be legally allowed to operate here — White says internal discussions to amend city code are being had.

If anyone at City Hall needs a cue for how the people of Dallas want to use these motorized vehicles, the answer — even if it’s in jest — might be found in the demands of their constituency. According to a Facebook event scheduled to take place on April 1 (har har), the streets of Deep Ellum are being readied to host a Motorized LimeBike Jousting Tournament.

The crux of the idea? If you can’t beat them, join them — or at least open your arms to the possibilities.

Reads that truly medieval event description: “Let’s welcome our new overload transportation devices by being the first neighborhood in the U.S. to hold a proper tournament with motorized jousting.”