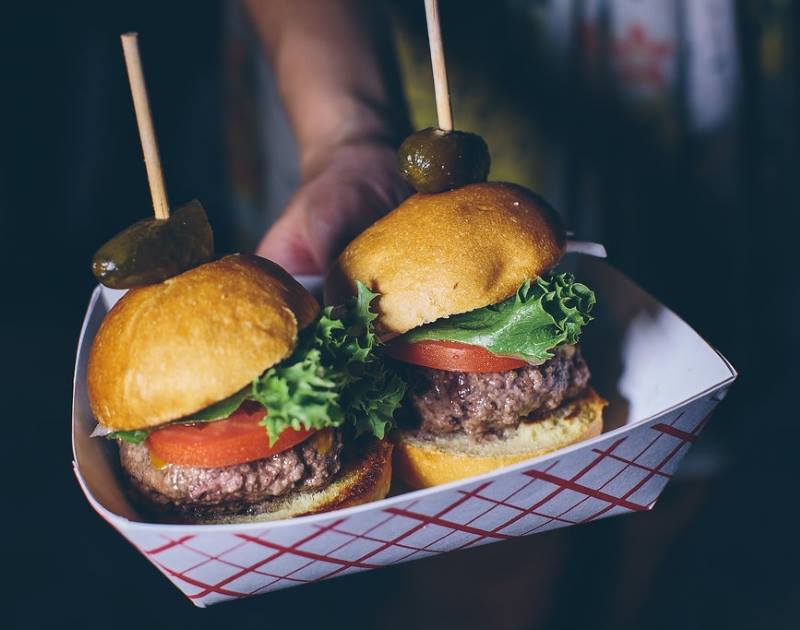 Screw The Drive-Through: These Dallas Spots Prove That You Can Still Grab A Great Meal Even When Hunger Strikes After Midnight.

Even in a city like Dallas, what with its robust — and don’t forget profitable! — nightlife scene, we all still have to reconcile a larger fact of life once in a while: Not every restaurant in town is guaranteed to stay up as late as you do.

Still, you can definitely eat like a boss into the wee hours across Dallas. You just need to know where to look.

Fact is, this city actually boasts a surprising depth of restaurants that cater to night owls — and we’re not just talking fast food joints or 24-hour breakfast chains either, although Dallas sure has its share of those. We’re talking about spots that prove that food-lovers need not mind the clock in order to catch a tasty, sit-down experience in this town.

These places do more than just stay open past 11 p.m., too; they frankly reflect a wide variety of Dallas’ cultural and culinary offerings.

Doesn’t matter if you’re looking to satiate your post-bar appetite, to fuel up while burning the midnight oil or to curb those nighttime munchies, these late-night bite destinations offering a little something for everyone.

Armoury, D.E.
Deep Ellum (4 p.m. till 2 a.m. Monday through Thursday, 11 a.m. till 2 a.m.)
Located right in the heart of Elm Street, this bar draws people in with its comprehensive whiskey list and promise of live music out on its back patio on the weekends. But it’s the food, with its Hungarian bent, that keeps people coming back on the regular — particularly its burger offerings, which among the tops in town thank in large part to their willingness ot get a little experimental with their add-ons.

Adventures In Ordering In… so we got home after midnight last night, and that plus being out of town for over a week meant phoning this one in, pretty literally, with my handy-dandy @favor app. I felt like Mediterranean food, so we gave @bigguyschickenandrice a try. Spicy and rice-y, just like I like it. Use code FOODBITCH for $5 off when you get #AnythingDelivered. #sponsored #verbpartner

Big Guys Chicken and Rice
Deep Ellum (11 a.m. to 4 a.m.)
The New York-inspired chicken and rice spot is a quick way to satisfy nocturnal cravings for less than $10 a meal. While the menu specializes in halal-style rice bowls and gyros served with your choice of protein, there’s also options for waffle fry bowls or adding fries to your gyro for an extra crispy layer.

A spread worthy of the whole gang. 😋

Brick & Bones
Deep Ellum (6 p.m. to 2 a.m.)
Opened in 2015 specifically as a late-night dining destination, Deep Ellum’s Brick & Bones isn’t just a great place to get your fried chicken fix late at night — its decidedly Mexican take on the favorite makes it one of the top destinations in the city no matter the hour. The chicken fingers put chain options like Raising Cane’s to shame, as does the recently added BnB Bowl option that elevates the KFC Famous Bowl concept to new levels thanks to its combination of chicken, wasabi mashed potatoes, ponzu gravy, corn, cheddar cheese and scallions.

Crushcraft Thai
Uptown (11 a.m. to 3 a.m. on Fridays, 11:30 a.m. to 3 a.m. on Saturdays)
This popular Uptown spot boasts extended kitchen hours on weekends for those craving Thai food. The fast-casual concept offers affordable options, with menu price points ranging up to $10. The Routh Street location also features a variety of local beers on tap, in addition to imported Thai brews and beer towers for those looking to liven up the night.

Dalat
East Dallas (11 a.m. to 2 a.m.)
This Fitzhugh Avenue favorite offers Vietnamese-American dishes, plus a few off-menu items for the more curious palates out there. The menu is stacked with rifts on familiar dishes like bánh mì (served in taco and burger styles), Vietnamese-style chili, eggs benedict made with Chinese sausage and the appropriately named “Dorito Viche.”

Dal Dong Nae
Northwest Dallas (5 p.m. to 2 a.m. Tuesdays through Saturdays)
Diners looking for authentic Korean food just have to wait until the sun goes down, as this hidden gem off of I-35 opens only for dinner and late night hours. The restaurant offers cures for the post-club crowd, with plenty of traditional Korean dishes to soak up a night of drinking.

Ddong Ggo
Carrollton (5 p.m. to 2 a.m.)
This Korean gastropub’s crass name (it translates to asshole) is perfect for late-night foodies with a sense of humor. Even more of a draw is its menu of fusion dishes, such as Korean fried chicken fondue and nacho Cheetos fries. The portions here are almost ideal for sharing, with the most expensive price point sitting around $25 a pop.

Easy Slider
Deep Ellum (11 a.m. to 2 a.m. on Thursdays through Saturdays)
The brick-and-mortar offshoot of the popular food truck extends its kitchen hours to serve its famed handheld burgers until 2 a.m. to the late Deep Ellum crowd three days out of the week. For the price of a single burger elsewhere, Easy Slider’s menu enables you to try multiple gourmet burger options, such as the infamous Sweet & Lowdown that’s made with strawberry jam, goat cheese and bacon.

Hello, we wanted to fill your newsfeed with some eye-candy. You’re welcome! 😉

Fuel City
The Cedars (open 24 hours)
OK, so maybe this falls a little out of the purview of this piece, given that this original Fuel City location is just a window in a gas station and your sit-down options are either a handful of picnic tables around the corner or the hood of your car. And maybe these aren’t the best tacos in town, as so many have pointed out in recent years. But there really is no late-night dining scene quite like this one anywhere else in Dallas — or points beyond, for that matter — as hungry drunks from across the city descend upon this gas station to fill their bellies before heading home for the night. It’s a scene one must experience for themselves to appreciate. If your expectations are low, and your fondness for people-watching is high, there’s no better spot in town.

Greenville Avenue Pizza Co.
Casa Linda. (11 a.m. to 1 a.m.)
Lower Greenville (Monday till 1 a.m.; Sundays, and Tuesdays through Thursdays till 3 a.m.; Fridays and Saturdays till 4 a.m.)
Lower Greenville’s favorite late-night pizza joint now has two locations for diners to grab a pie and an abundance of the spot’s patented Pizza Crack seasoning. But only the original location has super late hours for the neighborhood’s most-dedicated pizza lovers, even officially advertising that they deliver “late af” on their website.

A post shared by The Halal Guys DFW | Catering (@thehalalguysdallas)

Halal Guys
Multiple Locations (11 a.m. to 2 a.m. on Fridays and Saturdays)
Thanks to locations throughout the city, halal food lovers can get their fix until late on weekend nights. And while gyros and chicken and rice bowls aren’t hard to come by necessarily, this brand’s proprietary white and red sauces provide unique flavors to the dishes that are worth seeking out.

Harlowe MXM
Deep Ellum (11 a.m. to 2 a.m.)
People looking for a bit of atmosphere with their meal after a night out can check out this restaurant’s locally-focused gastropub offerings. Here you can find a seafood-heavy menu complete with a variety fresh oyster preparations, as well as a burger that you can order “Harlowe style” (read: add a lobster tail) for an extra $12.

Mama Tried
Deep Ellum (Open till 2 a.m. on Tuesdays through Sundays)
In addition to being one of the newest and biggest honky-tonks in the area, the Mama Tried kitchen serves up southern staples until late on the daily. Whether it’s plates of chicken-fried steak or chili-rubbed turkey legs or substantial snacks like the popcorn flight or the mile-high nachos, the menu is designed to provide hearty fuel for two-steppin’ and late nights out on the town.

Moxie’s Grill & Bar
Uptown (11 a.m. to 2 a.m.)
If you find yourself with a group of friends and an empty stomach in Uptown, the shareable plates and diverse menu at Moxie’s has a bit of something for everyone. Moxie’s is also perfect for those with dietary restrictions, as the menu is broken down into sections for those with allergies and gluten aversions.

No. 1 Plus Chicken
Northwest Dallas (5 p.m. to 2 a.m. Friday and Saturday)
Savor a variety of Korean fried chicken dishes, served by the half and whole bird or as chicken wings. No. 1 also features a variety of banchans (read: small side dishes) and Korean bar food favorites at an affordable price point, plus plenty of shareable options. Don’t forget to complete the experience with plenty of beer and soju.

OMG Tacos
Multiple locations (11 a.m. to 3 a.m.)
With multiple locations throughout the Metroplex (and and more coming), OMG has a stronghold on the late-night food game. Its menu is aimed to satisfy both Mexican and junk food cravings, with items such as taco-loaded fries and Hot Cheetos-topped elotes that are available until that wee hours of the morning.

Ruins
Deep Ellum (11 a.m. to 2 a.m.)
This still-new-ish concept from the team behind Armoury D.E. does to tacos and Mexican food on Commerce Street what its sister spot over on Elm Street does to burgers. It’s also a masterclass in convenience: After checking out a show in its dedicated performance space next door, just bounce on over to the dining room to enjoy some respectfully crafted traditional south-of-the-border fare that’s just as tasty at lunchtime as it is right before last call.

Serious Pizza
Deep Ellum (11:30 a.m. to 3 a.m. on Fridays and Saturdays)
Not only is Serious the home of one of the city’s largest pizzas, but it’s the perfect place to grab a customized slice during a late-night out. No, the long lines at this Deep Ellum hot spot aren’t exactly suited for those looking for a quick bite (weekend wait times can average around 45 minutes) but at least that time will allow you to sober up as you decide on the perfect topping combination.

Zalat
Multiple locations. (11 a.m. to 2 a.m., with hours extended to 4 a.m. at its Fitzhugh Avenue location)
Zalat’s multiple locations throughout the Metroplex offer pies until late, but only the original Fitzhugh location caters to true night owls with its hours until 4 a.m. daily. Still, its menu was created with the munchies in mind, with items like the Pineapple Express pie, a s’mores pizza that can be topped with bacon and other 420-friendly specials.