The Pie of The Beholder. 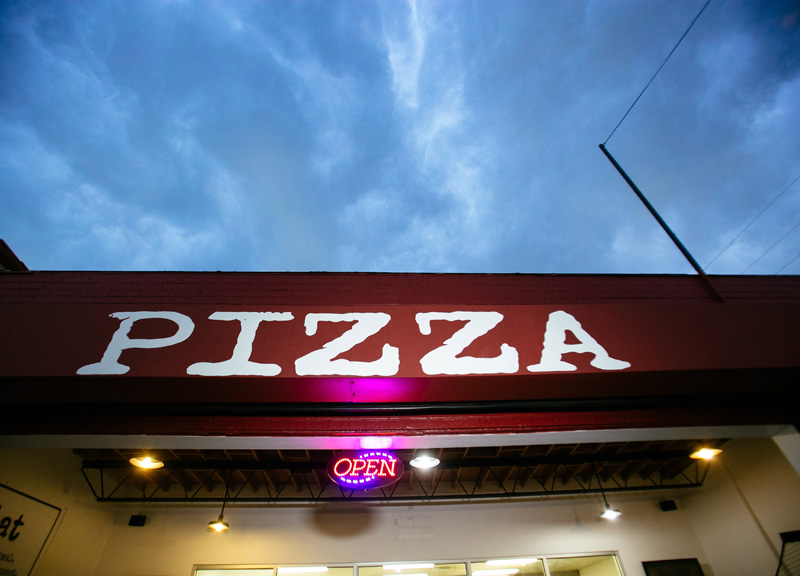 ZaLat Just Wanted To Craft The Perfect Drunk Food. What It Got Was One Of Dallas’ Best Pizzas.

Over the course of the past few years, Dallas-Fort Worth cuisine has almost completely shifted its identity. What was once a stuffy scene heavily dominated by steak dinners now readily welcomes the weirder wiles of the food world — be it a single experimental dish or an entire menus centered around an imaginative concept.

Sometimes, though, it’s the simplest deviations from the norm that make the biggest splash. These more minor shifts present a sort of an endearing taboo that simultaneously draws you in with the promises of something different while repelling you by testing time-honored formulas.

Khanh Nguyen, one of Dallas’ more creative culinary minds, gets all this. Not bad considering that, while his name currently generates a pretty decent buzz in area foodie circles these days, he’s not a professionally-trained chef at all. In actuality, he’s a lawyer. Nonetheless, his love of food inspired him to open the late-night pho haunt DaLat and, more recently, the nearby pizza offshoot ZaLat.

In turn, he’s only helped light a fire under the North Texas foodie world is all.

That’s kind of old news at this point, of course. Since 2012, Nguyen has been serving eyebrow-raising versions of the Vietnamese food from his childhood at his acclaimed DaLat spot.

But pizza, he says, has always been his true spirit animal. And ZaLat has become more than just his chance to interact with that spirit animal face to face; it’s also become an instant hit — even if Nguyen will acknowledge that “instant” looks a lot different on the outside than from the in.

“[Owning a pizza shop] was not really that well-thought out of a thing,” Nguyen admits with a laugh. “We’d been looking at the [former] pizza place for the last year while they were operating, and I thought to myself, ‘If I ever get the chance one day, I would love to see if I could make some good pizzas.'”

At first blush, one might imagine the jump from Vietnamese cuisine to pizza to be an overwhelming one. Alas, that hasn’t stopped Nguyen. Nor has it calmed the influx of ticket orders his joint’s been receiving since opening earlier this spring.

There’s a reason for the crowds: Not only does ZaLat serve 14- and 18-inch, New York-style pies in your more standard forms — pepperoni, cheese, margherita, etc. — until 4 in the morning, but it’s also offering up some truly imaginative options, too. It’s tough not to be at least curious when confronting a menu featuring such Thai coconut chicken and Reuben pies. (The same’s true of the fact that his company will even sell its pies over text message.)

It also helps that the pizza’s actually good, not just weird.

That took some trying, though. But that was kind of the point. Since Nguyen was starting from scratch, he and his team were able to begin their diligent recipe-crafting process with a blank slate. And so they focused on specific objectives: The foldability of the crust, the greasiness of the pepperoni and the ability to withstand reheating are just a few of the factors Nguyen says he and his crew considered in that process. Hell, they even taught themselves to hand-toss pizza dough during this trial-and-error period.

Such is how Nguyen just prefers things at his spots: “If you’ve been to DaLat, and you’ve seen my menu there — I’m just a naturally high-level, ADHD person,” Nguyen says. “So I just come up with weird shit all the time. Sometimes I have a very specific flavor I’m going after, so I build it. Or one of my guys will come up [with an] idea about something, and I’ll say yea or nay.”

Another thing given a thumbs up or down in the researching process for ZaLat? Other pizzas from around town.

While building his own menu, Nguyen and his team continuously ordered pies from their future competitors as a means to push them along in their own “holistic journey.”

“I still remember one of the pizza guys [who came here],” Nguyen says. “He walked up, and saw that there was a mound of pizza boxes that we had gone through and eaten. He looked at us and goes, ‘Are you fucking with us?’ He’d never delivered to another pizza place before.”

(If only all sciences included pizza as a variable.)

“What I’m hoping for right then [when I’m out late], I don’t usually get,” Nguyen says. “But the taste that I’m looking for is what I wanted to serve. And it’s basically: You gotta have enough drinks; it’s gotta be super savory and salty, from the cheese to the pepperoni; the crust has gotta be crispy, but not cracker thin; and it’s gotta be bendable to eat at a street corner.”

His combined knowledge in this regard is perhaps best-represented through his most perplexing offering, which marries his two kitchen directives into the form of a pho pizza that’s served complete with noodles. This particular pie is one of a few featured on a pseudo-secret menu at ZaLat. Other toppings that can be ordered but aren’t on the main menu include such items as al pastor and elotes. There are also more stoner-friendly concoctions, including a pasta ring pie (originally marketed as the Spaghetti-O pizza until objections from Campbell’s caused them to switch names and vendors) that was served on 4/20.

And though the allure of these secret menu items has proved a popular focal point in ZaLat’s earliest days, it’s not necessarily the entirety of the shop’s identity.

It isn’t that — and not in the minds of some of Dallas’ culinary thought-leaders, either. Noted area celebrity chef John Tesar (Knife, Oak), for instance, is already a big fan of Zalat’s more-standard varieties, calling its offerings the “best NY style pizza ever in Dallas!”

Perhaps the days of Dallas foodie elitism are dying. And perhaps ZaLat’s proof of it.

Nguyen, for his part, is happy to play this role — by just doing things his way.

“Not coming from the industry, I don’t have any preconceived notions about how to do anything,” he says. “It’s just the way I am, very merit-based and also just straight-up on the food.” 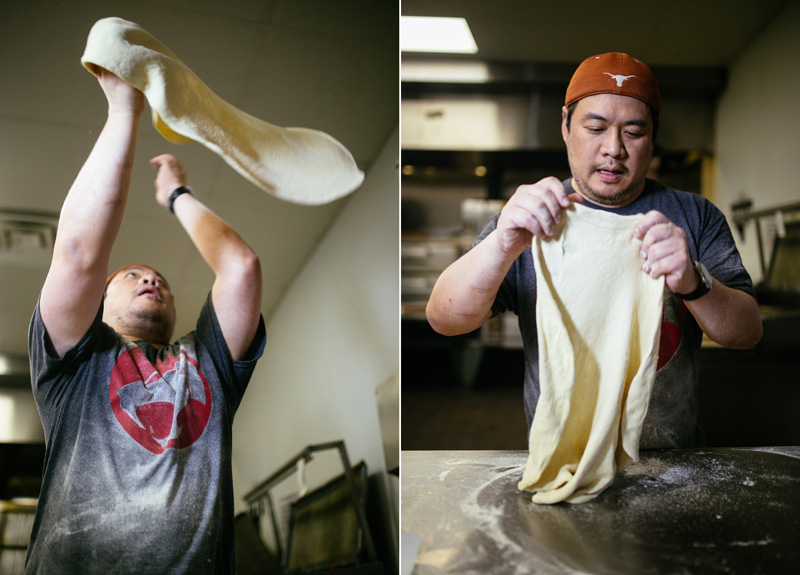 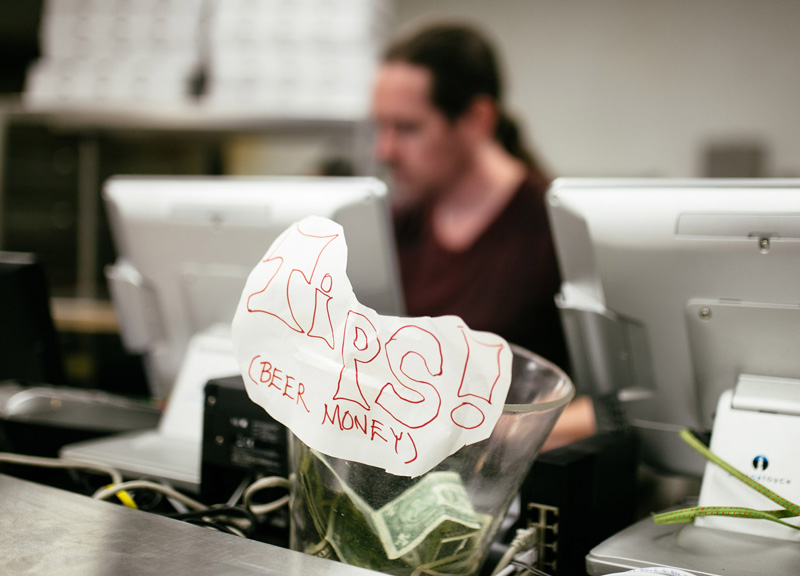 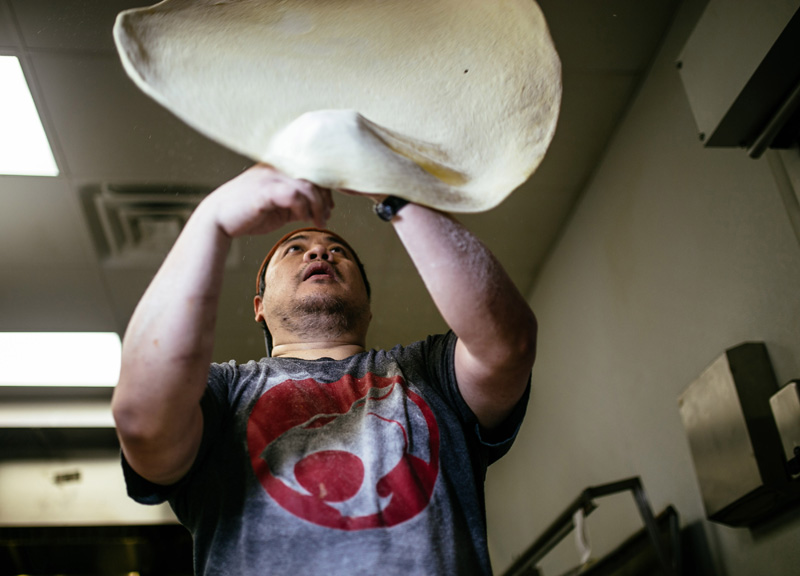 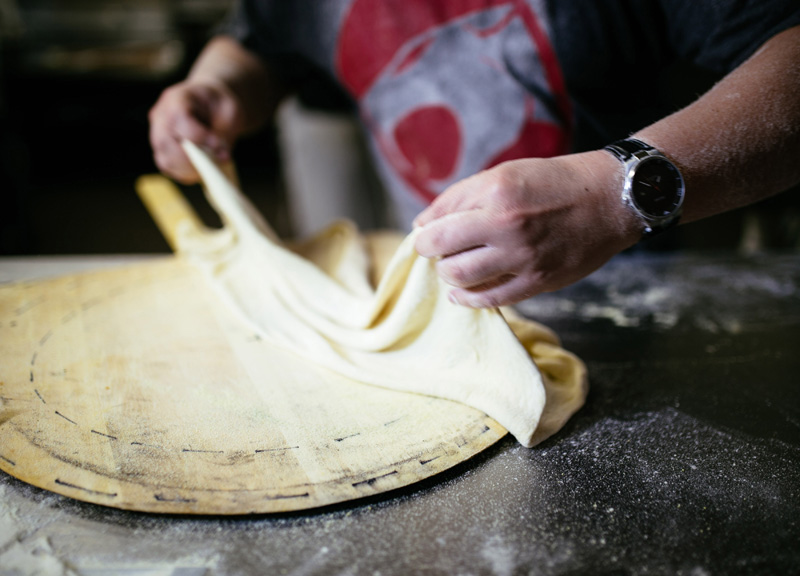 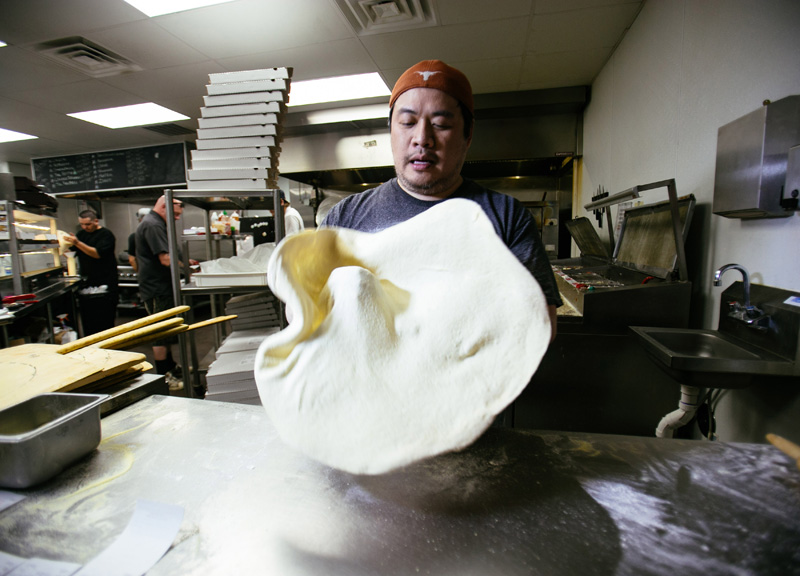 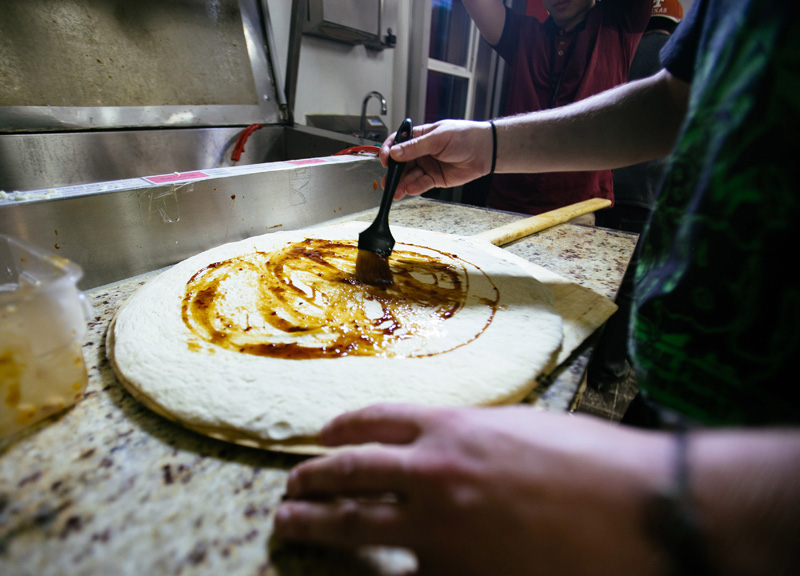 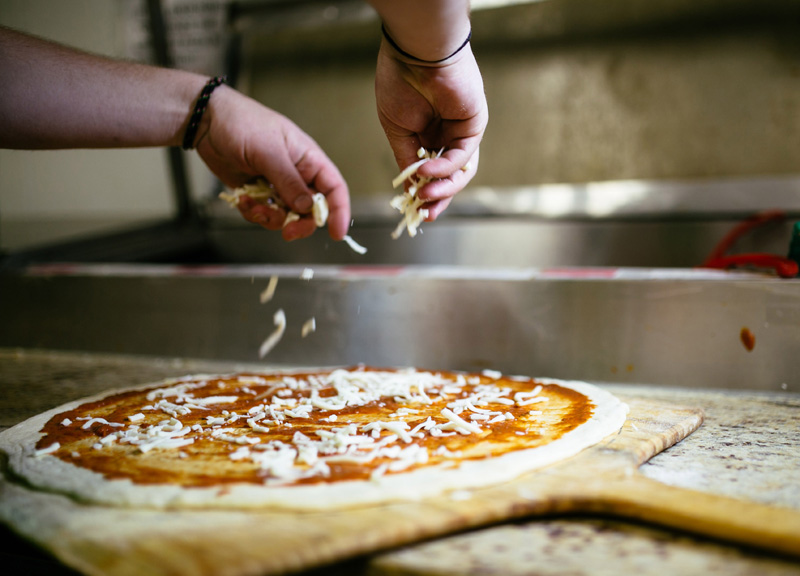 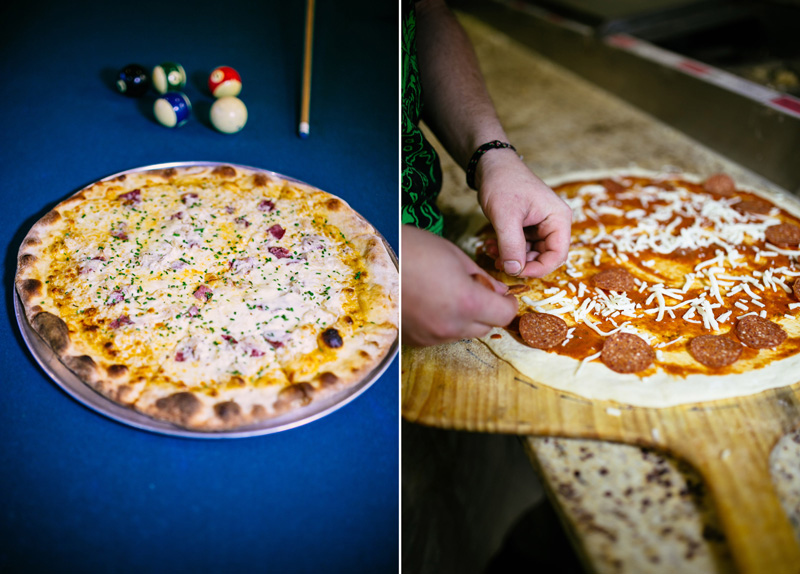 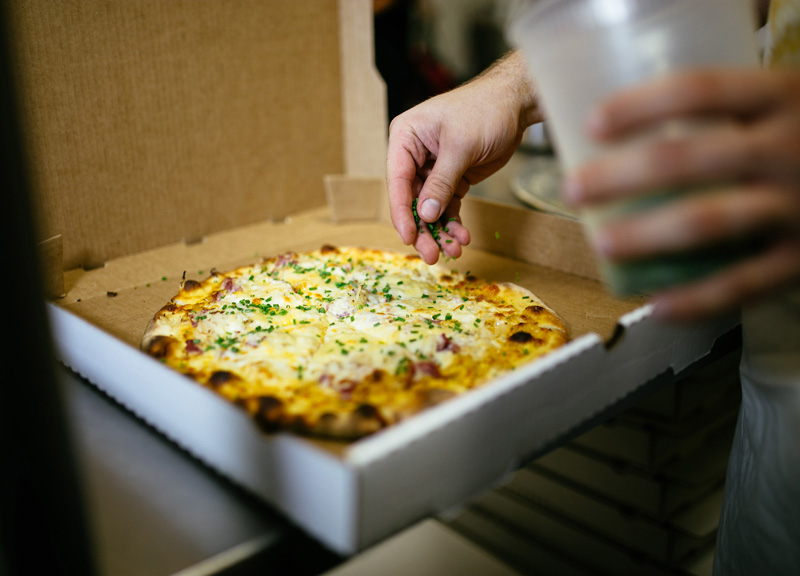 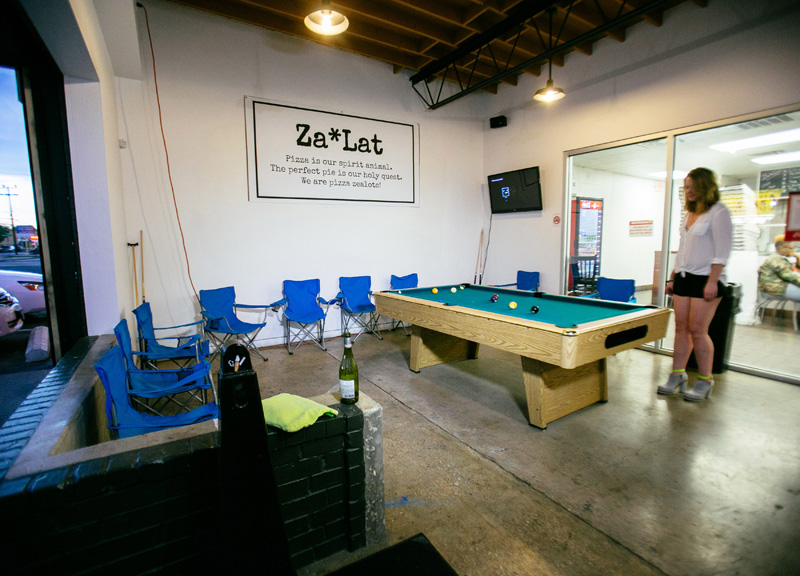