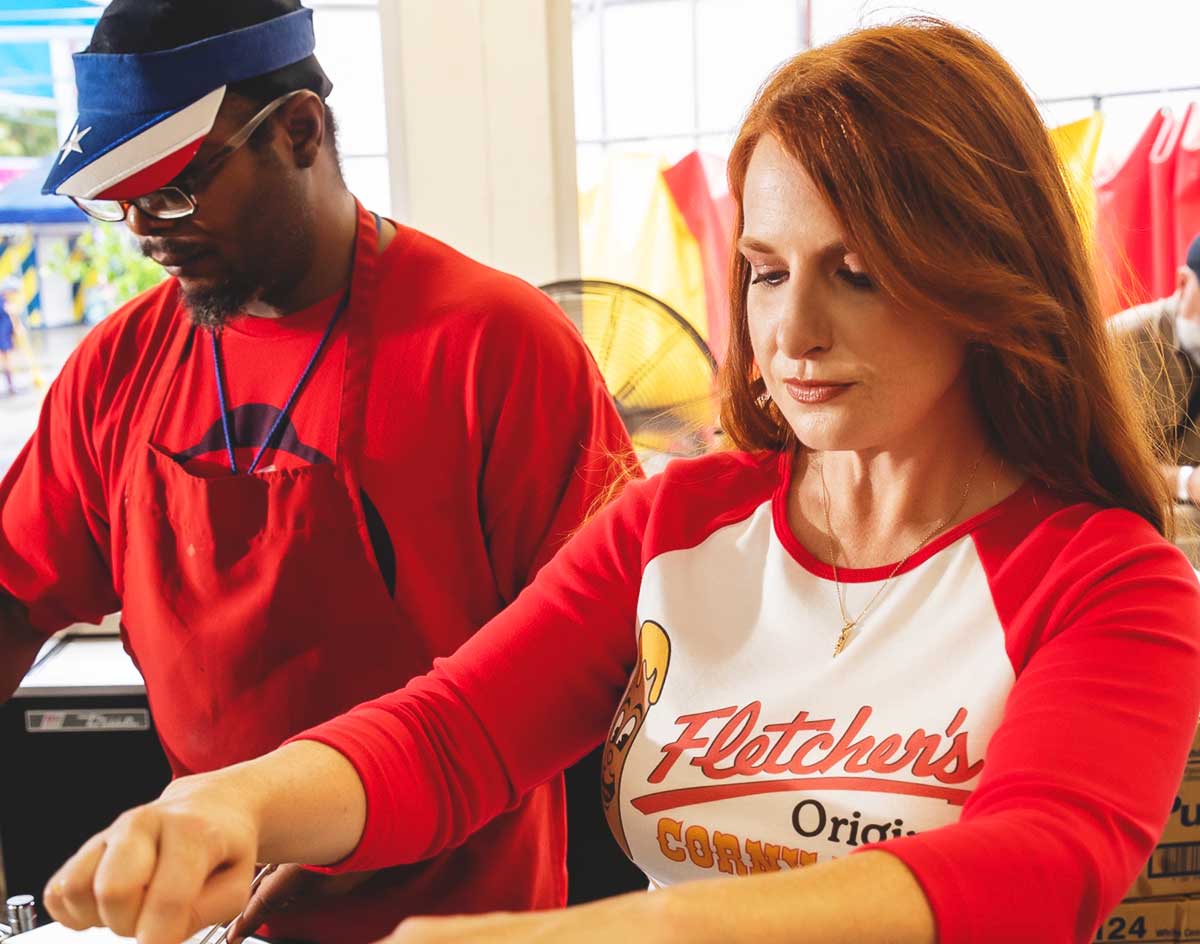 If Amber Fletcher has her way, all this public drama that her famous Dallas family has endured of late is finally reaching its end.

Last week, a judge ruled in favor of her family’s business — the storied Fletcher’s Original Corny Dog brand, which claims to have invented corn dogs and to sell some 630,000 of the deep-fried treats each year at the State Fair of Texas — as well as its claims that a new corn dog venture in Dallas was infringing on its brand, trying to confuse the public into believing that their entities were one in the same.

Complicating matters: The operator of this new business, Jace Fletcher Christensen, just so happens to be Amber’s niece.

It’s been a busy January for all branches of the Fletcher family tree. A few weeks ago, in response to the ruling, Jace finally opened her long-in-the-works fair food storefront — just not under the “Fletch” banner she’d previously planned on using. Instead, as a flood of press about her new spot revealed, she’d was moving forward (for the time being anyway) under a new “Corndog With No Name” moniker. More accurately, she was forced to change the name, as the court agreed with the Fletcher’s brand argument that Jace’s “Fletch” name was chosen specifically as a means of using her family’s brand to prop up her own competing efforts. Backing up this claim, the lawsuit further alleges that Jace’s mother Vickie resigned from Fletcher’s in December 2018 but used her Fletcher’s company email address to tell vendors even as recently as March 2019 about Fletch, causing further confusion.

Though pleased with the preliminary injunction that’s now in place, Fletcher’s heir apparent Amber says she wishes this spat hadn’t come to a lawsuit in the first place. She says her family reached out to Jace in hopes of avoiding a legal dispute, looking to settle matters privately by offering licensing agreements and even monetary support to offset any re-branding costs Jace might incur.

“But we were just rebuffed every time,” says Amber, who currently serves as Fletcher’s head of marketing and event operations. “She just wasn’t willing to work with us. So finally we had to get [a temporary restraining order] — because she [initially] wanted to open the restaurant the day the state fair opened, and we felt the consumer confusion would be out of control. We would love for [Jace’s] company to be successful and build a brand of their own. We want them to have customers that love them, and that want to be a part of what they’re building. We just don’t want people who love the genuine Fletcher’s corny dog to be confused. We don’t want unfair competition. I wish that Jace would have come to us and said, ‘Look, I have this idea. Do you want to be involved? Do I have your permission?'”

Amber balks, however, when asked if such a conversation would’ve definitively altered their disagreement.

“I can’t speculate,” she says. “I have no idea. Jace is gonna do what she wants to do.”

It’s probably worth noting that the two aren’t exactly planning any family reunions together. Amber says they’re not even on speaking terms these days.

“Jace has not spoken to me in several years,” Amber says. “Quite frankly, I don’t feel welcomed — and I don’t appreciate that she has targeted my mother. It’s not her; it’s a corporation. She’s targeted my mother, who has always come to her defense.”

The “targeting” Amber speaks of is likely a reference to The Nutty Nana, a funnel cake served at Jace’s restaurant whose name pokes fun at the family dispute. (For what it’s worth, in our own previous reporting on this back-and-forth, Fletcher Christensen has indeed mentioned that her step-grandmother did always come to her defense, and that they always got along — until the injunction papers arrived.)

Still, Amber says she regrets how this squabble has played out so publicly.

“It shouldn’t be a family feud; it’s a trademark issue,” she says. “And it’s caused a kind of divided public. But we’re not saying, ‘Don’t eat there!’ We’re just saying, ‘It’s not Fletcher’s.’ [But I’m] not so pleased with the smear campaign that’s happening with the Fletcher’s name, and [Jace referring to Fletcher’s as] the ‘F’-word. That’s not respectful to the Fletcher’s brand.”

Exacerbating the issue, Amber says, is the separate fact that Fletcher’s has been working toward a number of changes of its own throughout this ordeal. These efforts include the hiring of publicists (a first in the brand’s 80-plus-year history), the purchase of two food trucks that will allow Fletcher’s to better serve corny dogs at events beyond the confines of the State Fair of Texas and even plans to open a Dallas-area brick-and-mortar store of its own in the near future — something that, perhaps, could grow into a nationwide concept in time.

The aim with these moves, Amber says, is to update the brand’s operations for the times, but without sacrificing the legacy and nostalgia attached to the Fletcher’s name.

“We’re not modern,” Amber says. “We’re classic, and we’re corny, and we’re sticking to it.”

To that end, Amber says any brick-and-mortar location from Fletcher’s would look quite different from Jace’s chic and sleek operation.

“We’d sell corny dogs and funnel cakes,” says Amber, who adds that she’s been making funnel cakes since she was a kid. “But it would be like a kiosk — something small.”

In the meantime, and in the wake of this kmost recent ruling, Amber says she genuinely hopes that Jace’s company — she suggests “Jace’s Place” as a possible name — is a success.

“We’ve seen pictures [of Jace’s storefront], and we all think it’s just adorable,” Amber says. “I love the carousel [she’s installed], and I think it’s just great. We just want to move forward. I would like to hope that, at some point, we can all reconcile.”