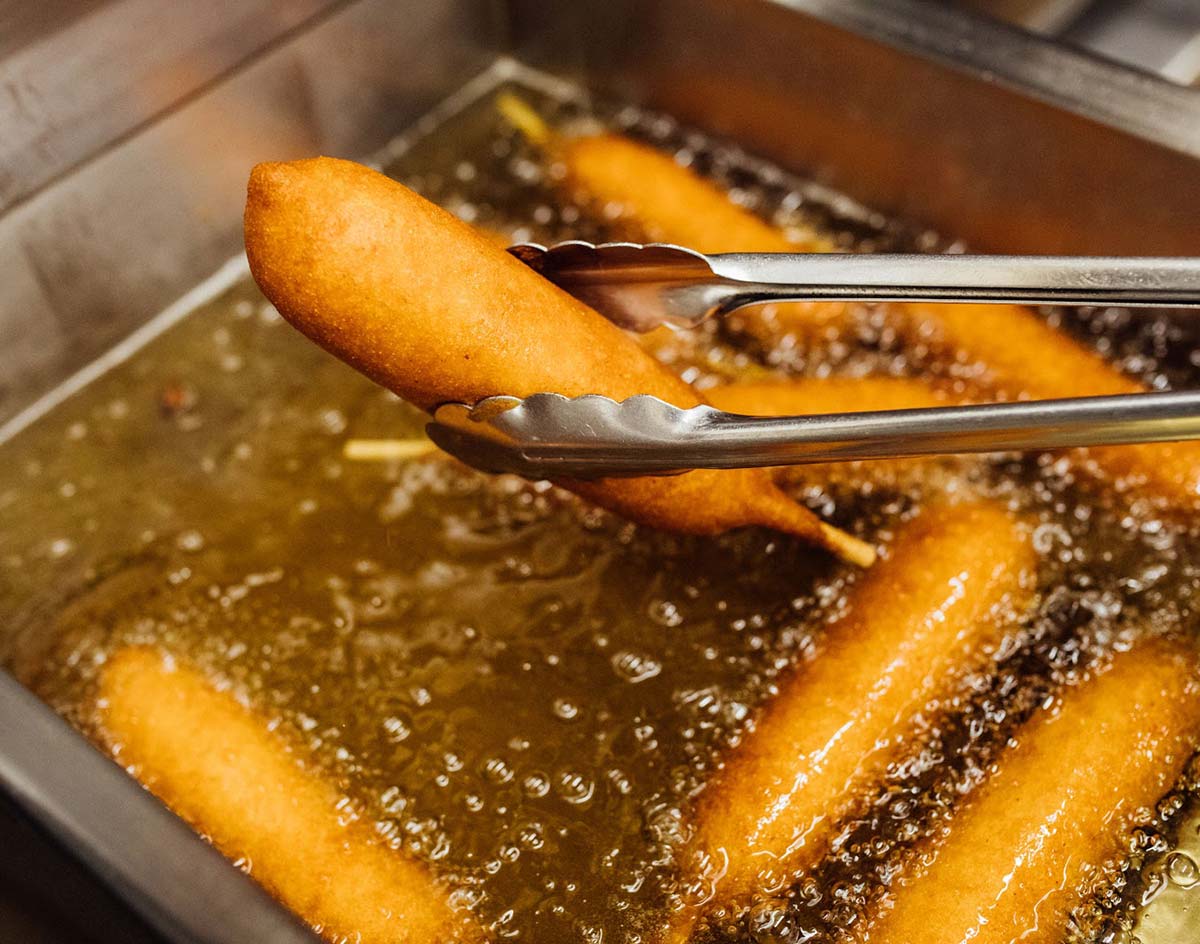 Two Fletcher’s Corny Dog Heirs Launch A New Brand To Bring Their Own Take On The Family’s Legacy To Crowds Beyond State Fair Attendees. So Where’s The Beef?

On Friday, February 15, members of the Dallas food media were introduced to Fletch, a new company billing itself as “purveyors of fine stick food.” And these folks really should know all about such things — they are fine stick food royalty, after all.

Fletch is run by the granddaughters of the man who introduced the corny dog to Texas, Neil Fletcher. They are the heirs to throne he built out little wooden sticks.

Looking at the situation from a bird’s-eye view, the idea is pretty clear-cut: Two members of the Fletcher family decided to create their own version of their family’s corn dog business — one that, for all intents and purposes, is unrelated to the original corny dogs sold at the State Fair of Texas.

Fletch’s versions are made with different (although admittedly similar) recipes, and they come from a crew that has more than 30 combined years in the fried food biz.

The trick lies in the fact that Fletch has nothing to do with the State Fair of Texas — because, unlike their family’s offerings, these wares will be sold everywhere but within the confines of the fair. 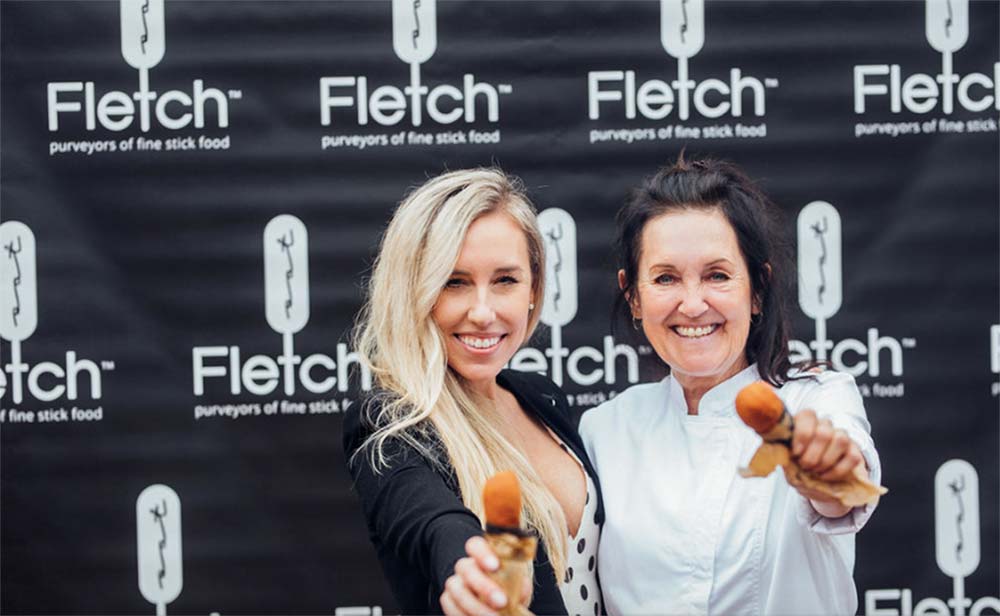 Everyone’s pretty excited about it, too. Fletch has already secured partnerships, catering gigs or pop-ups with NASCAR, AT&T Stadium, University of Texas football games, the Houston Rodeo and Dos Equis Pavillion, plus they’ve assembled an emergency meal response team for when disaster strikes and people need to be fed within driving distance. There’s also a food truck in the works.

Now that the glitz and blitz of the company’s announcement has started to wear off, though, it’s becoming increasingly clear that maybe Fletch isn’t so much the direct Fletcher’s-approved offshoot it was initially presented as being.

As that news spread, something of a social media shitstorm naturally ensued.

Now, if you’re a true Texan, you’ll know that the corny dog was invented right here in 1942 and has become a staple at the State Fair of Texas ever since. But it’s not time for the State Fair so how do I have this in my hand, right? WELL, I’m here to bless your feed by letting you know that ol’ Fletch’s grand-daughter and great-granddaughter have joined forces to create @EatFletch and while Fletch isn’t affiliated with the actual Fletcher’s, they serve up a mean corn dog! Pitched as a pop-up restaurant, special events and catering company they specialize in, you guessed it! With Fletch, you’ll be able to enjoy the traditional corn dog that you know and love but with several more options including all-natural, grass fed beef dogs, jalapeño cheddar dogs, turkey dogs and even veggie dogs! Oh. Did I mention funnel cakes with more toppings that you could dream of? Be sure to follow @EatFletch and check their page periodically to find out where they’ll be popping up next! 🌭

Reached by phone, G.G. Fletcher, the widow of the late Neil Fletcher and the grandmother to Fletch’s Jace Fletcher Christensen, says the differences between Fletcher’s and Fletch are mostly minute.

“There’s only two letters’ difference!” she notes at one point while pointing out that most eaters wouldn’t be able to tell the differences between the two.

While there has been no talk of a lawsuit, G.G. Fletcher says the family’s main desire at this point is to avoid “confusion” between the two brands. She also says, while she was unaware of the fact that Jace had created the Fletch brand until just last week when a reporter called her for comment on it, she’s worried about the way the family’s concerns are being perceived on social media.

Per G.G., that’s mostly the doing of Amber Fletcher, a daughter of the late Neil Fletcher’s fifth wife and one of the legal airs of the Fletcher’s corny dog business, whose posturings were made in an effort to protect the family name.

“[I wanted] to protect my grandmother,” the Fletch co-founder says when reached by phone this week. “That’s why I came out so strongly [saying] that we’re different — because I knew I she didn’t want any confusion with what they do at the [State Fair of Texas]. I was so careful with my words, marketing and delivery. We’re branching off, forming our own company.”

In order to do that, the products, names and distribution methods would all have to be different from Fletcher’s procedures. And that’s what Christensen and her mother Vickie “Vic” Fletcher say their company is, from the ingredients that go into Fletch’s corn dogs, which, unlike the Fletcher’s versions, feature unbleached flour and grass-fed beef. Christensen also points to the original Fletch sauce and the fact that she and her mother are working on a gluten-free batter as more proof of the company’s differences. While pointing out that there’s nothing wrong with the original brand, her version is simply healthier and more modern.

Limited Edition: Fletch Corn Dog Facial Kit for your swag bags at our media event tmrw! So it started out as a joke, but… we need to talk about this 🤔 #eatfletch #fletch #finestickfood #corndog

Seems, for the time being anyway, the two companies are going to figure out ways to co-exist.

“My grandmother and I spoke,” Christiensen says, “and we are trying to be supportive of each other. I have her blessing”