Coming Attractions: A Wrinkle In Time, Isle Of Dogs & More. 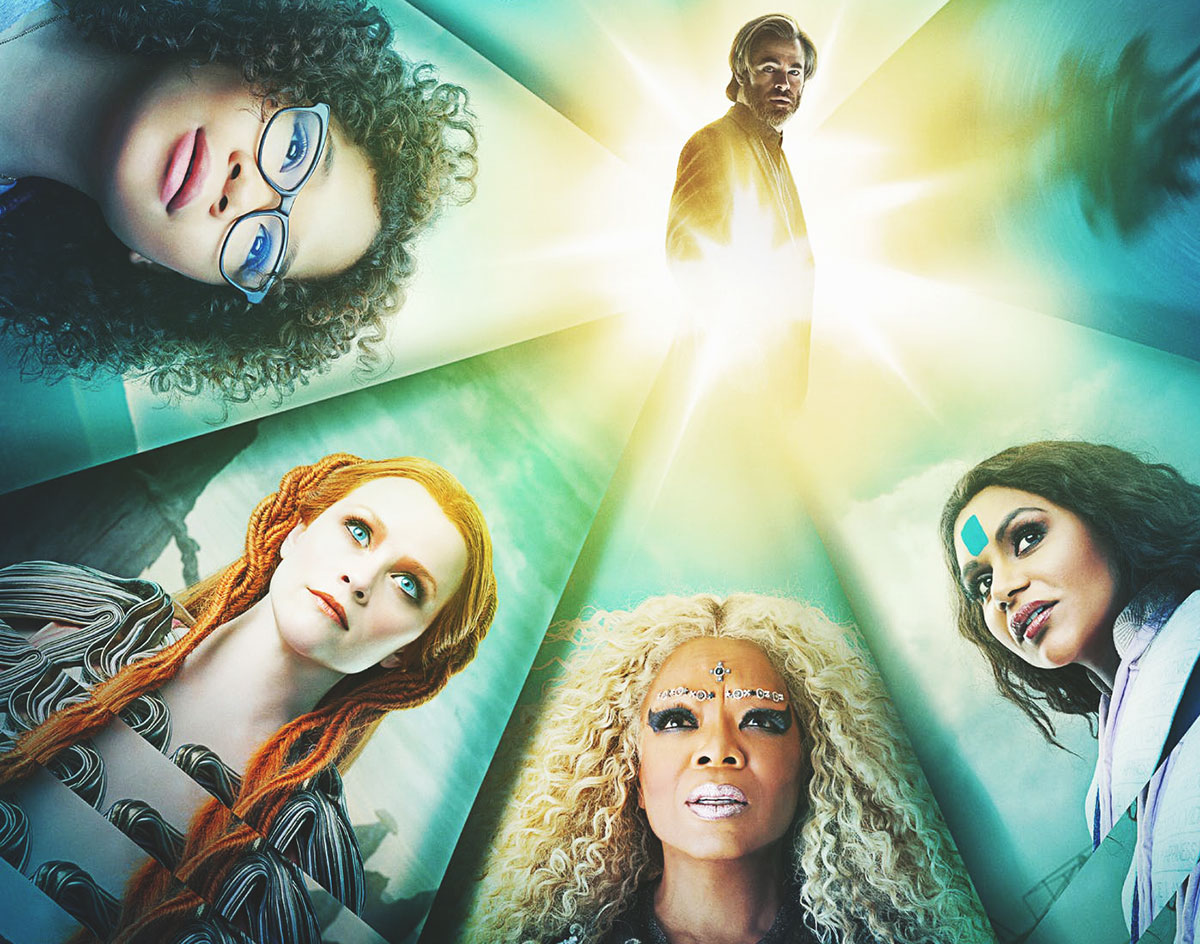 On A Wrinkle In Time, Isle Of Dogs, Ready Player One, And The Rest Of March’s New Releases, Limited Showings and Repertory Screenings Around Dallas.

After an endless January and a quick February, March is ready to kick down the doors and unofficially start the summer movie season.

Don’t believe me? Well, you should, since two of the biggest movies of the year — OK, of the ones without superheroes, granted — are opening this month. Meanwhile, the arthouse theaters are going big on some intriguing dark comedies over these next few weeks as our favorite local theaters are paying tribute to cinema’s most notorious outsiders.

It’s looking like it’s going to be a pretty solid month at the movies, folks.

Red Sparrow.
Director: Francis Lawrence.
Writer: Justin Haythe.
Cast: Jennifer Lawrence, Joel Edgerton, Charlotte Rampling, Jeremy Irons.
Opens: Friday, March 2.
Whether this ends up being Tinker Tailor Soldier Spy with more sex or a deadly serious Atomic Blonde, I am all the way in on Jennifer Lawrence playing a Russian secret agent with the great-in-everything Joel Edgerton as the CIA operative trying to turn her. And you’ve got Charlotte Rampling and Jeremy Irons playing mysterious evil handlers too? That’s just icing on the cake.

A Wrinkle in Time.
Director: Ava DuVernay.
Writer: Jennifer Lee.
Cast: Storm Reid, Gugu Mbatha-Raw, Chris Pine, Zach Galifianakis.
Opens: Friday, March 9.
Ava DuVernay (Selma) gets called up to the blockbuster leagues with Disney’s adaptation of Madeline L’Engle’s classic sci-fi novel. While the bones of the story – a young girl goes on a journey to another world to find her father – aren’t the most original, DuVernay has shown her spectacular vision with the film’s use of color and its excellent (if unexpected) casting.

Unsane.
Director: Steven Soderbergh.
Writers: Jonathan Bernstein, James Greer.
Cast: Claire Foy, Juno Temple, Jay Pharaoh, Amy Irving.
Opens: Friday, March 23.
At this point, Oscar-winning director Steven Soderbergh has earned a lifetime pass from me. Since he pulled a Michael Jordan-esque retirement in 2013, he made two seasons of a TV show, served as cinematographer on Magic Mike XXL and officially un-retired with last year’s super-fun Logan Lucky. Now, he’s going back into experimental mode with Unsane, a low-budget thriller shot on an iPhone. Claire Foy (The Crown) plays a woman who voluntarily(?) commits herself to a psychiatric facility, then becomes convinced that her stalker is one of the orderlies. Is she in harm’s way or is she losing her mind?

Ready Player One.
Director: Steven Spielberg.
Writers: Zak Penn, Ernest Cline.
Cast: Tye Sheridan, Olivia Cooke, Ben Mendelsohn, Mark Rylance.
Opens: Friday, March 30.
I have fond memories of reading Ernest Cline’s best-seller, sure. But when people share screenshots of passages on social media, I find myself cringing. In the hands of Steven Spielberg, the source material should only improve. Tye Sheridan plays Wade Watts, an orphan living in 2045, who competes against millions of other players to find a key that will entitle its keeper to the fortune of billionaire James Halliday (Mark Rylance). There’s plenty of potential for Hollywood to get it all wrong, turning the thing into a mish-mash of CGI and ’80s references. But while even Spielberg can turn in some duds (The BFG, anyone?), I wouldn’t trust anyone else to translate the Cline’s adequate writing into something truly awe-inspiring.

The Death of Stalin.
Director: Armando Iannucci.
Writers: Armando Iannucci, David Schneider, Ian Martin.
Cast: Jason Isaacs, Steve Buscemi, Rupert Friend, Andrea Riseborough.
Armando Iannucci is one of the sharpest writers ever to work in TV and film. His work on British classics like The Thick of It are legendary, as are his collaborations with Steve Coogan. On top of that, the man also created Veep,  and wrote and directed the howlingly funny In the Loop. His latest is a total farce about the power vacuum created by the death of Joseph Stalin and the race to name his successor as leader of the Soviet Union. None of the actors speak Russian here — none even even an accent — but that’s just fine, since they’re going for laughs and not for historical accuracy.

Isle of Dogs.
Director: Wes Anderson.
Writer: Wes Anderson.
Cast: Bryan Cranston, Koyu Rankin, Bill Murray, Greta Gerwig.
Call me basic if you want, but a stop-motion Wes Anderson movie about lovable doggos is extremely my shit. I love all of Anderson’s films, but especially his gorgeous adaptation of Roald Dahl’s Fantastic Mr. Fox. It might be slightly controversial, but this is going to be adorable and poignant, so I’ll take it.

Flower.
Director: Max Winkler.
Writers: Max Winkler, Alex McAulay, Matt Spicer.
Cast: Zoey Deutch, Kathryn Hahn, Tim Heidecker, Adam Scott.
It’s going to be tough to pull off, but Flower seems like the kind of movie that sees where the line is, then gleefully skips over it. Zoey Deutch (an actress with a ton of potential who hasn’t had a truly great role yet) plays Erica, a high schooler who teams up with her friends and soon-to-be stepbrother to seduce, entrap and destroy an accused child molester (Adam Scott). By the way, this is a comedy, if the presence of late-comedy icons Kathryn Hahn and Tim Heidecker didn’t clue you in. Unsurprisingly, its Day-Glo look comes from co-writer Matt Spicer, who wrote and directed last year’s arsenic cocktail that was Ingrid Goes West.

Thoroughbreds.
Director: Cory Finley.
Writer: Cory Finley.
Cast: Anya Taylor-Joy, Olivia Cooke, Paul Sparks, Anton Yelchin.
This pitch-black comedy set in the Hamptons features two of the best young actresses of the day as friends who plot to kill one’s stepfather (the terrific Paul Sparks) with the help of a drug dealer (Anton Yelchin, in his final film performance). While the big pull-quote is “American Psycho meets Heathers,” I’m getting a distinctly Wild Things vibe, so you’re mileage may vary on that combo.

Brazil.
Director: Terry Gilliam.
Writers: Terry Gilliam, Tom Stoppard, Charles McKeown.
Cast: Jonathan Pryce, Robert De Niro, Ian Holm, Kim Griest.
Playing At: Inwood Theatre.
Showing: Friday, March 9; Saturday, March 10.
Terry Gilliam’s best movie — about a low-level worker caught in a huge international conspiracy — had a troubled history, with long battles over Gilliam’s preferred cut not seeing the light of day for many years. This midnight showing is that original European release, bleak ending and all. But, hey, there are still plenty of laughs throughout. Sadly, much of it still rings true in an age of creeping authoritarianism.

Paris, Texas.
Director: Wim Wenders.
Writers: L.M. Kit Carson, Sam Shepard.
Cast: Harry Dean Stanton, Nastassja Kinski, Dean Stockwell, Hunter Carson.
Playing At: The Magnolia.
Showing: Tuesday, March 20.
Harry Dean Stanton sadly passed away last year. One of his only leading roles was this landmark ’80s indie about a drifter trying to re-connect with his family. It’s slow, to be sure, but it’s got lots of powerful acting and remains one of an increasingly rare number of films actually shot in our great state.

Everything Is Terrible! Presents: The Great Satan.
Playing At: Texas Theatre.
Showing: Tuesday, March 20.
Everything Is Terrible! has long been one of the best destinations for random, hilarious, out-of-context videos. Their all-puppy compilation film DoggieWoggiez! PoochieWoochiez! was a lot of fun, even if it made no sense. This one’s likely to be even more insane, as it features the best, worst and weirdest depictions of Lucifer himself, mostly from truly bizarre Christian videos. So, yeah, I’ve probably seen at least 40 percent of these clips at some point in my life.