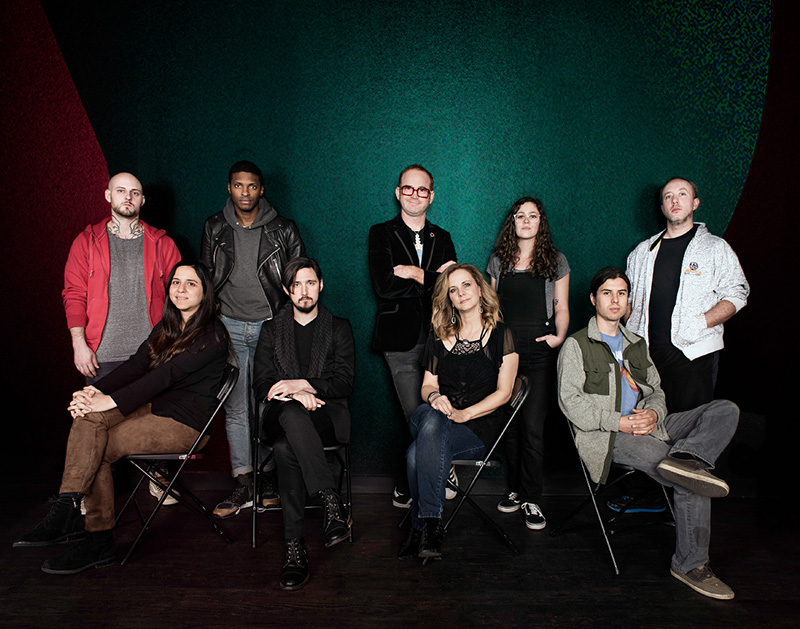 This story is sponsored by Array, a one-night-only event on Saturday, May 12, at Deep Ellum venues The Bomb Factory and Canton Hall as part of the 2018 SOLUNA Festival. Tickets to the music portion of this unique presentation at The Bomb Factory can be purchased here. The visual art portion at Canton Hall is free to attend.

The SOLUNA International Music & Arts Festival’s new multidisciplinary arts celebration known as Array is already (literally) making all kinds of noise by bringing such high-profile music industry names as Nas, Big Gigantic, Kaleo and Jacob Banks to Deep Ellum for one-night-only concert pairings with Dallas talents of all stripes on Friday, May 12. But, attention-worthy as that much-anticipated offering at The Bomb Factory may be, a second just-as-impressive Array spectacle is set to delight all of the senses just next door — and it could end up stealing the whole show.

This portion of the experience will find six new media art installations set up within the November-opened Canton Hall to go with an additional two pieces that will be erected inside of The Bomb Factory.

While the event at The Bomb Factory will be ticketed, the Canton Hall showcase will be open to all comers. Just like its next-door offering, though, the Canton Hall presentation will place a heavy emphasis on the talents of Dallas creatives — and, specifically, on those whose works align with Dallas Symphony Association Board of Governors Chairman and Capital One Financial Services President Sanjiv Yajnik’s goal of fusing art with STEM as part of Array.

To accomplish that, Array asked the Dallas-based performance artist Erica Felicella to curate its visual art installations. Once charged with that task, Felicella then solicited Dallas artists Sheryl Anaya, Mattheiu Brooks, Alejandra Camargo, Jordan Castilleja, Jeremy McKane, Carmen Menza, Darcy Neal, James Talambas, Tramaine Townsend and Eric Trich to fill out a showcase that she hopes can inspire and be appreciated by all.

“Art tends to have an intimidating factor,” Felicella says. “You hear people all the time saying, ‘Art isn’t for me’ or ‘Oh, that’s for those who are already in that world.’ But the new media pieces we’re focusing on at this event is more comforting and a bit easier to digest. These pieces are all very approachable, while at the same time incredibly innovative and smart.”

Pressed for specifics, she mentions three Array pieces that speak to this aim: Tramaine Townsend’s “ACCLAIM,” a 360-degree virtual reality experience that comments on the experience of being on social media; Eric Trich and Jordan Castilleja’s “PARTIAL PERSONALITY” piece, which will project its participants facial features onto a wall-sized, three-dimensional face mold; and Darcy Neal’s “CubeSound,” which promises to combine elements of light, sound and touch into an all-encompassing experience.

“The whole thing will be a very immersive experience,” Felicella says of Array’s visual art installations. “That’s on purpose. We want to get people to feel as if they’re becoming part of these works. We want them to witness and experience directly what comes out of an artist’s imagination.”

Felicella is especially excited that that the event is being hosted in the heart of Deep Ellum, right next to The Bomb Factory and well within walking distance of the neighborhood’s many restaurants, shops, galleries and bars, as it means that neighborhood regulars and new faces alike can stop by and mingle as they gawk at the installations.

“One of my favorite things that Array is bringing to the table is that it is being held outside of the Arts District, and in a more community-based part of town,” she says. “Sticking it directly into the community is one of it’s best qualities — especially since it’s surrounded by an area where you can enjoy your entire evening.”

For Felicella, though, there’s something bigger at play at this May 12 offering. She says she sees Array as an opportunity for Dallas and its artists to show off a spirit that she feels drives the city’s art scene — and a notion that speaks to the heart of Array’s aim, as well.

“Based off what my experience has been like in Dallas, to be an artist here is to, by nature, be a collaborator,” Felicella says. “That’s not a spirit that is common in other cities. To me, this event personifies what I consider this city to be. This event and this city are both thriving around the concept of true collaboration.”