At Array, Big Gigantic Will March To A New Beat. 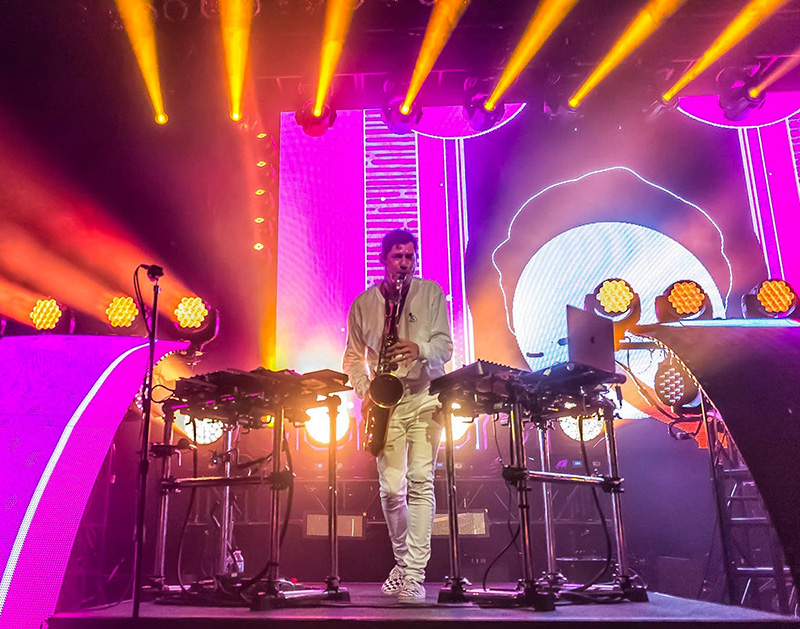 In A Night Full Of Surprising Mash-Ups, The EDM Heroes Of Big Gigantic Will Be Joined By Members Of The Dallas Mavericks Drumline. But What Goes Into Such A Collaboration?

This story is sponsored by Array, a one-night-only event on Saturday, May 12, at Deep Ellum venues The Bomb Factory and Canton Hall as part of the 2018 SOLUNA Festival. Tickets to this unique presentation can be purchased here.

When the revered, Colorado-based EDM act Big Gigantic takes the stage at The Bomb Factory on Saturday, May 12, the duo will have a little help in its efforts to match — and perhaps even surpass — the same energy that it has earned a reputation for bringing to music festivals around the globe.

That’s because the group’s set, which comes as part of an exciting new addition to the 24-day Nancy A. Nasher and David J. Haemisegger Family SOLUNA International Music & Arts Festival called Array, will find Big Gigantic backed by the a group of musicians who know a thing or two about getting arena-sized crowds hyped up: The Dallas Mavericks Drumline.

The collaboration is just one of many exciting mash-ups that are set to take place at Array, which will also find  iconic New York rapper Nas performing portions of his set with members of the Dallas Symphony Orchestra, Icelandic indie rockers Kaleo having their sounds interpreted live on-stage by the Dallas Neo-Classical Ballet, and genre-bending English singer-songwriter Jacob Banks backed by the vocal talents of the Booker T. Washington HSPVA Gospel Choir.

For Todd Jackson, a 10-year veteran of the Dallas Mavericks Drumline, the opportunity to perform on stage with an act that has graced Bonnaroo and Lollapalooza’s stages is a challenge that he and the seven drumline members who’ll join him at Array are refusing to take for granted.

“It’s not every day that we get to do something like this,” says the snare drummer. “In the 10 years I’ve been [in the drumine], this is the first time that we’ve been able to perform with somebody who is at Big Gigantic’s level.”

To ready themselves for this rare opportunity, Jackson and his colleagues have spent more than two months preparing and practicing for their moment on the Array stage, staring with when he and three of his fellow drumline met up with Big Gigantic as the act came to town for a gig back in February. At that performance, they were able to meet with Dominic Lalli and Jeremy Salken and start conversations anticipating their upcoming shared performance.

Since that meeting, Jackson says he has remained in close touch with the twosome, swapping email notes about what their joint set will sound like. Although he can’t share too many details in advance of Array’s arrival, Jackson says he has been impressed with how easygoing Big Gigantic has been about the process, and that he believes the group’s down-to-earth mentality likely means that these two seemingly disparate entities will find their sounds meshing well on stage.

“We want to make sure that we bring it and make the most out of this opportunity,” Jackson says. “That’s why we’ve been sitting down and writing music — to be ready to go and perform with Big Gigantic and express true musical freedom and musical expression alongside other artists.”

When we reached out to Big Gigantic, the classically trained Lalli echoes that sentiment, noting that he and Salken are excited about being able to provide Big Gigantic’s Dallas fans with what he is quick to call a “unique” show.

Over the course of our correspondence with Lalli, he was able to share a few more details with us about Big Gigantic’s upcoming collaboration with the Dallas Mavericks Drumline.

Check out what he had to say below.

So, obviously, Big Gigantic is no stranger to collaborations at this point in your career. What is it about collaborations like the one you’re going to be performing at Array that you think musicians and music fans alike find appealing?
Well, I think the thing that happens is you tend to get both of the artists thinking outside the box, so it usually ends up being a really fresh idea, which I think is what fans just absolutely love about them.

How do you typically begin a collaborative process like this one?
It starts by checking out the music that the person you’re collaborating with makes, and then the ideas just start flowing in from there.

What about this Array showcase is different for you guys in terms of collaboration?
We’ve done things like this before, for sure, but we don’t always get to collaborate with a whole drumline for our live show! So it’s exciting for us, for sure.

What are your impressions of the members of the drumline at this point?
They’re great musicians. We are gonna put on a super cool portion of the show together.

Are you familiar with the other collaborations coming to Array? Any thoughts on what they might have in store?
We’re big fans of all of these artists, so it’ll be cool to check out what everyone does.

Cover photo of Big Gigantic courtesy of Array. For more information about SOLUNA and to check out its entire schedule of events, head here.