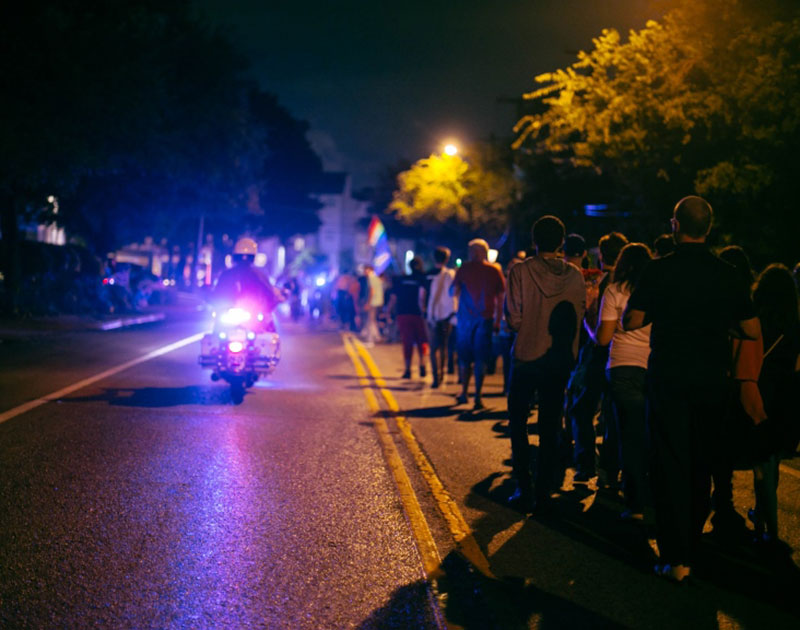 Editor’s Note On June 22, 2020: In the wake of ongoing nationwide police brutality protests in late May and throughout June 2020, this story has received a significant spike in traffic and interest.

To be clear: The bill in question was proposed in July 2017 in the Texas House of Representatives, and failed to make it out of the first stage of legislation in August of the same year.

Days before the bill was officially left dead in the House, a man who rallied with white nationalists in Charlottesville, Virginia, drove into a crowd of anti-alt-right peaceful protesters, leaving a 32-year-old woman named Heather Heyer dead.

Dallasites know how to protest.

In recent years, we’ve protest against police brutality, oil pipelines, Donald Trump, anti-immigration and refugees legislation, homophobia and laws that would work against women’s equality. As a city, we’ve gotten pretty good about keeping things civil at these things, too!

But that civility could be tossed out the window by a new bill filed by Pat Fallon of Texas House District 106 in Denton County. Fallon’s proposal, House Bill 250, would make it semi-legal for a driver to run over a protester if that protester is blocking traffic.

The exact wording of the bill is as follows:

(1) the person operating the motor vehicle was exercising due care; and

(2) the person injured was blocking traffic in a public right-of-way while participating in a protest or demonstration.

If you’ve ever been to an organized rally downtown, you’ve probably seen how Dallas Police work alongside demonstrators to block off streets and clear a path for those marching — even when these proceedings take place peak rush hours when people are leaving downtown, either to their Dallas neighborhoods or the safety of the suburbs.

In fact, before last year’s deadly ambush of police during an anti-police brutality march on July 7 in Downtown Dallas, police were happily escorting and interacting with those very demonstrators, keeping them safe from traffic.

But should Fallon’s bill become law, there’s a chance that a person who would run you over during a protest would not be held liable for injuring you. As of 10:40 this morning, the bill has been read and referred to the Judiciary & Jurisprudence Committee for future consideration.

It seems unlikely that the bill stands a chance to progress any further than this — only bills that have been called for consideration by Texas governor Greg Abbott can be debated during this current 30-day legislative session, and Abbott has tasked the legislature with addressing some pretty big items, like school finance reform, the controversial “bathroom” bill and mail-in voter fraud. But, while we’d like to think that bills that would allow for the legal injuring of people expressing their right to freedom of assembly aren’t even worth our elected officials’ time, we could say the same about those officials’ thoughts on where we can and can’t use the bathroom.

So, y’know, the fate of this bill is anyone’s guess.