56 Things To Do In Dallas This North Texas Beer Weekend. 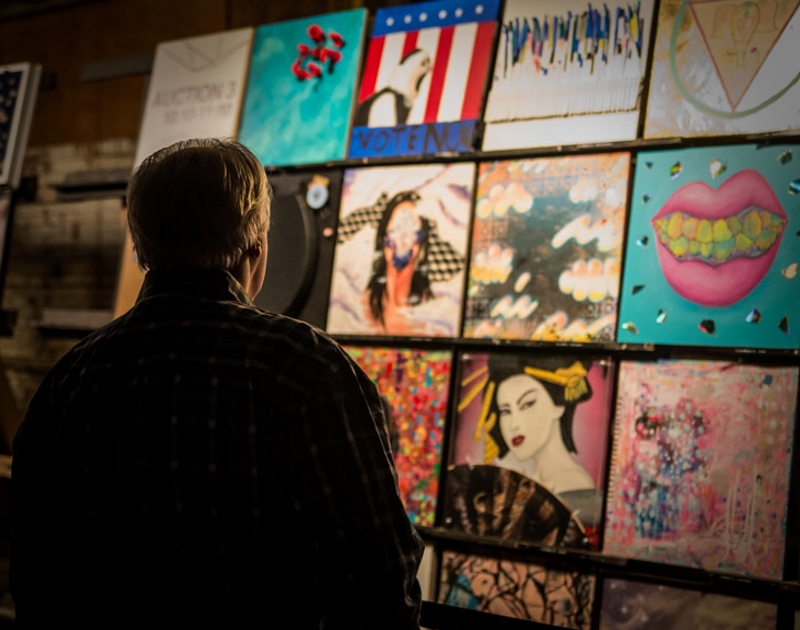 Celebrate a Byrds Classic at 50, Laugh With Aziz Ansari and Michelle Wolf, Do Some Good at Art Con and Meat Fight’s Charity Events and More.

Using cling wrap is often a tricky mess. The only thing it ever seems to stick to is itself.

If you plan ahead and start storing that stuff in the freezer, however, it becomes way more manageable. It temporarily stops sticking to itself as much and instead sticks to your dishes. Then, when it warms back up, it reverts back to its old stickier self.

Lots of things become easier when approached correctly. Take this weekend, for instance. Instead of just leaving the house and hoping for the best, you can peruse the list below and make a solid choice in advance. — Cory Graves

Aziz Ansari at The Theatre at Grand Prairie
Ten months after sexual misconduct allegations, the Master of None  mastermind dips his toes back into the stand-up world, working out some new material in this comeback special of sorts. — CG

Gurf Morlix at Fort Worth Live
Most folks’ biggest regret after watching Ethan Hawke’s recent Blaze Foley biopic was that they hadn’t heard of the singer-songwriter while he was still alive. Don’t make that mistake again, because his similarly talented buddy is still here and deserving of that adoration in life. — CG

Wye Oak at Deep Ellum Art Co.
While the duo has spent most of their lives together in Maryland, the success of their 2011 album, Civilian, put them on opposite sides the map with new inspiration and momentum despite the distance. In sharing ideas back and forth, an evolution took place, and birthed Shriek, the group’s fourth full-length album. — Lauren Keuning

Heitz Cellar Wine Dinner at Pappas Bros. Steakhouse
Join one of Napa Valley’s most iconic wineries at the home of one of Dallas’ most impressive wine cellars. — CG

Kyle at House of Blues
Hopefully when you get to HOB you’ll find an XXL Freshman embarking on his first headlining solo tour, and not just some guy welcoming you with a, “Hi, my name is Kyle, and I’ll be your server today.” — CG

Tech N9ne, Dizzy Wright, Futuristic at Gas Monkey Live
Somehow, over the last few years, Tech N9ne, one of the most successful independent rappers ever, has aligned himself with the likes of the Insane Clown Posse and their hyper-loyal juggalo fan base. It makes sense why an artist unaffiliated with the major label system would want to attract a built-in group of fans as wholly-devoted as ICP’s, but, for whatever reason, the so-called juggalo family has embraced Tech N9ne right back. Expect plenty of face paint among the Gas Monkey crowd tonight — more than usual, we mean. — CG

The Marias, Triathalon, Toast at Cambridge Room
The Ones to Watch band just released its deubt LP this year, and is already making waves with its “dreamlike fusion of jazz, psychedelia, funk and lounge.” — CG

Saints of Valory at Gas Monkey Bar N’ Grill
No, “valory” is not a word, but we’ll let that slide. Though Saints of Valory’s four band members come three different continents (South America, Europe, and the U.S.), they all currently live in Austin, TX, so we’re proud to accept and support them as our now-fellow Texans. Perhaps you will, too, when the band performs this weekend. — Carly Seitz

Magna Carda at Three Links
Austin’s answer to The Roots brings its live band hip-hop up I-35. — CG

Larry g(EE) (EP Release) at Scout
The local pop star continues his comeback, celebrating the release of his first EP in seven years. Read all about it here. Ronnie Heart, Seysei, JACQ and Devi open. — CG

Michelle Wolf at Texas Theatre
Now that her Netflix talk show has been canned, this stand-up tour is the only place to catch the feminist humor of the former Daily Show correspondent who famously made waves with her ballsy remarks at this year’s White House Correspondents’ Dinner. — CG

TJ Miller at Hyena’s Dallas
Now that he’s no longer welcome on the set of Silicon Valley, this stand-up tour is the only place to catch the sexist humor of this asshole. — CG

Etsy Dallas Jingle Bash at F.I.G.
Since ’07, the organization Etsy Dallas has been organizing independently run art and handmade craft shows in the area, encouraged and supported local crafters as well as the handmade movement as a whole. A full bar, live music and an overall hipper vibe ensure it won’t be just another typical quote-unquote craft show. — CG

Fifteenth Anniversary Party at Double Wide
I’ve got many memories of debaucherous, fun times we’ve had at Double Wide — most of them fuzzy. In my defense, that’s what the Double Wide does to people — and has done for 15 years now from its perch on the easternmost edge of Deep Ellum. The place just inherently invites a certain wheels-off vibe; it’s what gives the spot its edge and its charm. Valient Thorr, Eleven Hundred Springs and The Gorehounds will be on hand to celebrate, along with a draglesque show, live tatts, Easy Slider and Photo Wagon. — Pete Freedman


Art Con 14 at 1201 S. Ervay
The city’s most fun charity art auction and party finds another new empty warehouse to host its good times, and another local art organization to bestow some funds to. — CG

Hagfish, Loafers at Three Links
When not splitting time with Rise Against and Toadies, the brothers Blair get the old band back together to rock your lame ass. — CG

Phosphorescent at Granada Theater
After a decade of hard touring, the country/folk/indie-rock hybrid slowed his roll the past five years, moving from New York to Nashville, getting married, having a kid and almost dying. His first new album back at it after that five-year gap is a measured one, and thoughtful in approach. Liz Cooper & the Stampede open. — CG

Covered Tracks: Duell/NRDC at Common Table (Free)
It’s our new, recurring series. Each go-round we’ll be presenting one band, playing two sets — the first one featuring their originals vs a second tribute set to their heroes! Kicking it off is the five-piece Fort Worth party rock band, DUELL vs NR/CD, The REAL Tenacious D Tribute. — Anton Schlesinger


Wade Bowen at House of Blues
Following a recent vocal surgery that sidelined his band for a few months, Wade Bowen’s back at it. He brings the gentle country this weekend. — CG

Cool Out at Off the Record
The LG’s coolest party of 2008 returns to its current Deep Ellum home for its monthly, second Saturday offerings. — CG


Casey Donahew at Texas Live
The Burleson-raised Donahew has been a Texas bar rock staple for going on 14 years now. Even though his band has since become bigger players in the national country scene in recent years, they’ll still drop a song or two about the Fort Worth Stockyards on you. For that matter, you’re likely to hear a countrified version of a classic hip-hop song or two at this one, as well. — CG

Forty-Four Warehouse Sale at 44Build
After designing and building out your favorite local bars, shops and restaurants, 44Build has got some extra materials on hand to get rid of. The sale includes furniture, decore, fixtures, architectural materials, lighting, clothes, rugs and more. — CG

Meat Fight at Sixty Five Hundred
At this year’s incarnation of North Texas’ biggest and baddest charity meat worship service, a dozen Dallas barbecue chefs will be taking on notoriously tough Texas Monthly barbecue critic Daniel Vaughn. The winners, of course, will be our mouths and the thousands of dollars that’ll go towards multiple sclerosis causes. — CG

The Moors at Theatre Three
At first, we thought Jen Silverman’s new play was called The Moops, but then we realized it was definitely a typo, bubble boy. Continuing its run this weekend, and going through November 18, the dark Victorian comedy is both whimsical and mysterious. — CG

“What Will the Neighbors Think?” A Photographic Exhibition at Lucas Street Antiques
Dickie Hill promises an exhibition of photos that are weird, quirky and endearing. — CG

North Texas Beer Week Hangover Brunch at Community Beer Company
After a week’s worth of beer parties, you’re going to need a good hangover brunch courtesy of L.U.C.K., and of course some hair of the dog from Community. — CG

Fort Worth Marathon at Panther Island Pavilion
Run on. — CG

Good Charlotte at House of Blues
The emo staples have purportedly grown up, releasing a new pop rock album about the pitfalls of drug addiction. RIP Lil Peep. — CG

Death From Above, Le Butcherettes at Gas Monkey Bar N’ Grill
In 2014, the once-defunct Canadian punk duo Death From Above 1979 released its first new album in over a decade to somewhat mixed reviews. The release also coincided with a documentary called Life After Death Above 1979, which you can rent via Vimeo on-demand. — CG

Mitski, Overcoats at Trees
Mitski (read: 26-year-old New Yorker, Mitski Miyawaki) says music is the only reason she hasn’t offed herself. Instead she mines all her pain and suffering for critically-hailed DIY punk that earns write-ups and praise from lofty pubs like the New York Times. Openers, the Overcoats, will also do a free set at Good Records beforehand. — CG

Emmure, Stick to Your Guns at 2513 Deep Ellum
The New Fairfield, Connecticut metalcore outfit pulls from the industrial and nu metal genres. It’s style helped it establish itself and find a dedicated fanbase since coming onto the scene in 2006. Now Emmure is back on tour after releasing its seventh studio album, Look at Yourself. — Juan Betancourt


Tori Kelly at Majestic Theatre
She started on YouTube. She did a marvelous cover of a Frank Ocean tune that gained millions of views. And now, she’s touring across the United States. Tori Kelly, the talented Californian bombshell, embarks on a new tour in support of her sophomore full-length  Hiding Place. — Jessi Pereira

Lissie at Granada Theater
Lissie is an Illinois singer-songwriter focused on creating her own niche in indie folk music. Her music has a focus on a heavier atmosphere than most modern folk music and strong, story-driven songwriting. — Paul Wedding


Cranksgiving at Local Hub
It’s a scavenger hunt that’ll be carried out on bike — but you’ll find all the events at local grocery stores, and then donate them to a local food bank. — CG

Carol Burnett at Winspear Opera House
How much does a Tim Con weigh? Just one example of the types of questions you can ask the comedy pioneer and legend at this Q&A event. — CG

Print Jam at Kimbell Art Museum (Free)
A showcase giving local printmakers an opportunity to show off their skills and newbies to try their hand at it. — CG