42 Things To Do In Dallas This Weekend. 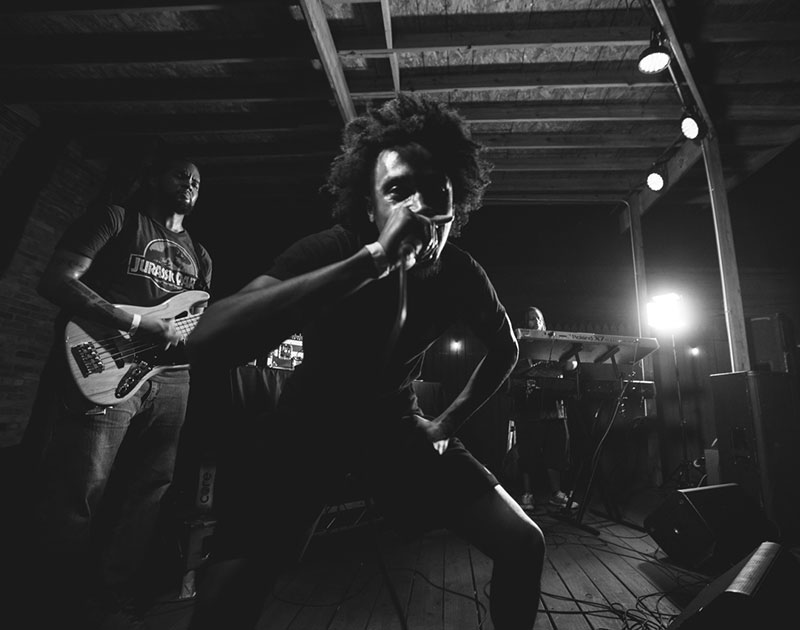 Revolt With Bobby Sessions, Go All In With Xtreme Knockout’s MMA Fights, Cheer on the Cowboys, Get Your Girl Scout Cookie Fix and More.

A man in California was recently caught on a home security camera licking someone’s doorbell for three hours. He also urinated in the strangers’ front lawn for good measure.

That’s one way to kill a weekend. Another? Sanitizing your doorbells, y’know, just in case.

Once that’s all done, there are 42 other things to do around town this weekend. — Cory Graves

Bobby Sessions at Trees
Bobby’s Def Jam debut EPs — a concept album of sorts — brings the frankness of the barbershop to the streets, spitting harsh truth after harsh truth in hopes of starting a revolution. It’s brutal. It’s honest. It’s uncompromising. And it’s the kind of stark realness the world needs right now. We’re living in crazy fucking times, and the music on the radio isn’t reflective of what’s going on. Every track on this thing is thought-provoking, as Sessions takes on racism, police brutality and a number of other issues affecting the black community with unapologetic candor. Like his Def Jam label mates in Public Enemy before him, Sessions says the things other rappers think but are too afraid to say on tape. That’s an attribute that makes both volumes of RVLTN an uncomfortable listen in spots — but only because every bar he spits is the truth. — CG

THX1138 w/ Live Intro at Texas Theatre
George Lucas’ sound company was named after this, his 1971 debut sci-fi feature. An actress from the film will be there to introduce it, and the Verdigris Ensemble will be on hand for a pre-show performance. So get there early, I guess. — CG

Herman’s Hermits Starring Peter Noone at Eisemann Center
There are multiple versions of the British Invasion group touring, but this is the one featuring original lead singer Peter Noone. — CG

Cracker at Billy Bob’s
Gonna go out on a limb here and assume we weren’t the only ones that erroneously attributed the alt-rockers’ big ‘90s hit “Low” to Tom Petty. Other mainstay from the era, Camper Van Beethoven opens. — CG

Mike & the Moonpies, Jamie Lin Wilson at Kessler Theater
In separate year-end listicles, the Austin honky-tonk outfit was named Saving Country Music’s best live performance of 2018 and their Steak Night at the Prairie Rose record was named one of the 20 best Americana releases of the year by Rolling Stone. And opener, Wilson, not only co-wrote a tune on the most recent Turnpike Troubadours record, but appeared on the bands’ recent Austin City Limits taping as well. — CG

A.M. Ramblers, Danny Diamonds at Dan’s Silverleaf
Bring enough dough with you to this one to afford at least seven shots of tequila. — CG

The Modern Jungle at Alamo Drafthouse (Cedars)
The Thin Line Fest brings you this “portrait of globalization filtered through the fever dream of a Mexican shaman, don Juan, who falls under the spell of a pyramid-scheme-marketed nutritional supplement.” — CG

Breathe Carolina at Stereo Live
Like regular EDM, but more impressive due to the fact it’s performed by a live, four-piece band. — CG

Good Times at the Drunken Clam (Family Guy Pop-Up) at The Whippersnapper
It seems today that all you see (in Dallas, anyway) is Instagram-obsessed museums and places to take selfies. But where are those good old-fashioned values on which we used to rely? Hell if we know. All we can say for certain is that you won’t find them at the intersection of Henderson and McMillian, as The Whippersnapper has been transformed into Dallas’ latest “immersive experience” for the next few weeks. — Pete Freedman

Randy Houser at Texas Live
The guy that wrote “Honky-Tonk Badonkadonk” will play some better songs here — as in the ones he kept for himself. — CG

Sianvar at 2513 Deep Ellum
We’ll save some time here by skipping the adjectives and simply letting you know Sianvar is dudes from Dance Gavin Dance, A Lot Like Birds, Hail the Suns and Stolas. Sounds pretty super. Ghost Atlas, Wolf & Bear and Animaljam open. — CG

Dave Eggers & Mokhtar Alkhanshali at Dallas Museum of Art
Best-selling author Eggers and the subject of his latest book, The Monk of Mokha, the true story of a Yemeni-American caught up in a civil war, will both be on hand for this presentation. Tickets include a paperback copy of the book. — CG

The Throwback 90s Back 2 Skool Bash at Andy’s Bar
A ’90s themed bash targeted at folks born too late to remember that particular decade. — CG

gnash at Trees
Los Angeles-based singer, songwriter, producer, DJ, and rapper Garrett Charles Nash (known professionally as gnash) made a name for himself in the Soundcloud scene. His piano ballad “I Hate U, I Love U” peaked number 10 on the Billboard Hot 100 and was nominated for a Radio Disney Music Award in the category of Best Breakup Song. Great news for DFW’s Generation Z crowd, bad news for the Trees bar staff. — Garrett Gravley

Pat Green at Billy Bob’s
In a perfect world, Texas country legend Pat Green would need no introduction, but since the world is awful, Green got the attention of Willie Nelson at an early age and sold 250,000 albums without major label support. His 2003 single “Wave on Wave” launched him to stardom, but in 2011, Green decided to leave that behind and return to independent status. He is playing country music staple Billy Bob’s for the umpteenth time in January to kick off 2019 on a high note. — GG

Monte Montgomery at Granada Theater
Usually when the phrase, “he’s a guitar player’s guitar player” gets tossed around, it’s in reference to someone who is a Grade A wanker, unmatched in his penchant for noodling, but usually at the expense of any songwriting ability whatsoever. Fortunately for Montgomery, that’s not the case. While he’s about the best acoustic guitarist currently touring, he pairs it with a pretty solid roots catalog as well. Jason Elmore opens. — CG

Danity Kane at House of Blues
Some of Diddy’s old Making the Band crew have reunited for a tour — Aubrey O’Day, Dawn Richard and Shannon Bex. Hey, three out of five ain’t bad. — CG

Bayside (Acoustic) at Gas Monkey Bar N’ Grill
Bayside is the school that’s cool and you know that it’s true. The girls are the cutest and the guys are the hippest too. ooh ooh ooh. Other school’s try to touch us, but you know that they don’t have a clue. Now rockin’ and a rollin’ from the morning till the day is through. — Zack Morris

Golden Dragon Acrobats at McKinney Performing Arts Center
The premiere Chinese acrobatic touring company touring the U.S. today, this talented lot is keeping alive some traditions that date back over 2,500 years. So, it’s very likely that Jesus Christ saw a very similar show when he caught the Dragons’ forbearers so long ago. — CG

Dead Flowers (Album Release) at Three Links
DFW’s favorite Replacements cover band drops an LP of originals at this show. The 40 Acre Mule and Jeter’s Revelators round out the bill. — CG

A Justin Rhodes’ Pop Up Show at Spinster Records
Preview and buy works from Justin Rhodes’ “Oak Cliff University” show before it officially goes on display to the general public in February. — CG

The Glitch Mob (DJ Set) at Lizard Lounge
Since its inception in 2006, Los Angeles electronic trio The Glitch Mob have lit up dance floors across the country with its sultry, grime-filled rhythms that are undeniable for any club kids worth his salt. — Evan Henry

Xtreme Knockout All In at Gas Monkey Live
Not to be confused with Cody Rhodes and the Young Bucks’ similarly named event, this All In will feature guys and gals actually getting punched and causing real physical pain. — CG

Stephen D’Onofrio: “Market Research” (Opening Reception) at Galleri Urbane Marfa + Dallas
D’Onofrio takes Warhol’s concepts of capitalism and mass consumerism a step further, taking on retail-driven design. The show runs through February 16, but he’ll be on hand this Saturday to speak at the artists reception. — CG

The Godfather at Alamo Drafthouse (Cedars)
Leave the gun, take the cannoli. — Clemenza

An Evening With Eleven Hundred Springs at Sons of Hermann Hall
The long-haired, tattooed hippie freaks will be holding court with their ever-solid brand of honky-tonk all night long. No openers. — CG

DJ Seinfeld at It’ll Do Club
A show about nothing. — CG

Pedal School: “You Had One Knob!” Boost at Bishop Manor Rehearsal Studios Annex
Dallas sound man and photographer David Wilson will teach you how to make your own effects pedal, here. For this edition a simple, but effective signal boost. You will need some soldering knowledge to keep up, but there’s an additional soldering for dummies class you can purchase from the link above as well. That class takes place just before the pedal making one. — CG

1310-The Ticket’s Dallas Cowboys vs Los Angeles Rams of Anaheim Playoff Watching Party at The Bomb Factory (Free)
One of many Cowboys watch parties around town, this one boasts games, prizes, drinks, Ticket schtick and Tier 3 personalities, plus the ‘boys on the biggest of screens. Hook ‘em! — CG

Jamie Kennedy at Addison Improv
There are certain rules that one must abide by in order to successfully survive a horror movie. For instance: 1. You can never have sex. The minute you get a little nookie–you’re as good as gone. Sex always equals death. 2. Never drink or do drugs. The sin factor. It’s an extension of number one. And 3. Never, ever, ever, under any circumstances, say “I’ll be right back.” — Randy Meeks

DJ VIRUS 21st Anniversary at The Church
Joe’s been spreading his infectious grooves at the club-within-a-club for over two decades now. That’s pretty fuckin’ impressive, I don’t care who you are. — CG

Girl Scout Cookie Pop Up at Legacy Hall
We’ve been told it’s Girl Scout cookies season, but we’ve yet to see any scouts out in the wild hawking their beloved Thin Mints. But we’ve gotten advance notice there’ll be an entire troop posted up in Plano ready to stock you up for the year. New Year’s resolutions be damned. — CG