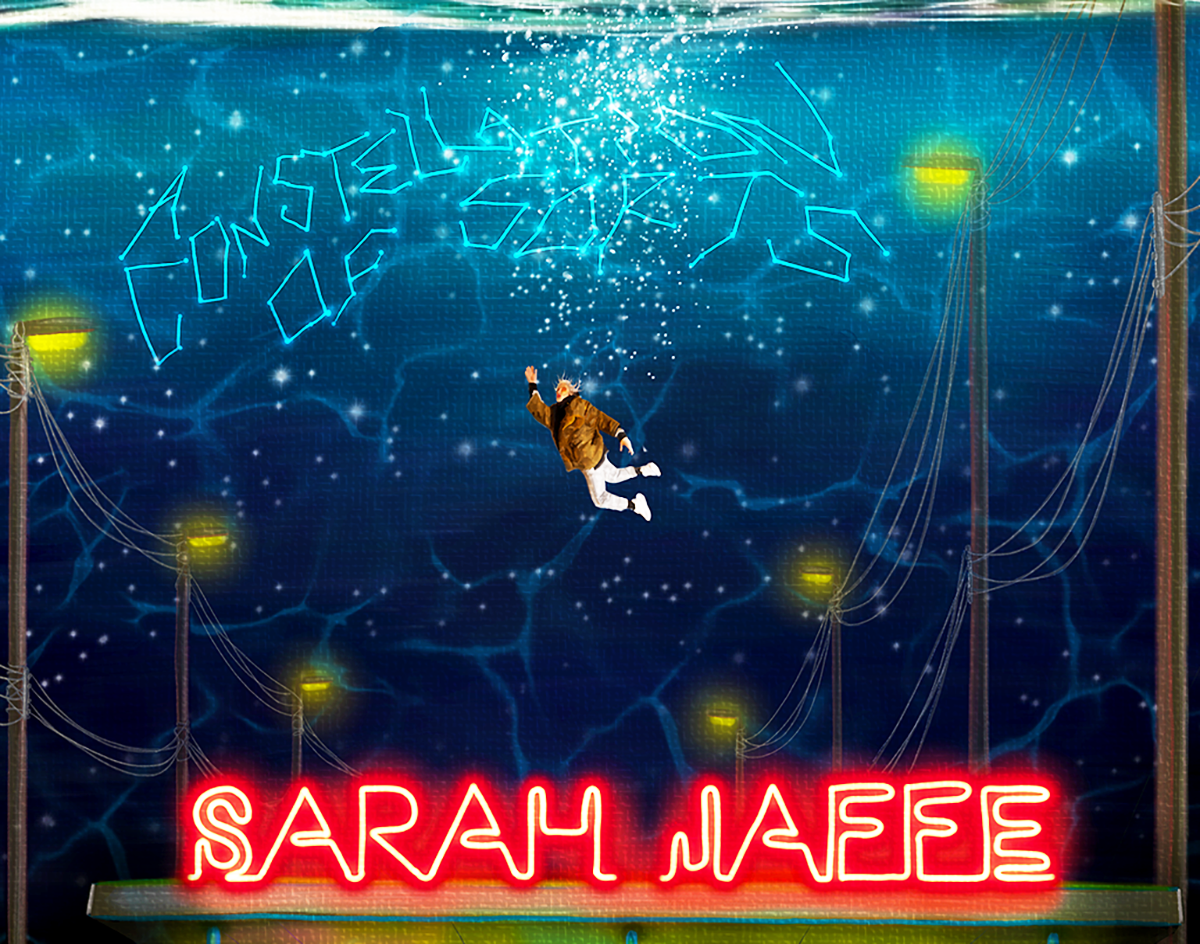 Have A Little Smut With Sarah Jaffe As A Treat, Scream Your Infidelities For Dashboard Confessional And Pop Up For Black Excellence Fest. Plus More!

The Tesla CEO took a break from his busy schedule of sabotaging unions and potentially fathering a child with Grimes to fire up Ableton and cook up some lukewarm dance music.

On Friday, Musk posted the house track “Don’t Doubt Ur Vibe” to his Emo G Records SoundCloud account. It’s better than his “RIP Harambe” rap song (which we won’t even hyperlink here for the sake of your sanity), but that’s not saying much.

The Guardian described “Don’t Doubt Ur Vibe” as “wafty mid-tempo Euro-trance,” an apt, yet somewhat too generous comparison.

Musk wields synth sounds so generic that even the Chainsmokers would cry foul. Meanwhile, his beats are as sterile and ugly as a Tesla Cybertruck.

Ten minutes after the song dropped, Musk tweeted “I wrote the lyrics & performed the vocals,” under the ballsy assumption that writing the phrase “don’t doubt your vibe, it knows it’s true” is something to be proud of. If you have ever yearned for a bizarre fusion of Armin Van Buuren and Unsolved Mysteries, this track is for you.

Being that he’s one of the most recognizable men on the planet, it’s no surprise that his stale meme of a single racked up over a million streams on SoundCloud within 12 hours of it being posted. Still, can we get a vibe check?

There’s plenty of cultural events far more deserving of your attention than the EDM doodles of a bumbling billionaire. Here’s a list of the ones happening in DFW this week. — Daniel Valdez

Celine Dion at American Airlines Center
Celine Dion has recently been under fire for unveiling a new gender-neutral clothing line for children, but she doesn’t care. And if you were raking in money from Vegas residencies and “My Heart Will Go On” royalties, you wouldn’t either. — GG

The Last Great American Rock Band at Rubber Gloves
The jury’s out on whether this band will live up to that name, but its at the very least the Next Solid Denton Post-Rock Duo. — DV

Outward Bound Mixtape Sessions: Harley Deville at RBC
High art and pop, together at last. Performance artist and singer Harley Deville is releasing their first album and is stopping by RBC to celebrate. — DV

Wolf Parade at Trees
Wolf Parade made its name off chest-beating,  ’00s indie-rock anthems like “I’ll Believe in Anything.” After a 6 year hiatus, it’s picking up right where it  left off. — DV

Dashboard Confessional at House of Blues
Our recent interview with frontman Chris Carabba confirmed that he is a bigger emo fan than anybody, but he won’t hold that against us during his band’s Dallas stop. — DV

Tanya Tagaq at UNT
Inuit throat singing might never be fully mainstream, but Tagaq has certainly helped it crossover to new audiences. In 2014, her environmentally-conscious record, Animism, beat out heavyweights like Drake and Arcade Fire for Canada’s prestigious Polaris Music Prize. — DV

Dance Or Die + Valentine’s Clipshow at Texas Theatre
For this month’s Tuesday Night Trash feature, a truly bizarre ’80s anti-drug film about the dangers of cocaine and the joys of hair metal. If you’ve watched any “Behind The Music” special, this should be familiar territory. Come early for a showcase of Valentine’s-themed video oddities. — DV

Jail Socks + Unturned at Rubber Gloves
Rubber Gloves is all in for this double-header of hooky emo tenderness, with North Carolina sad boys Jail Socks and Minneapolis’ Unturned. – DV

Siames at Trees
This Argentinian indie-pop duo is arguably more well-known for its animated music videos than its actual songs, but this show will be fully live-action. — DV

Moon Hooch at Gas Monkey Bar N’ Grill
If you saw They Might Be Giants play the House of Blues in 2013, you might remember this quirky jazz-fusion troupe as the opening act. — DV

Eric Nam at Granada Theater
Granada Theater recommends the silky-smooth pop of Eric Nam if you like BTS or EXO, but chances are good that if you’re into those K-Pop titans, Nam is already on your radar. — DV

Telefon Tel Aviv at Deep Ellum Art Co.
After the death of one half of Telefon Tel Aviv in 2009, Joshua Eustis decided to put the name into hiatus to memorialize the works that he and late Charles Cooper created together. With nearly 10 years of silence, this underground electronic artist is back with a new album and multi-state tour. — MG

Foreigner at Will Rogers Memorial Auditorium
Foreigner will have you feeling like it’s the first time all over again when it bring its 40th anniversary tour to Dallas. — Mason Geear

Bible Study at The Nines
Don’t be fooled by the title, The Nines isn’t branching out into theology. Bible Study is actually the name of the monthly drag show held by local queens Bleach, May May Graves and Frida Monet.  — DV

Laugh Your MASS Off with Whitney Chitwood at Main at South Side
This stand-up showcase is headlined by Chicago comic and “lesbian squirrel in a shoebox,” Whitney Chitwood, who has been co-signed by stand-ups like Maria Bamford and Adam Conover. — DV

Big Head Todd & The Monsters at House of Blues
Todd Park Mohr’s head isn’t that big, but his band is monstrously popular in the jam band circuit. — DV

Black Excellence Fest at Main At South Side
One of the performers at this first annual showcase includes M3CCA, who we recently nominated for Best R&B/Soul Act for this year’s Central Track Music Honors. — DV

Ron Pope at Granada Theater
Pope’s song “A Drop In The Ocean” has been heard at countless wedding receptions likely due to its inclusion in romantic comedy soundtracks. If he plays it live at Granada, you can cry along to it with with the rest of the audience to comfort you. — NJB

The Glorious Sons at Canton Hall
Every country gets the version of Greta Van Fleet they deserve. Here’s Canada’s. — DV

Xetas at Three Links
This trio from Texas is bringing their punk music front and center. With two albums under their belt, the group seems to be ready for more guitar shredding and screaming. — Natalie Bermudez

Casablanca at Majestic Theatre
The synopsis of this film is a bit confusing, but it’s a classic black and white romance movie that takes place during a war in a place called Casablanca. — NJB

Potpourri Dual Stage Festival Vol. 2 at Rubber Gloves
It’s a post-genre world, we’re just living in it. The acts in this showcase run the gamut of Dallas music, from the cozy bedroom pop of Pros and Cons to Paul Slavens’ avant-garde project Kill the World. — DV

Ether Coven at J&J’s
“Doom-metal covers of Björk” is not a sub-genre we ever expected to discover, but then Ether Coven and its version of “Unravel” came along. — DV

Bodysnatcher at Tomcats West
Maybe this Floridian heavy metal band will snatch your wig, too. — NJB

Jasiah and $not at House of Blues
Both of these up-and-coming MCs specialize in grim and grimy internet rap that owes more to Yung Lean than Def Jam. — DV

Flight By Nothing at Gas Monkey Bar N’ Grill
The yearning, sincere alt-rock of Flight By Nothing would fit right at home in the background of a weepy teen drama flick. You can practically imagine the hi-def tears streaming down Ansel Elgort’s face. — DV