Even if you’re not into sports (guilty 🙋) the Super Bowl had some exciting appearances from Dallas’ own. First off, Arlington-born, Grammy- nominated country queen Mickey Guyton was given the honor of singing The National Anthem, as we mentioned last week.

Sadly, though, there was a bit of a hiccup. Before Guyton’s performance, Jhené Aiko was up to sing “America The Beautiful” and NBC showed Guyton, incorrectly identifying her as Aiko with a graphic. The network has issued an apology from a nameless spokesperson on Twitter. Awkward blunder aside, Guyton blew viewers away with her rendition.

And she wasn’t the only North Texan-turned national star that popped up on our screens this past Sunday, as we were surprised to see funny music man Marc Rebillet pop up in a commercial. The ad was for YouTube Premium (fitting, considering he’s doing big numbers on his own YouTube channel) and ran right before the trophy presentation.

This isn’t the first time Loop Daddy was featured in a TV commercial — last summer he became a spokesperson for EDEKA Supermarkets, a grocery store chain in Germany. Rebillet has blown up from a local talent to an internationally-recognized talent through his online presence and move to NYC, and no doubt the on-brand quirky commercial took part in that.

Unfortunately, there’s no link to the full Super Bowl ad that we can find — you just had to be there, we guess — but this Twitter user caught this quick glimpse in all of its two-second glory.

YOOOO @marcrebillet i’m eating breakfast at my hotel and suddenly you’re on the tv??? pic.twitter.com/nXetdUE3xV

In the past couple of years, music venues have really piqued our interest. There’s just been so many recent transformations, closings and openings — and here’s another one to list under the openings column.

Fort Worth chef Tim Love has a big presence in the Stockyards between all his restaurants there — Lonesome Dove Western Bistro, White Elephant Saloon, Love Shack, Atico and Paloma Suerte — but now he’s expanding into the music game. Love will be opening Tannahill’s Tavern & Music Hall which will serve as a live music venue, private event space and of course, restaurant.

Named after Love’s son, it’ll be open in the historic Horse and Mule Barns of the Mule Alley redevelopment and be booked by Live Nation, according to CultureMap.

The venue is set to open sometime this year and the first drop of shows and events will go live on May 5 on its website.

Now onto a different type of love. Selena Gomez is featured on Coldplay‘s latest heartbreak ballad “Let Somebody Go” from the band’s newest Oct. 2021 album Music of the Spheres.

It comes with a cinematic music video directed by Dave Meyers, in which Gomez in black-and-white explores a topsy-turvy city and hugs good ol’ Chris Martin. Meyers has done many other music videos, including Maren Morris’ “Girl.”

Wait a second, Maren Morris? She’s got new stuff too!

Morris just announced her third album, Humble Quest, to be released on March 25. You can expect 11 tracks, including her latest single “Around This Town,” which follow her experience of trying to redefine humility during the pandemic while juggling motherhood, her career and dealing with the death of friend and collaborator Michael Busbee, according to the press release.

Plenty of DFW-tied artists continuing to make big moves this week, we see.

Now, let’s look more local with a couple of new releases and announcements.

Be on the look out for the new concert series “Girls of DFW” which will showcase local female talent. The first show is happening March 3 and while you can definitely expect great music, the event will also host local entrepreneurs who helped bring the series to fruition. 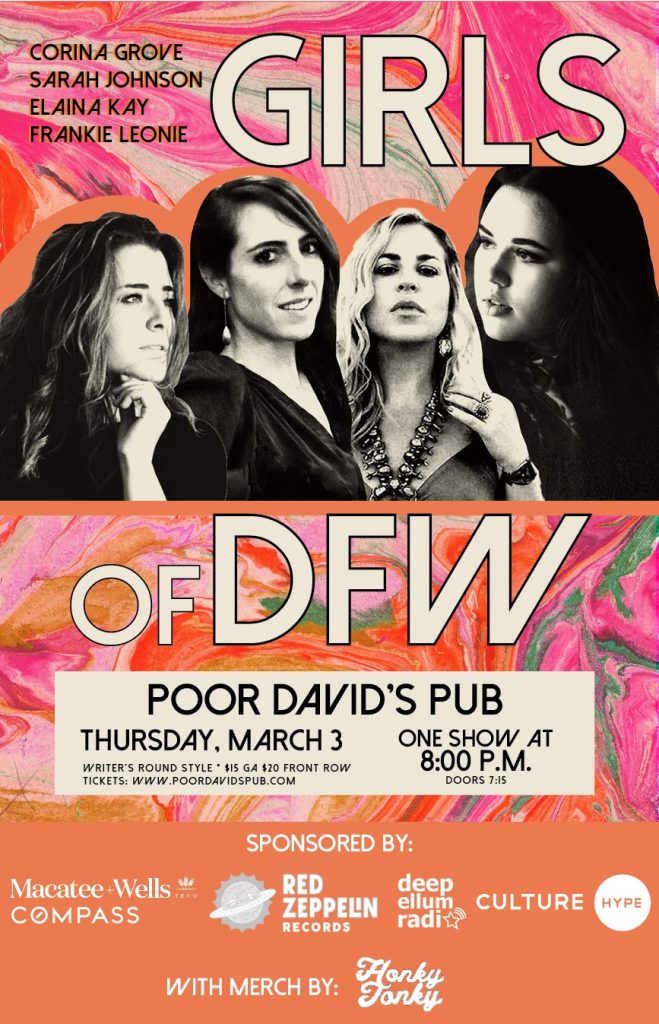 Spike Chester — “all i need”