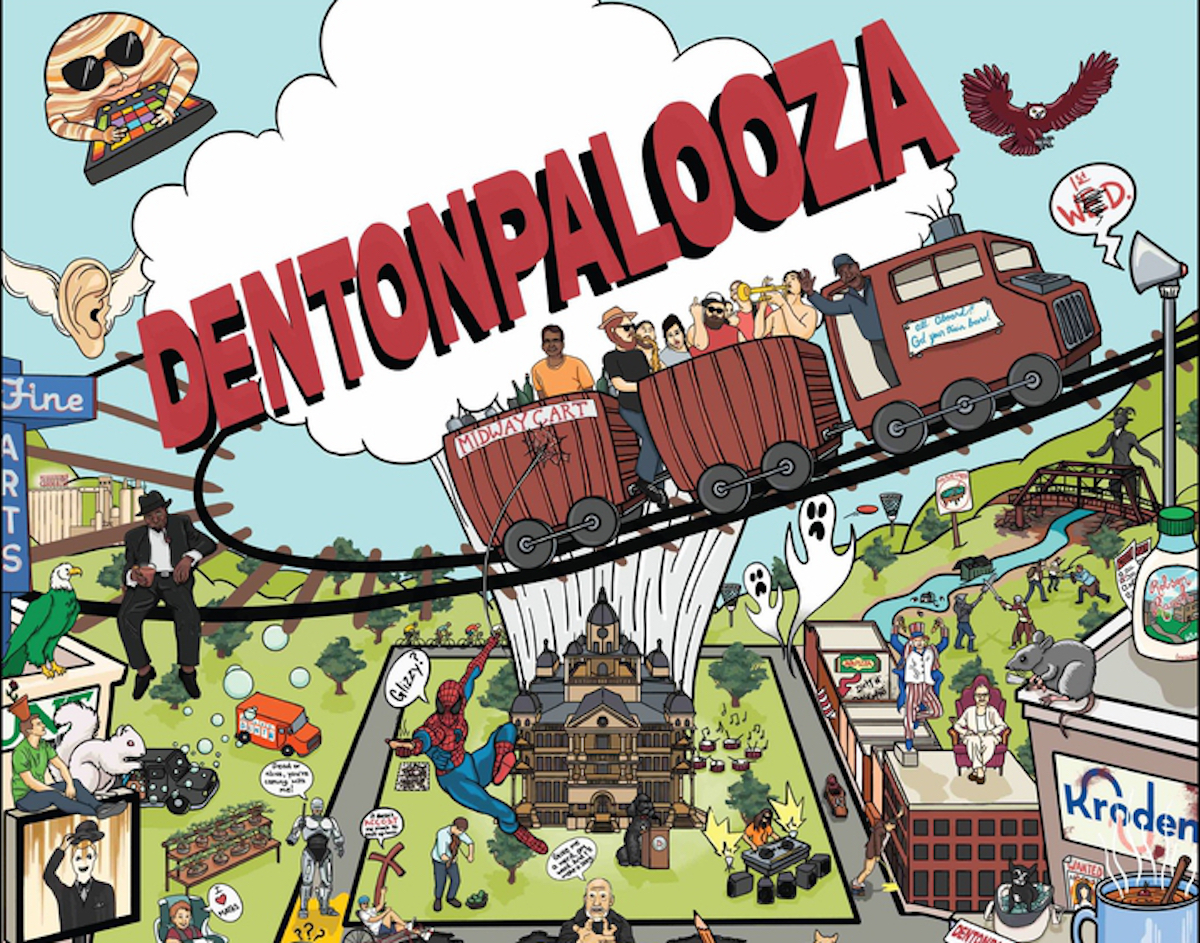 What started out as a Facebook joke quickly came to life thanks to its own quirky residents. If you haven’t seen it yet, there was a music festival-style parody poster that made rounds all over Facebook back in August. Denton resident Joey Lietchy, also known as DJ Yeahdef, designed the Dentonpalooza flyer with a lineup made up of Denton locals and characters whom many know, love and even hate. It was originally posted on the Denton Downtowners Facebook page and was a huge hit before it became an actual celebration.

Basically, this flyer describes everything that makes Denton, well, Denton. The lineup features local icons like tiger head keyboard dude, Denton Spider-Man, flat Earth guy, Brave Combo, Josh Baish’s ear and more. Some of these you’ve probably seen while driving through town, but others are like little inside jokes between Dentonites.

This lineup actually makes for a really fun scavenger hunt for the next time you’re in Denton. You might not find all of them, but we’re sure some Denton residents hanging on the Square can share some funny stories.

An updated flyer was made into T-shirts and hoodies for purchase. All proceeds from the sales go to two charities, Denton Music and Arts Collaboration and Pancreatic Cancer Action Network.

The festival is set December 3 from 2 p.m. to 1 a.m. at Rubber Gloves Rehearsal Studios. The day will be filled with arts, crafts, eats and meet & greets. There’ll be some wacky slot times, too like a psychedelic flute player featuring Denton Spider-Man at 4:40 p.m., Frenchy interview at 9 p.m. and a flatten the Earth piñata party at midnight.

Truly a day that will down in history. Denton, you’re crazy and obviously unstoppable. Cheers to that.

Speaking of local celebrities, did anyone catch the American Music Awards last weekend?  If you didn’t, you missed Dallas nominees Erica Banks, Kacey Musgraves and Maren Morris. Banks, a DeSoto rapper, was nominated for Favorite Female Hip-Hop Artist and Favorite Trending Song for her viral, certified-gold track “Buss it.” Over on the country side, Musgraves and Morris were both nominated for Favorite Female Country Artist, but were beat by Carrie Underwood. Big congrats to these Dallas queens for representing! We hope to see more Dallas talent at next year’s AMAs – we’re looking at you, local musicians.

Who else do we want to see more of? Oh, yeah, apparently, Rihanna?!

Twitter went into a panic when Rihanna was spotted at Oni Ramen and Bitter End in Deep Ellum Nov. 14 with her man, rapper A$AP Rocky. She spent a weekend in Dallas celebrating her brother’s birthday at Uptown nightclub Theory, eating at Harlow MXM and dining at Monarch at Thompson Hotel with Dallas-based stylist Nini Nguyen.

Theory even had a sign that read “Drop The Album Rihanna,” which she announced is in the works back in September. There’s still no release date for it but it will be her first drop since her 2016 album Anti, which means we must go all out once it does.

They had a sign saying “Drop the album Rihanna” at the club and Rihanna just filmed it 😭😭
Via Instagram/chelley_bee. pic.twitter.com/2JG759cDri

Rihanna, sweetie, please come back. We have plenty of room for you and Fenty Beauty here. We’ll show you all the things that make Dallas great.

If you had to spend a day with Rihanna in Dallas, where would you take her? Personally, we’d take her to a session with The Waiting List and introduce her to the Dallas rap and hip-hop scene.

The day after Rihanna’s Dallas adventure was a big day for gamers. For its 20th anniversary, Halo released the new Halo Infinite game with a multiplayer mode soundtrack that was composed in Oak Cliff. Alex Bhore, the composer, runs the Elmwood Recording Studio where the music was created. His music is heard everywhere in the game, including the menu and loading screens.

If you’re playing Halo Infinite this week, remember this Dallas connection and how this city’s talent is thriving and will not go unnoticed.

A good example of that is the late Dallas rapper Mo3, who was hailed by XXL Magazine as one of the Texas rappers making national noise in recent years alongside Yella Beezy last year. We knew in 2018 that his “unique rap delivery” made him the next rising rapper in Dallas. Unfortunately, his life was tragically cut short over a year ago when the 28-year-old was shot while traveling on I-35E near Clarendon Drive on the way to film a movie scene on the morning of Nov. 11. His death was a huge loss in the Dallas rap community, which still had yet to see more of his admirable come-up.

Even now, his legacy lives on.

Mo3’s debut film Triple D Revenge, written and directed by Terrence “Mista E” Jones, released in October and is currently available to stream on YouTube. The rapper plays a hitman of the film’s antagonist who “is prepared to terminate anything with extreme prejudice by lethal force.” The film is a sequel to the 2014 film Triple D and will continue a thrilling crime story about two men who want revenge after losing a loved one to the drug business. You can watch the trailer down below.

Many are also mourning the death of Young Dolph, who was shot in his hometown of Memphis while out buying cookies at a local black-owned bakery last week. He was 36. This death marks another rapper gone too soon. In 2016, his debut album King of Memphis reached #49 on Billboard 200 without any guest features. Last year, Young Dolph was featured on “Gary Payton” by Dallas rapper Trapboy Freddy and starred in the German Torres-directed music video.

Aside from his successful debut album and charting singles, Young Dolph was also known for leaving a legacy in Memphis, where he was considered a local hero. From handing out turkeys at a church ahead of Thanksgiving to donating $25,000 to his former high school, the rapper gave back to his community in a number of ways and touched the lives of his fans and those in need. His helping hand even stretched outside of his hometown.

Last year, Young Dolph personally delivered a $400K Lamborghini to a Dallas resident — a woman who was pregnant with her first child and struggling to keep her nail business afloat during the pandemic — after winning a contest that promoted his album Rich Slave.

We lost a good one.