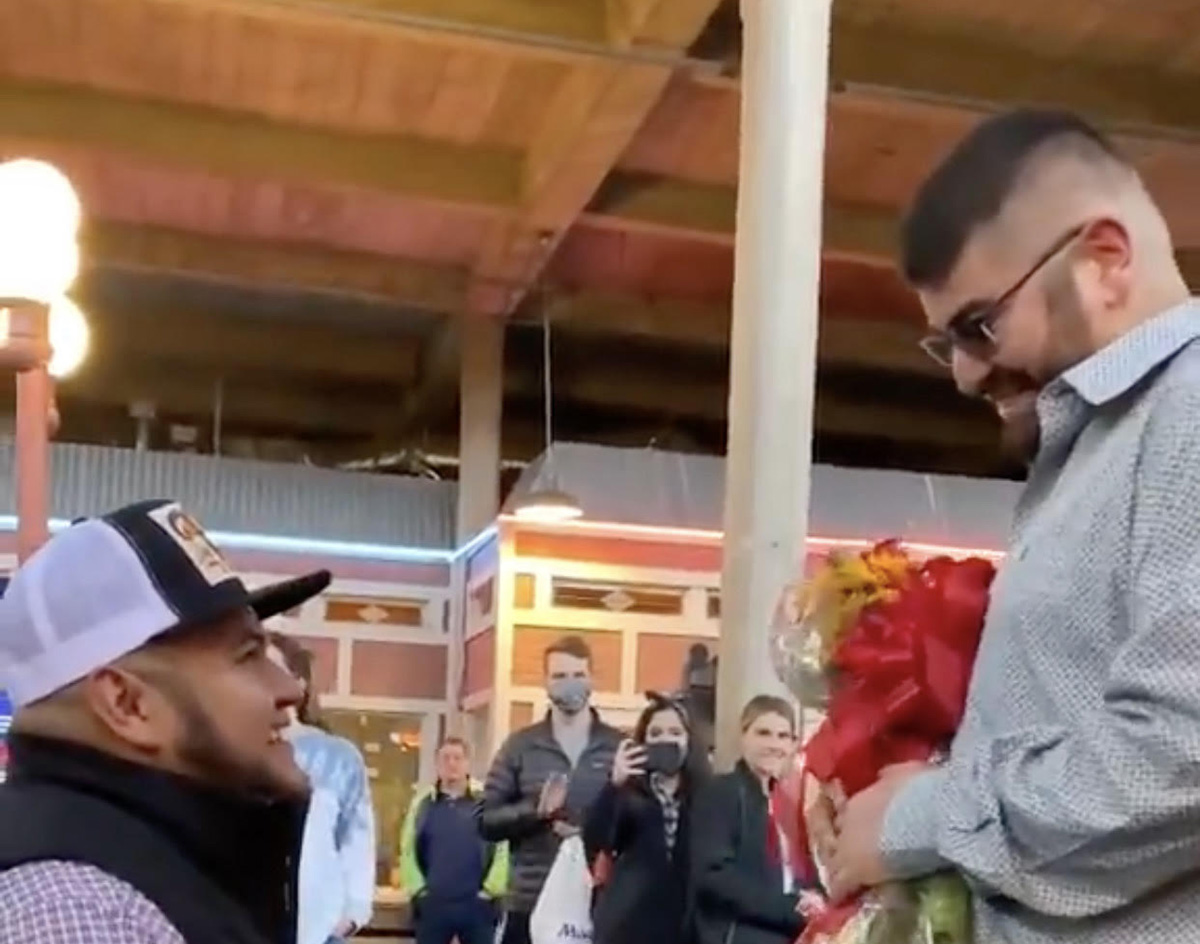 A Fort Worth Couple’s Proposal Is Going Viral On Social Media This Week — But Probably Not For The Reasons You Might Expect.

A Fort Worth couple is going viral this week after videos of their marriage proposal made the rounds on various social media platforms like Twitter and TikTok.

But the attention isn’t due to an elaborate flash mob or playful prank — rather, people are just celebrating two men’s joy right in the heart of one of Texas’ largest conservative counties.

The video was first posted by TikTok user @laramd2083, who identified herself as the sister-in-law of one of the men.

It has since gained more than a million views across platforms.

The video begins with a man holding a bouquet of flowers as he stands in the middle of the Grapevine Vintage Railroad at the Fort Worth Stockyards. The band Mariachi Imperial De Dallas can then be heard playing behind silver and red balloons that spell out “Will You Marry Me” while onlookers’ jaws literally drop as they realize the proposal is between two men. (We’d be remiss not to mention that the video also shows several people who need a mask; sure, love is beautiful, but we’re still very much in a pandemic.)

Strangers watching the moment are later seen cheering, clapping and pulling out their phones as the first man drops to one knee and pops the question.

Such a public proposal between two gay, Latinx men might seem a little more common in a city like Austin or even right here in Dallas. And though Fort Worth is home to some gay bars and nightlife, people who shared it on social media and were familiar with the city expressed pleasant surprise.

Especially in conservative ass Fort Worth in the middle of the stockyards. The support is rare and beautiful.

The fact that they did this in one of the largest conservative cities in Texas, is what i think made this a big win!!!

So huge for latinx to show their love in public AND in The Stockyards.
Such a moment! pic.twitter.com/sev5MD0qev

Fort Worth has seen slow, albeit noticeable, changes in its demographics in recent years, but has long been considered one of the last major-city conservative strongholds in Texas.

The city has made notable progress in the last decade with LGBTQ protections, though, in the wake of a police raid at the now-defunct gay bar Rainbow Lounge in 2009.

Still: Even in times so consumed by division, it’s nice to signs of growth right here in North Texas.

You really do love to see it.

Now, what are the odds this couple ends up on Ellen? Or perhaps join their fellow Fort Worthian on The Kelly Clarkson Show?