[Q&A] DJ Jejune And The Economy Of The Party. 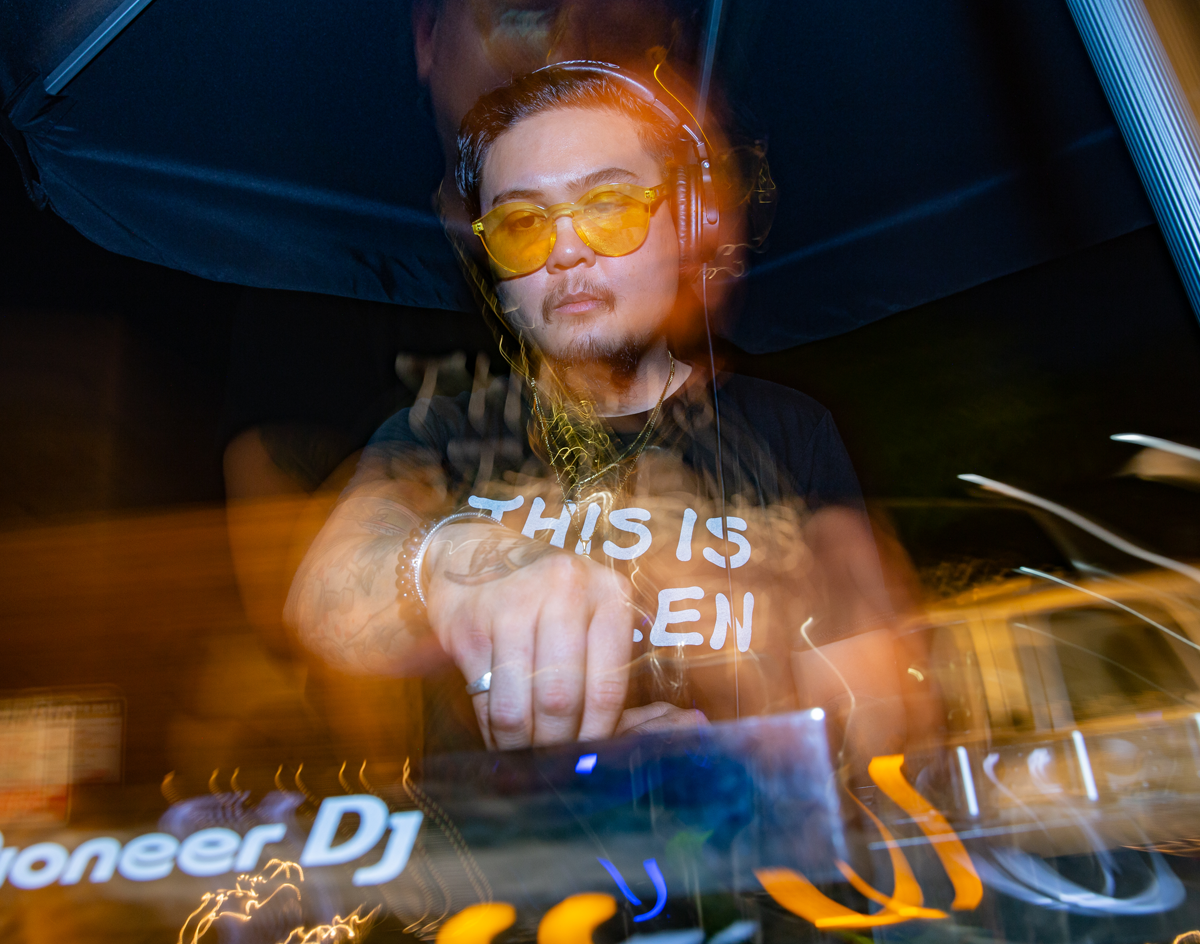 One Of Dallas’ Most Notorious Party Animals Talks The ‘Third Base Rule’, How Working At A High-Profile Nightlife Spot Shaped His Current Career & More.

Jon Garcia’s life is a party — a controlled party, but a party nonetheless.

If you’ve consumed alcohol anywhere in Dallas during the last decade, you probably know Garcia by now. Maybe he’s served you his signature Paloma while behind the bar during the beloved “Hooligan Era” of Parliament, the renowned cocktail bar in Uptown. Perhaps you know him as JEJUNE, a house DJ and part member of the electronic collective Technorotica. Or maybe you don’t know him at all but you do remember partying until 7 a.m. with a guy that looked exactly like him.

Whether you’ve partied with, amongst or because of him, Garcia is a memorable character. Whatever the case may be, for a man that made a career out of the nightlife, he’s still about his business first.

During the day, Garcia works as an ambassador for Black Provisions, a sales and marketing agency responsible for bringing more Texas-made liquor brands like Greenhouse Gin, Townes Vodka, Painted Donkey Tequila and Oak Cliff Whiskey to the city. At night, JEJUNE can be found DJing at places like the Virgin Hotels Dallas and lending the mic over to real estate magnate Bill Hutchinson for a special New Year’s Eve countdown. For Garcia, his livelihood depends on the party — even when the idea of the party is long gone.

We caught up with the nightlife incendiary for a more in-depth explanation as to what that all means these days.

If there’s anyone that could lead a university course on the sociology and science behind a party, it would be you — a party professor. What’s the secret?
I feel like in order to be the party, you have to naturally be an entertainer. I know that people appreciate party components like atmosphere, vibes and how comfortable they are in a certain space.

What does that mean?
Let’s think in terms of safety. Safety is what we will call  “third base theory,” right?  So your first base is your home. Hopefully, you feel comfortable there. Then you have your work, somewhere where you’re required to be, but you feel safe there because it’s your means of income. You spend probably just as much time there as you do at home, right? Then there’s your third place, which could be anything. It’s the place where you go to relax and enjoy yourself. For some homies, that’s fucking Starbucks or the library. For other people, it’s the strip club on a Tuesday.

On a Tuesday?
They’re there to make money. They’re working on a Tuesday! If you were in their place, wouldn’t you want people to come in and spend money?

In a party-centric city like Dallas, there’s a whole group of people that depend on the party as a means to live. There’s a party economy, per se.
Right. Here in Dallas, it’s very evident that there’s not so much you can do to stimulate your social wellbeing other than to go out.

It’s not like Los Angeles where there are mountains to climb and oceans to surf. It’s flat land full of businessmen looking to take potential accounts out for drinks. What are they going to do?
It’s like Chicago. It’s built around this idea that the rich and blue-collar mingle in the same places. Everyone is always pretending to be more than what they are, which is where the pretentious Dallas culture comes from.

For three years, you worked at Parliament, a bar that combines so many various party elements like thoughtful cocktails, a hotel bar feel and a nightclub. Pre-pandemic, that vibe was unique, to say the least.
I would say 2019 was one of my craziest years, but that year yielded the highest-grossing numbers. We were busy all year. We never missed a beat — we were breaking record numbers from every month, every week. There were never downs. We trained everyone to believe in the best shit and set the standard high. That place is tucked away and limited in space. Yeah, not everyone gets invited to that party, but people built their ideas of other bars around that. I’m not saying anyone stole it, because anyone can be hospitable and create a badass place, but we had noise complaints. It didn’t feel like that because we never made it seem like that. It was always all about the guest experience.


How do you maintain control?
Well, Jesse [Powell], Jermey [Elliot] and I all came from working at clubs in Uptown. How do you bring that culture into lighting shit on fire and chopping up iceballs? You do it and you have a lot of fun doing it. I’m not going to work somewhere for 11 hours a day and not have fun. Not only are we making six gin and tonics at once, but we’re also focused on putting on a show that’s so ridiculous and crazy to the point where people are thinking we’re just as busy as nightclubs. But we’re also very controlled and hyperaware of our surroundings. It’s all multitasking and exerting a lot of social energy.

Now you’re working on the other side in liquor sales at Black Provisions for the North Texas market. How has your previous professional career aided to what you do now?
Well, it’s definitely defined how Jesse and I work together now. We’re not only competitive with the people that sell products that match ours, we’re competitive in the sense that we also know what we’re capable of, separately and together. We know we’ve pulled off fucking ridiculous shit out of our asses in very little time before. Now, we’re able to put a little bit more time into R&D into our events and present exactly what we want while also bringing that familiar energy people know and love to our pop-ups.

For someone who has made a career in nightlife, what did it feel like when the party ended A.K.A that first quarter of 2020 when the entire world shut down and the pandemic began?
You know, my career choices of everything I’ve done, especially coming into the year 2020, I thought I was setting myself up for the most success in one place. I felt I was in a position to build all of these young brands from the ground up as well as being able to build myself as an artist doing things that are unique and different. I could do cool shit with my collective. Then the whole city shuts down and no one really knows what’s going to happen. I can’t work — all my paid gigs, everything I had was instantly gone. I couldn’t supplement my income as a DJ, sell products or pick up bartending shifts. There was this immense feeling of helplessness.


But there had to be a turning point.
Well, even when the party felt like it was ending, the people that know how to congregate, regroup and support just switched their approach.

What did it become?
It became little socially distant bike groups. It became whatever you can do to distract yourself from the fact that you can’t really do anything. There are groups of people that just thrive off movement. If your personal goal is self-advancement, you feel good when you’re working. Work is a motivator and when that entire thing is gone, you just fill the void with whatever else will continue to push that drive. When people didn’t have to work, they just started doing other things they never get to do like, binge-watching TV shows for 14 hours a day, or cooking at home, or playing video games or doing all the drugs in their house, or all of the above at once.

But you can’t do that forever.
It’s like when you go on a vacation. After a while, there’s this feeling that I’ve been gone too long. I no longer feel comfortable relaxing on the beach and doing whatever. Too much vacation means we’re not making money. I want to go home and get back to reality. When you’re in the service industry it’s different than PTO in corporate places. A week off means an entire week you didn’t get paid, and that mentality sticks with you forever.


Pretend you’re on CNN and you’re the party pundit. Where do you foresee this year going?
I think we’re in a place where things are a little more manageable now. There’s a vaccine out. I wish people would know that this wasn’t a personal choice. A lot of us have to go back into the nightlife lifestyle. There’s a whole industry of us that had to go back in order to make money and maintain a living. [The service industry] suffered at the expense of being on the frontline exposure of everything that’s going on. There was really no safe way for us to go back. We’re also stuck dealing with the consequences of that on a daily basis.

How so?
There are people doing 14-hour shifts, wearing a mask for 14 hours, and they’re not working at a hospital — they work as a bartender. They’re doing the things that make them uncomfortable at the expense of making other people feel comfortable. But that’s what we’ve always done because that’s just hospitality.

Interesting.
But with that being said, I think there is a big sense of comfortability being normalized pretty rapidly. It’s enough having to be in the situation every night, but it’s even worse when the consumer normalizes it to a greater level.

How has this affected your personal life?
When it comes to going home and seeing family, I’ve spent $800 on rapid COVID testing so far. You feel guilty not being able to be around certain important people in your life or your family. Out of respect, there are birthdays and events that you miss out on. I love the thought of everyone playing it safe and doing it right, but sometimes those options aren’t given. I don’t want people to think that it’s something out of ignorance, it’s out of necessity.

People right now are probably thinking, “does this guy feel any guilt?” What do you say to that?
It does affect our personal life, our way of life. I worry about my mom and dad on a daily basis. They’re both at an age where if they get exposed to that, it’s very risky. There’s always been this guilt in the back of my head that there’s a reason I can’t do things with the people that I love, but it’s because I’m busy putting on a show for the people that “need” it. It’s my job.

Yeah, that sounds like the hospitality industry.
Exactly. We’re a workhorse that’s just going to keep getting whipped whether we’ve got to stay six feet away from each other or are working with masks behind Plexi shield glass.