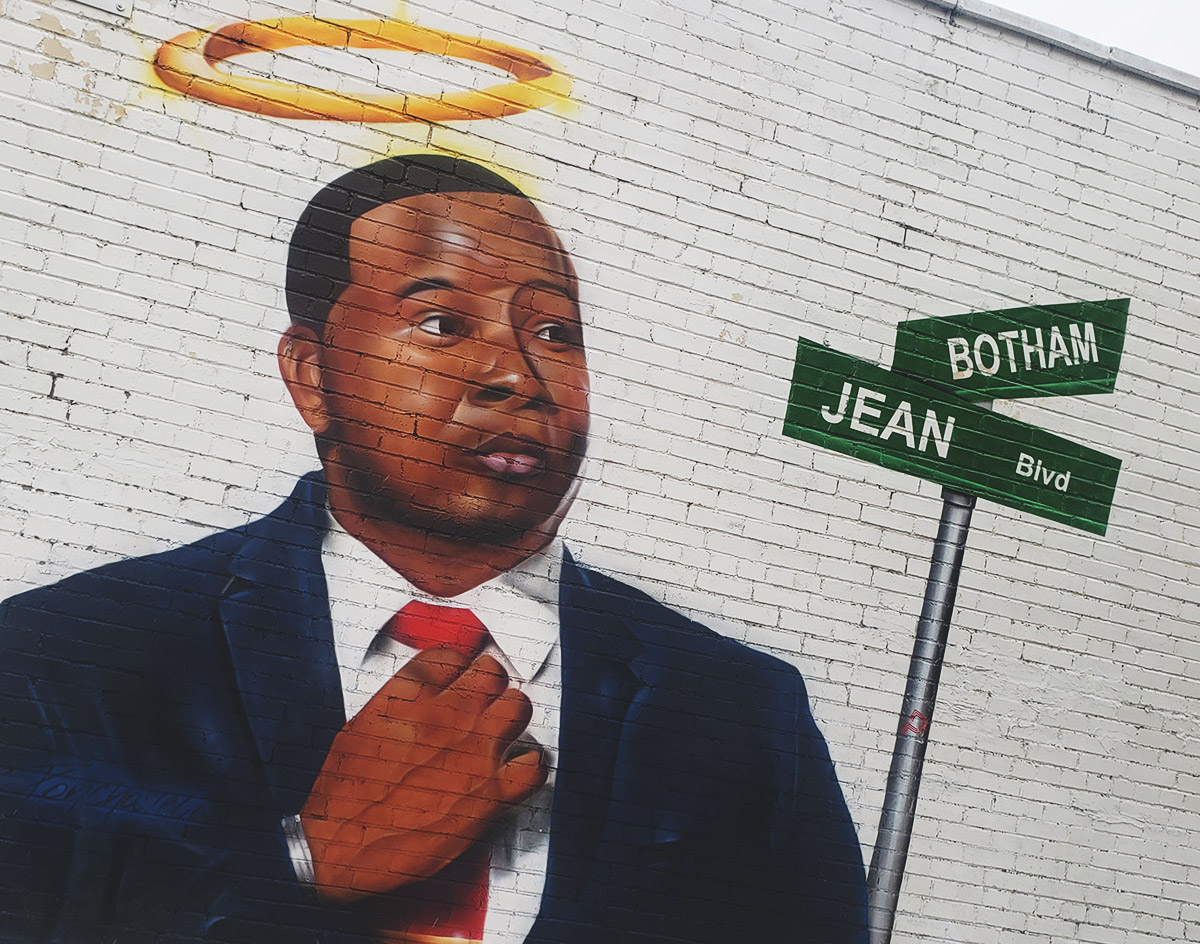 Botham Jean should be turning 29 years old on Tuesday, September 29. Instead, he’s having a day named in his memory by the City of Dallas.

Which, it’s crazy that this even needs to be said, but: It shouldn’t have been this way.

On September 6, 2018, Botham Jean was shot and killed in his own apartment within the South Side Flats complex just south of Downtown Dallas in the neighborhood known as The Cedars. He was eating ice cream on his couch when then-Dallas police officer Amber Guyger entered his apartment, allegedly under the belief that it was her own, before shooting and killing him. At the time, the St. Lucia-born Jean — by all accounts an upstanding citizen, a highly regarded employee at PricewaterhouseCoopers and an active member in his church — was just 26 years old.

From the jump, Jean’s case, we all know, turned the city on its head.

Three days after his death, Guyger turned herself into authorities and was charged with manslaughter. On September 24, she was fired from the Dallas Police Department. Two months later, a grand jury indicted her on murder charges. About a year later, a jury of her peers found Guyger guilty in Jean’s murder — and, as the first Dallas police officer to be convicted of murder since 1973, she was given hugs and sentenced to 10 years in prison.

To this day, Jean’s case looms large over Dallas.

Across a summer in which Dallasites have taken to the streets daily to protest police brutality, Jean’s name has been a constant — and not just because protest marches kicking off at the Dallas Police Department’s headquarters regularly passed Jean’s apartment, located just about a block away, with regularity.

Earlier this month, on the second anniversary of Jean’s death, Dallas Mayor Eric Johnson declared September 29, 2020, as #BeLikeBo Day in Dallas and implored all of the city’s citizens to use the day to “strive to make positive change in the lives of others” as Jean did.

Other, more present politicians, meanwhile, have used Jean’s story in an attempt to spark actual legislative change. On the same day that Mayor Johnson made his declaration, Texas Rep. Carl Sherman Sr. announced a police reform bill he’s calling “Bo’s Law.” In addition to making the castle doctrine more protective of homeowners and clarifying language related to “mistakes of fact” (which Guyger’s lawyers tried using to defend her actions), the bill also includes language punishing officers who turn off body and dashcam videos during investigations (which also applies to Guyger’s actions on the night she killed Jean).

Additionally, Dallas City Council members also announced their intentions in July to change a three-mile stretch of South Lamar Street — including the part that runs past both Jean’s old apartment and DPD HQ — to be named after Jean. While sources on council believe the proposal will pass without contest possibly as early as October, activists in town are now seeking that the entirety of Lamar be renamed for Jean, citing the street’s current namesake’s problematic and racist history as more than enough reason for a greater change.

At the same time, Jean’s story still remains tied up in courts: In addition to Guyger’s lawyers filing an appeal against her conviction (as expected) in August, Jean’s family filed its own lawsuit in earlier September against the South Side Flats apartment building where he lived, citing its faulty locks and confusing layout as contributors to his death.

Even nationally, Jean’s story continues to be shared. On September 10, the second season of the cable channel Investigation Discovery’s Impact of Murder series kicked off with a two-hour premiere called “The Ballad of Botham Jean.”

And yet perhaps the clearest sign of Jean’s lasting impact on Dallas can be found on a wall just a few blocks from the apartment where he lived — and, eventually, lost — his life.

A new mural located at the intersection of Cadiz and S. Lamar.

On the anniversary of Jean’s death, the Dallas muralist Ponchaveli painted a mural of Jean on the north-facing wall of the Scotts Discount Liquor store located at the intersection of Cadiz Street and South Lamar Street. Known for his work featuring other Texas icons across the city, this latest piece depicts an angelic Jean (complete with a halo over his head) standing alongside a set of street signs foretelling the liquor store’s future address along Botham Jean Boulevard.

Notably, the piece replaces a previous Ponchaveli mural featuring the victim of another Dallas murder that the city has yet to move past: John F. Kennedy.

Asked about the new mural shortly after its painting, a clerk inside of Scotts recalled how Jean would cheerfully shop inside of the store. While pleased with the way the piece turned out, the clerk sighed before saying how much he’d greatly prefer not having to memorialize Jean at all.

No, it shouldn’t have been this way.