10 Things The Biden/Trump Duplex In Dallas Could Use. 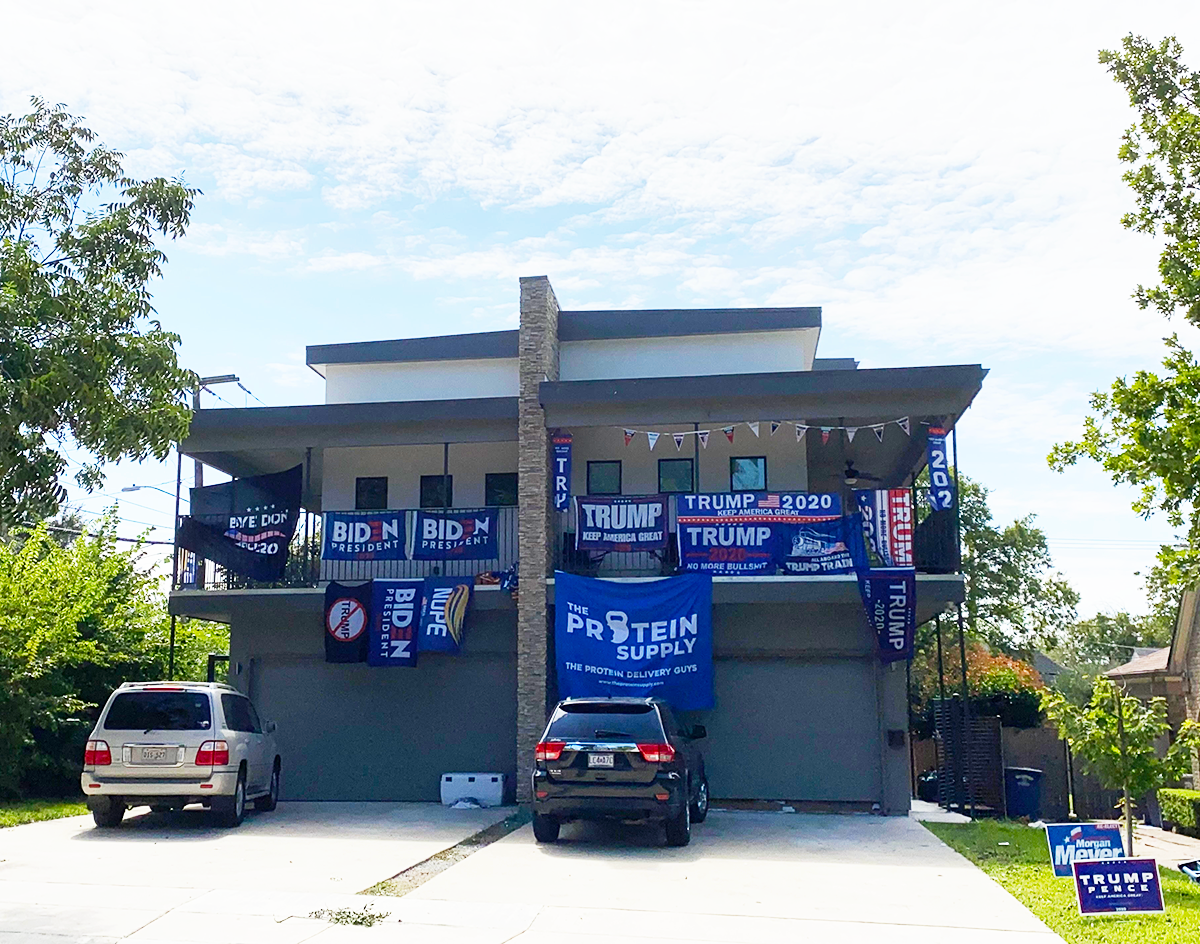 This Dallas Duplex Is Going Viral For Its Increasingly Politically Decorated Balconies — And We’ve Got Some Ideas For How To Spruce Them Up.

We might be a nation divided, but a pair of Lower Greenville neighbors are literally divided — in more ways than one. Or it’s all just a running bit between a few college kids.

Either way, the dueling duplex at the corner of Anita Street and Greenville Avenue, which has now garnered virality and attention from local news all the way up to The Tonight Show with Jimmy Fallon, is covered in political messaging — one half of which supports the presidential candidacy of Vice President Joe Biden and and the other of which pledges fealty to incumbent President Donald Trump’s re-election campaign.

Because the universe has a keen sense of humor, the Biden supporters reside on the left half of the building and the Trump household sits on the right.

As the November 3 election drags closer, the neighbors’ balconies have become increasingly draped in flags and signs promoting their respective candidates’ presidential campaigns. Ever fans of capitalism, the Trump side has also recently taken advantage of the attention by adding a flag above its garage promoting a protein delivery company.

We at Central Track tried to get into contact with the residents to no avail. So, instead, we’re offering up some unsolicited decorative advice with five additions that each household should look into — because, listen, we have no choice but to laugh at the bullshit of 2020 being capped off with this inescapable election commentary.

Five Things The Biden Household Should Add To Their Collection. 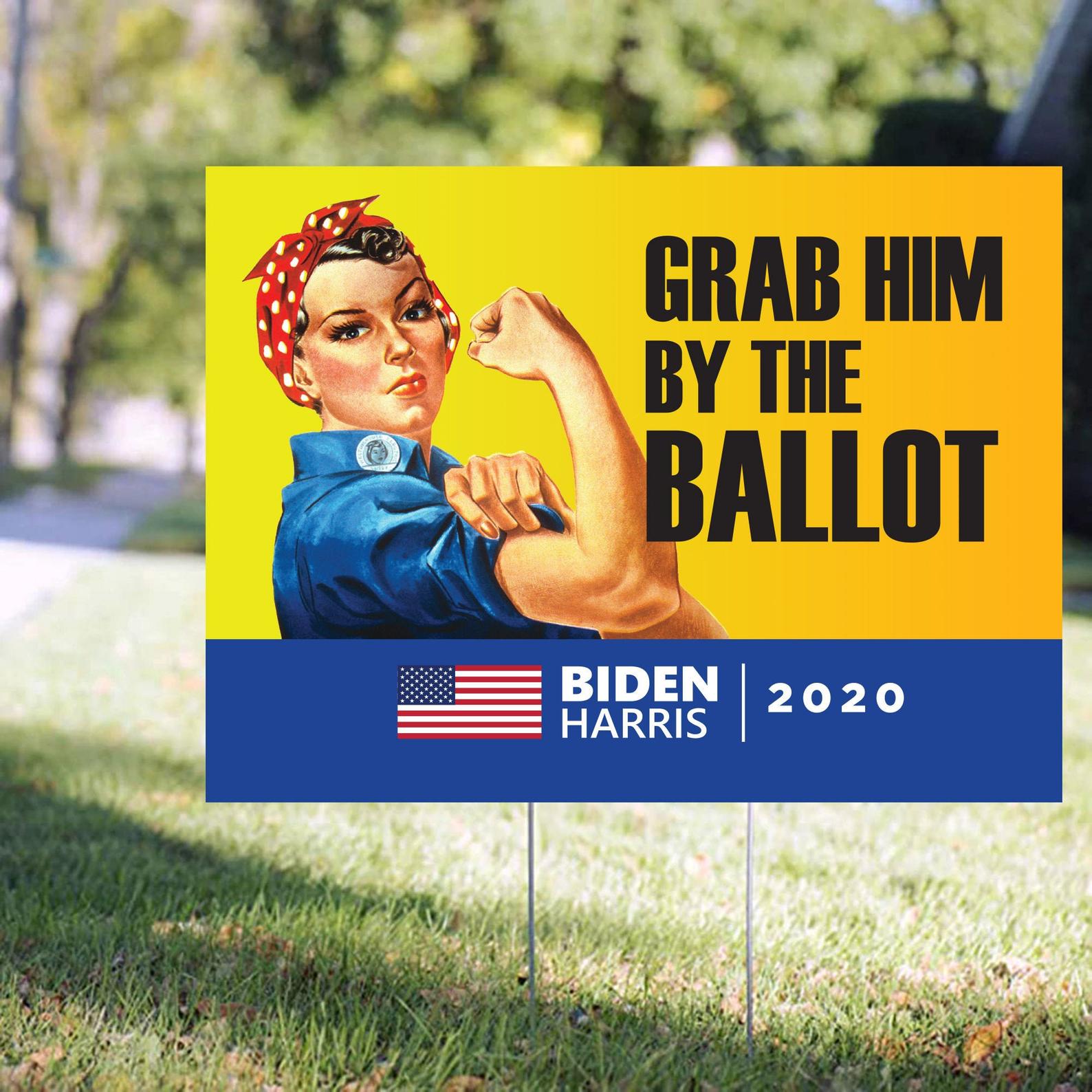 This nostalgia-inducing sign. If they want to embrace their inner neoliberal #Resistance Twitter personas, they could snag one of these Rosie the Riveter “Grab him by the ballot” Etsy signs. Get it? Because of the Access Hollywood tape heard ’round the world. 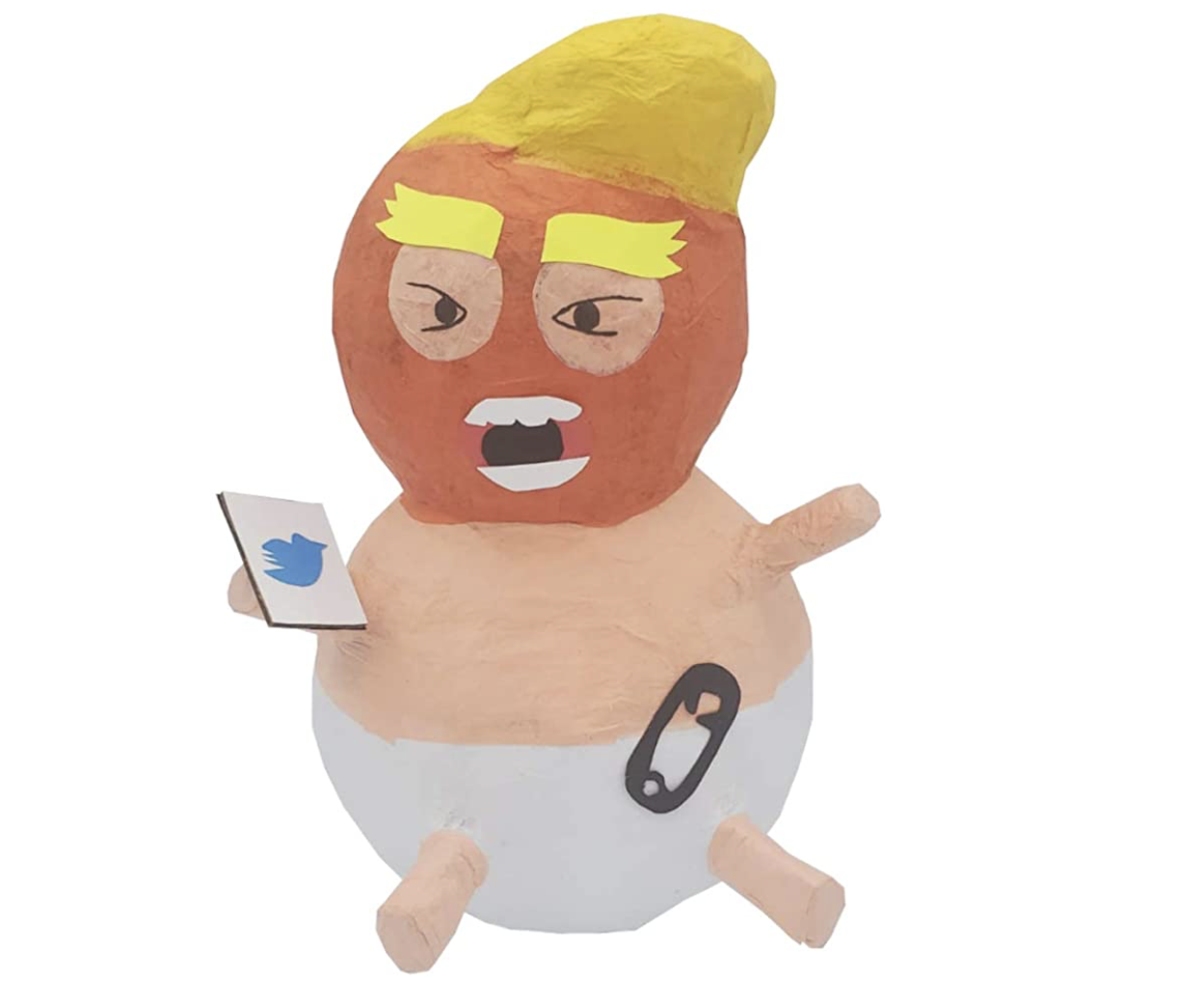 This piñata. They could also fill this overdone baby Trump piñata with bottles of synthetic urine, and order it through the U.S. Postal Service. 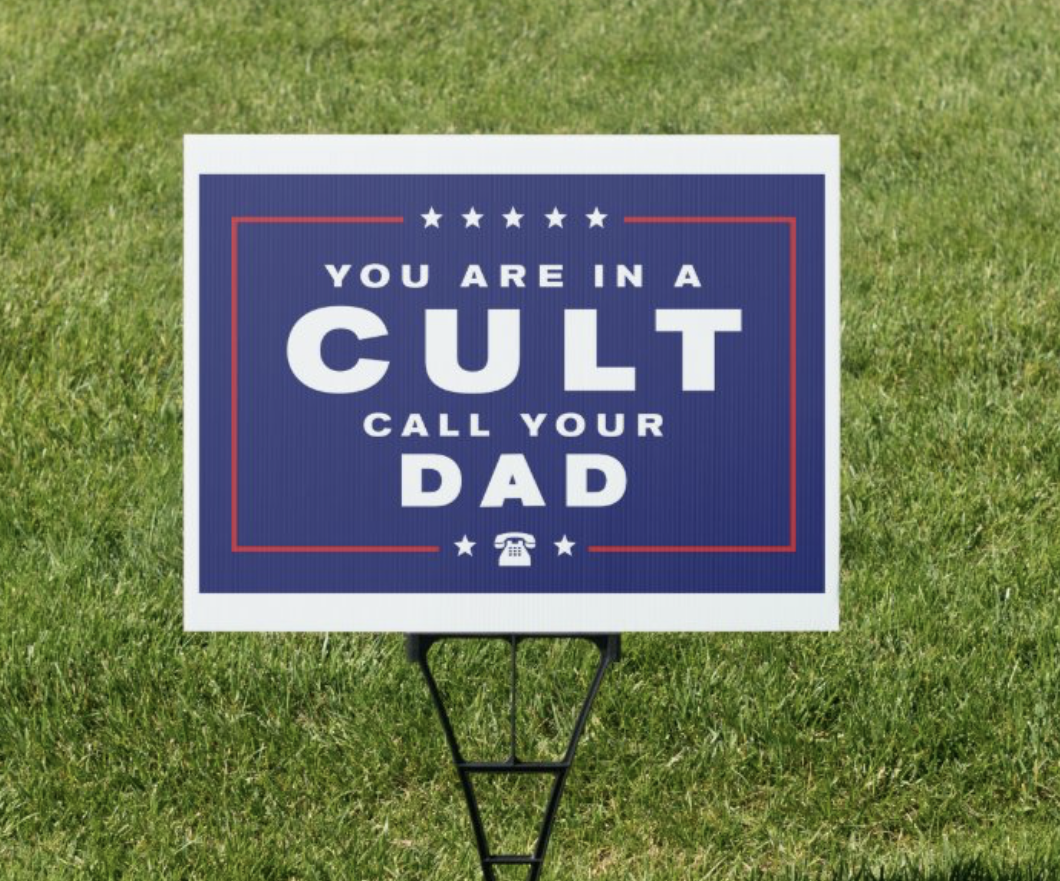 This sign aimed at your dad. This one speaks for itself. I mean, it is getting kind of weird, right? 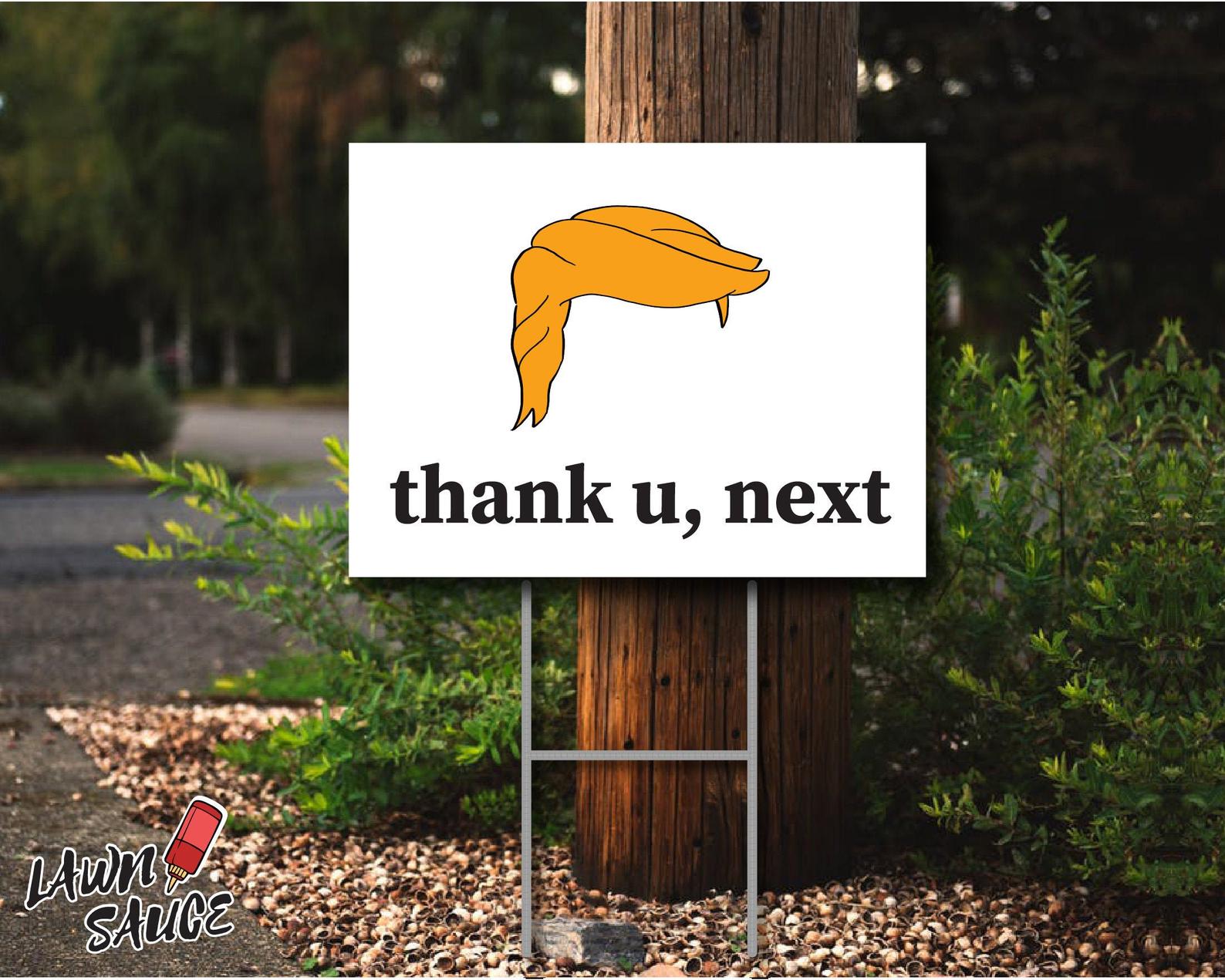 This cheeky sign. If there are any Ariana Grande stans in that house, they’re in luck! 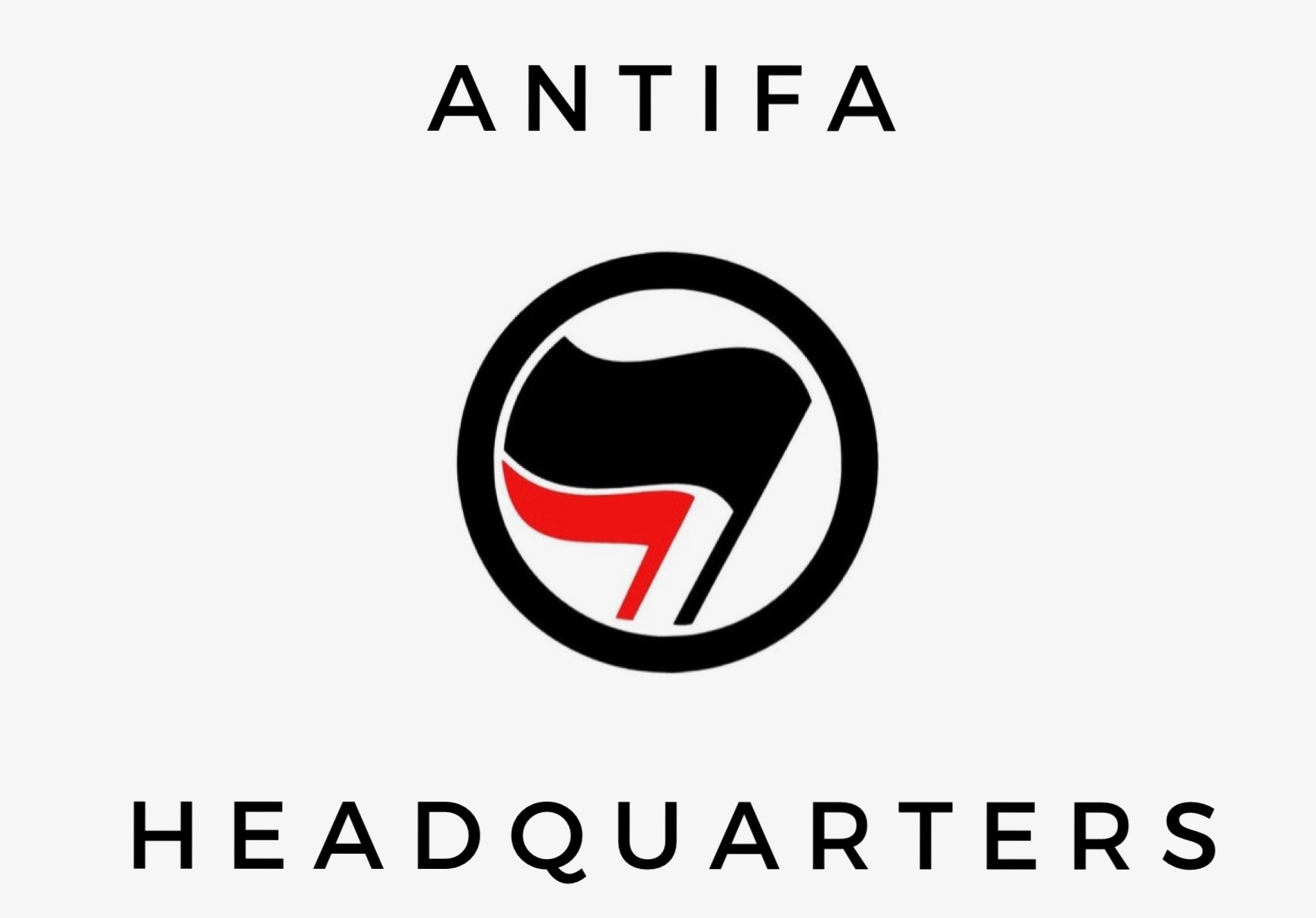 This flag. If they really want to send their neighbors into a QAnon head-spin, they should have this design-your-own Antifa Headquarters flag shipped overnight.

Five Things The Trump Household Should Add To Their Collection. 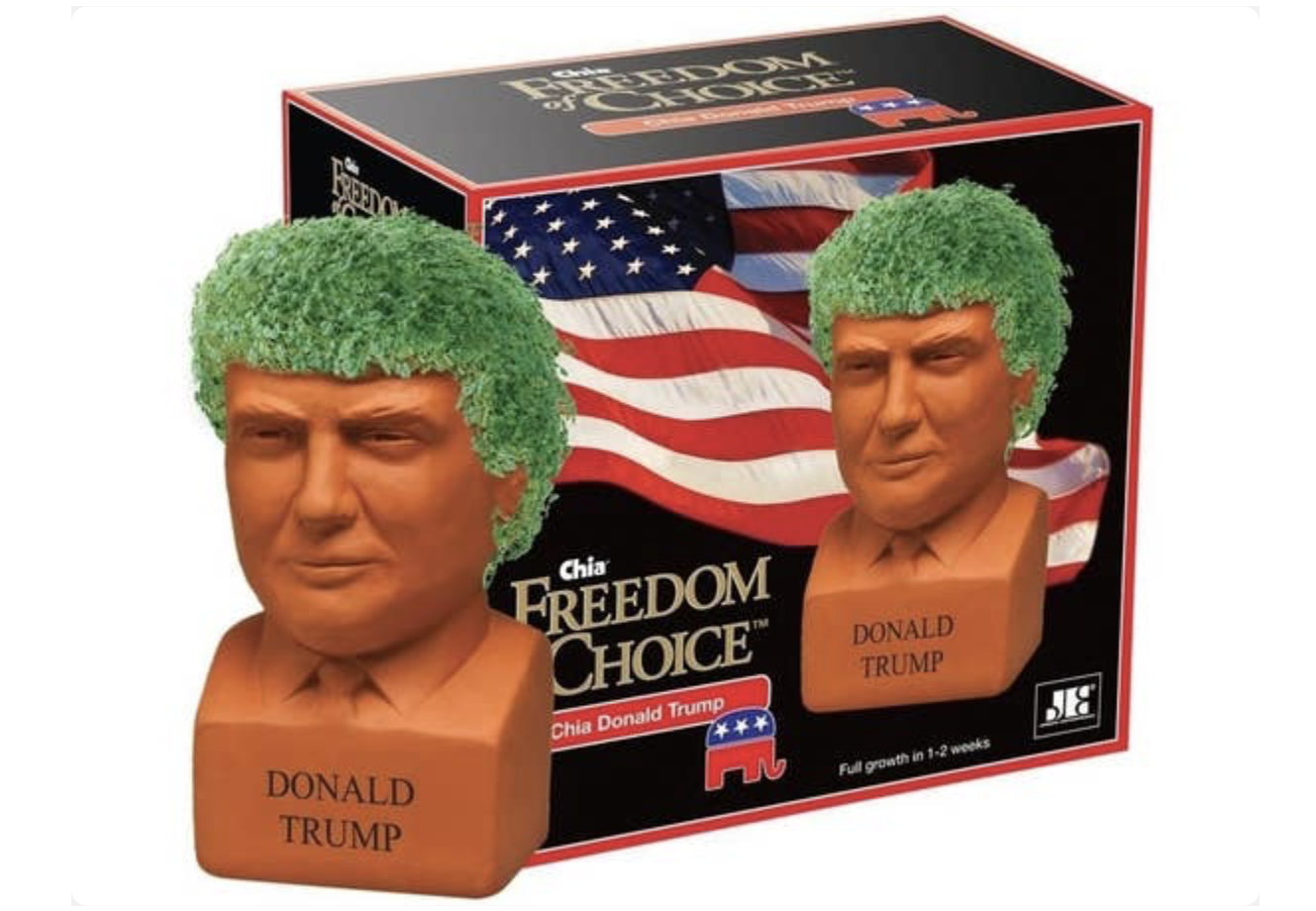 This $20 Trump Chia pet. It’s a lot more affordable than 70k in tax write-offs for haircare! 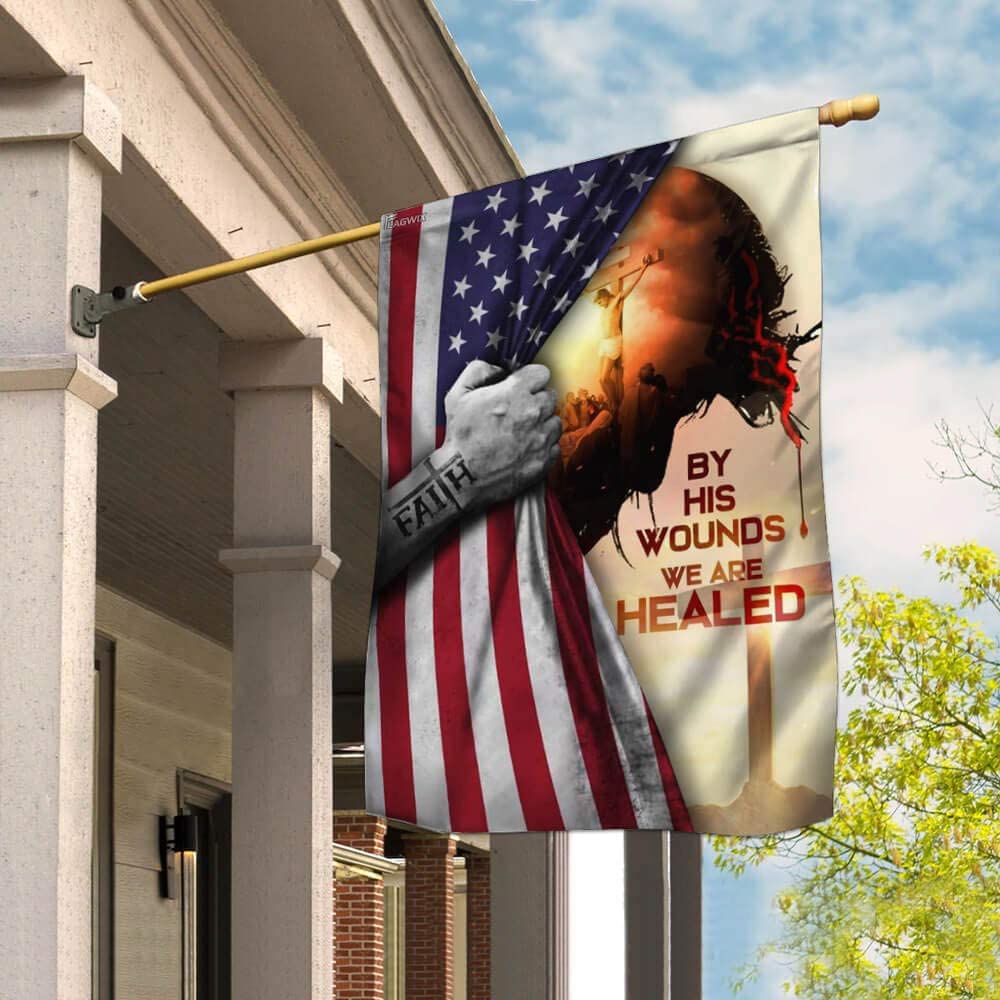 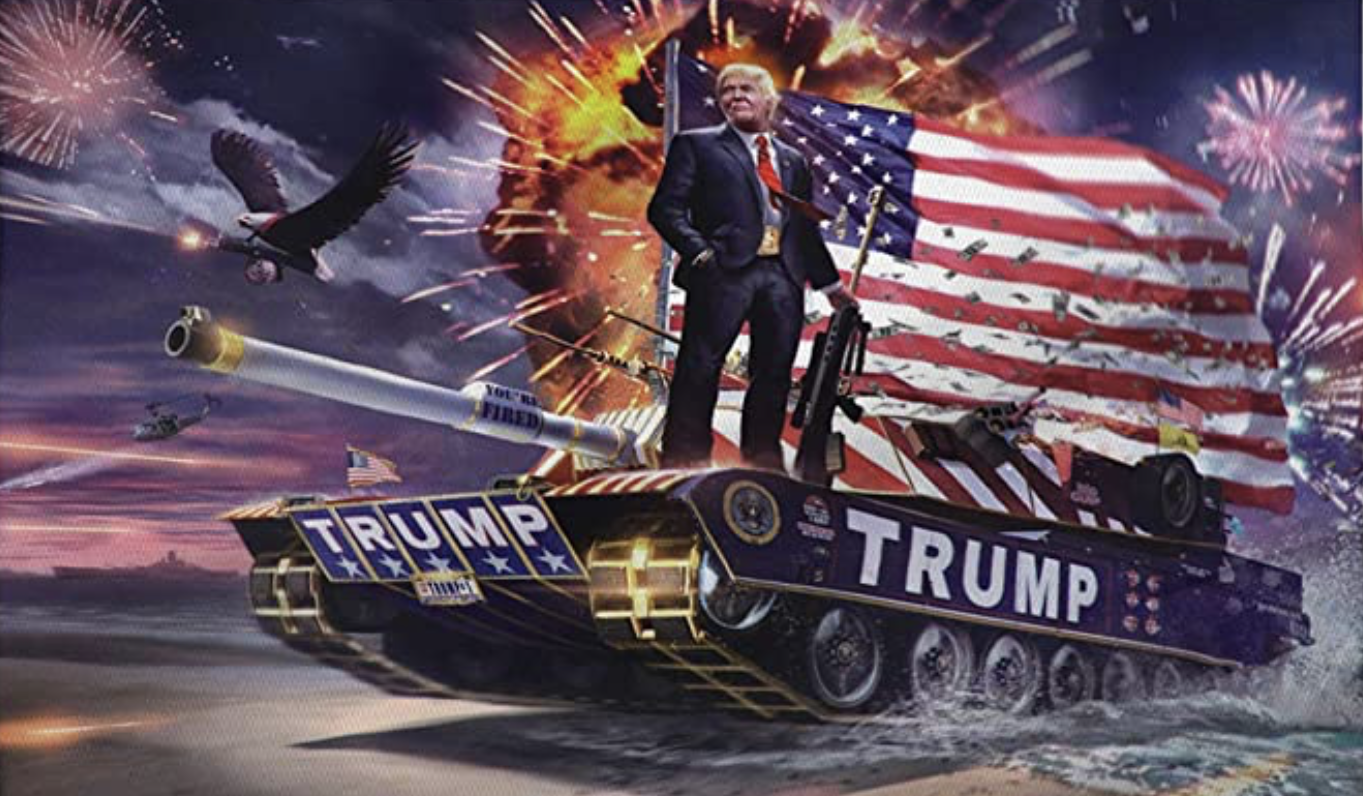 This right-popularized mural. We know Trump is a draft dodger, so what could he possibly be fighting on this flag? Scary, wind-powered socialist witchcraft? 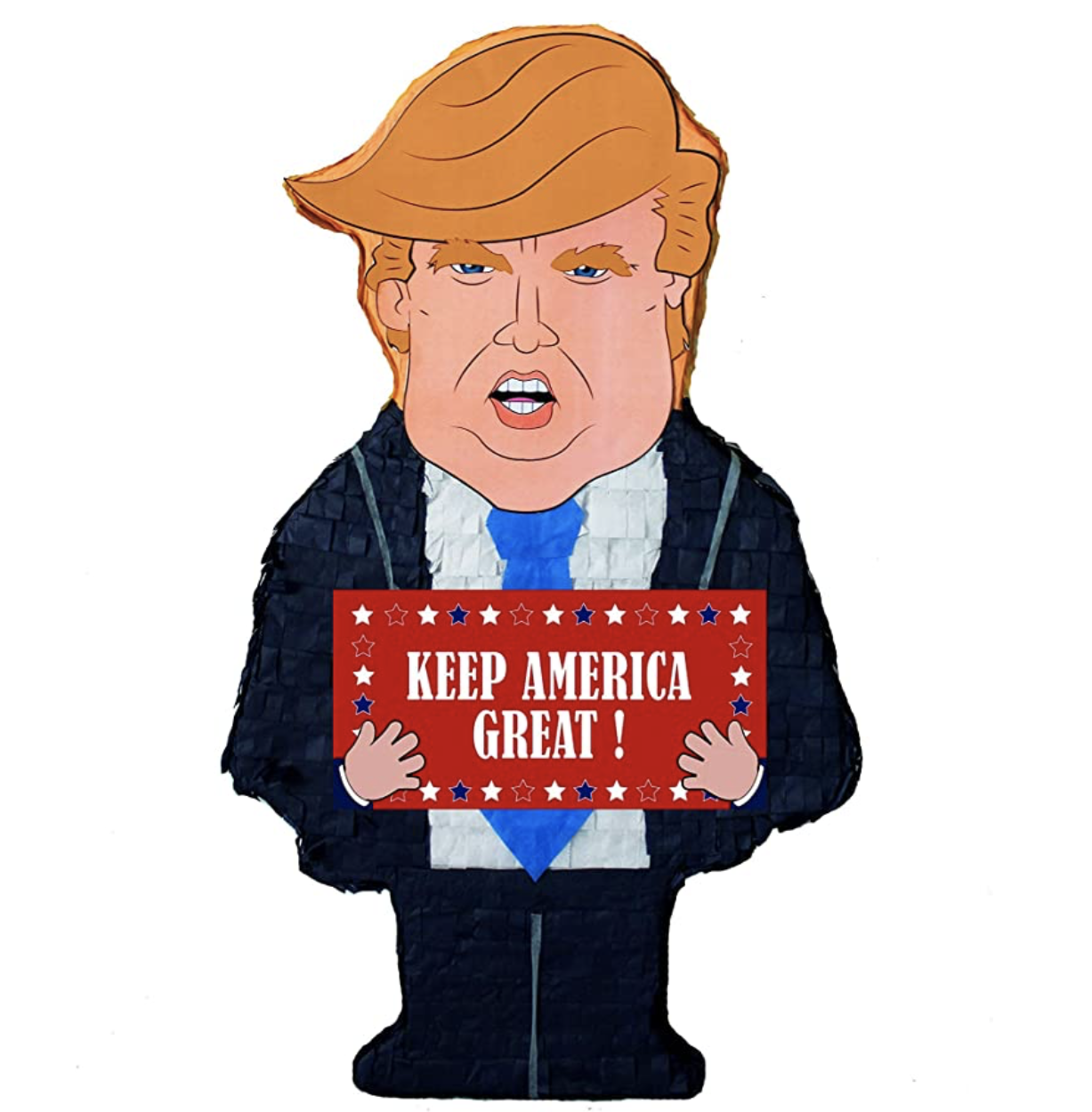 This piñata. The Biden household shouldn’t get to have all the piñata fun! Granted, we don’t know what they’d fill this one with. Maybe Hilary Clinton’s emails? The right is still stuck on that, right? 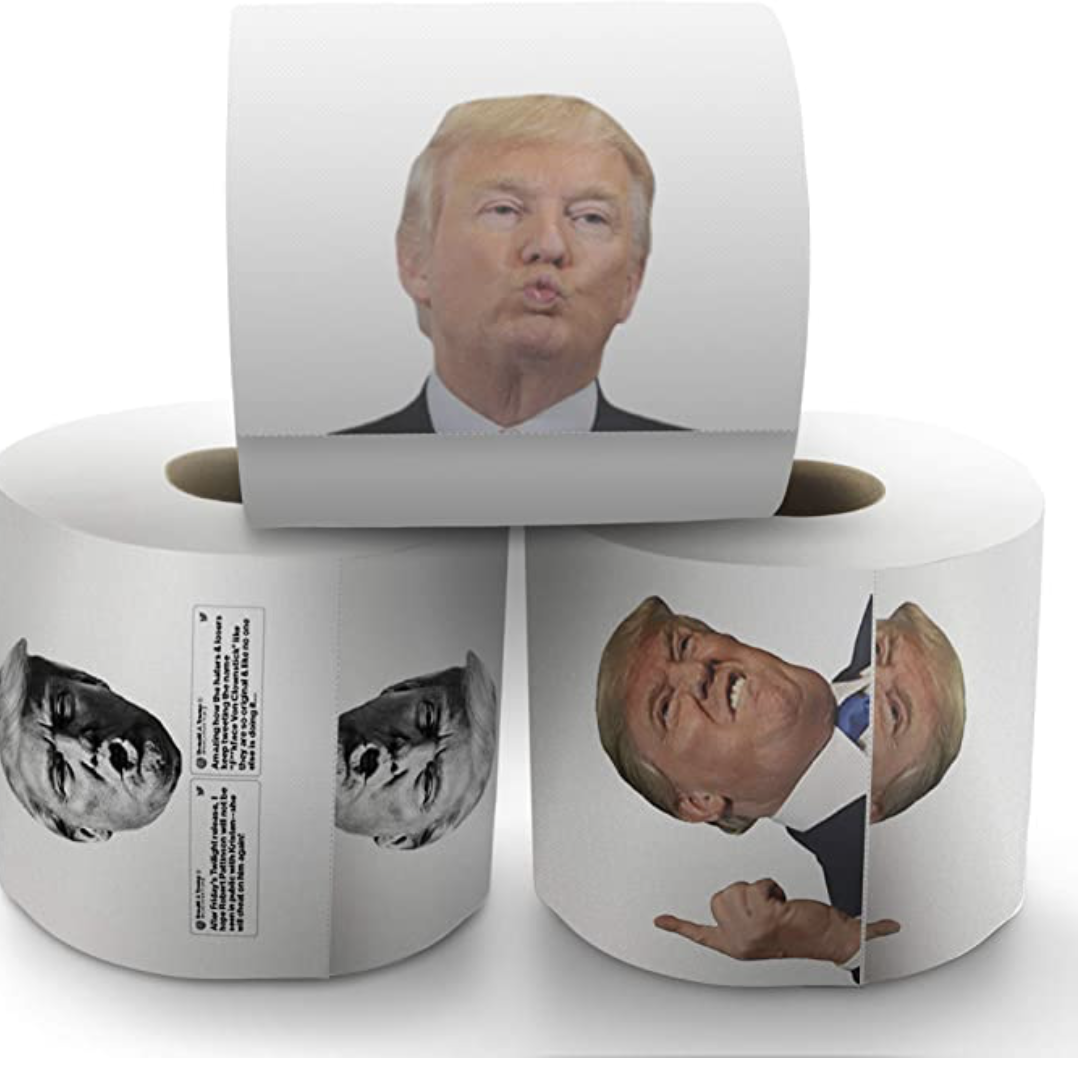 By the way, are you registered to vote? Remember: The deadline in Texas is October 5.