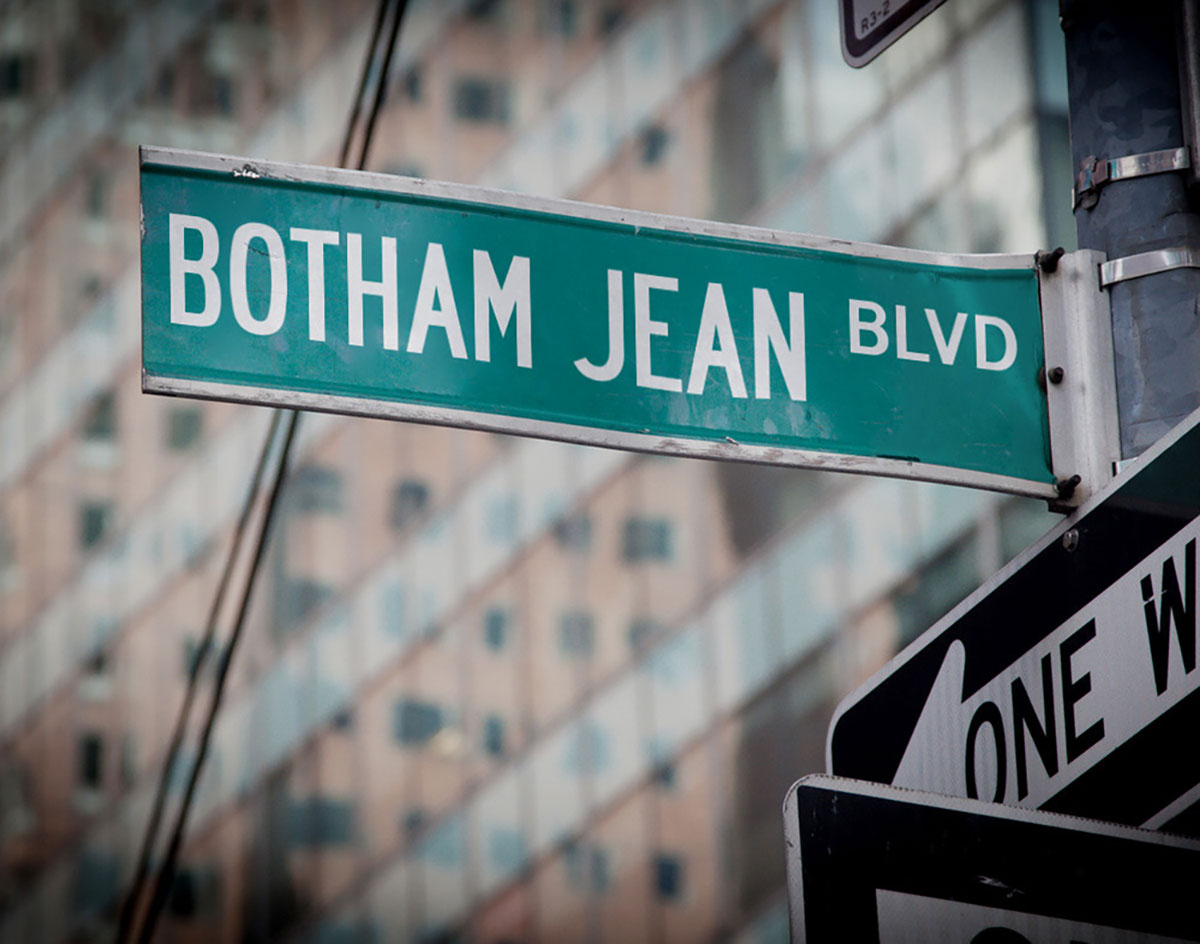 With Fellow Council Member Backing, Mayor Pro Tem Adam Medrano Has Filed A Memo To Rename A Three-Mile Stretch Of Lamar Street For The Cop-Slain Dallasite.

Members of Dallas City Council are moving to rename a three-mile stretch of Lamar Street as Botham Jean Boulevard.

The portion of Lamar Street that they hope to rename will run from the street’s intersection with Interstate 30 to its intersection with South Central Expressway — a stretch that runs through Districts 2 and 7, which Medrano and Bazaldua respectively represent.

Notably, this stretch of Lamar being proposed for renaming includes the addresses of both the Dallas Police Department’s Jack Evans Police Headquarters and the South Side Flats apartment building where off-duty Dallas police officer Amber Guyger killed Jean in 2018 after having allegedly mistaken his apartment for her own.

The stretch of Lamar that runs through Downtown Dallas just north of I-30 will remain unchained under Medrano’s proposal. 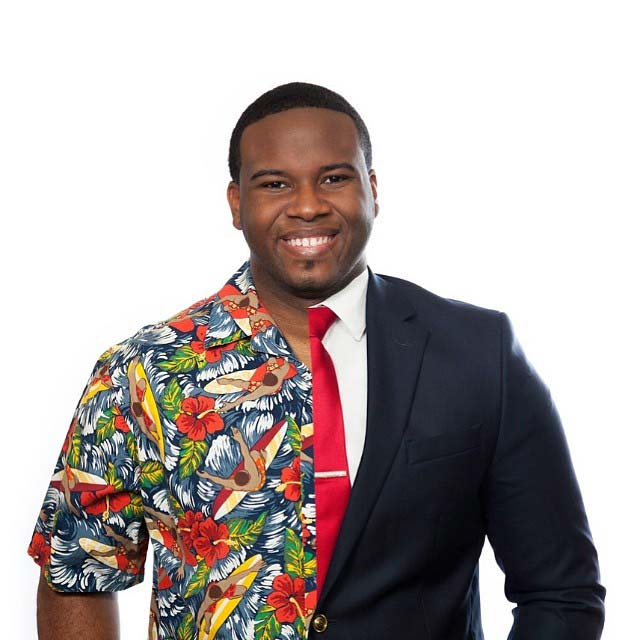 Bothan Jean was 26 years old when off-duty (now-former) DPD officer Amber Guyger shot and killed him in his own apartment.

The murder of the 26-year-old Jean — a well-liked song leader at Dallas West Church of Christ and a respected colleague as an accountant at PricewaterhouseCoopers — sparked outrage across the city. That anger only intensified among some in October 2019, when Guyger was given what many believed to be preferential treatment and a light 10-year sentence after having been found guilty of the murder by a jury.

Chris Norman of Dallas was among of those infuriated by that verdict. In June, during a meeting about possibly renaming Lamar Street, he shared his experience: “I was like, ‘There has to be something done. What can I do to honor this brother?’ Now, nothing that I can do is going to bring him back. But I figured it could be at least a symbol to honor him. It could bring some small bit of joy to his family, to see his name on a street sign.”

With his wife’s encouragement, Norman started a petition to rename Lamar Street to Botham Jean Boulevard. At press time, the petition has more than 55,000 signatures.

“I knew that we, as the City of Dallas, owed the Jean family more than a 10-year prison sentence — which we all know that means more like five to seven years,” he explained at the name-change proposal meeting.

Norman says he originally wanted to change the street’s name mostly because South Side Flats and DPD HQ are located on Lamar Street.

“At the time,” he says, “I wasn’t even aware of who Lamar Street was even named after.”

He soon learned that Lamar Street is named for Mirabeau Lamar, the Republic of Texas’ second president. Texas Monthly published a piece about Lamar’s problematic legacy in 2015. Some of its highlights:

After the formation of the Botham Jean Memorial Committee, Yafeuh and Peters took over for Norman. They aimed to see the entire length of Lamar Street renamed, and approached Medrano about supporting their cause.

“There has been sort of debate on the length of the street,” Balogun says. “The committee wants North and South Lamar — the whole street. Medrano feels it safe to avoid conflict with the business on North Lamar [over possible objections due to address change costs]”

Still, Balogun says, the important thing is to immortalize Jean: “I definitely see Botham Jean as a martyr of the Black Lives Matter movement, an individual that has given his life to expose contradictions that exist… in the police department, as well as the courts.”

Just two months ago, an alumnus of Jean’s alma mater at Harding University petitioned to rename the school’s auditorium after Botham Jean. (The auditorium is currently named for a university president who opposed segregation. The university rejected the petition.)

Medrano has has some successful history with renaming landmarks around Dallas. In 2019, he led the charge to rename a stretch of Olive Street near the American Airlines Center as Nowtizki Way for Dallas Mavericks legend Dirk Nowitzki. In 2018, he was involved in the push to change the name of the Pike Park Recreation Center to the Santos Rodriguez Recreation Center. (Read the story of 12-year-old Rodriguez’s police murder here.)

Medrano says he decided to proceed with his Botham Jean Boulevard proposal after speaking with Jean’s family to ensure their support.

While Bazaldua says he expects pushback from the Dallas Police Association on the proposal, Medrano says the area’s major property owners are aware of the memo and that the Black Police Association is drafting a letter of support.

In his street-renaming filing memo, Medrano says that renaming the street after Jean will “show the citizens of Dallas thathis death was not in vain and show the world that his life mattered.”

A photo of the memo — showing it as received — follows. 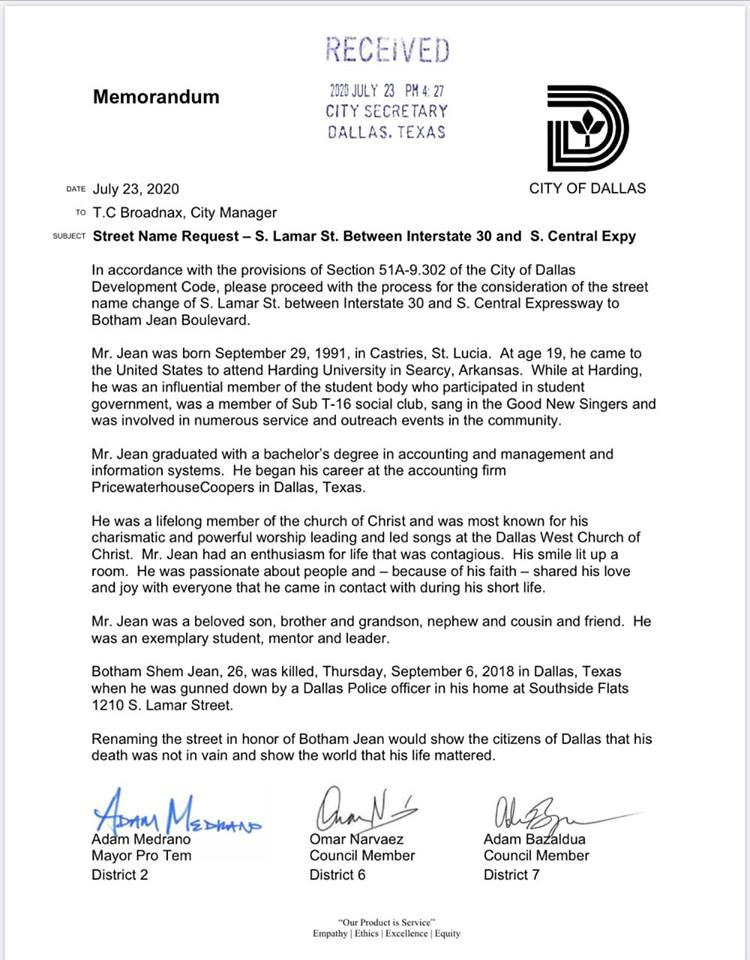