Dallas Board Murals To Be Preserved With New Exhibit. 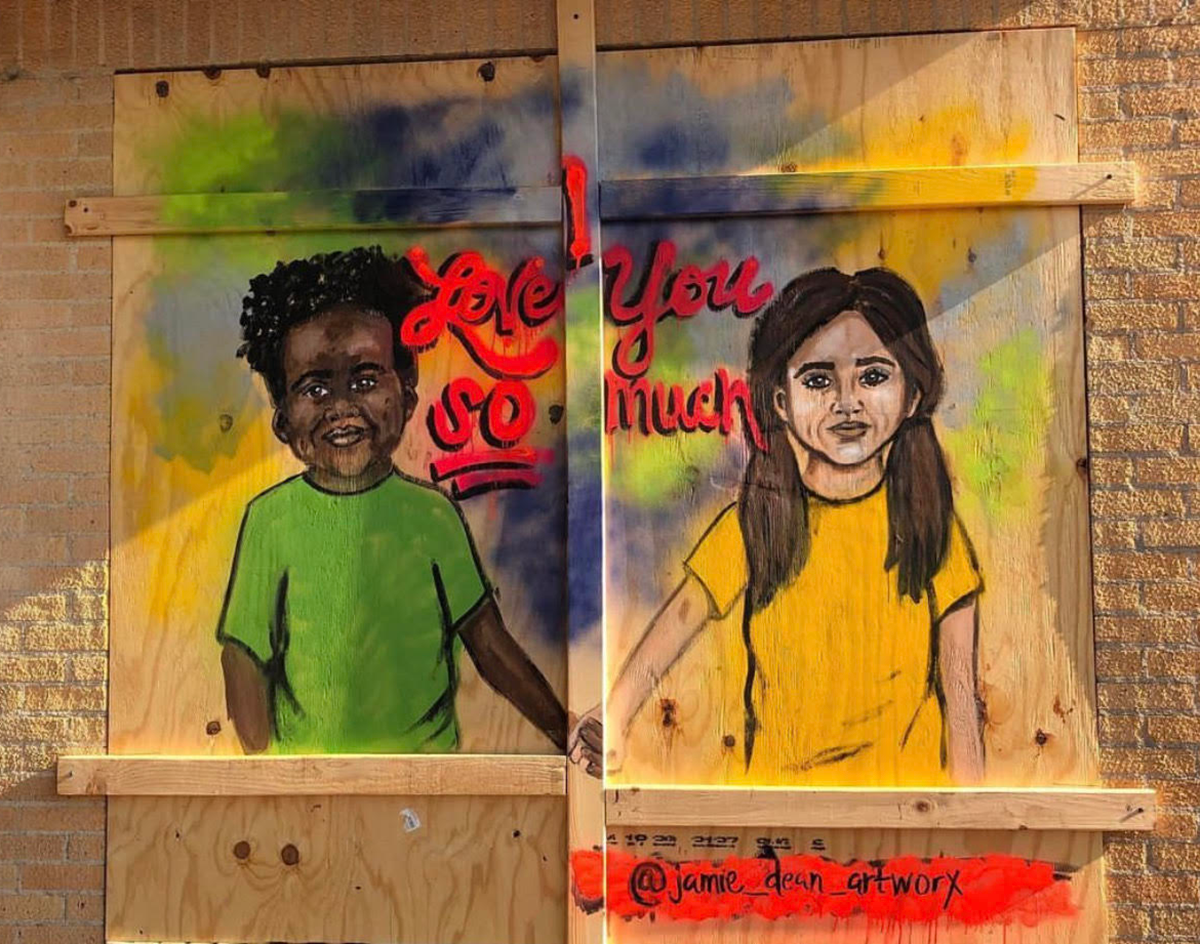 More Than 50 Murals Have Splashed Onto Boarded Up Storefronts All Over Dallas In The Wake Of COVID-19 And Ongoing Protests. Now They’re Being Preserved.

A series of murals coat the boarded windows of closed businesses in Deep Ellum.

On a boarded door on Main Street, a mural of a green and yellow tree trunk with leafless branches reaches out to the words “Say Their Names,” while several names of Black lives that have been cut short by police brutality are painted along the trunk and the bottom of the board.

Another mural of a dark blue sky and tall black buildings reads “Hope Lives” around a yellow and red haze. These are just some of the many murals that decorate Dallas right now.

Along with Deep Ellum 100 — a new organization that aims to provide financial assistance to Deep Ellum-based recipients — a group of visual artists calling themselves the Dallas Army of Artists is working to preserve the murals inspired by this defining moment in our history.

For months, these works have served as reminders of unity and solidarity, while others were meant to fill color into a neighborhood that was full of life not long ago.

An exhibit of some of these works of art will take place from Thursday, September 17, through Saturday, October 17, at Deep Ellum Art Co. This “Beyond The Streets” showcase will include around 25 of the best murals, along with interviews featuring each of the artists.

In March, when Dallas initiated the shelter-in-place and business-closing orders due to COVID-19, Deep Ellum businesses began to close their doors and board up windows with no purview for when they could reopen. Before we knew it, the lively entertainment district that made up so much of a thriving arts and culture scene was now barren.

Almost immediately, several Dallas artists started coming down and using the boards as canvases, trying to lift the spirit of the community with murals.

“It was unlike anything I’ve seen as far as public art in Dallas happening on impulse and being part of the moment,” says Isaac “Izk” Davies, a visual artist and the founder of Dallas Army of Artists.

Davies is the artist behind many murals outside Deep Ellum hot-spots, including Deep Ellum Brewing Co., Braindead Brewing and Deep Ellum Bark Park.

He says the artwork received a lot of positive reaction from the public, especially when considering some of the artists had never even painted a mural before. The process happened organically, and then later became something bigger after a series of protests broke out nationwide, including in and around Dallas.

At the end of May, Deep Ellum was hit by looters after a spark of Black Lives Matter protests filled the streets of the city, catalyzed by the death of George Floyd, a black Minneapolis man who was killed by police. Businesses that didn’t initially board their windows up, including Murray Street Coffee, Sneaker Politics and The Point Skate Shop, were left with broken windows by the end of the first night of protests.

Some people anticipated looting would continue, thus leading to more businesses boarding windows in preparation. Instead, they were left in awe for different reasons.

“What was really amazing on that Saturday morning, following the first protest, was we had families and people come from all over Dallas to help businesses and people here and clean up.” Gianna Madrini, co-founder of Deep Ellum 100, says. “That was really a powerful moment, too, when people came to our aid without even asking.”

The damages left in Deep Ellum gave artists even more reason to continue painting and eventually several were claiming walls for their artwork. Davies created Dallas Army of Artists as a Facebook group for artists and business owners. Its goal was to bring 100 dedicated mural, street and graffiti artists to contribute to the city to spark conversations about racial inequality and create art for the public and businesses during the tough times. The page also provides an organized channel for artists to communicate and make arrangements with business owners who have room for murals around their buildings. Davies also created a map marking every mural in the city that is part of the project.

By the first week of June, several artists had stroked their brushes around Dallas. Dallas Art Therapy, an organization that provides counseling and art therapy services, brought about 30 artists to Deep Ellum on June 5 and the following weekend. The group alone painted 20 murals, while Dallas Army of Artists painted an additional 15 murals by the end of the following week.

Fortunately, many businesses have now been able to reopen doors in some capacity, which means many of the boards have come down, but Deep Ellum 100 and Dallas Army of Artists want the community to be able to enjoy them longer.

“In the meantime, we want to continue to highlight what happened, what is currently happening with Black Lives Matter and also continue to keep the Deep Ellum name out there,” Madrini says. “This is such a historic neighborhood.”