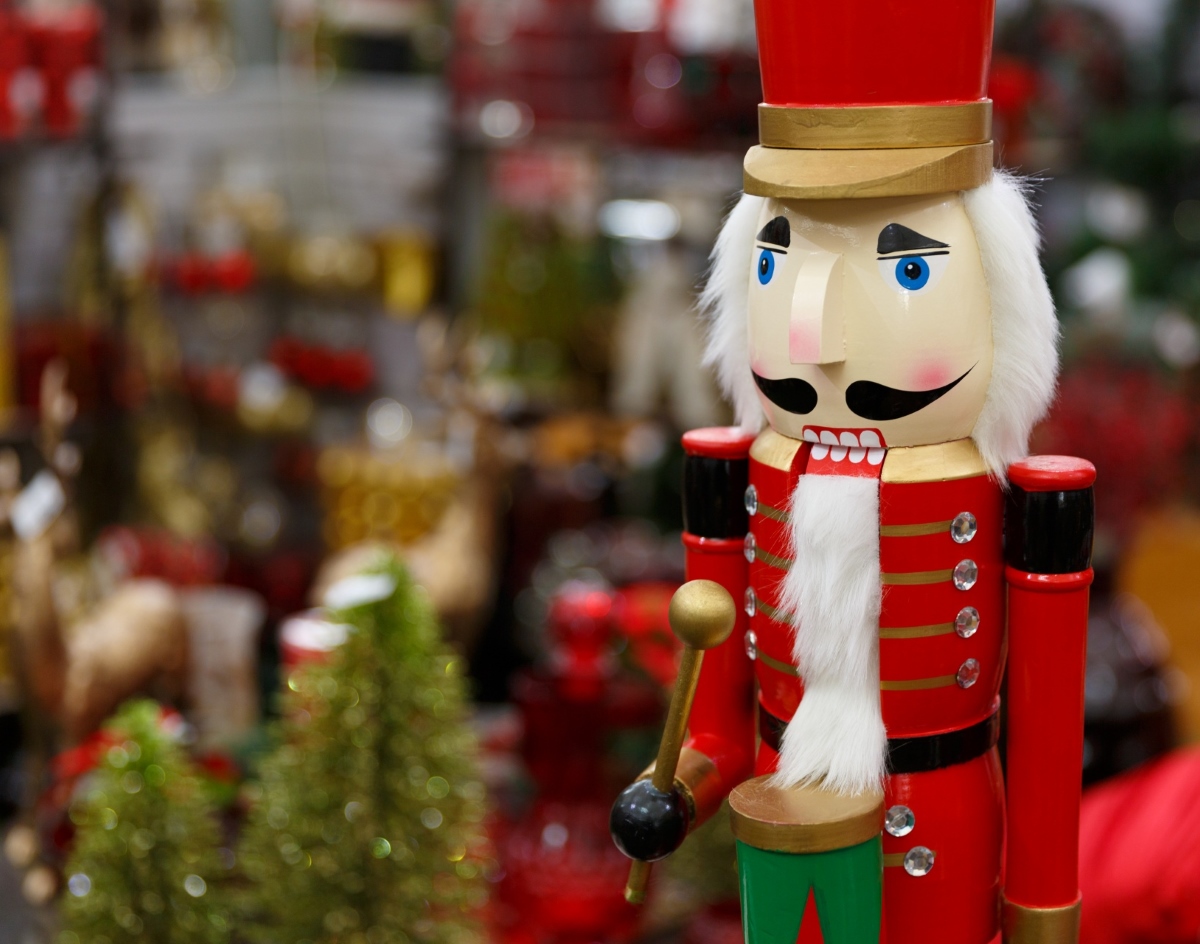 Something fun to do this time of year is re-watching holiday classics like Home Alone, and its sequel, which notably features our once and future king. Something you shouldn’t do, no matter how inspired you feel after watching Kevin McCallister take down the baddies is trying those same boobie traps IRL.

For some safer bets on how to have fun and not die this weekend, why not try some of the following out instead? — Cory Graves

Dark Rooms Farewell at Dada
Dark Rooms is leaving Dallas for L.A. But first, the hometown heroes will head a lineup of Blue the Misfit, Sam Lao and Picnictyme – maybe for the last time?! — OM

Game Grumps Live at The Bomb Factory (Sold Out)
Be a part of a live recording of the Game Grumps web series as Dan and Arin stop in Dallas to play some video games. — OM

Wreck the Halls at Dark Hour Haunted House
For those sick of staying off the naughty list – or of the 24/7 holiday music stations – there’s Christmas at a haunted house, complete with Krampus, eggnog and corn candy. Well, maybe skip the corn candy. — OM

SIMS at Three Links
Hopefully Doomtree member SIMS closes out the year in style by showing off a new track or two from his upcoming solo album More Than Ever that’s set to hit the market in January. Air Credits opens. — OM

Ian Moore at Poor David’s Pub
The Austin singer-songwriter closes out his 2016 touring year with an acoustic holiday performance in Dallas. Lucky us. — OM

Randy Rogers at Billy Bob’s
Randy Rogers Band’s 2016 was marked by the release of Watch This, his second collaborative LP with frequent touring buddy Wade Bowen. He’ll fly solo here, with no one to hold his beer while you watch him do this, and he’ll do it all over again tomorrow, too. — OM

Ruthie Foster, Charlie Belle at Kessler Theater
The Texas native won the 2016 Koko Taylor Award for Best Traditional Female Artist by the Blues Foundation. She stops in Dallas with Charlie Belle, a brother-sister duo that made waves last year. — OM

25th Anniversary Party at Lizard Lounge
Get down with no delay, as Beastie Boys DJ Mix Master Mike cuts faster, holding down the 1s and 2s at this big anniversary blowout for the Camila Vargas cartel’s home base. Cause nobody can do it like Mix Master can. — CG

Holiday Trading Post Pop-up Market at 400 South Hall Street
Featured vendors like Shinola, Hari Mari, Shannon Brewing Co. and several other trendy brands will be on site. Also, organizers say, a few “special” guests. Considering those organizers include the Warstic bat guys, and their company is co-owned by some cool celebs, there’s some interesting potential there for sure. — OM

The Roast of Jerry Jones at Dallas Comedy House
The DCH continues its series of roasting fictional characters by roasting a real person who only happens to act like a cartoon most of the time. — CG

Kixpo: Coats, Cans & Kicks Charity Event at Epocha
Many of this weekend’s events involve charity and looking out for those in need – and here’s another one. ‘Tis the season, and all that. As the name implies, they’ll be collecting canned goods, coats and shoes for those less fortunate. — CG
Santa Cause Pub Crawl on West 7th (Fort Worth)
Participating in this crawl will be a whopping 15 bars, which will explain all the drunks stumbling around in Santa suits this Saturday. — CG

Joe Gorgeous, Siamese, Tele Novella at Shipping & Receiving
Theatrical glam rock, macabre pop rock and some good timin’ post-grunge all on one bill. And we’re not saying which is which, because you really gotta see all these. — CG

Locked & Loaded: Moving Panoramas at Armoury, D.E. (Free)
The fast-rising Austin-based trio is playing in Dallas for free. The group didn’t follow up 2016 with new music, but it did a wide-ranging national tour that – let’s emphasize this again — stops in Dallas for free. Moon Waves and Native Fox open. — OM

Goodnight Ned, Whiskey Folk Ramblers, The Birds of Night, Jackie Darlene at Double Wide
Since releasing its so-called “fringe folk” debut back in 2012, Dallas’ Goodnight Ned has honed its chops with a hefty load of live gigs and refined its sound to include nods to The Band, The Rolling Stones and the fellow harmony-rich retro-rockers Dr. Dog. The band further expanded its sound with its sophomore LP and a couple of lineup shifts which have left them no less fun to catch in a live setting. — CG

Yule Ball at The Downtowner (Denton)
A Sadie Hawkins dance in the theme of the Hogwarts Yule Ball. Sounds magical! — CG

Onesie Party at Henderson Tap House
Eat brunch and drink all the alcohol in a onesie. Canned food, unwrapped toys and dog food are all acceptable contributions. Despite your footie PJs, you are an adult. — OM

Bicycle Toy Run for Vogel Alcove at Dallas Bike Works
Many of this weekend’s events involve charity and looking out for those in need – and here’s another one. ‘Tis the season, and all that. As the name implies, they’ll be collecting toys for those less fortunate, and then riding bicycles about it. — CG

Junior Brown at Granada Theater
An American original and Austin’s best-kept secret, Junior Brown should definitely be on your list of must-see acts in Texas. Tonight, Mr. Brown will serenade you with his savory country twang, dazzle you with his patented guit-steel prowess, and maybe even surprise you a bit with a song or two inspired by past trips to town. — Nicole Arnold

Mark Farina at It’ll Do Club
San Francisco house pioneer Mark Farina will drop by It’ll Do tonight, where he’ll drop a bunch of down-tempo dance numbers for a bunch of folks who’ve dropped whatever’s necessary to keep up with the Mushroom Jazz DJ. — CG

Holiday Trunk Show with Camille & Laura at The Wine Therapist
Handmade jewelry, pickled goods and other homemade and handcrafted goods, perfect for giving or receiving. Oh, and wine! — CG

North Texas Stands With Standing Rock at Lola’s Saloon
Luke McGlathery, Joe Savage, Vincent Neil Emerson and a dozen more performers will play this benefit, because the fight’s not truly over, just temporarily halted. Hit the link to see which supplies they’re looking for/what your $15 door donation is going towards. — CG

Wax at Trees
WAX is the totally cool guy the other rappers totally wanna be like. His Cookout Chronicles Tour also boasts performances from slighly less cool dudes The Palmer Squares, Tyler Sloan and Grades of Absolute Truth. Kidding. — CG

Frankie Valli & the Four Seasons at Winspear Opera House
Oh, what a night, the 17th of December in 2016. What a very special time for you, which you’ll later remember. What a night. — CG

Mele Kalikimaka Swizzle’s Holiday Pop-Up at Green Door Public House
Think it’s too cold for a luau in December? Wait a few minutes. That’s a joke we think is only about Texas, though they make it literally every place. — CG