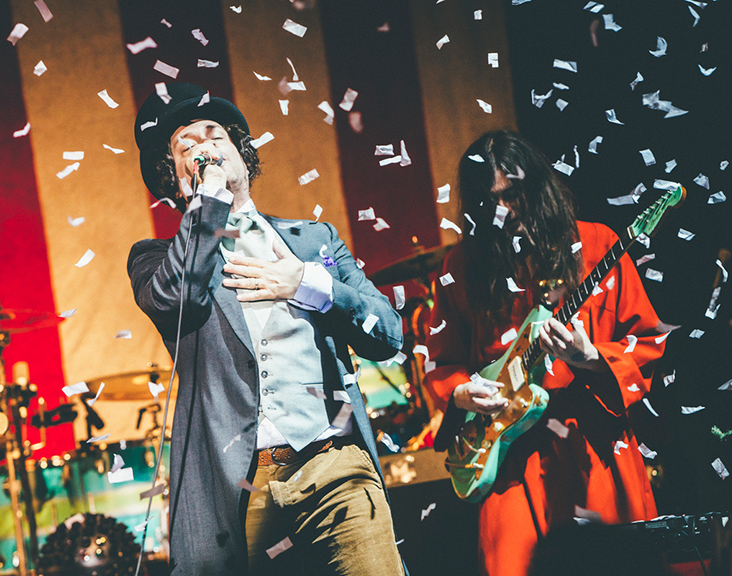 Go On A Holiday Spree.

Thanks to jellyfish and science, it’s now possible to make glow in the dark beer at home. As if homebrewing wasn’t difficult enough its own, this $199 yeast kit requires an additional, tedious 10-hour step that must be completed before the brewing process ever begins.

If it sounds like a lot of work, that’s because it is. Most things worth a damn are. Unless, that is you’re looking for something worth a damn to do this weekend. That’s totally easy. Just keep on scrolling, you. — Cory Graves

Jim Jefferies at Majestic Theatre
The Australian-born comic, who toured alongside Dave Chappelle as part of the Oddball comedy festival a few years back, will make a return trip to Dallas to riff on atheism, pandas and pedophiles, if his past work is any indication. It’ll damn sure be funny, though. We swear to god. — CG

Leonard Cohen Tribute: I’m Your Man at Texas Theatre
In a lengthy October interview with The New Yorker, the 82-year-old troubadour Leonard Cohen said, “I am ready to die. I hope it’s not too uncomfortable. That’s about it for me.” The interview was meant to promote Cohen’s October-released final album, You Made It Darker, the title track of which bears the chorus, “I’m ready my Lord.” Much like Bowie’s own final album earlier this year, Cohen died only three weeks after his final effort’s release. One of the top five most influential songwriters from the ‘60s moving forward, Cohen’s death was a big blow that was only softened somewhat by his old age and his Bowie-like acceptance of his own demise. And surely there’s some solace in knowing that his massive catalog of genius lyrics, poetry and songs will endure for decades to come, passed down from generation to generation through the thousands of times they’ve been covered. This concert film is just one example of that, finding acts like U2 and Nick Cave covering his tunes. And here’s some links to North Texans taking on his tunes. — CG

The Raven Charter Farewell Show at Trees
The Raven Charter isn’t long for this world. The band’s last-ever show is scheduled for Friday. “It’s been an awesome ride and we hope to return sometime down the road but for now this is farewell,” writes the band in an online message to its fans. “Thanks to everyone for all of the support over the past 11 years, it has certainly made this fulfilling. Let’s make this a good one!” In any case, this writer hopes the band will finally unscrub the internet of its long-gone “Thousand Worlds” video. — CG

CineWilde Presents: Auntie Mame 35 and Drag Show at Texas Theatre
This irreverent 1958 escapade is notable for its titular character, who has been called the mother figure every gay man wishes for. In addition to the screening, CineWilde will host a cocktail party and drag show at the theatre as well. — CG

12 Bars of Charity in Uptown
A bar crawl with a twist. Your donations will go to charity, and you’ll get access to drink deals and transportation between stops. Tis the season for both giving and receiving. — CG

Christmas Vacation at Alamo Drafthouse (Richardson)
Oh, fudge, the greatest Christmas movie of them all returns to the big screen. Did you hear that, Buddy the Elf? — CG

The Polyphonic Spree Holiday Extravaganza at Majestic Theatre
Spectacle has never been an issue for the Spree to begin with, but it’s even less of one at this recurring, exceedingly family-friendly bash, where Tim DeLaughter and his merry pranksters cobble together any and all at least somewhat cheerful elements they can muster and present them alongside two performances of their own — one holiday-themed, one more traditionally rock-oriented. — Pete Freedman

DecemBeard 2016 at Shipping & Receiving Bar
A holiday beard and mustache competition/concert benefiting Wise Hope Shelter and Crisis Center. Unlike that kid in the mall, they’ll know if that shit is fake. — CG

David Ramirez: Bootleg Tour (Live Album Recording) at Dan’s Silverleaf
Don’t bother messing with shitty phone recordings of this one. Ramirez is recording all the shows on this tour. It’ll sound better than your stuff, I promise. — CG

Naughty or Nice Bar Crawl on Greenville Avenue
This thing starts at Blind Butcher before marching up and down Greenville to Libertine, the Bottle Shop, Dallas Beer Kitchen and ending at Haymaker. At each stop there’ll be a naughty and nice drink special, too. Ho, ho, ho. — CG

Elm Street Tattoo Christmas Party at Curtain Club
It’s the 20th year and counting for this fancy dress party in the name of charity. And you know they know how to throw a party. — CG

Claptone at It’ll Do Club
Unlike most masked DJs — and don’t they all seem to be these days? — pics of Claptone sans his dazzling gold mask have yet to leak online. The house DJ spins in New East Elm if you want to sneak a peek with your own eyes. — CG

DAMN XXI at RBC
Damn, Dallas, back at it again with another ambient music night. This one features Future Museums among other audio and visual performances. — CG

#GirlBoss Pop-Up Shop at GRIT Fitness
Taking cues from Nasty Gal HBIC Sophia Amoruso, the Design District location of the fitness chain will host a slew of vendors, each of them female-owned. — CG

Dolly Parton at WinStar World Casino and Resort (Sold Out)
Here she comes again, and there you go on over the border again. Don’t gamble on any tickets being available at the door, though, because there won’t be. — CG

Andrea Bocelli at American Airlines Center
Please, Dallas: Don’t be the one city where some jackass yells, “Boats and hoes!” should Bocelli perform “Por Ti Volare” tonight. That really wouldn’t be cool. Plus, it’s such a damn beautiful song to begin with. — CG

Locked & Loaded at Armoury, D.E. (Free)
The best free shows of the week always seem to happen at the Armoury. Iill, The Bristol Hills and Felt & Fur makeup this bill, which only helps prove our point. — CG

Bruce Robison and Kelly Willis’ Holiday Shindig at Kessler Theater (Two Shows)
We wonder how long ago these married country performers got tired of being called things like “adorable” and/or “sweethearts.” Their relationship status aside, these two are pretty qualified songwriters in their own right, penning hits for acts like The Dixie Chicks over the years, as well as a 2006 Christmas album that they’ll be drawing heavily upon during a pair of shows at the Kessler this evening. — CG

Giraffage at Lizard Lounge
Giraffage produces music much in the vein of Flying Lotus or Four Tet; his music is super sample-happy and wide-ranging. His palette features all 31 flavors, not to mention abrupt time signature changes that have no qualms with slapping the listener upside the head. There’s certainly no shortage of beastly beat drops or bone rattling bass, either. — Travis Lilley

Joe Bonamassa at Verizon Theatre
One of the most successful contemporary blues noodlers alive is in town to noodle on the blues in front of quite a large amount of people. — CG

Turnpike Troubadours at Billy Bob’s
Finally, some virtuosic Red Dirt musicians that aren’t all in-your-face about it — or the fact that they wear pearl snaps, drink beer and frequently operate farm equipment. Needless to say, their songs are better for it. — CG

Grits & Biscuits at House of Blues
E.Z.Mo Breezy brings this Dirty South party back home to the Dirty South. — CG

The Outfit, TX’s Players Ball 2 at Dada
For the second time now, The Outfit, Crit Life and Flexaveli bring their big party to Deep Ellum, where TOTX recently headlined to a packed crowd at last weekend’s DOMA showcase. A portion of the $10 door will be donated to the North Texas Food Bank. — CG

BMW Dallas Marathon
The annual Dallas Marathon — formerly the White Rock Marathon — is a Top 10 U.S. marathon, and serves as a Boston Marathon qualifier. We reckon if you’re running the thing, you’ve probably had this date circled for several months now. The rest of you, though, might want to avoid, well, most of East Dallas like the plague today. — CG

CRX at Trees
Earlier this summer, The Strokes proved themselves plenty capable of causing a stir, releasing the surprise Future Present Past EP in June and headlining The Governors Ball that same week like a bunch of badasses. Of course, over the years, the guys in the band have shown themselves as perennially buzzworthy subjects whether performing separately or together — that is, except for guitarist Nick Valensi, who has until this fall remained content to sit on the sidelines while the rest of his mates toured with side projects like The Voids, Little Joy and The Albert Hammonds. But with some encouragement from Queens of the Stone Age’s Josh Homme, Valensi hit the studio this year, recording his recently released debut as CRX. Initially intended to be a heavy sort of thing, Homme steered him in a direction somewhere nearer to the realm of The Strokes, with some heavy flourishes and dance-pop elements sprinkled in for flavor. And now here they are. For more info on this one, check out our interview with Valensi here. — CG

Andie Case at Dada
The Seattle-based YouTube star does her thing offline, live in person in the 3-D world. Kirk Thurmond opens. — CG

Gremlins at Texas Theatre
Whatever you do, don’t get them wet. And then stick around for a behind-the-screen rock show with sets from Born Snapped, Soy Babies, Sexual Jeremy and SSTD. — CG

Lil Durk at The Green Elephant
For someone whose rap career has only spanned the course of a few years and who has been in and out of jail for the majority of it, Lil Durk isn’t doing too bad for himself. The 24-year-old is signed to Def Jam, has beaten a few legal cases and headlines a Dallas club for at least the third (fourth? more?) time in recent years. If that doesn’t scream street cred, we don’t know what does. — Porttia Portis

Lord of the Rings Trilogy Marathon at Alamo Drafthouse (Cedars)
One screening to rule them all! But not only are all three LOTR flicks screening back-to-back-to-back here, they’re showing the special extended cuts, which boast a collective runtime of 726 minutes. That’s 12 hours and 6 minutes, my preciouses! — CG

Animals as Leaders at Gas Monkey Bar N’ Grill
Prog metal: for those that like things that are not just loud, but also complex. Dualing distorted guitar licks? You got it, dude. — CG