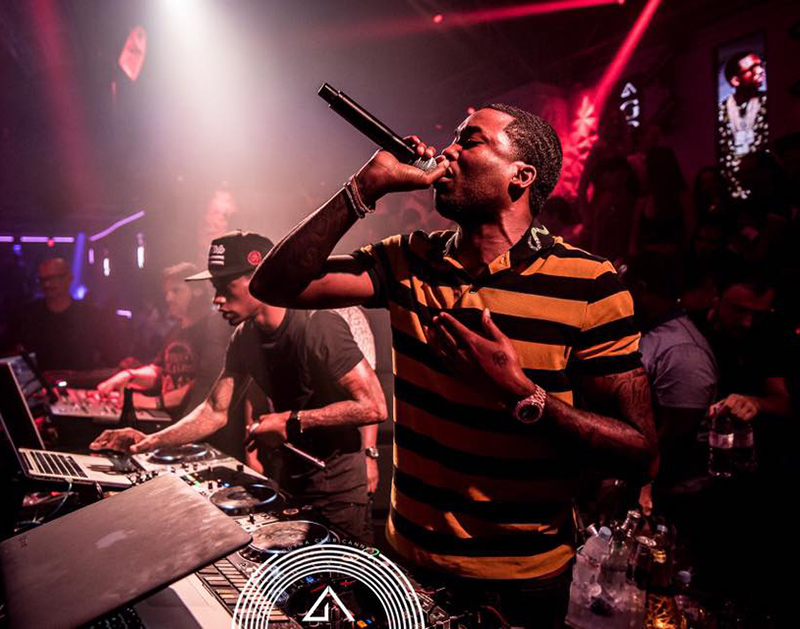 Win With Meek Mill At South Side Ballroom, Sing Along With The Stars Of “Nashville” and 50 Other Things To Do This Weekend.

We’ve all had our accounts of road rage every once in a while, and we all deal with it differently.

And apparently, so do massive-sized squirrels. If you think your road rage is crazy, check out these two large marmots squaring up in the middle of the road in the town of Haixi Mongol in China earlier this month. We don’t know what went down before these two tussled, but they sure caused an interesting scene — and traffic — along the side of the highway.

But you can cope with your road rage a little differently by heading out to one or two of the many events we have in store for you. Have a safe drive home, folks, and enjoy the weekend. — Pauline Esguerra

Electric Football World Championships at The Westin DFW
The world’s favorite football game comes to Dallas. Meet your match as you play against some of the best Electric Footballers in the world. — PE

Sheri Shepherd at Arlington Improv
You might’ve seen Sheri alongside Whoopi Goldberg on The View or on the silver screen with Kevin Hart in Ride Along 2. Turns out she’s got her own take on good humor. Bust out some late night laughs. — PE

Stars of “Nashville” Tour at Verizon Theatre
The stars of the hit TV show get to a singin’. — PE

Silas Nello Album Release Listening Party at Spinster Records
This heart-throb has a vinyl of his own. Beef up your record collection with some good folk rock tunes with a little alt country vibes. — PE

Vans Warped Tour at Starplex Pavilion
“Hanging our behind the club on the weekend. Acting stupid, getting drunk with my best friends. I couldn’t wait for the summer and the Warped Tour. I remember it’s the first time that I saw her there.”— Obed Manuel

Mark Chestnutt at Billy Bob’s
Country music with some soulful vibes to tug at those heart strings. — PE

Michelle Branch at Kessler Theatre
Walk fast and make your way downtown, well, to the Kessler. Michelle’s got what you need to start your weekend off right. — PE

A Midsummers Soiree at Crown Plaza Galleria
Dress your best and bust out your best one-on-one moves. You might want to watch some tutorials on how to tango before, though. Or you can just dance alone.— PE

August Alsina at House of Blues
New Orleans based recording artist gearing up some of his best tracks for those Friday night vibes. — PE

IMomSoHard Tour at Majestic Theatre
Everybody and their mom will be there, so you should go too. These two ladies get you and your problems—it’s a girls night for all of you. — PE

DJ Jazzy Jeff at It’ll Do Club
The Fresh Prince won’t be there as his hype man, but at least his ’90s Bel-Air beats will be. — PE

A Life In Waves at Texas Theatre
Documentary all about electronic music legend and connoisseur, Suzanne Ciani. — PE

Gucci Mane at Gas Monkey Live
Celebrating the release of Droptopwop and his new single “Fetish” with Selena Gomez, join the rapper as he takes the stage in his first tour in a long time. — PE

Texas Queerlesque Festival: Welcome to Unicorn School at Sue Ellens
The $35 cover charge gets you into six fun-filled, high-energy classes like you’ve never had in your life. Celebrate the LGBQT+ community and burlesque dancing all in one night. — PE

Cure for Paranoia, Sandovall, Thaddeus Ford Band, and DJ Frances Jaye at Three Links
Nothing like starting off the weekend with local hip-hop and soul. — PE

Nickelback at Starplex Pavilion
What’s not to like? Everyone’s absolute favorite Canadian rock band is hitting up Dallas on tour. — AC

Slightly Stoopid at The Bomb Factory
As long as we’re feeling closer to the sun, might as well listen to the track “Closer to the Sun.” — AC

King George at Granada Theater
This George Strait tribute band will be giving it all they’ve got tonight. — AC

Rock Against Alzheimer’s at Trees
The third annual rock charity extravaganza gives all proceeds to the Alzheimer’s Association in their ongoing fight against the disease. Inexplicably, Dallas’ Star Wars 501st legion will be there, making this one of the few times you can obsess over stormtrooper armor and listen to metal somewhere other than your parent’s basement. — AC

Punk Rock Karaoke DFW at Three Links
You’ve been practicing in your car and shower long enough. Time to bust out those bagpipes and let loose in front of an audience. — AC

Oak Highlands Brewery Beer Brunch at Sundown at Granada
Mimosas get all attention when it comes to brunch. Well, set aside that fruity concoction for something yeasty and delicious to start your Saturday morning off right. — AC

Crown the Empire at The Dirty 30 [SOLD OUT]
Sorry to leave you with only memories of a broken heart, but this sucker is out of tickets. — AC

Mur with Sister at Sundown at Granada
Avant-garde drone sludge oozes across the stage.— AC

Ohio Players at The Door
A quintessential funk band with grooves strong enough to set you on fire. — AC

Idina Menzel at Verizon Theatre
You’ve heard Elsa’s voice in the movie Frozen. Sing along to some Frozen hits and some of her own original melodic broadway tunes. — PE

Strangelove at House of Blues
California-based Depeche Mode tribute band has their own signature vintage electronica sound that resonates with your ’80s persona. They’ll be joined by INXS tribute band INTXS. Get it? — PE

Styx, REO Speedwagon at Starplex Pavilion
Rock on with these legendary groups. — OM

Vesperteen at Curtain Club
Your favorite hipster band busting out some new tunes on their TOGETHER FOR THE SUMMER national tour. — PE

Meek Mill at South Side Ballroom
Team Drake or Team Meek? Either way you can still vibe out to the head honcho of the Dreamchasers. — PE

Froggy Fresh at Club Dada
Do you think he doesn’t get girls because he’s not very tall? — OM

Lowrider Expo at Fair Park
An event for all those who like to scrape those plates. Check out some of the sickest low riders in town. Hydraulics or bust. — PE

Sunday Funday at Panther Island Pavilion
Make some fun out of your Sunday with some water activities, summer food and brew. — PE

Balcones & Ironroot Whiskey Dinner at Rye Craft Food and Drink
For all you whiskey lovers out there, enjoy some drinks from your two Texas distilleries. — PE

School of Rock Continental Tour Finale at House of Blues
Your last chance to see some of the best young talent in rock ‘n roll. — PE

KNON’s 8th Annual Harmonica Blowout at Poor David’s Pub
Are you ready to be entertained with some fast-paced harmonica action? — OM

National IPA Day at On Rotation
Take that one friend of yours who says they “love” IPAs and put that claim to the test. — OM