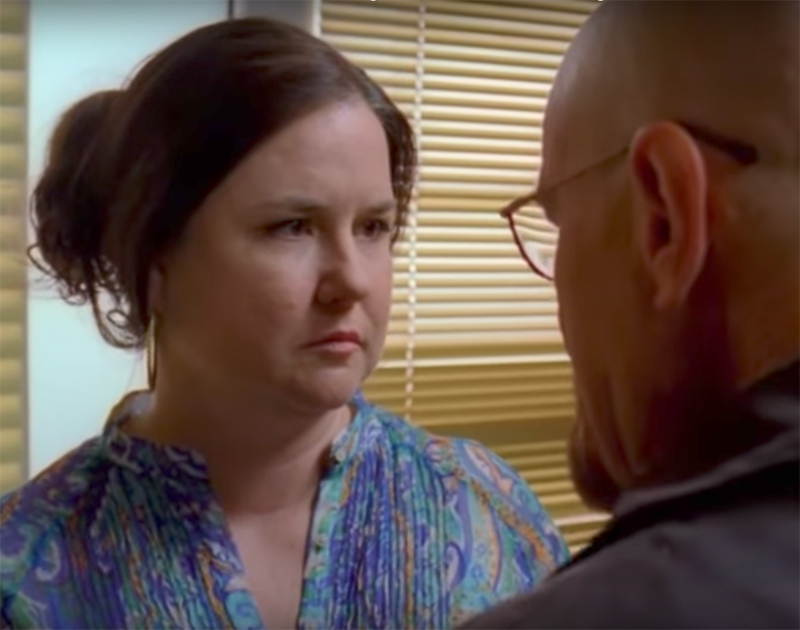 From Shredding Documents On Breaking Bad To Working At Kitchen Dog Theater In Dallas, Better Call Saul Cast Member Tina Parker Has A Lot On Her Plate.

Fans of Breaking Bad will probably remember Tina Parker’s performance as Francesca, one of the cavalcade of shady minor characters that Walter White encounters through Saul Goodman and his illicit law firm. Bigger fans of Breaking Bad that were drawn into its spin-off Better Call Saul, will absolutely recognize her as one of the characters resurrected for the prequel.

But if you’re into the Dallas theater scene, Tina Parker’s list of prior performances is much longer than her IMDB page. Not only has she appeared in TV shows like The Lone Ranger and Longmire, she has worked as an actor, director and designer with over 50 productions at the Kitchen Dog Theater since she became active in the Dallas-area company in 1993. And that doesn’t even include her work with Undermain Theater and Lonetower Theater, as well asher  numerous readings for the Arts and Letters Live series.

I’ve read that when you first auditioned for the part of Francesca on Breaking Bad that you didn’t think you were a good fit.
It’s true. I was put on tape for a local casting director that was helping cast the extra parts and when I got it, it read like a blonde big-boobed administrative assistant. And I’m not that. I’m a plus-sized lady. I was like, “I don’t know if this is me.” What do I have that’s in this character? So I just wore something that made me feel great. I had this cool rockabilly dress I felt great in and I wore that and just worked my natural sass.

It was funny because when I went in there were a lot of blonde, big-boobed ladies wearing business outfit and they all kind of looked at me like, “Well, you made a choice.” And I was like, it is what it is. If I get this, great. If I don’t… It just felt like her because the lines were so sassy.

I did it. I didn’t hear anything. But I felt good about the audition Then I get a call three or four hours before I’m supposed to get on a flight that I was cast. Good thing I didn’t have a play going on at the time.

Was your return for season 3 of Better Call Saul expected or did it come out of the blue?
They had done two seasons. When the show was announced people would ask, “Are you going to be back? You’re going to be back, right?” I really had no idea. I didn’t know and I don’t think they knew. From what I’ve read and from talking to Peter [Gould] and Vince [Gilligan] it was going to be a half-hour comedy when they first started, but it changed and it morphed when they got into the groove in the writer’s room and it became a whole different animal than what they expected when they first pitched it.

So they really had no idea when people from Breaking Bad would start showing up. I just knew that if it was right, they would bring me and if it wasn’t, they wouldn’t. I just knew that whenever they called I would be ready to go. If they wanted me to come and hold the door for [Bob Odenkirk] for one episode, I would come and do it.

So I got the call last July. I got an email saying it could happen. You have to sign a non-disclosure agreement, so I did that. I don’t think they knew how much they would use me even at the beginning. I didn’t even know what kind of vibe she would have, so when I got those first scenes I was like, “Wow, she’s totally different.” It’s great. She’s so nice and fun and so happy. Man, what happened to her? Something bad has happened to her by the time we meet her in Breaking Bad.

Did shifting gears with your character present any difficulties?
No and that’s because of the way it’s written. That’s the glory of good writing, man. You just look at it on the page. The main difference between film and theater is that everything is shot out of order, so you have to keep track of what’s happening with your person at any given time and what’s happening in the show. But the writing is so solid you just trust that and find the truth in that.

Because the scripts are so good the actors are from the top down like, “Let’s get these lines right.” When you got something that good, why mess with it?

Tell me about working with Bob Odenkirk and what’s that like.
When I was first on Breaking Bad, I did dork out. He’s just a really amazing, kind person. He’s so smart and a voracious reader. He’s always reading hard cover books cover to cover. Crazy smart about politics and music. He loves vinyl. There’s always a record player in the make up trailer. Big fan of The Replacements and Sam Cooke — that’s a fun fact about Bob. He’s just a really cool dude. Private, definitely. So generous and great to work with on camera.

I hear the crew is notoriously hands-on. Tell me about that.
They’re hands-on in every department. For example, when I go into the costume room there’s a color palette that’s set for the season and only certain people are allowed in certain colors. And you can see that in Breaking Bad, too. You’ll see little details peppered in. I’ll have scenes where I have two lines and I’ll try on 12 outfits before they decide which one. That’s the great thing about my character this season. I get lots of prints and happiness and hearts and pinks and birds because of the vibe they’re creating for her.

Is it weird seeing all of these podcasts that go with every single show and rehash everything and micro-analyze every detail?
Theater’s not like that because you don’t see people breaking apart every choice you make. I’m just a minor part. I can’t imagine. In talking to Rhea [Seehorn], who plays Kim, she finally said she wasn’t going to look at this stuff because they’ll say things like, “You have a man voice,” or things like that. It’s easy to be cruel when you’re not looking people in the face. That’s the phenomenon of social media, right? Breaking everything down to the Nth degree.

I say the same thing about theater criticism. You take the good, you take the bad or maybe you don’t take any of it and just do the work. Do the work, feel good about the work and then it’s over. It’s hard, but sometimes that’s the best way to preserve your sanity.

Tell me about balancing all of your work with Kitchen Dog and working with TV and film.
One of the reasons I stayed in Dallas was to satisfy both passions. Theater is my first love, it always will be. I’m able to do exciting, challenging work in Dallas meanwhile being able to be put on tape for shows like Better Call Saul or indie movies or whatever because we’re in between where a lot of things are being shot.

We’ve got stuff in New Mexico, we’ve got stuff in Louisiana and right now Atlanta is like the third coast, really. So there’s a ton of stuff that myself and other actors are able to do to cobble together a living in Dallas.

It’s an interesting balance. I find I get a lot more done when I’m set because you look at your clock and it’s two hours before my call, two hours after my call and this is the time when I can get stuff done. You just have to get on it and get it done.  You don’t have the daily distraction of, like, hey, my toilet is broken or, “Hey, P.S., let me come and talk to you about X, Y and Z.”

There have been some pretty big changes at Kitchen Dog in the past year or so.
Oh god. Two years. It’s been like Mr. Toad’s Wild Ride, as I like to call it. We’ve been on the move. We’ve moved six times in the past two years. I joke now that we’re like expert movers, so that should be our fundraising device. “Do you need your office moved?” We’re really efficient at loading a U-Haul now.

That’s been hard on us as a company. You never really can anticipate the kind of impact it has on ticket sales and momentum. It’s been hard. I totally empathize with groups that don’t have a home base because it’s hard to build an audience.

But you did find a new base of operations.
I forgot to mention. Even though we had Mr. Toad’s Wild Ride of temporary venues, during those two years we bought a building, which is crazy. We got a building over in the northern design district, kind of tucked back behind the Cidercade. It’s a 10,000 square foot warehouse that we’re in the process of raising money to renovate. We’ll start renovating when we have 75 percent of the money raised. It’s a $2 to $3 million campaign. Not just to renovate the building but to create the infrastructure and give some attention to keep the building running. Hopefully we’ll be able to just be in that building.

When you walk into this place, since it was a tile warehouse and showroom, you can already see the bones. You can see this is where the lobby and the offices will go. This would be where we’d have a rehearsal/cabaret space would go, and here’s where we’d have the theater and the shop. So it’s cool in that respect. You don’t have to use your imagination. It’s not a tear-it-down-to-the-ground situation.

What else makes it difficult to build and maintain an audience locally?
These days media coverage has shrunk so dramatically. We’re not only moving six times, but if you’re lucky, there are one or two stories. People won’t even know where you are. They go and drive by and see it’s torn down and go, “Oh, you’re closed.” No, we’re not closed! We’re open for business. We just happen to be here or there or maybe downtown.

You can blast it as much as you want on Facebook, but we’re in a dire situation as far as Dallas is concerned. There’s not enough coverage of the arts. We want a city of the arts, but where’s the coverage? There’s more than just downtown.

Especially how self-conscious Dallas has been about its arts in the past. It desperately wants to have a high arts reputation and it has been that way for decades and decades.
Yeah, if we want to be the next Chicago, we got to get the word out and get audiences where they crave that kind of material. They want to be cutting edge. They want to be on the forefront. Otherwise we’ll always be known as cowboy hats and football. And I love all those things. I love Big Tex. I love the Dallas Cowboys. But we have a great art scene and it doesn’t get the shake it deserves on the national level. And I mean arts overall. Visual, dance, theater, music; we have a great scene.