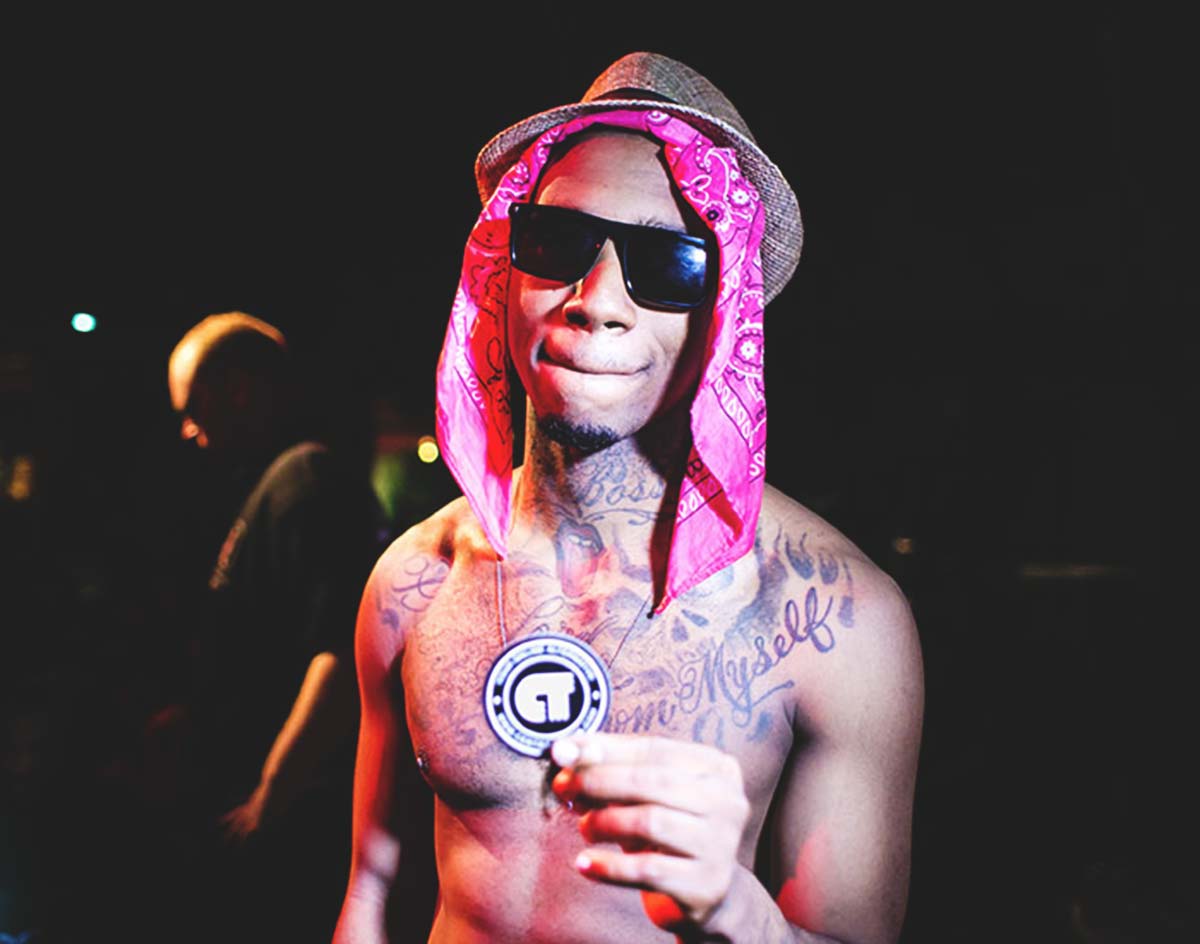 Scratch That Itch With Kid Capri, Lie to the FBI With Alkaline Trio, Paint Some Happy Little Trees Bob Ross Style, Get Based With Lil B and More.

If you’ve ever been to a Planet Fitness to workout, you’ll recall the many signs boasting it as a “judgment free zone.” Turns out, that rule only really applies to enjoying workouts free from getting shamed by people in better shape than you.

As one New Hampshire man recently found out, it does not apply to working out naked. If you try doing yoga there sans skivvies, you most certainly will be judged. And charged with indecent exposure.

Let’s not just stop at Planet Fitness, though. It’s probably a good idea to stay clothed in public just about everywhere. For example, the following list of places all require your junk adequately covered if you head there this weekend. — Cory Graves

Scratch Session: Kid Capri at It’ll Do Club
Catch the Def Comedy Jam DJ at Banjos to Beats’ summer-long hip-hop history lesson. It’s half over now, but Mix Master Mike and DJ Jazzy Jeff will each roll through in the coming weeks as well to finish out the series. — CG

Donnie Darko at Inwood Theatre
Richard Kelly has had one of the most idiosyncratic careers of any modern director. His first feature, Donnie Darko, failed to catch on in theaters in 2001, but quickly became a cult classic thanks to word-of-mouth and a director’s cut that helped the film make a little more sense. Here it’ll be shown in theaters – at midnight on both Friday and Saturday — for most of us that missed it in the first run. — Kip Mooney

William Clark Green at Mama Tried
Even if you like The Beatles and your boo likes the Stones, you’ll find some common ground at this alt-country show. It’s the biggest thing Deep Ellum’s newest honky-tonk has hosted to date. — CG

Alkaline Trio at The Bomb Factory
Pop-punk is angsty, fast, and rich in wordplay. Two decades into their career, Alkaline Trios’ pistons are still firing well on each the above cylinders. Sure, they may not be as young and angry as they once were. But old and cynical can be a decent look in the right lighting, too. — Pete Freedman

Bodega at Main At South Side
The Brooklyn band FKA Bodega Bay brings its anti-consumerist post-punk to Fort Worth. Their debut under the new name was produced by Austin Brown of Parquet Courts, who also signed them to the band’s What’s Yr Rupture label. War Party and Loafers open. — CG

Knox Hamilton at Dada
After a few swims through town as openers, the Little Rock indie rockers are back as part of their first-ever headlining run. This humble dance-y outfit is recommended for fans of Moon Taxi and the like. Brother Sundance and Alex Di Leo open. — CG

Paul Wall Meet & Greet at T-Town Music
To celebrate/promote his new “DTFO” single, Mr. Wall is taking selfies with fans in the music kiosk of the Bruton Bazaar from 5:30 to 7 p.m. — CG

Omar Apollo at Three Links
The Soundcloud singer-songwriter brings the washy guitar and smooth falsetto of his bedroom pop/throwback soul project to the stage. — CG

Erasure at Toyota Music Factory
Somehow the “A Little Respect”outfit didn’t land a cut on the vaunted Wedding Singer soundtrack. It is apropos of nothing but the fact that I was listening to it the other day and couldn’t believe “Chains of Love” didn’t sneak its way in there. — CG

Bob Ross Tribute Painting Night at 2513 Deep Ellum
For your $50, this happy little evening provides paints, canvases, easels, aprons, etc. along with a live instructor, a free drink ticket and old episodes of The Joy of Painting looping on the big screens. This is your world. You’re the creator. Find freedom on the canvas. Believe you can do it, because you can do it. There are no mistakes, just happy little accidents. — CG

Love Never Dies at Music Hall at Fair Park
Andrew Lloyd Weber could have called his 2010 musical Phantom of the Opera 2: Electric Boogaloo, but he, um, went a classier route. The new (by comparison) Phantom sequel runs through this Sunday, then it heads over to Fort Worth for a spell. – CG

Mezcla: A Group Art Show at Fort Worth Community Arts Center
Mezcla means mixture, and for the next month six Fort Worth-based artists will be mixing it up as part of this group art show. Those include Rose Reyes, Mariell Guzman, Jesse Sierra Hernandez, Jack Russell, Will DeShazo and Wyatt Woodruff Adams. — CG

Bengali Film Festival of Dallas at Angelika Film Center (Plano)
Friday’s featured film is 2017’s Khacha: The Cage, the Bangladeshi seleciton for Best Foreign Language Film at last year’s Oscars. It’s based on a 1947 short story of the same title about a Hindu family migrating to India after the Indian Parition of 1947. — CG

Lil B at Canton Hall
Turns out, it’s not just one of his catchphrases; Lil B appearances in Dallas are actually rare. How rare? So rare that it’s been five years since he came through to perform in Dallas last — a drought that will be rectified come Saturday when the Based God returns to Dallas to perform at Deep Ellum’s Canton Hall. And just as was the case during that last stop in Dallas, which went down at the Prophet Bar and just so happened to be Lil B’s first-ever Dallas gig, we’re honored to be co-presenting this performance as well. Why? Well, here’s what we wrote in an open letter to The Based God in praise of that stop: “You exceeded our highest expectations, and trust me, our expectations going into last night’s show were extraordinarily high. From the rambunctious group of folks up front [who were] crowd surfing or crowding the stage in hopes that your fingertips just might touch theirs to the more reserved set looking on from the back of the venue, all eyes were undisputedly on you. And for good reason; how could anyone possibly resist enjoying one of your sets? When you really get going, it doesn’t matter any more that you’re not the world’s greatest lyricist or that your flow isn’t necessarily the tightest. Simply put; you exude positivity and it is overwhelmingly infectious.” — Pete Freedman

Sales at Trees
The Gorilla vs Beaer-adored outfit brings its breezy, Orlando brand of indie-pop to town. The summer vibes drip from their hip pores. Skirts and No Vacation open. — CG

Panic! at the Disco at American Airlines Center
Over the years, Panic! at the Disco has lost its exclamation point and a couple of founding members. More recently, the band brought the exclamation point back and released albums that have received heavy criticism for frontman Brendon Urie’s tendency to be a whiny little bitch. Not that he necessarily cares. Nor should he. — CG

The Bell Avenue Beatdown at BackYard on Bell
The legendary Von Erichs return to the ring, as Kevin’s sons Ross and Marshall compete in tag action on a full card of matches. — CG

Joonbug’s Lenworth 3 The Early Years at {neighborhood}
The Dallas illustrator’s new show examines his earliest inspirations. Bug him about it in person at Saturday’s artist reception. The show runs through the 27th. — CG

Sara King (EP Release) at Texas Theatre
King’s been releasing covers of pop tunes to her YouTube channel for five years now, and she’s garnered something of a loyal following on that platform. For instance, her “Redbone” cover has over a million views! Now, she’s toying with writing some glitter pop originals to call her own — and she’s got some great folks helping her out. Released a few weeks ago, “Dreamz” is the first original tune she’s put out, and it was produced by the wonderful Herrick & Hooley. She’s got an EP called Heat on the way, too. She’ll host a release show/party for that one following that Wild Bunch screening above. — CG

Big 4 Tribute at Granada Theater
Now that Slayer’s called it quits, you’ll probably never get a true tour of thrash metal’s original Big 4. But tributes to Megadeath, Anthrax, Slayer and Metallica will share the stage at the Granada. — CG

Tyler Shields: “The Color of Impact” at Samuel Lynne Galleries
The provocateur shows off new work, a series of photos of buckets of paint being splashed on human faces. The show runs through September 1, and the artist will be in attendance at this reception. Ask him about that time he painted with celebrity blood. — CG

The Merles at Mama Tried
The Austin band attempts to recreate the Western swing and classic country of the ‘60s and ‘70s, back when their namesake Mr. Haggard was ruling over the genre. They’ll fit right in at Deep Ellum’s new honky-tonk, which has proclaimed itself staunchly anti pop country. Hell, the bar’s named after a Merle tune, too. — CG

Bengali Film Festival of Dallas at Angelika Film Center (Plano)
Saturday’s feature film is Sahaj Paather Gappo, which roughly translates to Colours of Innocence. It follows a 10-year-old boy whose live goes from carefree to stressful after his father has an accident, can’t work leads the family into poverty. — CG

Upsetting, Ting Tang Tina, The Prof. Fuzz 63 at Three Links
After this show, Upsetting’s headed out on a month-long tour. So, um, buy some merch – like the debut LP they dropped just last Friday – and put some gas in their tanks. — CG

Headbang for the Highway: Summer Slaughter Tour Showcase at The Prophet Bar
Between the Buried and Me, Born of Osiris, Veil of Maya and about six other bands whose logos aren’t the easiest to read all perform at the quote-unquote most extreme tour of the year. — CG

Aqua: Justin Jay at SiSu Uptown Resort
No running near the pool. Flossing, however, is encouraged. — CG

Sunday Funday at Panther Island Pavilion
Every Sunday through September 2 there’ll be beers for drinking and tubes for floating a slightly less gross portion of the Trinity. — CG

Brunch on Broadway: Seven Brides for Seven Brothers at Alamo Drafthouse (Cedars)
You can only nom on the theater’s brunch menu on Sundays when they show classic Broadway musicals. This week’s feature is 1954’s Seven Brides for Seven Brothers, a film known for its ability to make mundane activities like building barns seem spectacular through epic song and dance numbers. — CG