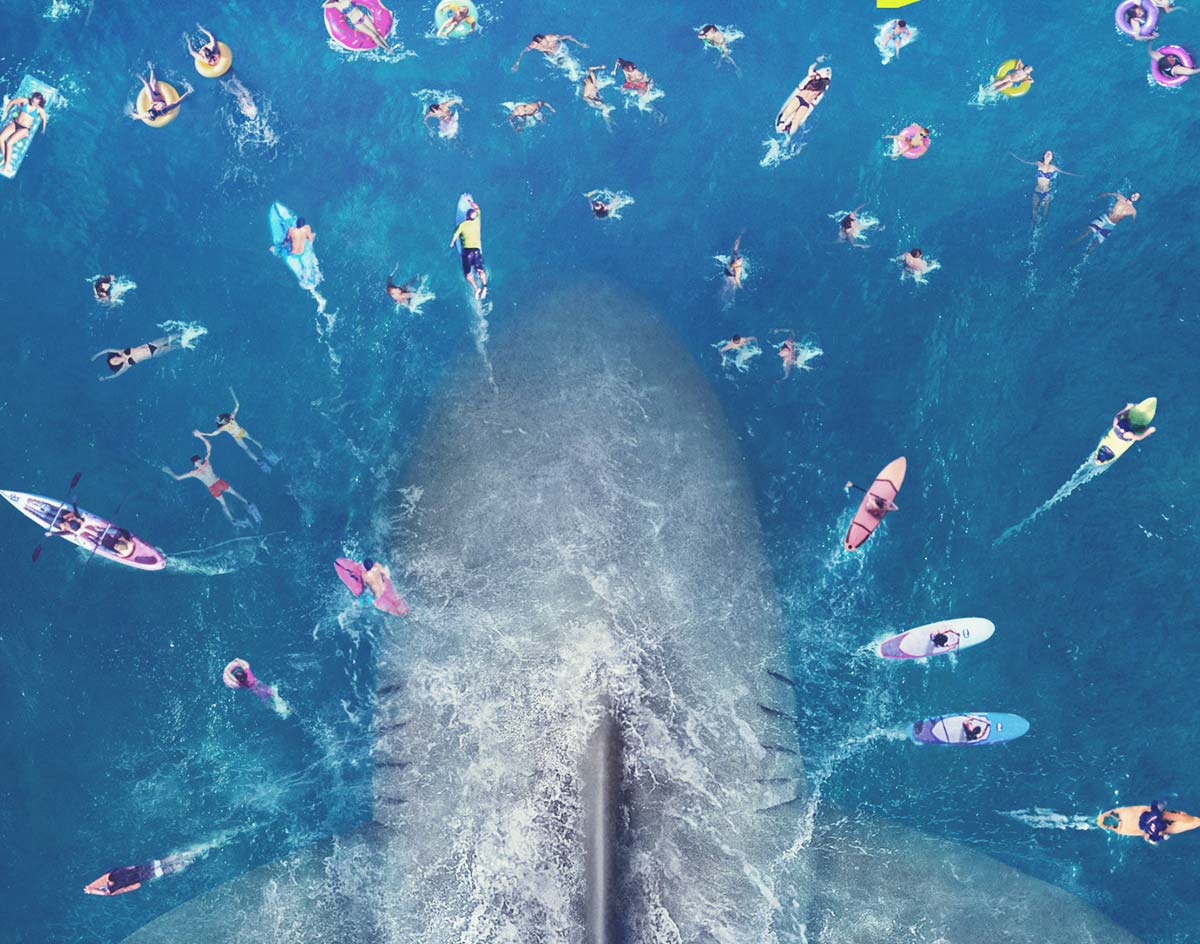 You’d think Hollywood would have figured it out by now.

I mean, c’mon. It’s August. And, same as every other year, it’s too hot to do anything other than sit in an air-conditioned room and wait on the outside temperatures to drop.

Is asking the industry to save some of the big movies of the summer for the end too much to ask?

Apparently yes. I’ll be frank: This month is kind of a mixed bag as far as new releases go. But at least the options at the top of the big-release scale look fun, right? I’m not too mad at the prospect of a campy shark attack movie, an R-rated puppet movie and the latest example of Mark Wahlberg blowing stuff up real good.

The most interesting releases this month, however, are a little bit lower on the radar — including a film with a (surprisingly rare) all Asian-American cast, what looks to be a great effort from (the quite inconsistent) Spike Lee and even a comedy shot right here in North Texas.

Plus, the Alamo is showing the greatest comedy of all time (of all time, I said!) on Sundays this month.

The Meg.
Director: Jon Turtletaub.
Writers: Dean Georgaris, Jon Hoeber, Erich Hoeber.
Cast: Jason Statham, Rainn Wilson, Ruby Rose, Cliff Curtis.
Opens: Friday, August 10.
It’s too bad my beloved MoviePass is changing its terms of service again (and might even go belly-up), because this really is the ultimate MoviePass movie — well-made trash that you’d probably regret paying $15 for but would have no qualms about seeing for free. Jason Statham plays his usual bald badass self, while Rainn Wilson plays the marine biologist investigating a sighting of a megalodon, a prehistoric gigantic shark that’s somehow back and wreaking havoc. This seems like it’s the right amount of self-aware and ridiculous, unlike the too far over-the-top Sharknado sequels.

Crazy Rich Asians.
Director: Jon M. Chu
Writers: Peter Chiarelli, Adele Lim.
Cast: Constance Wu, Henry Golding, Michelle Yeoh, Awkwafina.
Opens: Wednesday, August 15.
Every summer, there’s a hit that’s basically without precedent. It doesn’t compete with the huge blockbusters, but it does really well and sticks around a lot longer than those movies. I’ve been expecting big things from this one ever since it was announced. Based on the best-selling beach read, this is one of the first movies ever with an all-Asian-American cast. Constance Wu (Fresh Off the Boat) gets a chance to become a major star, as the middle-class girlfriend of Henry Golding’s Nick, who turns out to come from one of the richest families in Asia. At the head of the family is Michelle Yeoh (Crouching Tiger, Hidden Dragon) playing one of the iciest bitches in movie history. This is bound to be the biggest word-of-mouth success of the year.

Mile 22.
Director: Peter Berg.
Writers: Lea Carpenter, Graham Roland.
Cast: Mark Wahlberg, Lauren Cohan, Iko Uwais, John Malkovich.
Opens: Friday, August 17.
Peter Berg may not be among the great directors, but he’s made some of my favorite movies. After turning in Battleship, one of the worst movies of the decade, he rebounded with Mark Wahlberg, churning out three dramas based on very recent events. Lone Survivor, Deepwater Horizon and Patriots Day all vary in quality, but are solid at-home watches. Berg ventures back into straight-up action territory here with Wahlberg playing the head of a paramilitary outfit trying to transport a witness (Iko Uwais) from the U.S. Embassy to an airstrip where he can be taken out of the country to testify against his own countrymen. There’s probably going to be some ugly characterizations of the villains, but this is sure to be entertaining, even if I have serious doubts about Ronda Rousey’s acting ability. (Could you not have just used Gina Carano again? She already proved herself in Haywire.)

The Happytime Murders.
Director: Brian Henson.
Writer: Todd Berger.
Cast: Melissa McCarthy, Bill Barretta, Joel McHale, Maya Rudolph.
Opens: Friday, August 24.
I’ve been waiting for this movie for a decade now, so I hope they actually pull this off. Melissa McCarthy plays the human partner of Phil Phillips, a hard-drinking puppet detective investigating a string of puppet murders. Brian Henson has already directed two Muppet movies, so it’s really just a matter of the jokes landing. This could go wrong in so many ways, but I’m a McCarthy believer and, since she rescued this project from development hell, I’m hopeful it can go right.

Black Klansman.
Director: Spike Lee.
Writers: Charlie Wachtel, David Rabinowitz, Kevin Willmott, Spike Lee.
Cast: John David Washington, Adam Driver, Topher Grace, Robert John Burke.
Spike Lee gets back into the mainstream with this biographical drama centered around Ron Stallworth (John David Washington), who successfully infiltrated the KKK in the ’70s and got many to hang up their robes in the process. The killer cast includes Adam Driver as Stallworth’s Jewish partner and Topher Grace playing way against type as David Duke. This movie seems to have it all — a great soundtrack, attention to detail and Spike’s incredible dolly shots.

Madeline’s Madeline.
Director: Josephine Decker.
Writer: Josephine Decker.
Cast: Helena Howard, Molly Parker, Miranda July, Lisa Tharps.
I’m not going to even pretend like I understand anything that’s going on here, but practically every single review from the many film festivals this has played at has had nothing but raves for newcomer Helena Howard’s performance. So while there are a lot of indie movies headed your way this month, it seems best to take a chance on one that won’t be like anything you’ve seen before.

Summer of ’84.
Directors: Francois Simard, Anouk Whissell, Yoann-Karl Whissell.
Writers: Matt Leslie, Stephen J. Smith.
Cast: Graham Verchere, Judah Lewis, Caleb Emery, Cory Gruter-Andrew.
With no Stranger Things until next summer, this dark murder mystery will have to do. Four buddies decide to spend the hot days and breezy nights investigating a serial killer, who might be their neighbor and a cop (GLOW and Mad Men‘s Rich Sommer). Yes, that’s derivative, but it could be just what the doctor ordered when it’s 105 outside again.

Donnie Darko.
Director: Richard Kelly.
Writer: Richard Kelly.
Cast: Jake Gyllenhaal, Drew Barrymore, Patrick Swayze, Jena Malone.
Playing At: Inwood Theatre.
Showing: Friday, August 3; Saturday, August 4.
Richard Kelly’s magnum opus remains the most effective of the three films he’s made, even if it makes about as much sense as the others. Jake Gyllenhaal’s performance remains one of the best breakout roles ever, and that soundtrack is absolutely killer. If you skip out on this, I doubt your commitment to Sparkle Motion.

Duck Soup.
Director: Leo McCarey
Writers: Bert Kalmar, Harry Ruby.
Cast: The Marx Brothers, Margaret Dumont, Raquel Torres, Louis Calhern.
Playing At: Alamo Drafthouse Cedars; Las Colinas; Richardson; Lake Highlands
Showing: Sunday, August 5; Sunday, August 12; Sunday, August 19; Sunday, August 26.
Comedy is subjective, but I don’t like to mince words. To me, this is the greatest comedy ever made. The Marx Brothers were never better in this masterpiece of physical and verbal gags that also has a sly political satire streak that’s actually pretty relevant today. The mirror scene alone is a classic, but the whole thing – only 70 minutes long! – demands to be seen with a rambunctious audience. The Drafthouse is rotating this film: Each Sunday this month, it will be at a different area theater. So you’ll get plenty of opportunities to check this one out.

Frida.
Director: Julie Taymor.
Writers: Clancy Sigal, Diane Lake, Gregory Nava, Anna Thomas.
Cast: Salma Hayek, Alfred Molina, Antonio Banderas, Edward Norton.
Playing At: Texas Theatre.
Showing: Thursday, August 9.
Julie Taymor’s biopic of one of the most important artists of all time is a visually stunning portrait of a flawed but talented woman with big dreams and big passions. It doesn’t gloss over her mistakes, and doesn’t try to excuse any behavior because she was a genius. Also, it’s great that theaters are showing movies like this just because they’re great. It’s not an anniversary, no one died and it’s not an iconic ’80s movie. It’s just a gem.

Written on the Wind.
Director: Douglas Sirk.
Writer: George Zuckerman.
Cast: Rock Hudson, Lauren Bacall, Robert Stack, Dorothy Malone.
Playing At: The Magnolia.
Showing: Tuesday, August 14.
When it comes to melodrama, Douglas Sirk really had no equal. In the ’50s, he regularly knocked it out of the park with his “weepies” as they were called at the time. They’re so well-regarded, in fact, that several of his movies are in the Criterion Collection, which can sometimes be a little snobby. So take in the romantic quadrangle between the four stars, all gorgeously shot in color.