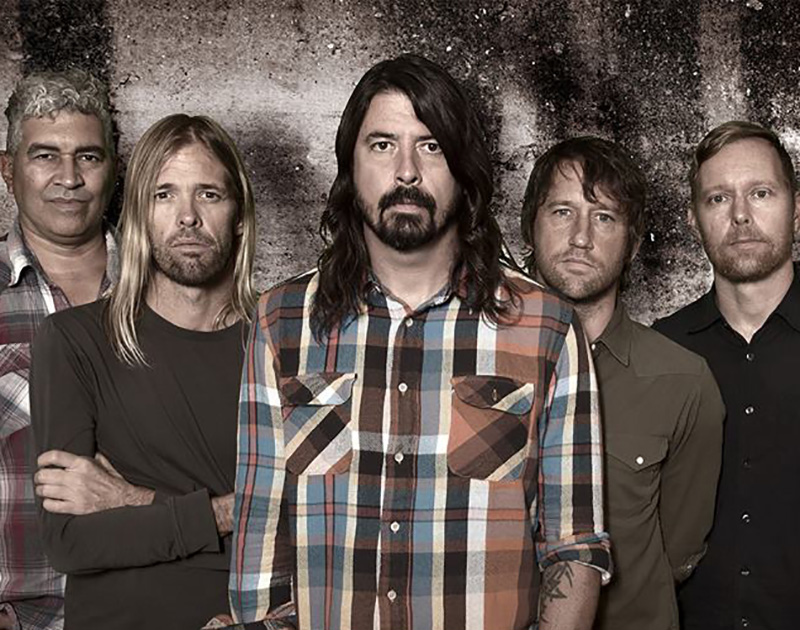 Learn To Fly With Foo Fighters At Starplex Pavilion, Enjoy The View At The 4/20-Themed Ruby Revue Burlesque At House Of Blues And Celebrate Music And Arts At Fort Worth’s Main Street Arts Festival.

It’s 4/20! Hurry up and get your jokes out of the way because they’re all going to get pretty old today.

But here’s a fun fact you may not know about the “holiday” beloved by cannabis aficionados: the festive day can be traced back to Northern California and 1971.

A group of five friends who called themselves The Waldos would use the number 420 to plan a meeting at 4:20 to roll a fat one. The rest, as they say, is history. And since then, the code has become the universal calling card for tokers everywhere to blaze it up.

Colter Wall at Club Dada
Though he hails from Canada, singer-songwriter Colter Wall carries on the tradition of gritty blues and American country. His style, though rooted in old musical traditions, seems quite refreshing compared to a lot of mainstream country acts. Opening act Jade Bird is one of the most promising country songwriters to appear within the past couple of years. Her beautiful voice compliments her emotional country ballads her songs carry a sense of honesty and passion that makes music so compelling. — Jacob Besser

Midnight at Double Wide
The Ohio-based metal band blends black, thrash and heavy metal to create a classic heavy sound that reminds you just how cool worshipping Satan really is. (Totally kidding, but the music is fucking rad.) Cleric is an avant-garde metal band from the underground metal and hardcore scene in Philadelphia, this band continues to push the envelope by incorporating sounds from all across the landscape of metal and by demonstrating their technical skill through tons of time signature changes and insane compositions. Pissed Grave is the band your Mom doesn’t want to know that you listen to. Its punishing style of grind, hardcore and crust stands out as one of the most brutal acts we’ve heard in a while. — JB

Ruby Revue Burlesque 4/20 Party at House of Blues
This installment of Ruby Revue will feature all the usual performances with a bit of a 4/20 influence. There’ll be a few giveaways as well, so look alive and don’t get there too blazed. — OM

Main St. Fort Worth Arts Festival
Fort Worth’s premiere arts festival continues through the weekend. Be sure to click the link above for full festival details and to see who’s playing at the stage on Main. — OM

Nikki Lane at Big Beat Dallas
The outlaw country singer continues touring in support of her most successful album to date, Highway Queen. And she’s stopping at the newly minted Big Beat Dallas at the Toyota Music Factory. — OM

Happy Clouds at South Side Ballroom
The Happy Clouds 4/20 fest will feature Seven Lions, What So Not, G Jones, Eporm and Ill76. — OM

Charley Crockett at Majestic Theatre
Indie folks singer David Ramirez will join the hometown Crockett on the day when the latter will release his newest album. — OM

420 Fest at Killer’s Tacos (Denton)
No Hope For Alderaan presents this two-day festival that will feature performances from the likes of Hazel, Suffer The Human Condition, Civil Unrest, Kombat and Forget Conformity. Check the link above for details and schedules. — OM

4/20 Fest at Rail Club, Tomcats West
Demun Jones and Hex Rated will headline this 4/20 fest. But 10 other bands will be trying to rock your socks off at both venues. Music starts at 7 p.m. — OM

Equest After Dark Gala at The Bomb Factory
Join the Dallas-based non-profit on this fundraising night. The organization works to introduce children and adults to the joys of equestrian sports. — OM

Railroad Earth at Granada Theater
Railroad Earth is a progressive bluegrass band, which is apparently a thing. Known for its unique selection of instruments and refined arrangements, the band attempts to take what people think they know about bluegrass and Americana music and flip it on its head with the use of drums and amplifiers. — Paul Wedding

Jeff Bezos at SMU
Hear from the Amazon founder. Tickets are sold out, though, so if you’re holding tickets, do not forget. Maybe you’ll pick up a tip that will lead to you becoming the next big billionaire. — OM

Movies In the Park: Jumanji at The Shops at Park Lane
Was this movie even good? Read this review and maybe see for yourself tonight. – OM

Jukebox The Ghost at Cambridge Room
The members of this piano trio had long careers before they found each other. But now they’re on a collective mission to bring good ol’ powerpop to the masses. — OM

Houndmouth at Granada Theater
The alternative blues band out of New York state may have lost the angelic voice of Katie Toupin, but the now-trio is still touring playing all the jams you know and love. — OM

EarthX Music Stage at Fair Park
As part of the ongoing EarthX celebration, the likes of Black Joe Lewis, Atlantis Aquarius and Medicine Man Revival will perform at noon. — OM

2018 Velvet Hammer 5K at Peticolas Brewing
Burn off some beer carbs either by walking or running. The folks at Peticolas will have frosty brews waiting for you at the finish line. — OM

Foo Fighters at Starplex Pavilion
The iconic alternative rock band stops in Dallas while on its Concrete and Gold Tour. Of course, tickets have been sold out for quite some time now, so good luck getting into the show. — OM

An Evening With Shea Serrano at Texas Theatre
The author of two New York Times Best Sellers comes to town to celebrate De Colores’ one-year anniversary. FOH Army, get in the house and bring some Big Red. — OM

Ninth Annual Crawfish Boil at City Tavern
It’s that time again. The Ninth Annual City Tavern crawfish boil starts at 2 p.m. and runs until the buggers have all been eaten. — OM

Lower Greenville Market
There’s no available list of vendors that will be at this event hosted by Austin-based REVELRY, but admission is free. Market runs from 11 a.m. until 5 p.m. — OM

Dollar Day at Lone Star Park
The magic words have been spoken: dollar day. Get in for just $1 and then get pretty much everything else for $1: food, beer and some bets on the ponies. It’s worth the trip just to get some grub in on the cheap and see some cool races, if you think about it. — OM

Sweet Crude at The Rustic
The Louisiana band had a busy 2017 by releasing an album and performing at Bonnaroo, New Orleans Jazz and Heritage Festival and High Sierra. But now the band is in town for an intimate performance. — OM

Locked & Loaded at Armoury D.E.
Sub-Sahara, Teenage Sexx, Rosegarden Funeral Party and The Bralettes are putting on this dope punk/indie/pop rock show for free. Some of North Texas’ finest talent will be on display tonight. Better not miss out. — OM

Yella Beezy at The Door
The local hip hop superstar is breathing life back into The Door. — OM

J. Roddy and The Business at Trees
Though they may not come off that way at first listen, J. Roddy Walston & the Business is a hard band to pin down. Yeah, the Southern rock/alt-country aspects immediately jump out, but the undertones of R&B and Walston’s Jerry Lee Lewis-like piano licks are key indicators that there’s much more at play in the band’s material. You won’t really care about any of that tonight, though, because the thing that’s really made this outfit famous is boot-in-your-gut, Zeppelin-rivaling swagger the band performs with in a live setting. — CG

Ryan Berg at Prophet Bar
The local alternative/indie rock singer might just be one of the next big things to come out of Dallas. He’s putting in his dues playing all over Dallas and making sure the local crowd knows what he’s about. So head out and support local tonight. — OM

Less Than Jake at Gas Monkey Bar N Grill
The ska/punk band may have had its heydays in the’90s, but the crew is still touring and playing all the tunes you know and love. Or maybe recognize for a ‘90s teen movie but can’t quite place. — OM

Japanese Spring Food Festival at Niwa Japansese BBQ
Admission to this celebration of Japanese cuisine is free, but prepaid food tickets are available online. Niwa, Y’s Catering Kitchen and the soon-to-be-open Ichigoh will be serving up all the food. Event runs from 5-9 p.m. — OM

EarthX Music Stage at Fair Park
As part of the ongoing EarthX celebration, Chucho, Cody Jasper and Band of Heathens will close out the two-day music series. — OM

Neon Indian DJ Set at Big Beat Dallas
The Denton band has continued touring with its 2015 album Vega Intl. Night School, an album that was described as the project when Alan Palomo “finally [freed] his dirty mind, even as the music [maintained] a veneer of innocence,” by Pitchfork. Best of all, tonight’s show is free.  — OM

Janeane Garofalo at Texas Theatre
You’ve seen her in numerous films and comedy specials. And maybe she’s gotten under your with her quick-witted, well-informed discussions. Expect nothing less from the comedienne tonight. Local funny person Seth Cowles opens the show. — OM

The Breeders at House of Blues
Kim Deal’s band returns to the scene with a new album for the first time in 10 years. Even better than new music from The Breeders? All Nerve, the latest album, was recorded with the same lineup the band had with 1993’s iconic Last Splash. So yeah, tonight’s show will have a very classic feel to it. Post Pink opens. — OM

Lee Ann Womack at Kessler Theater
The award-winning country superstar stops in town to put on a show in Oak Cliff where she’ll be singing both classics and new songs off her latest release, 2017’s The Lonely, The Lonesome & The Gone. Hometown act Vandoliers opens the show. — OM

Bugs & Brews at Sundown at Granada
The third annual Crawfish Boil and Music Festival will feature crawfish (duh) and performances from Vandoliers, Silas Nello, The Free Loaders and Club Wood. The fun kicks off at 1 p.m. — OM

A Tribute To Braniac at The Curtain Club
This tribute to the ‘90s indie rock band will feature performances from Starfruit, Post Palace, WSG and Sweet Chaos. Students from the School of Rock will also put on a special performance. Proceeds will go to funding a documentary about Braniac. — OM

Screaming Females at Club Dada
This one is for those who crave dark lyrics about on-and-off relationships delivered with a mix of smooth riffs. Here’s you chance to see the New Jersey alternative punk band that knows how to blend those moody lyrics into its even moodier sound. Check out “Hopeless,” a good indicator pretty much describes the band’s sound. HIRS opens. — Juan Betancourt

Them Evils at Prophet Bar
The Huntington Beach, California trio spent a year touring. And while that may burn some bands out, life on the road sent the band right back into the studio. And just last month, Them Evils released “Got Me Rockin’,” a tune that seems to indicate that the band is ready to keep riding the classic rock wave that’s launching them to the spotlight. Blueline opens. — OM

West Side Story at Majestic Theatre
Catch the screening of this Rita Moreno classic at 5 p.m. — OM