Things To Do In Dallas This Week: October 29 – November 1. 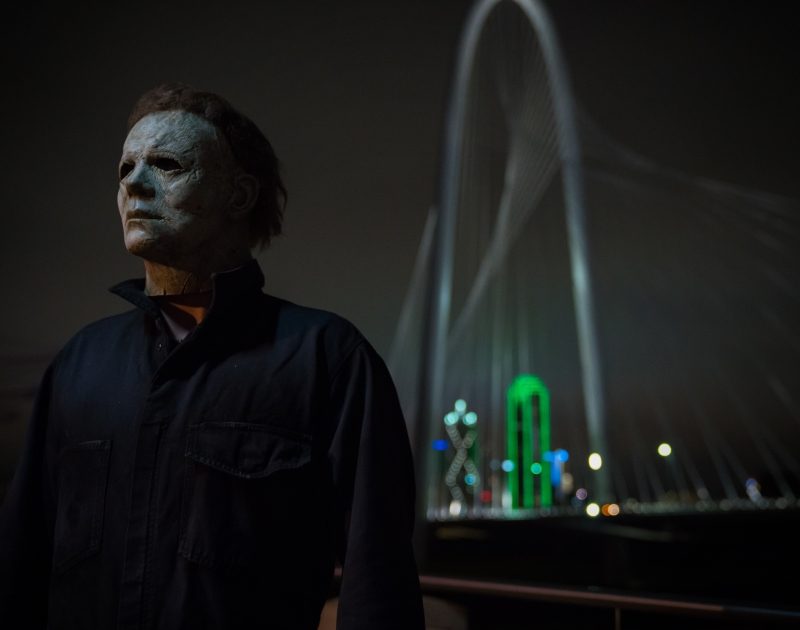 Carve a Pumpkin, Catch a Spooky Ballet, Throw It Back At A ’90s Dance Party Or Rock Out With Scranton’s Finest.

Just in time for the end of spooky szn, layers of massive collection of spider webs have completely covered the Greek beach of Lake Vistonida. It’s haunting, terrifying for arachnophobes, but incredibly beautiful.

This phenomenon is due to unusually warm weather (global warming is real, folks), which in turn increases the number of mosquitoes and gnats in the area — aka spider food.

The web currently spans 0.6 miles and covers literally everything in sight.

It’s a good thing we’re in Dallas and not in Greece because that’s a little too spooky for us. Instead, we’ve compiled another list of spooky and less spooky things to do this week.

End your October with a bang. — Claire Lin

Jessie J at House of Blues
Believe it or not, The R.o.s.e. Tour is actually Jessie J’s first ever American tour. — CL

Starcrawler at Dada
These young L.A.-based rockers have only been making music since 2015, but have already made waves at places like SXSW. — CL

Jessie Reyez at Trees
Most known for her song “Figures,” she’s on tour for her newest album, Being Human in Public. — CL

LANY at South Side Ballroom
LANY’s name isn’t the only combination of Los Angeles and New York. They blend vibes and music from the two to create a new sound. — CL

Singer-Songwriter Night at Blue Light Dallas
Dallas’ newest country bar doesn’t plan on opening up on non-show nights. For now, the plan is to keep the doors open Wednesdays through Saturdays from 6 p.m. to 2 a.m., with an import from its sister location in Lubbock — a singer-songwriter series — holding down Mondays. It’ll be hosted by former Lubbock musician Zac Wilkerson who just moved to Dallas, helping fill up the early week calendar. — CG

Pumpkin Carving Contest at The Libertine
Cash prizes available for the winners, but even if you don’t win, it’s OK because at least you had good beer.  — CL

A Nightmare on Dragon Street at DEC on Dragon
Food, drink and costume contests with cash prizes, all on a rooftop with a stellar Dallas view. — CL

Cooking Class with Tre Wilcox at Sea Breeze Fish Market & Grill
Chefs and non-chefs can learn three to four recipes and best of all, enjoy the wine pairings. — CL

Conan Gray at Deep Ellum Art Co. (Sold Out)
He first started as a young YouTube sensation, and now he’s amassed more than 9 million streams and international fans with his music. The fact that this concert is sold out is telling. — CL

The Fog at Alamo Drafthouse Cinema
John Carpenter and Jamie Lee Curtis’ Halloween has been all the talk this month, but their 1980 horror classic isn’t to be overlooked. It gets the 4K restoration treatment here. — CG

National Theatre Live: Frankenstein at Angelika Film Center
Filmed during a 2011 staging in London, this version of Mary Shelley’s most famous novel features Benedict Cumberbatch playing the good doctor and Johnny Lee Miller playing the monster — whose name was not, in fact, Frankenstein. — CG

“Eye Scream Wasted” at IQ Haus
Dallas’ latest selfie factory is open for business — for a limited time only. — CG

The Menzingers at Trees
Recently in town opening for Frank Turner at House of Blues, these punk rockers are the coolest thing to come from Scranton, PA since Dunder Miflin. — CG

Bride of Frankenstein at The Magnolia
Boris Karloff reprises his role as Frankenstein’s monster in this sequel, where he finally gets that mate he begged for during like the whole damn book. It screens twice today. — CG

Preston Fassel: Our Lady of the Inferno at The Wild Detectives
Fassel’s debut novel is a period piece — if you can call a book based around 1983 that — about a murderous female landfill employee. — CG

Texas Voting Celebration at Toyota Music Factory
Beto’s sure popular with the musican-folk, huh? Ryan Bingham, Cake, Stephen Stills, The Flatlanders and Hayes Carll are all playing this rally. — CG

Big Data at House of Blues
Alan Wilkis went No. 1 back in 2014 with a Joywave collab. He’s also worked with Kimbra, Twin Shadow and Weezer frontman Rivers Cuomo on past efforts. His new album is about robots taking over the world, which informs his electronic-rooted pop music. — CG

Meg Myers at Dada
Did you hear Meg Myers left Atlantic? No worries, she’s found a second life since being dropped and a new home for her sophomore alt-rock effort. — CG

Russ at Allen Event Center
Calling himself the “missing link between Kid Cudi & G-Unit,” Russ is one of the most interesting artists to come out of Atlanta since Outkast. With lyrics full of self-reflection and a sound all his own, this is a show you don’t want to miss. — Blake Lumley

Update: This event has been canceled. — CG

Halloween (Double Feature) at Alamo Drafthouse Cinema
The 1978 and 2018 versions screen back-to-back — on the actual Halloween holiday, no less. — CG

The Improvised Horror Movie at Dallas Comedy House
Come watch a rated-R, never-before-seen comedy show — because they’re just now making it up — made possible by your suggestions. — CL

Devin the Dude at Gas Monkey Live
Devin the Dude is a legendary rapper from Houston. He got in on the ground floor of Rap-A-Lot Records in the early ’90s and has had a pretty steady career since. Mainly, he’s cultivated a following of stoners who still wear baggy jeans and large tee shirts. Roll up a bunch of joints and take them to Gas Monkey to see this red-eyed cult hero. — H. Drew Blackburn

Thievery Corporation at House of Blues
Regardless of its lack of radio hits, big budget music videos and major label representation, this group has managed to thrive for more than 20 years, headlining at music festivals Coachella and Lollapalooza and influencing an entire generation of producers and DJs. On top of all this, they’ve collaborated with the likes of Perry Farrell, The Flaming Lips, Bebel Gilberto and more. — Lauren Keuning

Cane Hill at RBC
The Louisiana metal band is named for a creepy old English asylum said to be haunted by ghosts of the victims of some brutal 19th century murders. — CG

Decks in the Park Halloween Party at Klyde Warren Park
If there was a signature edition of this free monthly dance party series, it’d have to be the annual Halloween bash, where a thousand North Texans running the gamut from toddler to GILF show up in costume to dance the night away. — CG

Nosferat II, Lizzie Boredom, Sub-Sahara, Kolga at Three Links
Aside from the costume contest, there’s some added bonuses to this hard rock show. Nosferat II is putting out a live recording of its set, Lizzie’s doing a B-52’s cover set and Sub-Sahara’s doing The Cure. — CG

Dallas Cooper at Gas Monkey Bar N’ Grill
Cover bands are all the rage on Halloween, but none are more apropos than this local Alice Cooper tribute. — CG

Halloween Candy and Beer Flight at Flying Saucer
Pour some sugar on you — more specifically, in your mouth hole. — CG

Rooftop Halloween Night Masquerade at W Dallas
Taking place in the old Ghostbar space, this will be your best vantage point to look down upon all the peons celebrating their Halloweens at ground level. Well, except for Reunion Tower, maybe. Reservations are required. — Jeremy Hughes

Halloween on Halloween at The Church
Typically reserved for Sunday services, The Church takes over its sister space as the club-within-a-club does what it does best — celebrates the darkness and outer-limits of fun. — CG

The Music of Harry Potter at Bass Performance Hall
Yelling “Alohomora!” at the doors won’t get you into this one. You’ll have to buy a ticket to hear these familiar John Williams scores. — CG

Masego at Trees (Sold Out)
Alongside Richardson producer Medasin, the Jamaican-born saxophone player helped pioneer the rad new genre TrapHouseJazz a few years back. It’s wild and it’s pretty universally adored — hence why all the tickets are gone. — CG

…And You Will Know Us By The Trail of Dead at Curtain Club
Octopus Project may headline this one, but fellow Austinites, Trail of Dead, tour with far less frequency. Widely hailed early ’00s favorite Source Tags and Codes still totally holds up, too. It did earn a 10.0 on Pitchfork, after all. New Fumes opens. — CG

Steve Aoki at Lava Cantina
You may have to pay for your ticket, but play your cards right and you’ll wind up with some free cake. — CG

Four Fists at Deep Ellum Art Co.
Run the Jewels ain’t the only super rap duo game in town no mo. This new pair-up from P.O.S. and Astronautalis is all the rage. — CG

10 Years of Cheese at Dallas Farmers Market
Six local cheesemakers along with a bunch of beer and wine will be at the Farmers Market celebrating Oak Lawn cheesemonger Scardello celebrate 10 years in biz. — CG

Tramaine Townsend: “Suspense” at Arts Mission Oak Cliff
The director of Bobby Sessions’ The Hate U Give video is exhibiting an entire series of video vignettes at this one. — CG

Day of the Dead at The Nines
Just because Halloweeen’s over, don’t mean the party’s gotta stop. Paint your face and roll through this dance. — CG

Cover photo of “The Shape” in Dallas by Ryan Green.