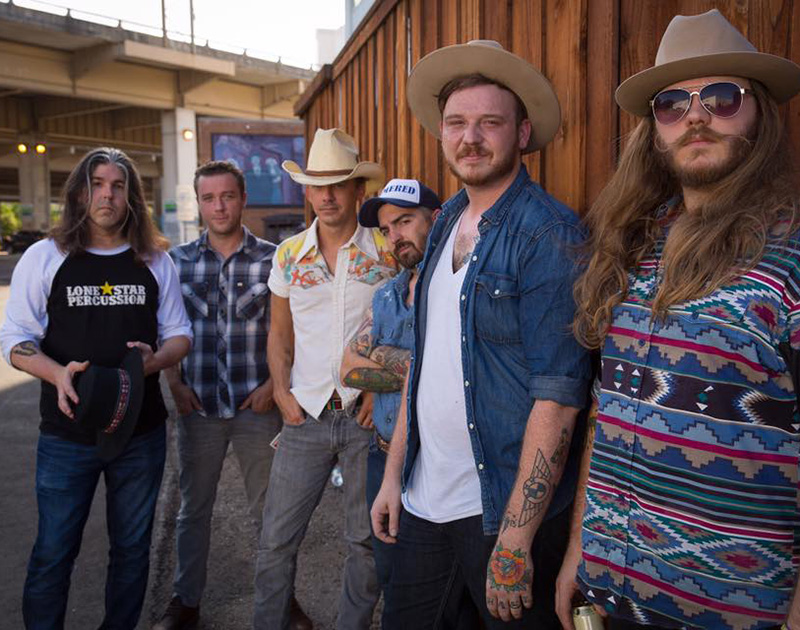 Let City And Colour Soothe Your Soul, Jam With Vandoliers In Fort Worth, Set It Off With Bryson Tiller And 50 Other Things To Do This Weekend.

There’s plenty to do this weekend, but one event in particular will have the eyes of the nation and all of the sports world.

Millions will tune in Saturday night when the undefeated Floyd Mayweather Jr. takes on UFC’s Conor McGregor. The two fighters will make millions and we mean millions of dollars that night.

But we’ve put together a handy list of places in Dallas that will be showing the fight without a cover charge. Sure, you’ll probably spend a bit more on food and drinks here, but at least you’ll be spending money on yourself and having a good time instead of putting more money in the pockets of these two already-rich hombres.

Waiting for that fight is one way to spend the weekend, but there’s still Friday, most of Saturday and Sunday to figure out. Worry not, however, as we’ve got you covered on how to kill time waiting for the big fight or, if that’s not your thing at all, there are plenty of things on this list to keep you busy through the weekend. — Obed Manuel

Bryson Tiller at The Bomb Factory
Bryson Tiller’s ascent to stardom happened pretty quick. The R&B singer-songwriter from Kentucky’s debut Trapsoul album debuted at No. 11 on the Billboard charts and helped him garner a large and rabid fan base. Tiller’s music is reminiscent of other contemporary singers that mix elements of rap music, but opt to sing it instead, like PartyNextDoor and Ty Dolla $ign. — H. Drew Blackburn

City and Colour at House of Blues
If Dallas Green’s post-hardcore outfit Alexisonfire was somehow too heavy for you, good news! He’s done with that outfit! These days, the singer-songwriter is fronting his decidedly softer former side project, City and Colour, and touring the country once more. — Pete Freedman

Anklepants at The Nines
This guy is a filmmaker, musician and instrument builder, but the biggest takeaway from his show will be that he takes the stage with a type of penis mask on his head. Seriously. No joke. Asukubus will also perform. — OM

Midnight Madness: The Room at Inwood Theatre
The worst movie ever made. No, seriously, it is. This is a story about betrayal, weird football tossing and horrible dialogue. Bring spoons, but don’t throw them at the screen until you know what the rules are. — OM

Brew-HaHa Date Night at Lakewood Brewing
It’ll be a dating show in real life and the lucky winner will be able to take a comedian on a date. But they won’t be able to see them — they can only listen to the comedian’s jokes! The show will be hosted by Tyson Faifer of “Love Connection” and “Million Dollar Matchmaker.” — OM

Sammy Kershaw at Billy Bob’s Texas
From such archetypally named country hits as “Queen of My Double-Wide Trailer” and “She Don’t Know She’s Beautiful.” Doors open at 6 p.m., live music starts at 8 p.m. and Kershaw’s show kicks of at 10:30 p.m. — Alex Copeland

Straw Hat Society at Double Wide
Fill up on $2 Lone Stars while you jam with his hillbilly rock/folk tune spittin’ crew. Over the River also performs. — OM

Decks In The Park at Klyde Warren Park
This free music festival runs from 6-10 p.m. and will feature local DJs like Ursa Minor and JT Mud from Ishi. — OM

Blow-Up New Restoration and Swingin’ ’60s Dance Party at Texas Theatre
Come for Italian director Michelangelo Antonioni’s classic Blow-Up and stay for the dance party after the showing. Dressing up is very much encouraged. — OM

Flavors with DJ Menace at Off The Record
DJ Menace of Boom 94.5 spins at this free event. Come ready to turn up. — OM

Lucha Dallas Open Mic Night at Maroches Bakery
This open mic night is for everyone who loves pan dulce and cookies and coffee. The folks at this Oak Cliff bakery are giving queer people of color an opportunity to express through song, comedy and performance art. — OM

Prozak at The Curtain Club
The Michigan rapper calls himself The Hitchcock of Hip Hop, probably because he features in every single one of his songs. OK, there’s a more creative reason than that, but that still counts. He’ll be joined by Sup3rsayin, Creature Clique and Lil G Tha Prophet tonight. — OM

Panic Volcano Album Release at Three Links
The rockers of Panic Volcano will be joined by Blands and Sight Seers as they celebrate the release of the band’s sophomore album Speak Your Evil. A mere $8 gets you in at the door. — OM

Meat Fight 1K at TUPPS Brewery (Sold Out)
This one-kilometer fun run will benefits, Meat Fight and the National Multiple Sclerosis Society. And of course, you’ll be able to drink all the beer and eat all the meat. It looks like tickets are sold out, but maybe you’ll get lucky and someone will be selling one… — OM

Dallas Cowboys vs Oakland Raiders at AT&T Stadium
It’s a preseason game, but hey, this is where Zeke will get some plays in before his suspension kicks in. — OM

Vandoliers at Main at South Side
Dallas’ own cowpunk sextet passes through home on tour after making waves all summer long throughout the country. — Alex Copeland

Moon Boots at It’ll Do Club
When speaking of Moon Boots, one would likely think of footwear for astronauts, or those hideous UGG boots that will be returning in the coming months. But this is an entirely different, record-spinning figure. With influences such as funk daddy, Bootsy Collins, Boots is sure to entertain. — Sidney Johnson

Mary J. Blige at Music Hall at Fair Park
The President of R&B comes to town. Listen as she breaks glasses when she hits those high notes. — OM

Pee-Wee’s Big Adventure 35mm at Texas Theatre
Will Pee-Wee ever get his little red bike back? Only one way to find out. — OM

Oh, Weatherly at The Dirty 30
The local pop/punk rock outfit headlines this punk show about two months after the release of its latest EP Long Nights and Heavy Hearts. Forever Starts Today, Beneath the Waves, Dear Rachel and more perform. — AC

Yoga N D Hood: Erykah Badu Edition at Opportunity Park
A free yoga lesson with the sounds of one of Dallas’ greatest musical artists. Bring your own mat and stretch out and then join the Urban Health and Wellness Expo hosted by the City of Dallas and Yoga N Da Hood. — OM

A.CHAL at Three Links
The Peruvian R&B singer released his latest album ON GAZ back in June. In it he continues his usual blend of hip hop, R&B and sounds of his native Peru. You can stream that album right here. — OM

Locked & Loaded: Talkies, Fun Button, Xuan at Armoury, D.E.
Talkies is driving right up I-35 from Austin to bless the stage with its pop rock tunes. They’ll be joined by Fun Button of Denton. King Camel hosts this free showcase. — OM

Lady Antebellum at Starplex Pavilion
It’s been 11 strong years for this pop-country trio. The Nashville crew is on its “You Look Good” World Tour in support of its January 2017 album Heart Break. — OM

The Goonies, The Sandlot Double Feature at Coyote Drive In Lewisville
Do the Truffle Shuffle and throw like a girl before you come to the drive-in so as to not disturb your fellow moviegoers. — OM

Community Outreach at El Palote Panaderia
The Arias family over at El Palote is passionate about bringing vegan dishes that are a healthier take on standard Mexican dishes to the community in Pleasant Grove. Join them as they give away free samples of their food and provide some information about veganism. — OM

Slow Dreamer at The Prophet Bar
T he synth-pop crew from Oklahoma hits the Prophet Bar ready to craft dreamscape sounds. Matthew And The Arrogant Sea of Denton opens the show. — OM

Beetlejuice & The Sandlot at Coyote Drive-In Lewisville
No, it’s not a Beetlejuice-The Sandlot mash-up that we all want, but a double feature, which is still just as good because you can’t really go wrong with these two childhood classics. — OM

Subculture: Samma Lone’s Birthday with TX Connect at Off The Record
Celebrate Samma Lone’s birthday when the clock strikes midnight and enjoy $3 shots of Jameson and Tito’s Vodka. — OM

The Texas Massacre Mini Tour at The Dirty 30
Worry not. Old Leatherface won’t be making an appearance at this gathering of Soundcloud rappers and beat makers. But OmenXIII, GRAVEYARDBOYZ and plenty others will take the stage to get things poppin’. — OM

Under Oblivion at The Rail Club
Under Oblivion will be celebrating  the release of its latest EP with Backtalk, Trials of Man, ViaVersus, Orchards, Humannequin and Drown This Kingdom. — OM

Deep Ellum Water Balloon Wars
This is an adults only event, so leave the kids at home. Proceeds from this event will go to Foundation 45, a group that helps artists and musicians from Dallas get access to mental health services. — OM

Paint, Wine & Chocolate Class at CocoAndre Chocolatier
Bring your own beer or sip on some wine as you learn how to make cactus-shaped chocolate pops. Class will be taught by local artist IRIS Candelaria. — OM

Tarrant County March For Love Not Hate at JFK Tribute in Fort Worth
Time to get your steps in as you march for love and equality. Last weekend’s demonstration in Dallas proved quite positive, so maybe North Texas can keep up this positive trend of arrests-free rallies. — OM

The Purge Swap Meet at The Church
Clean out that closet and come ready to trade all the thigns your don’t wear or use anumore for things that you might actually want to wear and use. — OM

AQUA: Two Friends at SiSu Uptown
T he two friends you never knew you had have remixed hits like Blink-18s’s “I Miss You,” Fetty Wap’s “Trap Queen” and The Killers’ “Mr. Brightside.” Check out what else they’ve got in store for you at this daytime dance party. — OM

Sunday Medication with DJ KMOR at Drugstore Cowboy
Drinks are 25 percent off at this weekly show that runs from 2-6 p.m. This week’s featured guest DJs are DJ So4kis and Lil Starzza. — OM

The Speedlights and Brunch at Dan’s Silverleaf
After Denton locals The Speedlights finish up their set of pop rock tunes, Chef Pam Chittenden will serve up a tasty brunch of smoked salmon, scrambled eggs, balsamic potatoes and more… — OM

Lines of the Body Workshop at J. Erik Jonsson Central Library
This workshop led by the Danielle Georgiou Dance Group is all about letting your body be the canvas as you find new shapes and figures your body can form through dance. Attendees will take home a free photograph of their creations. — OM

Noogy at Three Links
Five bucks gets you in to see this line up of Noogy, American Minority, Hate for State and Bullet Machine. All punk, all night long. — OM

Decapitated at Gas Monkey Bar N Grill
There will be no shortage of head banging when this Polish death metal band that gained notoriety in the ’90s for its incredibly young lineup takes the stage. Decapitated will be joined by touring partners Thy Art is Murder and Fallujah. — OM

WNV Nation at The Curtain Club
WNV Nation has been blending electronic music with indie rock, alternative rock and underground dance music since the ’90s, so make sure to bring your dancing shoes to this standing room-only show. — OM