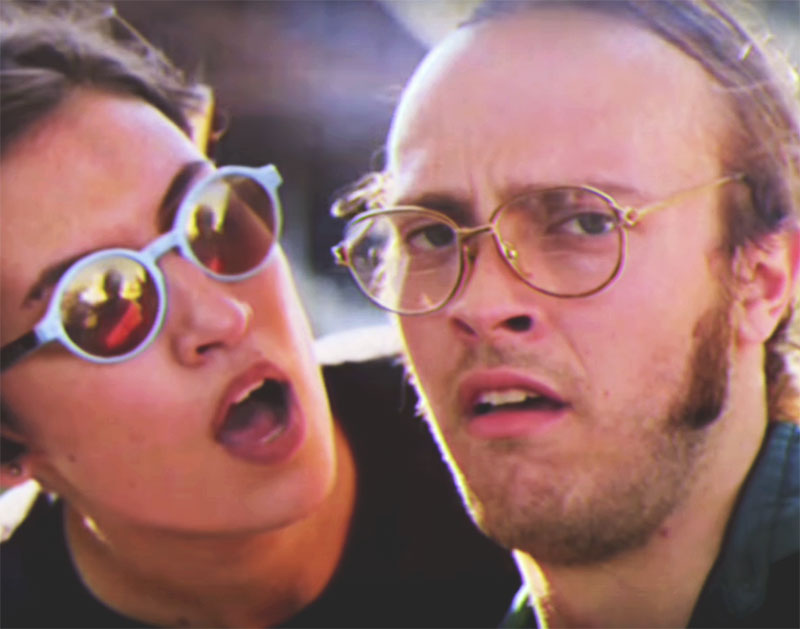 The Texas Gentlemen – “Bondurant Women”
RIYL: Trucks, trucks, trucks!
What Else You Should Know: In preparation of the release of their debut album, the fast-rising Texas Gentlemen have put out a string of impressive music videos this summer, each with its own whimsical nature. The latest of these promotional clips is for the song “Bondurant Women,” and it maintains the ’70s vibe of the band’s sound. But it’s also just about as soulful a song as we’ve heard from the group to date. Also helping matters is the fact that the video is a truly hilarious, campy take on a small-town car dealership competition. This all bodes well for the anticipated release of TX Jelly, which is right around the corner with a release date of September 15 via New West Records.

Pearl Earl – “Meet Your Maker”
RIYL: Acid trips.
What Else You Should Know: This song’s been out for a few months at this point, but the video is brand new, which gives us — and others — an excuse to revisit it. Earlier this week, the Denton quartet told the Dallas Observer about how this song is “written from an alien’s perspective, looking at humans through a lens, asking questions of ‘Why is society so skewed?’ and ‘Who is the maker of the people like that?’” That helps explains the out-of-this-world visuals for the track from the band’s July-released self-titled LP.

Pat Ron – “Left N Right”
RIYL: Deviating from the norm.
What Else You Should Know: Pat Ron has developed quite the reputation both locally and across the internet as as a stoner rapper. But if that seems like a slight, it’s not. Nearly all the tracks we’ve heard from the sharp lyricist are steeped in weed references, and they typically possess a drowsy, slow-tempo beat. But this song is different. On “Left N Right,” we get to hear the rapper on a new style of beat — and he adapts admirably. The weed references are still there, sure. But it’s a good sign to see that a rapper we already dig has even more to offer than we initially thought.

Diego Money – “In Da Streets (Feat. TrapBoy Freddy)”
RIYL: When Soundcloud meets the streets.
What Else You Should Know: At some point during the rise of the platform, being a “Soundcloud rapper” became a pejorative term. But there’s no denying that a number of big-name artists that we all know today got their start on the online platform. Diego Money understands this; Soundcloud is the world in which he operates. It’s definitely not the world in which TrapBoy Freddy works, though. He comes from the other popular Dallas rap route, pushing his music in the streets and at classic establishments like T Town Records. So it’s cool to hear these two opposing worldviews come together on “In Da Streets,” a wonderful pairing of two factions that we’d like to see working together more frequently.

GrantClass – “Cartoon Kid”
RIYL: Watching cartoons on Saturday morning… in your 20s.
What Else You Should Know: We should all be able to relate to this song from GrantClass, a Texas Tech student from Fort Worth. Over the course of the lighthearted track, the rapper references dozens of shows both new and old in a lyrical exercise that never comes off a too campy.

FlexinFab & Dro Fe – “Same Gang”
RIYL: Finding commonalities in unlikely places
What Else You Should Know: At first blush, Dallas artist FlexinFab and Rio Grande Valley rapper Dro Fe might seem like an odd pairing. But all that goes out the window once you see them cruising in the back of a convertible, making it rain out of a Supreme money gun. The two actually have a great chemistry, with Fab’s AutoTuned glam rap complementing Dro Fe’s rough-and-tumble persona in a song that show’s Fab’s potential to collaborate with artists outside the city.

Two Knights – Effing
RIYL: Mixing math rock with emo lyrics.
What Else You Should Know: This six-song EP marks the first release in three years from this Denton band, and while it’s rife with downtrodden emo lyrics, it’s not bogged down by slow-tempo’d somber instrumentation. Instead, Two Knights couples its troubles with smart and sharp progressions, plus time changes that keep the listener engaged and show off the band’s considerable talents.

Curtis Mayz – “Ain’t No Love (Feat. Deniro Farrar)”
RIYL: Prospering among the heartless.
What Else You Should Know: Just like the aforementioned Diego Money and TrapBoy Freddy collab and FlexinFab and Dro Fe team-up, this is another collaboration we’re excited to see. Here, hard-working Dallas emcee Mayz links up with North Carolina rapper Deniro Farrar — a solid name in the hip-hop blogosphere for several years now — and it’s a wonderful pairing as their voices and lyrics come across as decidedly earnest on this grim track. Here’s hoping for more collaborations between Dallas artists and others from around the country.

ArraDon – “After Christmas”
RIYL: Bangers for the holidays.
What Else You Should Know: Everything about this song is heavy. From the trudging beat featuring a twist on Christmas carols to ArraDon’s booming voice, this is just a no-frills banger. Couple it with ArraDon’s part on “5T’s” last month, and it’s clear that the dude has been on a roll as of late.

Jay Fresh – “Whole Lotta”
RIYL: Having too much and not sharing.
What Else You Should Know: This is the kind of song that stops you in your tracks and makes you pay attention. Fresh’s delivery is authoritative and booming with a bass line to match.

DJ Snake — “Oak Cliff Ready”
RIYL: Shouting out your favorite hood.
What Else You Should Know: Featured prominently in the ESPN 30 for 30 documentary What Carter Lost that premiered on the cable giant last night, this song comes courtesy of one of the local scene’s heroes of that time, DJ Snake, who helmed the popular rap group Nemesis, and features Rakim Al-Jabbaar on guest vocals. Fun fact, these two are also working these days on a sort of Nemesis 2.0 project featuring other area emcees of Al-Jabbaar’s generation collaborating with Snake. This is an early taste of that effort, and while it’s not quite on the same level as Young Nino’s “Oak Cliff That’s My Hood,” it’s got a lot of the same flavor that turned that other song into a classic.