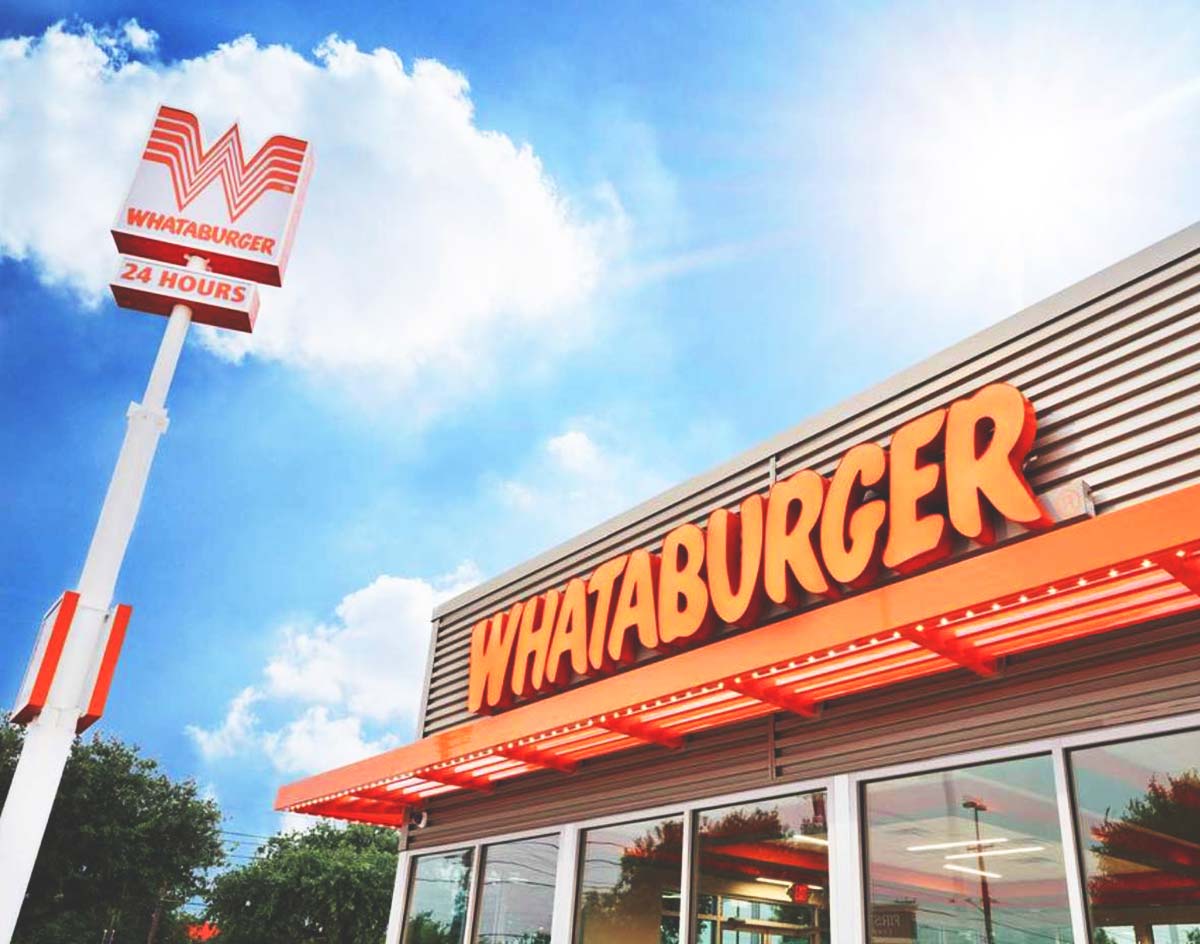 Lakewood Gets A Whataburger, Vaccinated Folks Get Free Kripsy Kreme, Boozy Topo Chico Gets A Release Date, Vidorra Serves Up An 18-Inch Taco And Much More.

After its 2019 sale to Chicago investors, many a Texan expressed concern that outside influence could result in changes for the beloved state-born fast food joint Whataburger. But even as the brand has expanded across state lines — most recently setting up shop in Kansas City and Nashville — there really haven’t been too many noticeable differences.

Lakewood residents are about to see one, though: It was confirmed this week that the neighborhood will be getting its first-ever Whataburger with a new location that will open at the intersection of Gaston Avenue and Tucker Street by spring 2022. With a set-up just a skipping stone’s toss south of White Rock Lake, reps with the 800-plus-location chain tell the Lakewood Advocate that the new spot won’t feature a traditional A-frame look but will inside boast a design made with the neighborhood in mind.

Speaking of being a good neighbor: The Dallas Morning News reports that 1o Krispy Kreme shops in North Texas are giving one free glazed doughnut to anyone who shows off their COVID-19 vaccination record card at the register. The offer is valid until December 31, 2021, for qualified guests, which include those who have received at least one or two shots of the Moderna or Pfizer vaccine or one shot of the Johnson & Johnson vaccine. But, wait: What if you don’t want to get vaccinated, and you still want a free doughnut? Well, Krispy Kreme recognizes that’s your personal choice and advises their guests to consult with a healthcare provider about that decision — but they’re also offering a free glazed doughnut and a medium brewed coffee to just any ol’ schmoe every Monday between March 29 to May 4.

Speaking of coffee: Dallas has been booming with new coffee shops opening up lately, and it’s not stopping!

The Chicago-based Fairgrounds Coffee & Tea will open in Highland Park — its first ever Texas spot — on March 24. Eater reports that the coffee shop has a dozen different types of coffee beans from craft roasteries from all over the world — plus kombuchas, juices, teas and more.

Another coffee spot making headlines? Berni Bean Coffee Company. D Magazine has the beat on the rainforest-themed Costa Rican coffee shop that recently set up in Downtown Dallas. A fun fact about the spot: It donates a percentage of every purchase toward rainforest protection. It also some interesting roasts options, looks like,

Not a coffee enthusiast? Don’t worry; there are more drink options coming your way starting off next week.

After announcing it last year, the Molson Coors Beverage company now says it will begin distributing boozy Topo Chico in Dallas on March 29. The Dallas Morning News reports that the 12-ounce, 100-calorie cans of Topo Chico Hard Seltzer will be sold in all major grocery stores, and that they comes in perfect summertime flavors including tangy lemon lime, exotic pineapple, strawberry guava and tropical mango.

Unlike Topo Chico, a new Dallas vegan chocolate shop is following the heath-focused, sober-curious movement with the creation a new “sober bar.” Wicked Bold Chocolate, which is set to open in Flower Mound next month, seeks to create healthier alternative for addictive options. Its handcrafted vegan chocolate is made with organic and ethically sourced cacao from Belize and made with three ingredients — but it doesn’t stop there. As the DMN notes, Wicked Bold is also bringing non-alcoholic craft cocktails into the mix as it expands into a vegan restaurant.

Meanwhile, in the Cowboys’ home-away-from-Arlington of Frisco, a new Texas-German steak restaurant and beer garden is set to open next month. Per CultureMap, Hoff’s Steak & Stein promises Texas cuisine inspired by German classics (including craft beer) and a menu set to include sandwiches, salads ribs, wurst plates, steaks and more.

The Oak Cliff-sprung and Irving-based 7-Eleven is trying something new out, too. After having opened up its first “Lab Store” concept with an in-house Laredo Taco Co. in West Dallas back in 2019, the convenience store chain this week announced plans to try out a new “Evolution Store” concept near Lake Highlands at Park Lane and Abrams Road. Per Dallas Innovates, this spot — the first of its kind in the states — features a drive-through Laredo Taco Co. where customers can also purchase additional in-store beverages. There will also be an indoor seating area.

Staying on the tacos tip for a minute: Shout out to CraveDFW for bringing Deep Ellum restaurant Vidorra’s 18-inch taco called “El Jefe” to our attention. Big enough to feed six people — or maybe just a hungry solo diner? — it’ll cost you $28.

Finally, let’s end this week’s notes with some sad news that we couldn’t help but put off mentioning here until the end. As we’ve already noted elsewhere, Dallas diners lost two favorites this week as the Uptown craft beer-pioneering spot The Ginger Man was bulldozed and the East Dallas seafood standout 20 Feet Seafood Joint shuttered its doors for good. It’s so sad to lose such beloved spots so deep into this pandemic — especially when the end is in sight.

We’re so ready to get past COVID-19 for good.