The Life And Death Of Dak’s Sunken Place Mural In Dallas. 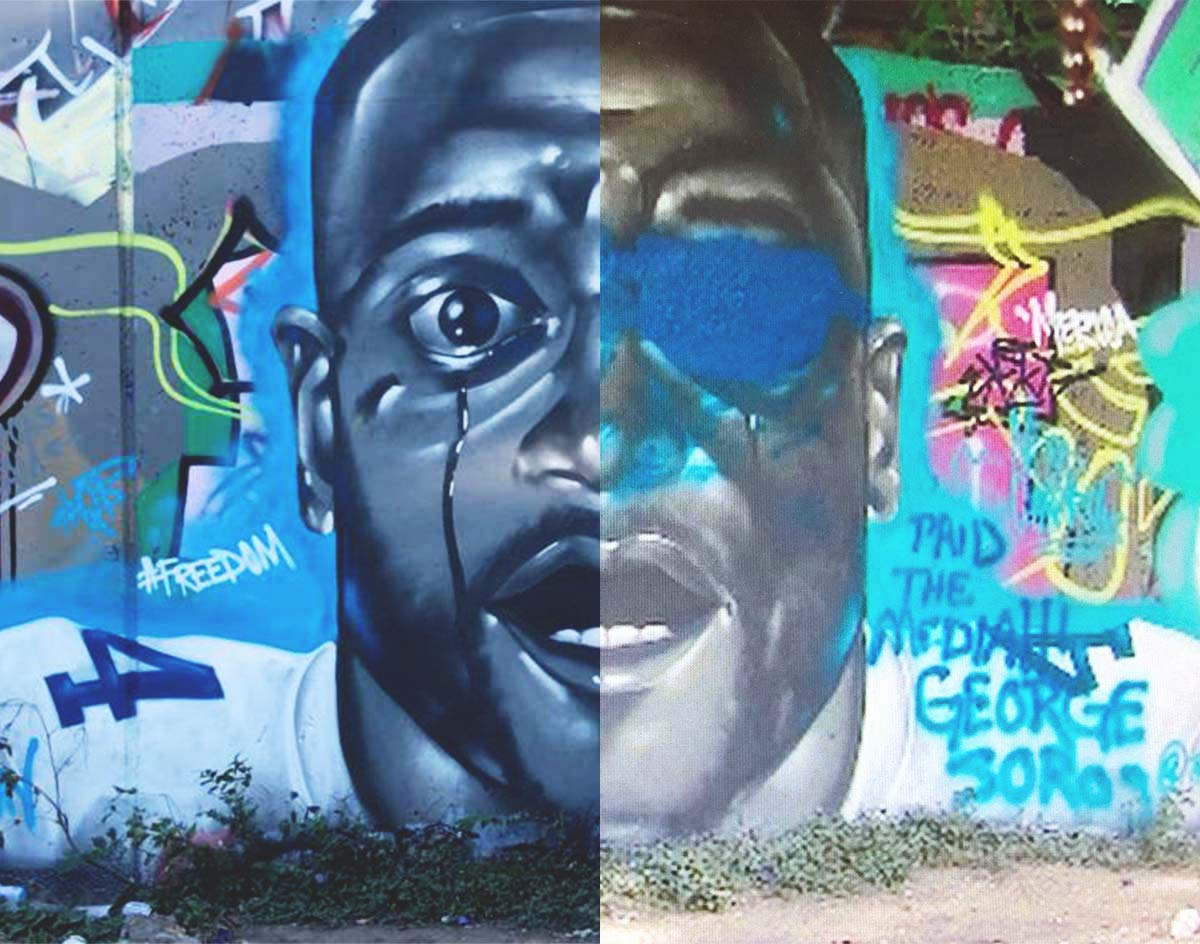 Right After The Media Found Out About A West Dallas Mural Placing The Cowboys’ QB In Get Out’s Sunken Place, It Was Defaced. No Worries, Says The Artist.

Update at 4:52 p.m. on August 7, 2018: The below story has been updated to reflect that the mural at the center of this story has now been almost completely covered up, just a few days after it was first posted. What they say is true: Life comes at you fast.

Over the weekend, Arlington’s Trey Wilder received the kind of national press that most artists can only dream of these days.

Everyone from Complex and The Source to Yahoo! and The Sporting News was reporting on his art, dropping his name while debating the merits of his latest work — a piece he’d painted at The Fabrication Yard in West Dallas, one of the city’s only so-called “free walls,” upon which anyone can (quite literally) leave their mark. The piece in question was a biting piece of social commentary that itself referenced another piece of modern cultural criticism: Wilder’s mural, erected late last week, featured Dallas Cowboys quarterback Dak Prescott standing in for Daniel Kaluuya’s character during one of the most memorable scenes from Jordan Peele’s powerful 2017 film, Get Out.

Had to drive by myself and see it in person. It’s real. pic.twitter.com/Dmzl3LMBvM

Wilder’s inspiration for the mural came from a sequence of events that even the most casual of Dallas Cowboys haven’t been able to avoid in recent weeks — Jerry Jones’ comments about how “his” players would stand for the national anthem no matter what the NFL said, Prescott’s subsequent comments that he doesn’t think the anthem is the right time to protest anyway, and the the public’s reaction to those comments from Dak, with many on social media demonizing Prescott’s actions and a slew of conservatives, including one-time Dallasite Tomi Lahren, praising him.

Count Wilder among those taken aback by Prescott’s statement that he would not kneel during the anthem.

“I was just thinking about some of the scenes in [Get Out] where the guy was hypnotized, and that’s what I believed [Prescott’s] remarks seemed like,” the 29-year-old Wilder told the Dallas Morning News on Sunday, noting that he was inspired to paint his mural based on a segment he’d heard on “The Breakfast Club” last week in which Charlamagne Tha God clowned on the Cowboys QB and named him his “donkey of the day.”

Thing is, Wilder’s mural becoming national news hasn’t changed much. If anything, it’s only emboldened those who disagree with his reaction to Prescott’s national anthem comments — a stance that Prescott has since reiterated, with more and more media members rushing to defend him as time has gone on.

Perhaps it’s no surprise at all, then, that within hours of Wilder’s mural earning national press, it was defaced, with an anonymous vandal having painted blue sunglasses over the Prescott’s eyes in the mural and added a note implying that the mural was paid for by the media and by George Soros, the billionaire that those on the far right of the political spectrum often accuse of acting as the puppet master funding any and all action taken by the left:

A day later, the Dak mural has been heavily altered pic.twitter.com/0ZCXscTFWq

(Yes, defaced is the proper term here. A note to the perennially out-of-touch Dallas sportswriter Mike Fisher, who defended the vandal of Wilder’s mural by accusing Wilder of himself “defacing” the free wall upon which his mural was placed: You can’t really deface a wall owned by someone who encourages people to paint it with whatever they so choose.)

Now, not even 72 full hours removed from Wilder’s work gaining national attention, it has been almost completely covered by the work of yet another artist — this time from someone who placed a tag on top of Wilder’s creation instead of just altering what had previously been on the wall.

The Dak Prescott mural is now completely covered up. pic.twitter.com/cCE5Y8Cg5s

For his part, Wilder is taking the quick erasure of his artwork in stride.

“Naw, ’cause that’s what happens at the yard,” Wilder said when reached for comment about whether he was upset to see his work get tagged over by someone else. “Besides, it’s already left its mark.”

That much is certainly true: The image Wilder crafted indeed sparked the debate he hoped it would, all while reaching a wider audience than he could’ve imagined.

And to be clear, he says, it was very much his message — not some shadowy billionaire’s — on display in West Dallas. In ever plainer terms: He outright denies that George Soros, or anyone else for that matter, paid him for his work.

“No!” Wilder says of that notion. “Don’t start that trap game.”