The Cocktease: The Pukiki Park At Swizzle. 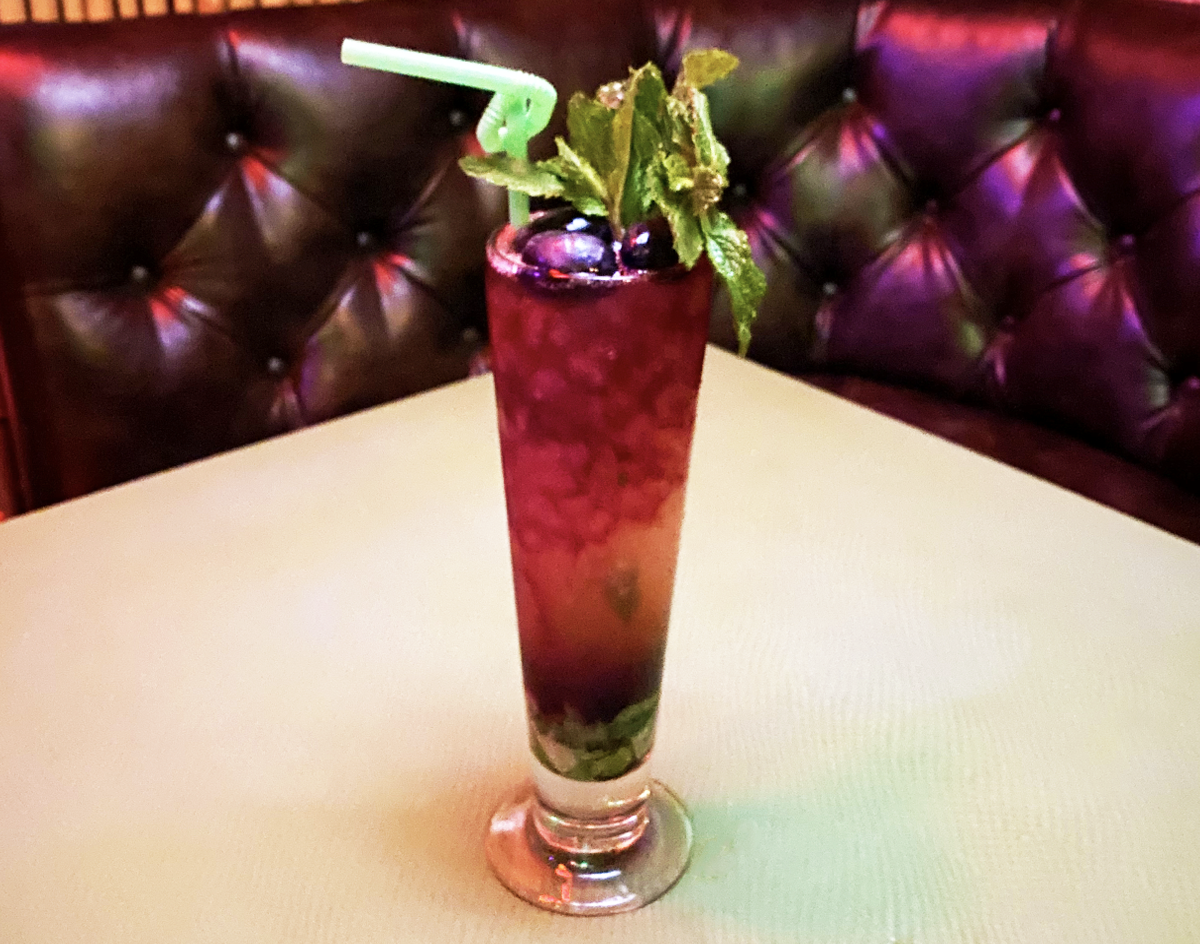 Welcome to The Cocktease, the weekly feature in which we present to you a tasteful preview and review of a cocktail in the Dallas-Fort Worth region that deserves your attention, your mouth and your monetary support. Looking for a good time? Here’s something that might fit your personal tastes — because when I sip, you sip, we sip.

Name: Pukiki Park.
Where to get it: Swizzle (1802 Greenville Ave #110, Lower Greenville).
Cost: $13.
When to order: when you’re wishing you could in a pineapple under the sea.
Ingredients: Mount Gay Black Barrel Rum, Aguardiente, passion fruit, lime and port wine.
Pairs well with: a designed driver.
A little more to sip on: If you’ve ever had dreams of downing a cocktail in Bikini Bottom, a trip to Swizzle will make your childhood dreams come to life.

OK, listen: We’re not trying to be controversial but it’s hard to discuss Dallas’ tenuous tiki bar obsession and not address some controversy.

There’s much debate about the culture of tiki bars — like, for instance, if it’s a fetishization of Southern Pacific culture or, maybe even worse, the result of Polynesian erasure.

It’s important to note that, in many circles, “tiki culture” is regarded as more of an art movement following it’s popularity in post-World War II era life. After soldiers stationed in the South Pacific returned back home, they brought back some elements of the “exotic” countries that they themselves had only experienced for the first time — such as bamboo, palm trees, carved wooden statues and, of course, strong rum-based cocktails.

Swizzle, though, is more than that.

Rest assured: No matter what you think you know, this new Lower Greenville destination — one of the best new bars to open in Dallas in 2020 — will have you leaving better than you came in. It’s a spot that offers both tropical oasis and educational experience, a place that prides itself on not only its inventive cocktails but on ensuring that the culture and origins of its aesthetic don’t go unnoticed — or, worse, erased.

For a bar that took nearly four years to open, there was a lot of time spent making sure that Swizzle would do tiki justice — and the folks behind this spot delivered on their promise. 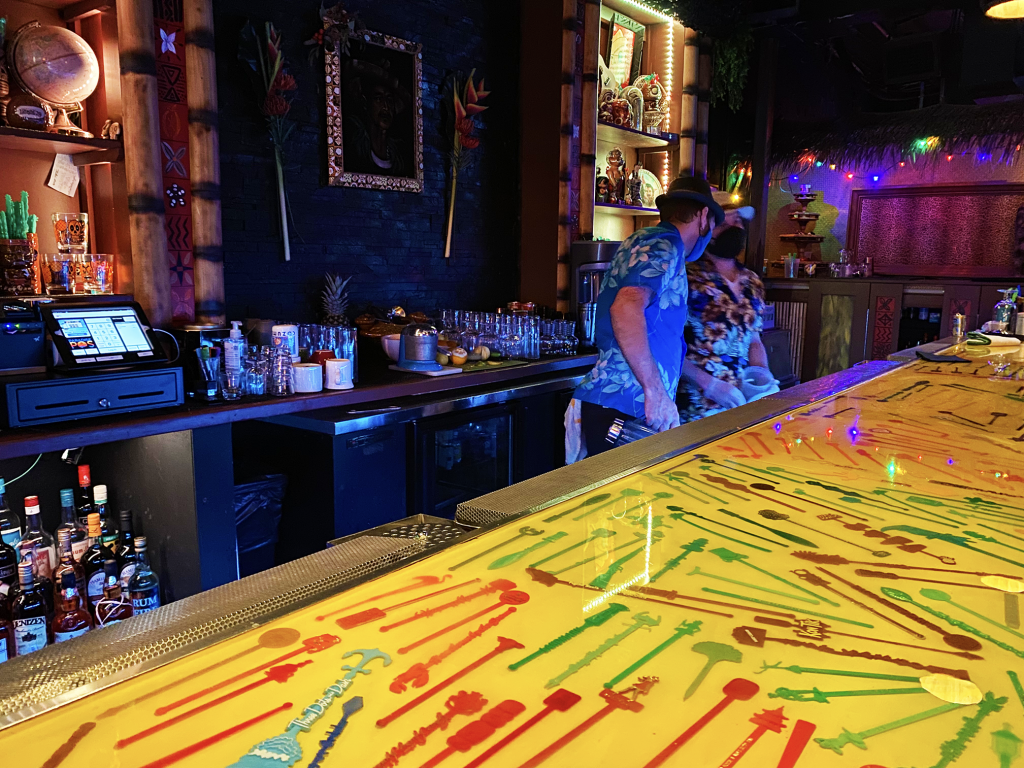 The cocktail menu features a strength chart designed to help you carefully choose your rum-filled escape. Next to each item, guests will find swizzle sticks in counts from one (“Welcome aboard!”) to four (“I’m calling an Uber…”) — so, naturally, we went ahead and tried a four-swizzle stick cocktail on our most recent visit.

And let’s just say that the drink they call Pukiki Park does not play.

First off, the presentation is a spectacle unto itself. This cocktail arrives in an extra-large vessel that looks a lot more like a bouquet vase than a cocktail glass — and, hey, no complaints there!

Still, if you’re looking for a classically sweet tiki cocktail like the universally beloved Mai Tai, the Pukiki Park won’t scratch your itch. I’d recommended instead for those moments when you need to be humbled. Just when you think you know tiki, the Pukiki Park flips the script; it brings a sour and tart quality you’d never expected in a tiki drink, all while displaying the fabulous and wide-ranging dynamics of the culture from which it has sprung.

Of course, the Pukiki Park — much like its other cocktail siblings on the menu — would not be complete without an iconic and extremely necessary bright orange curly straw nestled between herby garnishes and perfectly dropped into a sea of colorful liquid, right atop some delicately crushed ice.

The environment only adds to this drink’s appeal. As you’re slowly sipping your gargantuan cocktail, you’ll notice a carefully curated playlist of South Pacific sounds emanating from the speakers — a fine and necessary finishing touch to the immersive staycation-in-a-glass experience.

It’s you’re in need of a staycation — even one simply presented in a glass — you’ll be hard-pressed to find a more satisfying journey in Dallas than what sipping on the Pukiki Park provides. 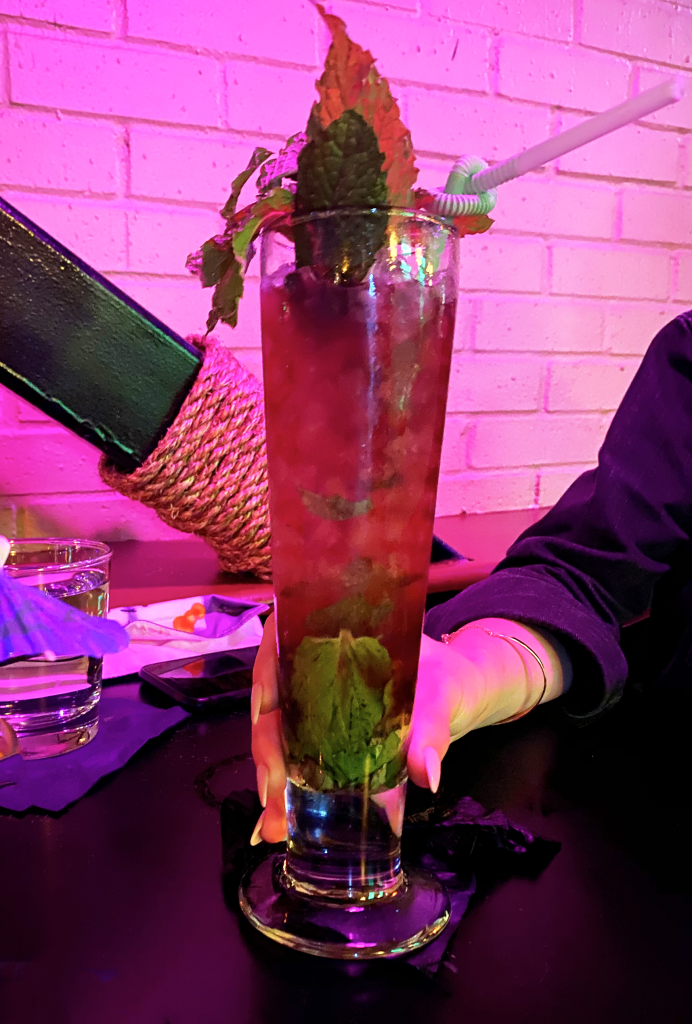