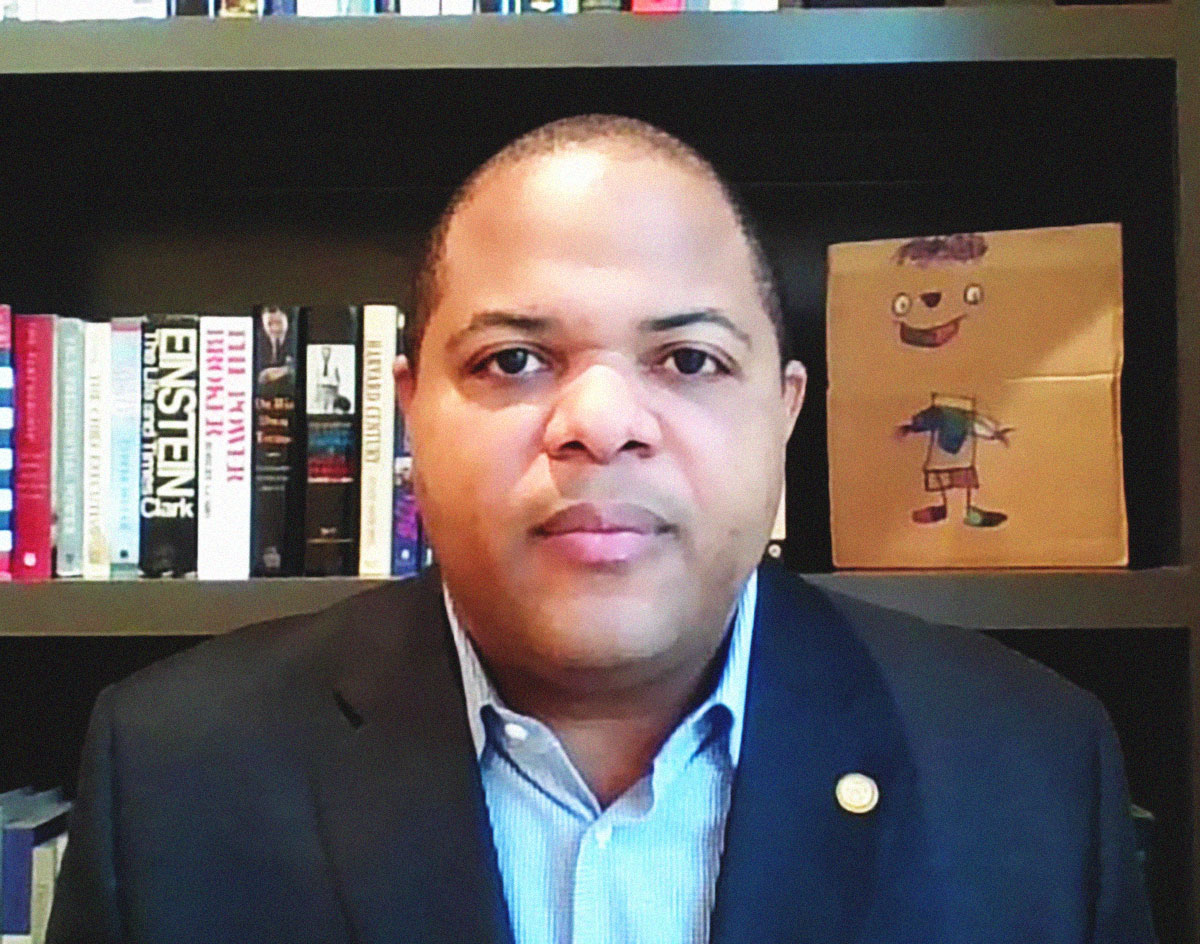 What Information Can We Glean From The Curated Book Collection That The Mayor Displays On The Bookcase Behind Him In Televised Interviews?

In the comfort of his home, he sits in front of a black bookcase and speaks about a range of issues — from catering to Gov. Greg Abbott’s calls to reopen the state to mischaracterizing protesters and pretending not to understand what defunding the police means.

The actual substance of these interviews only tells part of the story of Johnson’s personality. The background he chooses — his home office’s bookcase and its contents — reveals just as much about who the mayor is.

It shows how he curates his public image, and how he perceives himself.

As people began sheltering in place at the outset of the coronavirus pandemic, teleconferencing took off. Zoom and other applications became an extension of home and social life. As such, as we all know, it’s forced some of us to rethink our interior design choices.

Hey, no one wants the background of their video call to show off a haphazard hellscape of neglected dirty clothes and used dishes after an extended Netflix binge.

The go-to background option for many who are appearing on television regularly of late is a well-stocked bookcase. It’s a prop that’s become almost obligatory for every person who wants to portray themselves as important.

But it’s what’s on these shelves where the real magic happens. Dallas Mavericks owner Mark Cuban has the Larry O’Brien trophy sitting behind him on a bookshelf in his wood-paneled office. Former Vice President and presumptive Democratic presidential nominee Joe Biden has an immaculately crafted one — dotted with all kinds of Americana — in his basement, which we can only hope he refers to as the Biden Cave.

This choice of décor serves a purpose. As Amanda Hess notes in her New York Times piece on the subject, a well-stocked bookcase lends “a patina of authority to their amateurish video feeds.”

Mayor Johnson’s bookcase is no different.

SEE ALSO:
• WHERE’S THE DALLAS MAYOR: CAN YOU FIND ERIC JOHNSON? // Other Area Politicians Are Making Themselves More Visible During The Coronavirus Pandemic, But Dallas Mayor Eric Johnson Is Really Tough To Find!
• CITY COUNCIL SESSION SHOWS LACK OF LEADERSHIP IN DALLAS. // Friday’s Eight-Hour Special Session About Protests And Police Accountability Left Dallas Citizens With More Questions Than Answers.
• REMEMBER YOUR DALLAS OFFICIALS? THEY CAN CHANGE THIS. // Contacting Officials Is One Of Many Ways You Can Demand Change In Our Law Enforcement System On A Local Level. Don’t Let Them Drag Their Feet.

The books it holds serve to reinforce the notions power, authority and leadership that he feels his position carries, even though Dallas is a weak-mayor system and it can be argued that he’s done more to sew division than lead and unite the city in his first year in office.

But, hey, it’s his house and he can decorate it however he wants for the camera.

So, what are the books he chooses to display in his interviews? A request for a full list from his office went unanswered, naturally. But through some sleuthing — mainly watching videos of his TV appearances and zooming in on image stills — it’s possible to make out most of the titles, even if not all the spines are legible.

Still, we can confirm that Johnson keeps on his shelf copies of the following:

Sure, these books are found side-by-side with a more affectionate touch to Johnson’s shelves — artwork and cards from his children, which carry their own weight and symbolism in showcasing the mayor as a loving father.

But the Mayor’s book collection is the real chef’s kiss of it all. These titles read like a celebration of American hubris: works about mercurial, misunderstood geniuses: books on powerful, vindictive figures who built their careers through manipulation like LBJ, Robert Moses and Nelson Rockefeller; studies of Abraham Lincoln, the presidency and White House; a biography of a former Supreme Court Justice and member of the Ku Klux Klan; a book about Dallas (but just one and certainly not Jim Schutze’s The Accommodation, which now has a dedicated Twitter account tweeting it out in its entirety 240 characters at a time); and, of course, a book about Harvard.

Did you know Johnson went to Harvard? He doesn’t mention it very often.

Listen, it’s axiom to associate the names on Johnson’s shelf with greatness and power in American society. And, make no mistake, these books are all there intentionally.

Not only is the mayor showing his deep admiration and study of these men, who are as much draped in legend as they are myth, but he’s also telegraphing his ambitions to one day be associated alongside their accomplishments in the annals of American history, for better or worse.

The inclusion of Caro’s works on LBJ and Moses provides even deeper insight to how he practices interpersonal politics. Rumors have swirled since Johnson took office that he is simply using his mayorship as a stepping stone for higher office, and his book selection lays bare those aspirations.

Think about what Johnson is projecting with these books — and also how he’s doing so, having given three interviews to CNN now in the last few weeks.

Semiotics, we assume, is a required course at Harvard.