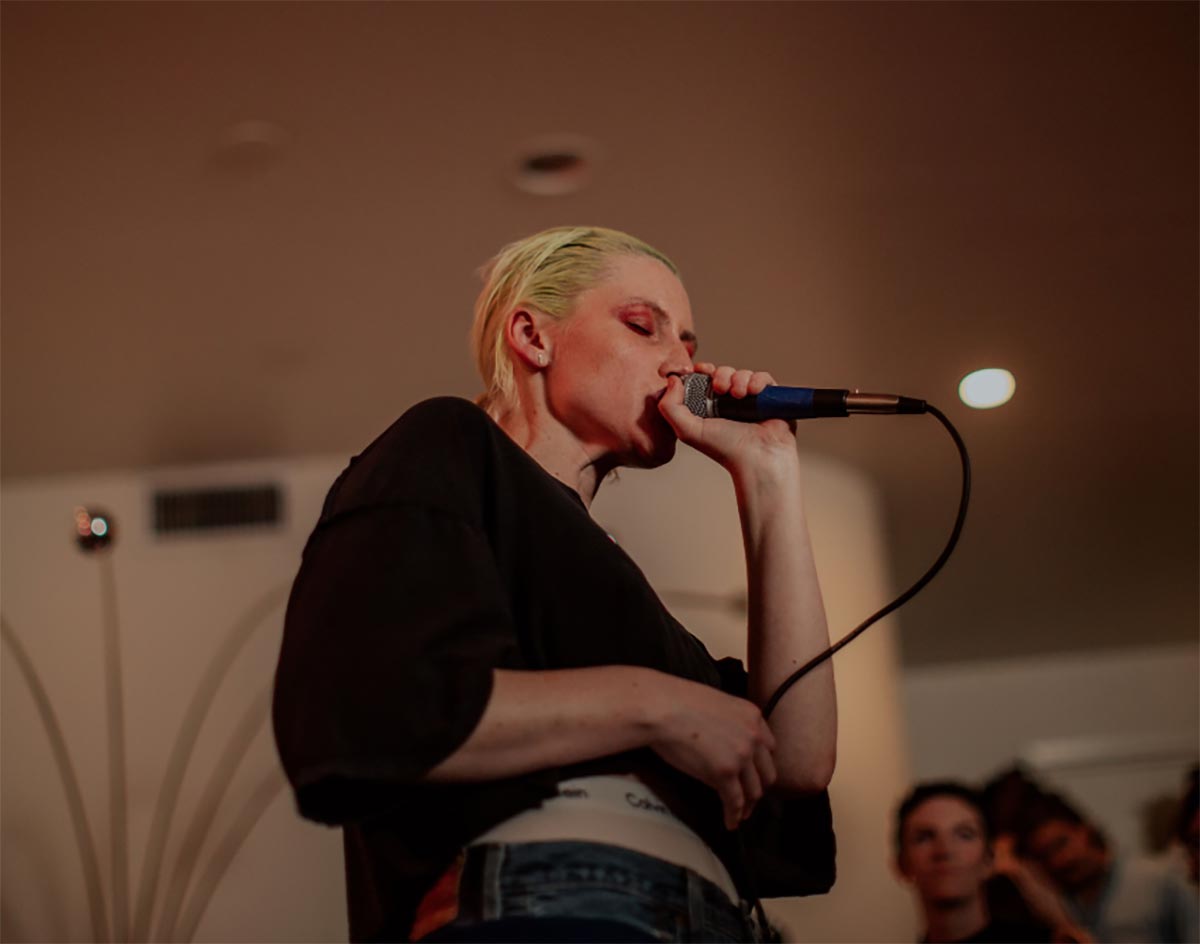 Feel Different With Sarah Jaffe, Laugh At Irony With Alanis Morissette, Stick It To Anti-Vaxxers With Jason Isbell, Fight For Good With Rise Against & More.

Another week, another celebrity half-heartedly apologizing for something ignorant that they said.

As you’ve no doubt heard by now, the rapper DaBaby spewed some homophobic and misogynistic rhetoric during his set at Rolling Loud in late July — and, in addition to being truly gross and ignorant, it was unprovoked and very strange.

You could’ve just finished your set, man! Not sure why you had to bring up sucking dick in parking lots.

“If you didn’t show up today with HIV/AIDS, or any of them deadly sexually transmitted diseases that’ll make you die in two to three weeks, then put your cell phone light in the air,” he said at one point, showing off his true homophobic colors, spreading misinformation, exacerbating stereotypes and making light of a debilitating disease, all in one weird sentence.

He also asked the ladies of the crowd to put their cell phone lights in the air if their, uh, genitals smelled like water? So, it turns out, Da Baby doesn’t know how the female body works, either.

What followed was a lot of backtracking and forced apologies on his Twitter and Instagram accounts in an attempt at damage control after getting dropped from various other festivals to which he’d been booked this year.

“Social media moves so fast that people want to demolish you before you even have the opportunity to grow, educate and learn from your mistakes,” he said in an attempt of defense at his actions.

Here’s your first tip in PR apologies, DaBaby: Don’t make yourself out to be the victim.

As if that weren’t enough, he also shifted the blame on a vague team of people, saying that “having people I know publicly working against me — knowing that what I needed was education on these topics and guidance — has been challenging.”

Yes, shame on the people for not teaching this 29-year-old man about HIV.

Anyway, if you’d like some resources on HIV/AIDS treatment, prevention or education, the CDC has you covered.

As for us? We also have this week’s lineup of top events in and around Dallas — a collection that starts off with a queer music festival. Why? Because we should be uplifting our LGBT+ peers, not tearing them down. — Frances Tingle

Queer M.F. at Main At South Side (Fort Worth)
This music festival — that’s what the “M.F.” stands for in this case — started in Austin in 2016, and it aims to give a platform for LGBT+ and allied artists to celebrate what makes their community so wonderful. The lineup at this offering includes songstress Sydney Wright and duo Pls Pls Me, plus NYC comedian Dan Frank as the night’s master of ceremonies. — FT

The Black Crowes at Dos Equis Pavilion
By pursuing more of ’60s influence, this popular ’90s outfit was able to help push the American rock scene out of its grunge obsession. Now hitting on the road as part of their “Shake Your Money Maker Tour,” the once-feuding Robinson brothers are back in the saddle, proving that at least some of the squabbles from their younger years can indeed be mended.  — Alexis Castillo

Jason Isbell and Lucinda Williams at Billy Bob’s (Fort Worth)
Three-time Grammy winner Lucinda Williams joins four-time Grammy winner Jason Isbell at this southern-rocking affair that you better not even think about attending without proof of vaccination or a recent negative COVID test. Update: After initially being set to take place at Panther Island Pavilion, this show has been moved to Billy Bob’s. Vaccination rules still apply. — AC

O-Town, Lance Bass, LFO & More at Lava Cantina (The Colony)
Remember when boy bands ruled the world? Also, remember Y2K, when everybody thought the world was going to end? Well, we can’t promise what the hands on the Doomsday clock look like at this one, but we can tell you that you’ll be able to watch one-fifth of *NSYNC, hometown boy Ryan Cabrera and a bunch of other turn-of-the-millennium acts who were screwed by Lou Pearlman at this one. — AC

Alanis Morissette, Garbage and Cat Power at Dos Equis Pavilion
Unfortunately, Liz Phair has canceled her appearance as part of this tour package, which still just the same features the ever-grateful Alanis Morissette, the still youthful Garbage and a mentally healthier than ever before Cat Power. Lilith Fair may be no more, but its legacy lives on with this one. — AC

Edie Brickell & New Bohemians at Kessler Theater
There’s certainly a case to be made that Edie Brickell and her New Bohemians cohorts were the driving force behind Deep Ellum’s ’80s and ’90s emergence as a alternative music hub thanks to the international acclaim earned by their smash singles “What I Am” and “Circle Of Friends,” but in recent memory, the woman who replaced Art Garfunkel as Paul Simon’s better half has mostly been spending her time collaborating with comedian Steve Martin for on- and off-Broadway successes. Here, though, she joins back up with her initial partners in crime for a showcase sure to draw old Dallas music heads out from the woodwork. Perhaps fittingly considering that this set isn’t exactly filled with spry chickens any longer, there’s an early show to go with this later Friday night one, too. — Pete Freedman

Sarah Jaffe at The Globe at AT&T Discovery District
Dallas indie music darling Sarah Jaffe has been crafting some of the best music of her career in recent years, which makes her quite the coup scored for kicking off the new Downtown Dallas concert series called Concerts In The Globe, which offers free showcases within the stunning art-piece-meets-stage known as The Globe within AT&T’s still-new $100 million entertainment complex. Parking at 1212 Jackson Street is also free for this offering with validation offered following a purchase of any of the many amenities provided within the district. Expect more monthly offerings along these lines to follow — including a next-day Sunday showcase of country musician Mason Lively in the same space. — PF

Lucki at Trees
At age 23, this Chicago-based rapper is a young lyrical prodigy. He first received acclaim with his debut Alternative Trap mixtape when he was just 17 years old, and fans have since been able to watch him evolve and score big collabs with the likes of Chance the Rapper, FKA Twigs and Danny Brown. Talk about 4Lifers. — FT

Rise Against at South Side Ballroom
Real punk rockers advocate for human rights, environmentalism and political activism — and the multi-gold and platinum Rise Against live up to that ideal well. This past June, the band dropped its ninth album, Nowhere Generation, 20 years after issuing their debut album. If you’re frustrated with the state of the country, screaming the lyrics to the new disc’s title track alongside other fans at South Side Ballroom probably won’t solve anything, but we bet it’ll feel good! — FT

Tune-Yards at Tulips FW (Fort Worth)
Wonderfully quirky and inventive, this Oakland duo combines lo-fi, world beat and experimental folk elements to create a vibrant sound that acts as the vessel for its introspective lyricism. Exploring subject matter such as white privilege and gender identity, Tune-Yards packages life’s dilemmas into a brightly colored box. And they put their money where their mouth is, too, as $1 per ticket sold at this concert goes to the Ella Baker Center for Human Rights, which organizes with Black, Brown and low-income people to build power and prosperity. — FT